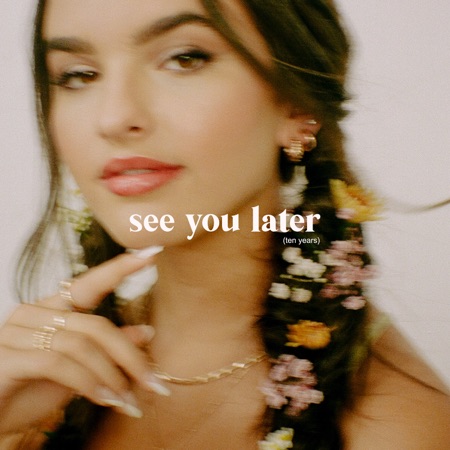 For many people, TikTok has become a digital destination to which one can escape for a few minutes (or hours) of mindless entertainment. The social media platform may seem to provide nothing more than funny animal videos, cooking inspiration, or a new dance to learn. And yet, some industrious individuals have found a way to capitalize on the platform’s vast user base to advance their lifelong dreams. Among them is 17-year-old singer-songwriter Jenna Raine, who has amassed a TikTok following of over 1.4 million followers at the time of publication. Her latest single, “see you later (ten years)” has millions of streams, landing it atop Spotify’s Global and United States Viral Charts.

The story behind this hit song is evidence enough of the power social media can have in shaping the future of the music industry. At the age of 14, Raine’s songwriting instructor challenged her to write 100 songs in order to hone her craft. While it took a few years for Raine to accept the challenge, she decided at the beginning of 2021 that this was exactly the type of content she needed to set her apart in the vast TikTok landscape.

She said to herself, “You are going to write those 100 songs. Finally, you’re gonna do that. And you’re gonna make it a series, you’re gonna make it a kind of a fan experience for everybody.” While it took some time for this songwriting experiment to pay dividends, a follower’s suggestion for song 45 to be about “the right person, wrong time” provided the inspiration for “see you later (ten years).” Ultimately, it was Raine’s ability to connect with her fans on TikTok that allowed her to write what she called “the first song to really show who I am and who I want to be as a singer-songwriter.”

Raine’s engaged and eager fanbase is not merely the product of algorithmic luck. Instead, it is the result of hours of hard work on Raine’s part, who has been creating content on the platform since the summer of 2019. When asked about how seriously she takes TikTok, Raine said, “TikTok is like an everyday thing where I’m trying to think of what’s the next step, what’s the next video, what do people want to hear, what do people want to see? It’s kind of something that has somewhat turned into a job.”

Such a process requires hours of dedicated and purposeful effort each day. While others may simply scroll through their “For You” pages and passively enjoy different kinds of content, Raine says she is constantly wondering, “how can I make this trend me and different from what everyone else is doing?” While this interactive approach to content curation and songwriting has proved to be very beneficial to Raine, she said, “It really is so much harder than people think it is.”

Beyond providing ideas for new songs, Raine’s clever use of social media has also furthered her personal artistic goal of connecting with her supporters in a way that was not possible a mere ten years ago. When she released “see you later (ten years),” Raine said, “There was a huge increase in people following me on Instagram. And I think that was because the song made people realize, ‘Oh, this is a singer-songwriter and I want to be one of the first people to discover her.’”

Armed with this acute knowledge of her fans’ motivations, Raine made every effort to entertain her fans, posting comedic videos as well as new songs, always with an affinity for creating relatable content. It was this relatability that not only allowed Raine to create a rapidly-growing, very positive TikTok page but also helped every fan to feel as though they were a part of Raine’s journey. “My goal is to make my supporters feel like family,” Raine said.

As for what lies ahead for Raine, she plans on releasing music early next year, which she is creating with her “dream collaborator” Ryan Tedder, a record producer who has worked with the likes of Taylor Swift and Adele. Raine also hopes to get back to performing live as soon as possible, so she can finally connect with her fans without the barrier of a screen. She said, “I think once I perform ‘see you later’ live for an audience that knows it, it will be like, ‘wow, maybe I’ve made it.”