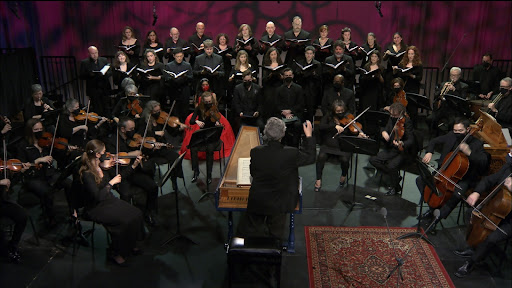 From the moment he stepped out onto the stage, Pearlman took advantage of the intimate acoustics of the recording stage at Calderwood, highlighting the instrumental and solo movements in Part I. When it was time for the chorus to rise, the quiet low registers smoothly facilitated the transition. Pearlman’s unique interpretation featured a mixed voice set, dispersing alto-tenor and bass-soprano placements and thereby unifying the chorus into one voice. He held out on splitting the voices until later songs like “For unto us,” where the altos served as the bass line to the sopranos in their arpeggio runs. The staccato runs characteristic of mass choral music were present throughout, starting with the sopranos and reverberating through the basses. These magical moments really shone in the large-scale pieces like “Hallelujah” and “Worthy is the Lamb.”

Just like Pearlman built up the polyphony in the choir, he immersed the audience in the baroque music by building up the melody from a singular instrument to the entire orchestra.

A master of multitasking, Pearlman also sat down to play the harpsichord, initiating a game of call and response with the trilling violins in “Overture.” He also multiplied the polyphony in the orchestra, skillfully conducting the complex fugue-like variations on a theme in songs like “And with his stripes we are healed.” Staying true to the spirit of baroque, Pearlman kept the violins busy, relying on the cello for deeper, foundational beats. The period instrumentation made the melody a transformative experience of its own, melancholy in the minor keys and joy in the tremolos, and all the silent moments in between were so full of meaning that the audience could only hold their breath in anticipation. By facilitating the tenuous balance of all of the moving parts, Pearlman brought “Messiah” to life and made it his own by putting the baroque orchestra into direct conversation with the chorus.

Having set up the accompanying parts of the orchestra and chorus, Pearlman gave the soloists the platform to truly shine.

Tenor Aaron Sheehan was first to take the stage. He riffed off the modulating strings in “Every valley shall be exalted” and “But thou didst not leave his soul in hell.” Sheehan narrated the intrigue, embodying the tension in “the coming judgement” and “Christ’s Death and Resurrection” movements. Pearlman played on this storytelling, combining the incessant warning of “All we like sheep have gone astray” in the forlorn duet chorus as well as the galloping allegro forte in the cellos. Likewise, the deep notes of bass-baritone Kevin Deas highlighted the impending gravity of songs like “For behold, darkness shall cover the earth.” Deas was loud and intense like the fortissimo music in “Why do the nations so furiously rage together,” and then hopeful and evocative in the “The Day of Judgement” movement, voicing the road to salvation through faith. In these moments, the strings took the backseat, only serving as a backdrop to accent the echoing beats for the pivotal narrative moments. The orchestra also dedicated this movement to celebrating trumpet soloist Jesse Levine. He came out to Deas’ call “The trumpet shall sound,” and indeed, it sounded triumphant like the hopeful message in Dean’s solo, eliciting standing ovations from the audience, performers, and Pearlman alike.

Soprano Maya Kherani came out last, stunning in her red ensemble, her expressive, bell-like vocals sparkling brighter than her jewels. She demanded attention from the start, her Arioso showcasing an impressive ability to glide in and out of diminuendos. Her stable vibrato complemented the chorus, keeping the prolonged notes melodical as she graced the crowd with her dazzling smile.

Although every soloist held their own, the master of “Messiah”’s emotional oration had to be countertenor Christopher Lowrey. Lowrey capitalized on the linguistics in his solos, like in “Christ's Passion” movement, where the phrase “He was despised and rejected of men” was sung as breathy ejectives. This wordplay was accompanied by an equally passionate theatrical performance on Lowrey’s part, maintaining eye contact with the audience and the appearance of scorn. This dramatic interpretation was almost as impressive as Lowrey’s unique voice, which had a rare mezzo-soprano quality that stood out from the rest.

Nothing says holiday like revisiting a timeless tradition. Boston Baroque’s “Messiah” is both conservative of baroque qualities as well as innovative in Pearlman’s conducting, and it makes for an entertaining spin on Handel’s tradition.