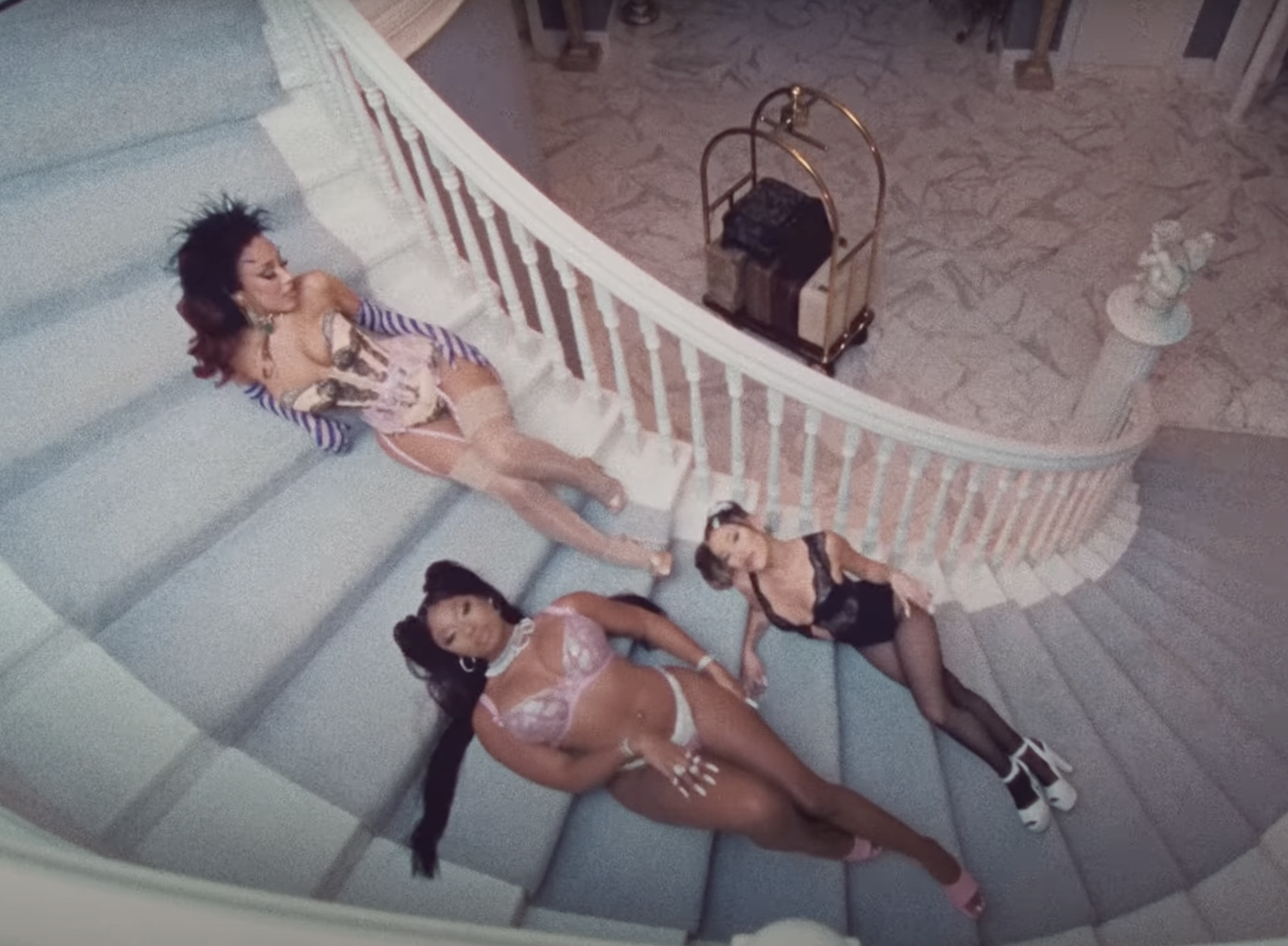 Ahead of dropping a deluxe edition of her latest album, “Positions,” Ariana Grande released the music video for her latest remix collab, “34+35,” featuring Doja Cat and Megan Thee Stallion.

The video opens with a shot of Grande alone by the side of a pool, swans swimming by in the silence, before the camera pans back and her fellow artists appear. The next few seconds define the rest of the video: opulent but deserted scenery, sultry stares at the camera, and desultory choreography as no one takes themselves too seriously. It’s a vibe and an aesthetic free of any particular narrative, which perfectly fits a song that was supposed to be “ridiculous, so funny and stupid,” as Grande described it on the Zach Sang Show.

Next, the iconic trio hang out in lingerie in an empty hotel, quickly graduating from lounging by the side of a pool to dancing by a luggage cart to reclining on a staircase. All the while, Grande lip syncs the chorus, crooning “Can you stay up all night?” to the camera. While her voice is beautiful throughout, it’s a shame Grande’s portions of this remix are not markedly different from the original and that “34+35” isn’t more vocally demanding. For a singer as talented as Ariana Grande, her shift away from belts and traditional singing in favor of breathy speak-singing is disappointing.

The video continues with a verse from Doja Cat as she raps at the camera while lounging on a sofa in front of two dalmatians, intercut with the three artists dancing in a bathroom. It’s wacky and perfectly compliments the light-hearted nature of the single.

This verse ends abruptly with a cutscene. In the style of Grande’s “Legally Blonde” skit in the middle of her “thank u, next” music video, the song pauses so Grande can order various desserts for herself and her friends over the hotel room intercom. It’s off-kilter and tongue-in-cheek, and while it doesn’t quite manage to be funny, it further supports the video’s whimsical tone.

As Ariana Grande, Meg Thee Stallion, and Doja Cat now hang out in a bedroom, drinking champagne and eating candy, the video begins to feel a bit like a cross between an upper class lifestyle and a girls’ slumber party fantasy filtered through the male gaze. Since the video’s substance is its lack of substance, it struggles to stay engaging when there are only so many ways for twenty-something-year-old artists to make eyes at a camera.

The next verse follows the trio dancing on the bed, spliced with Meg Thee Stallion vibing in an empty bathtub. The lack of choreography given to the artists becomes painfully clear by this point in the video, but Meg Thee Stallion makes up for it with how hard she owns her verse.

The trio return to the bedroom and film each other with a retro camera as the song reaches its iconic ending that reveals just how many people, when presented with a simple sum, will choose not to compute it. As Grande declares in this version, “Math class / Never was good.” The video ends with a meta shot of the three stars of the video watching themselves in videos they supposedly took before a continuation of Grande’s difficulties in attempting to order dessert that screams “look how relatable I am.”

The music video for the “34+35” remix is pretty and mindless, and if you’ve seen any of Grande’s other music videos, you’ve basically already seen this one too. But since it’s for a song about sex that has no other discernable narrative, it works: After all, it’s just a bit of fun.