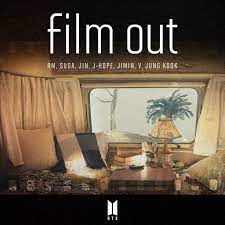 The K-pop boy band BTS released “Film Out,” the lead single for their upcoming Japanese compilation album “BTS, The Best,” on April 2. BTS announced the song was the main theme of the soundtrack for the Japanese film “Signal: Long-Term Unsolved Case Investigation Team,” continuing BTS’s long tradition of lending their voices to Japanese movies and TV series. Lead vocalist Jungkook worked closely with J-pop group Back Number to produce “Film Out,” and that powerful collaboration resulted in an unprecedented style of ballad for BTS.

In an interview with Billboard, BTS said that the melody and lyrics have “the power to touch many people’s hearts.” Indeed, the song’s impact lies precisely in the combination of the two, since the production’s complexity narrates the intricate story behind the lyrics.

The song begins with a simple piano chord progression whose minor keys set a melancholy mood for the introduction. The threadbare sonics seemingly fade into the background as Jungkook’s clear voice fills the silence. Likewise, that very same dynamic is expressed in the lyrics: “You, in my imagination” regresses into “You suddenly disappear” as Jimin sings about the emptiness of love’s illusions. The tempo suddenly rises and transitions the song into the chorus, which beautifully contrasts Jungkook’s higher tone with V’s lower register. “I feel you with every burst of pain,” V concludes the chorus, just as a suspenseful rest pierces the song’s ambience as well. The rap line (RM, Suga, and J-Hope) join the vocal line (Jin, Jimin, Jungkook, and V) in a series of ad libs that split the dulcet chorus from the metrical rap verse, effectively differentiating the melody from the rhythm.

The mellow instrumentals fade and give way to a steady tempo just as RM’s rap verse kicks in. The cadence of his punchy bars dilute the melancholy ballad with interrupted phrases like “no light, or water,” and “rootless, leafless.” That caesura is also present in his flow, seeing as he often pauses for air in between two consecutive words, echoing the way his lyrics chunk into arbitrary phrases. Another chorus skillfully acts as a buffer between RM’s lines and the next rap verse, delivered by Suga and J-Hope, as Jin’s higher range starkly contrasts with the rappers’ lower registers. “The way you are / Kind hearted, always smiling, but…” Suga calls out to J-Hope, who responds with “If tears can be measured, it took this long.” These rappers’ flow is more fluid, not halting even when Suga hands over the mic to J-Hope in the middle of the phrase, highlighting the continuous flexibility of the verses.

That unification of lyrics and flow carries over into the acoustics for the rest of the song.

Once again, an intervening chorus follows the rappers and transitions the song into the bridge. The soulful guitar tracks — contributed by Back Number’s Iyori Shimizu — harmonize with Jin’s high-pitched ad libs as he builds up the first part of the bridge. “The fragrance I smell, the warmth I feel,” Jimin concludes in the second half of the bridge, reflecting the desire to hold on to the visceral memory of love for “As long as it lasts.” These lyrics are very sorrowful, painting vivid images of the pain of remembering a lost love. There is a disunion of mind and body in the lyrics; Those fragments of memories that cause the illusion of a lover’s presence come into conflict with what is real and what isn’t. Likewise, the song crescendos with that heart-wrenching buildup coming to a climax with a dissonance of symphonic violins and guitar chords, giving the illusion of cacophony.

The track descends into its finale accompanied by a hint of guitar, but otherwise the outro is devoid of all sound. It ends just like it began — highlighting the singers’ voices and deemphasizing the soft and breathy background instrumentals — an approach that also reveals some hidden back vocals in the process. That complex and full-circle arc makes for an emotional catharsis that brings the narrative intensification of the lyrics to life. By stepping outside of their comfort zone and getting involved with the creative process of songwriting, BTS brought that powerful combination of melody and lyrics to fruition, giving their vocal prowess a chance to truly shine.