Fauci Talks Successes, Next Steps in the Nation’s Pandemic Response on HSPH Panel 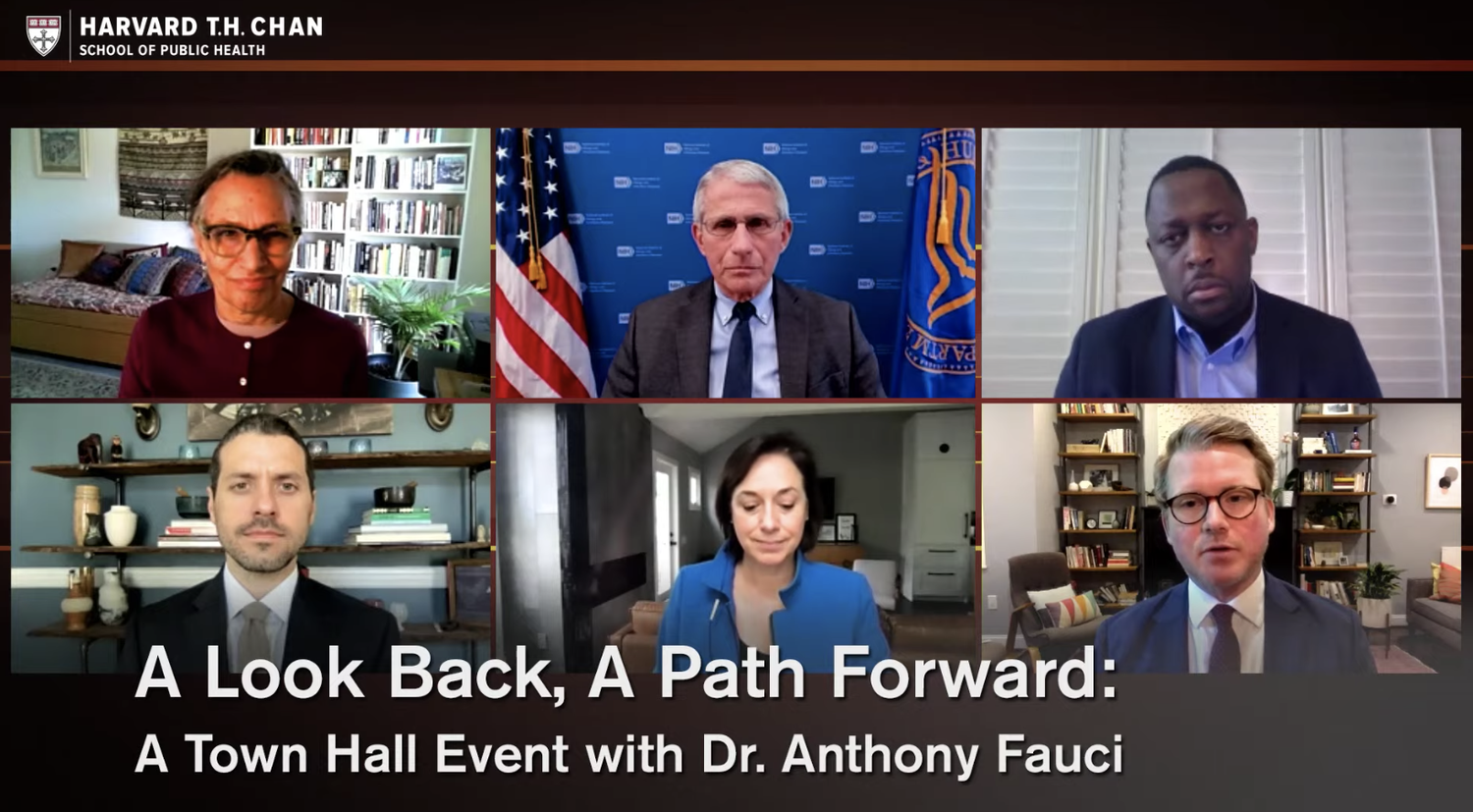 U.S. Chief Medical Advisor Anthony S. Fauci discussed the current state of the nation’s response to Covid-19, as well as where the country goes from here, during a virtual town hall event Monday with the Harvard School of Public Health.

Moderated by Axios Health Editor Sam Baker, the discussion featured Karen B. DeSalvo, chief health officer of Google Health, YouTube director and global head of healthcare and public health Garth N. Graham, and HSPH professors Michael J. Mina and Mary T. Bassett. This event is the first of a three-part series on the current state and future of the pandemic hosted by HSPH, entitled “COVID-19: A Dose of Reality.”

HSPH Dean Michelle A. Williams said during the panel she is hopeful based on the success of the vaccine rollout so far, but acknowledged the significant obstacles still facing the nation in tackling the pandemic.

“Right now, I’m only cautiously optimistic,” she said. “Why? Because we’re in a race against fast-spreading variants and vaccine hesitancy, because we’re grappling with the politicization of vaccines, and because we are running up against misinformation and persistent societal inequalities.”

Upon welcoming the five panelists, Baker posed questions regarding the country’s next steps in combating the remaining issues of the pandemic.

Fauci noted the importance of an efficient and effective vaccine rollout during what he termed a “precarious” stage of the pandemic before the U.S. can reach herd immunity.

To continue tracking the spread of the virus, Mina added it is “absolutely essential” to make Covid-19 tests widely available and convenient to the general public.

“To this point, still, we have barely seen any adaptation in our regulatory pathways to ensure that there's accessible and equitable testing that is giving results in a timeframe that's actually commensurate with what’s needed for this pandemic,” Mina said.

“If you make these tests as accessible as your toothbrush, people will test themselves,” he added.

According to Fauci, the Centers for Disease Control and Prevention will soon release updated guidelines for mask-wearing and other scientifically-backed, “common sense” public health measures.

The panelists also addressed how the subject of public health commanded the attention of a worldwide audience throughout the course of the pandemic.

According to DeSalvo, the collaboration between public and private sectors was crucial in disseminating information to the public and mobilizing what she described as an “extraordinary” response to the pandemic. She added this is especially notable given the long history of underfunding of public health infrastructure in the country.

“It's going to take all of us, not only in this pandemic, but also going forward to make sure public health has the tools and the strength to continue to protect the public,” DeSalvo said.

The panelists also touched on the pervasive issue of health inequity both within and beyond the pandemic.

“That's true today as it has been for the very early months of this pandemic,” she added.

Fauci said he believes the nation should continue addressing health disparities as the country moves forward.

“It almost has to turn around — what we have to admit which is true — the deep profound racism that has brought us to this point over so many, many, many years,” Fauci said. “That’s the thing we really got to get that spotlight on and don’t let that spotlight get dim when we’re two years out from the outbreak.”

Though he acknowledged the challenges that lay ahead, Graham argued the pandemic response opened a window to demonstrate society’s fundamental need for public health to the nation.

“I will say that it is an opportunity for us to continue to think about collectively how we move forward and empower communities, empower individuals, and really make this issue of public health really public, and out of the silos of our journals and textbooks and into people’s hearts and minds,” he said.