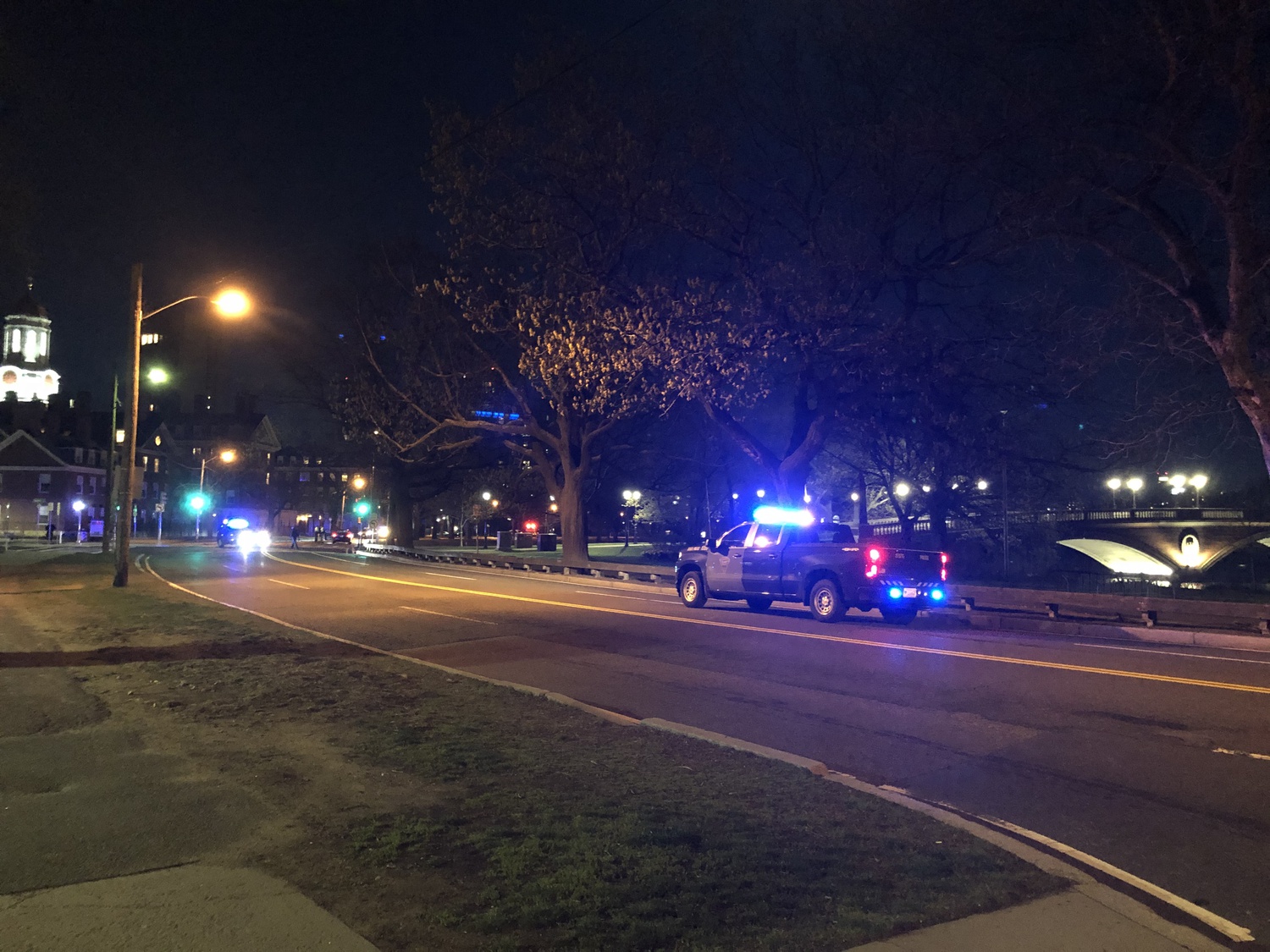 A driver struck a pedestrian on Memorial Drive near Dunster House around 9 p.m. Monday, resulting in serious injuries to the pedestrian. By James S. Bikales
By Raquel Coronell Uribe, Crimson Staff Writer

A driver struck a pedestrian on Memorial Drive near Dunster House around 9 p.m. Monday, resulting in serious injuries to the pedestrian.

The victim — a 28-year-old woman from California who lives with family in the Boston area — was transported to Beth Israel Deaconess Medical Center, where she remained in critical condition as of Wednesday.

The driver, a 29-year-old woman who lives in Brookline, was not injured in the collision, per an emailed statement from David A. Procopio, a spokesperson for Massachusetts State Police.

The facts of the crash remain under investigation by Massachusetts State Police, with assistance from its Collision Analysis Reconstruction Section and Crime Scene Services Section.

“Preliminary investigation suggests the vehicle was eastbound on Memorial Drive in the area of the intersection with DeWolfe Street when the pedestrian entered the roadway in the area of the Weeks Footbridge and was struck,” Procopio wrote. “The driver remained on scene.”

Procopio declined to reveal the names of the parties involved, but confirmed neither are Harvard students.

Cambridge City Councilor Jivan Sobrinho-Wheeler weighed in on the crash on Twitter, arguing that the incident demonstrates why the roadway needs increased safety for non-drivers.

“The details are being investigated, but it's clear Mem Drive needs improvements from [the Massachusetts Department of Conservation and Recreation] to prioritize people over cars,” he wrote.

“A coalition of groups are calling for fewer cars and more pedestrian space, green space, and bike improvements on Memorial Drive,” he wrote. “DCR is planning for a redesign on Memorial Drive, and I hope they listen and look forward to being part of the process.”

The Memorial Drive Alliance’s demands include replacing two lanes on the road with a bi-directional bike path and planting trees along Memorial Drive to provide pedestrians and bicyclists with shade.

“We have a shared goal of making the Memorial Drive Parkway a beautiful, safe, resilient, and vibrant green corridor for the enjoyment of many generations to come,” the group’s website reads.

A DCR spokesperson wrote in an emailed statement that a multi-year project to improve the roadway is underway, and now in its third phase. The organization plans to remove two of the lanes for cars and replace them with a bicycle lane and landscaping.

The DCR is taking Green Cambridge and the Memorial Drive Alliance’s concerns into consideration, among dozens of local stakeholders, the spokesperson added.