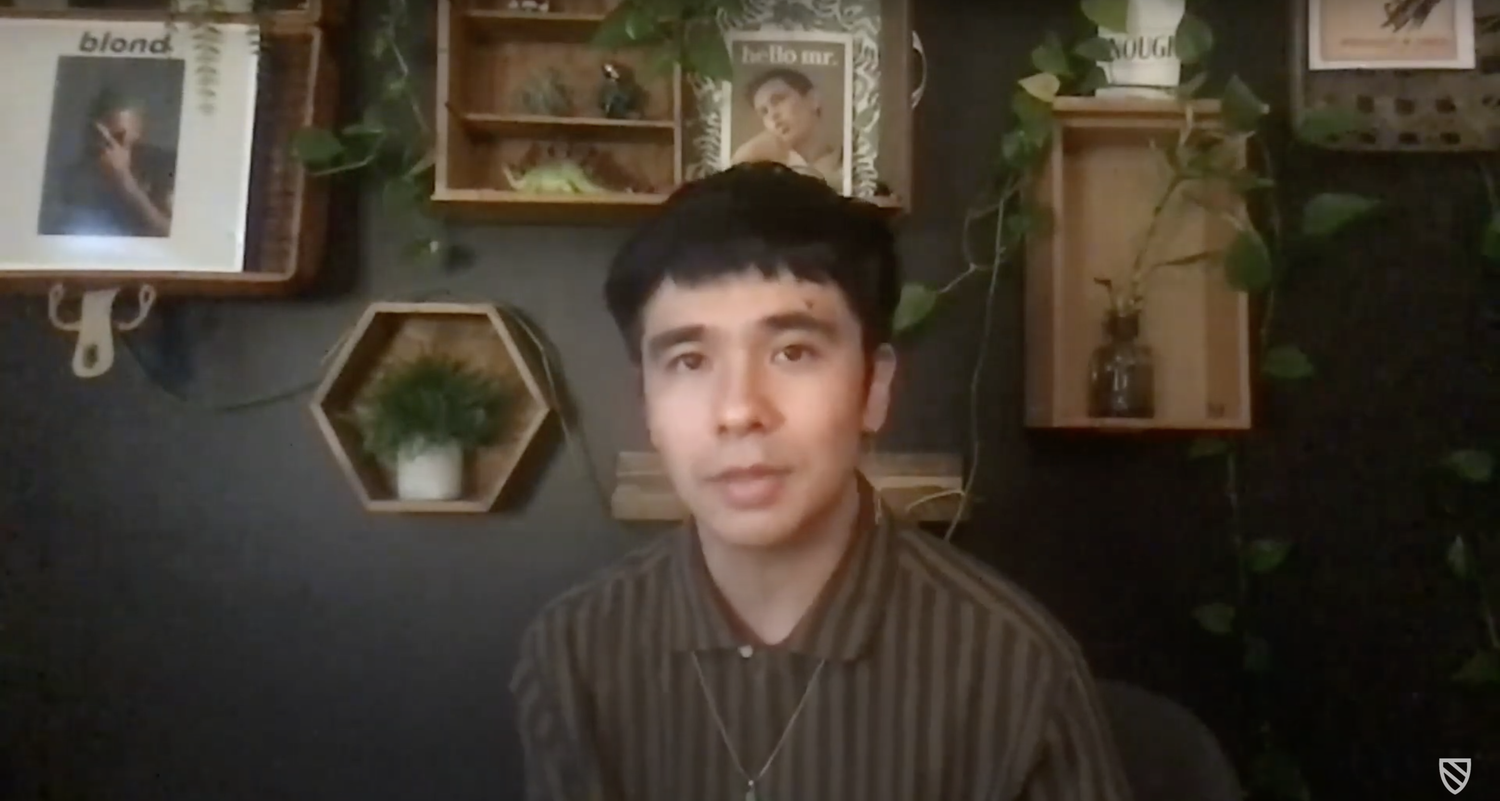 On the Zoom screen, acclaimed writer Ocean Vuong donned a pair of tortoise shell glasses. In the background was a geometric array of potted plants hanging from his wall. He opened the virtual conversation with the ringing of a bell, a meditative gesture that prompted listeners to “call back” past versions of themselves. He read a poem titled “Not Even” from his forthcoming collection to the faceless audience of over one thousand participants. One particular line resonated powerfully:

“What if it wasn’t the crash that made me, but the debris?”

Though people often possess a deep aversion to the past, Vuong does not yield to this impulse. The enduring resonance of his texts emerges from his willingness to continually revisit the past as a space of reclamation and dialogue.

“In the Western mythos, we’re often told that we should forget the previous versions, the younger versions, of ourselves,” Vuong said. “But I actually think it’s important to honor that person, and to invite that person into the space of making, because often it was their great epicentric moment — that realization — that brought us here.”

Vuong, a Vietnamese-American writer and associate professor at the University of Massachusetts Amherst, probes the complexities of post-war identity, sexuality, history, and language in his writing. A recipient of a 2019 MacArthur “Genius” Grant and a Ruth Lilly Fellowship from the Poetry Foundation, he has established himself as a towering voice in contemporary literature. His literary corpus includes the poetry book “Night Sky with Exit Wounds,” winner of the T.S. Eliot Prize and the Whiting Award; and his debut novel “On Earth We’re Briefly Gorgeous,” an instant New York Times bestseller that A24 is currently adapting into a film.

Initially scheduled to take place last year, the virtual conversation — hosted by the Harvard Radcliffe Institute for Advanced Study — was postponed due to the onset of the Covid-19 pandemic. English Professor Ju Yon Kim, who moderated the conversation, said she felt they “were meant to gather here” in the present moment, referring to the Atlanta spa shootings that occurred on March 16. That evening, eight were shot and killed — six of whom were women of Asian descent.

Vuong is often described as a seminal voice in contemporary diasporic writing. For the poet and novelist, however, it is critical to interrogate what that term even means — the very concept is, according to Vuong, fraught with unwieldy expectations. He noted that when he first began writing, some writers of color around him saw diasporic writing as tired, or worse, a method of exoticizing one’s own cultural hardship to pander to the white gaze.

“There was a kind of smugness in transcending historical artifacts, a historical subject,” he recalled. “The smugness came out of this triumph of finally eliding white expectations of performing pain.”

According to Vuong, however, the perception of diasporic literature as performative and contrived puts writers of color in an impossible position. The response of many writers of color when faced with this reality is to excise diasporic or historical content from their writing entirely. For Vuong, this very form of “post-diasporic” writing is itself a form of subordination, a method of narrative policing fueled by a hyper-awareness of the white reader.

“I saw it with great grief, that at the end of the day, even though it was an oppositional position, it was still a position that was subordinate — or concerned with — the white gaze by negation,” he said.

Vuong suggested that the misguided perception of diasporic writing as an “exhausted” field is perpetuated by the unequal reception of particular types of literature.

“I think it could be because we’ve subliminally internalized that there could only be one of us, it could only be one of us writing about one thing,” he said. “And when someone executes it, they’ve claimed it,” he said. He emphasized that the way publishers approach the stories of writers of color often contributes to perpetuating this toxic dynamic.

The poet and novelist firmly rejects the belief that one writer of color can “claim” a particular strand of marginalized experience or feeling.

Vuong conceded there will always be ghosts sitting on writers’ shoulders. He acknowledged this is particularly true for those approaching their work from experiences of marginalization and violence. According to Vuong, the antidote to the noise of these contending inner voices is to “privilege your sense of bewilderment and wonder.” He urged writers to engage questions — ones that are elusive and terrifying, yet also serve as a core impetus to write. When writing toward an answer to these questions, Vuong contends, outer voices gradually fall away.

“When you’re confronted with such a potent question, you quickly forget those voices, you quickly forget this idea of a white gaze, because it’s so small compared to what you’re heading towards,” Vuong said. “You’re heading toward this horizon that only you can answer, or only you can come close to. And so those things, they become so abstract and minute, because your questions are so much bigger than that.”

Vuong’s conversation served as the opening of a series of virtual programming at the Radcliffe Institute titled “Gender Rights in the Time of Pandemic.” Featuring multiple guest speakers, the session explored the process of organizing for gender rights across the world, particularly in the wake of the Covid-19 pandemic.