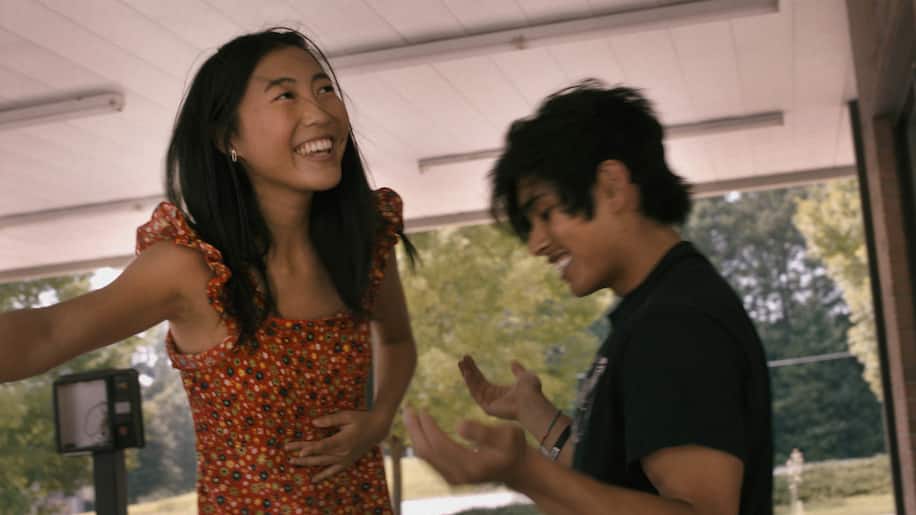 Shirley Chen ‘22 discovered her love of theater through high school plays — but that happened long before she ever acted in one. As a kid, she’d sit in the audience of her older brother’s performances, awestruck by the magic of the show and the bonds between its actors.

“Seeing all the cast members in all their wardrobe and their sweaty faces coming out, and people are handing them flowers,” Chen said, “they've done this together and really connected, and I felt that connection to them as an audience member. There's huge camaraderie... I was always drawn to that.”

This camaraderie is explored and tested in writer-director Danny Madden’s 2021 coming-of-age film, “Beast Beast.” In it, Chen stars as Krista, an aspiring actress navigating friendship, creativity, and loss in high school. Though the film just debuted in theaters in April, it’s a long-time labor of love for Chen, who first auditioned for the role of Krista as a student at the Los Angeles County High School for the Arts (LACHSA).

During her time there, Madden and his partners at production company Vanishing Angle sent students a casting call for a short film called “Krista” that they were shooting on the LACHSA campus. “Krista” eventually premiered at South by Southwest, earning the first annual Vimeo Staff Pick Award as well as an acting accolade for Chen. Actor Alec Baldwin signed on to executive produce a feature adaptation of the short, which became “Beast Beast.”

Talking to Chen, it was hard not to notice the similarities she shares with the fictional Krista — both are upbeat, bubbly, and deeply invested in the power and craft of acting. This common ground isn’t a coincidence; after shooting “Krista,” Madden wrote the feature-length part specifically for Chen, and details from her training at LACHSA are scattered through the film. Even the title is taken from the “beast, beast, ready to act” chant that Chen and her classmates did before acting exercises.

The summer after her senior year, Chen flew to Peachtree City, Georgia, where Madden and his brother Will (who also stars in the film) grew up, to shoot “Beast Beast.” Just as her character bonded with new student Nito (Jose Angeles) and her theater friends onscreen, Chen grew close with her costars and the crew. She fondly recalled taking golf carts to run errands around town with Angeles when they weren’t shooting.

“It was nice because all the film crew and all the cast were always around each other,” she said. “It wasn't just like fun filming; it was also a family and a summer camp feel that was really special.” During the shoot, Chen even stayed with Madden’s parents in his childhood home. Chen highlighted the “Beast Beast” production as her favorite acting role ever, “unlike anything I’ve ever experienced.” At the end of the summer, it was Madden who drove her to the airport to head off to Harvard.

Chen’s familiarity with the crew and past experience working with Madden helped her approach some of the film’s heavier scenes, as “Beast Beast” delved into issues of grief and gun violence.

“There was already that foundation of communication and language going into ‘Beast Beast,’” she said. Some elements of her character’s arc, she explained, were daunting — for example, she had cried for auditions or acting classes before, but never for a shoot where she’d need to repeat takes. “It was really important that what I was doing was real and emotional, really visceral,” she said of these emotional scenes. “Because I was in the weeds, and it had to be good. That was a pressure that I knew going into it.” She tackled this challenge early: On the first day of production, they filmed a scene where her character cried. “I knew that if I just got through that first day, I could do it for the rest of the movie,” she explained.

The cast rehearsed thoroughly beforehand, and Chen found a routine to get into the right mindset: She listened to music that fit the character’s headspace and curled up with a pillow from Krista’s bed or looked through photos in the set for Krista’s bedroom.

“That really helped me access and get to the point that I needed to, so that once I arrived on set, the crew was just silent, very caring, because they knew I was in this very emotionally vulnerable place,” Chen recalled. Before one particularly heavy scene at the emotional climax of the film, Chen went through items from a care package one of her friends had sent her and listened to Randy Newman’s “You’ve Got a Friend In Me.”

When stepping into Krista’s shoes, Chen was also able to draw on their shared passion for acting, which Krista uses as an outlet to express and process her emotions throughout the film. Chen, who moved to Los Angeles from Washington in middle school to pursue professional acting, highlighted Krista’s connection to performance as one of the most relatable, and grounding, elements of her character.

“Once the movie takes a dramatic turn, and she's forced to grow up all of the sudden, I think she's lost for a second of, ‘I don't know what theater means,’... but it ends up being a place of catharsis for her,” Chen said. “Her relationship to theatre — like, the love — is always there. But how she uses it, and what it means to her, changes as she kind of evolves as a person. I feel like that's the same way as it is for me… as I've gotten older, and my life circumstances have changed, I think my appreciation for [performing] has changed. And what I try to do with it, that’s changed. The love has always been the same.”

Chen’s experience promoting the film on the festival circuit was cut short by the pandemic, so she’s experiencing the film’s debut virtually as she takes Harvard classes from home in California. In today’s world, though, she hopes the film’s stories of pre-pandemic friendship will speak to audiences even more deeply.

“It's so much fun to watch all the scenes with Jose and his friends that I never got to film and I wasn't on set for,” she said, “Watching them just, like, blow smoke at night in a parking lot makes me miss my friends. So I hope that's something that people, especially now in quarantine, can really resonate with, and [that “Beast Beast”] can remind them that life is great, and friends make you feel alive.”

— Staff writer Harper R. Oreck can be reached at harper.oreck@thecrimson.com.