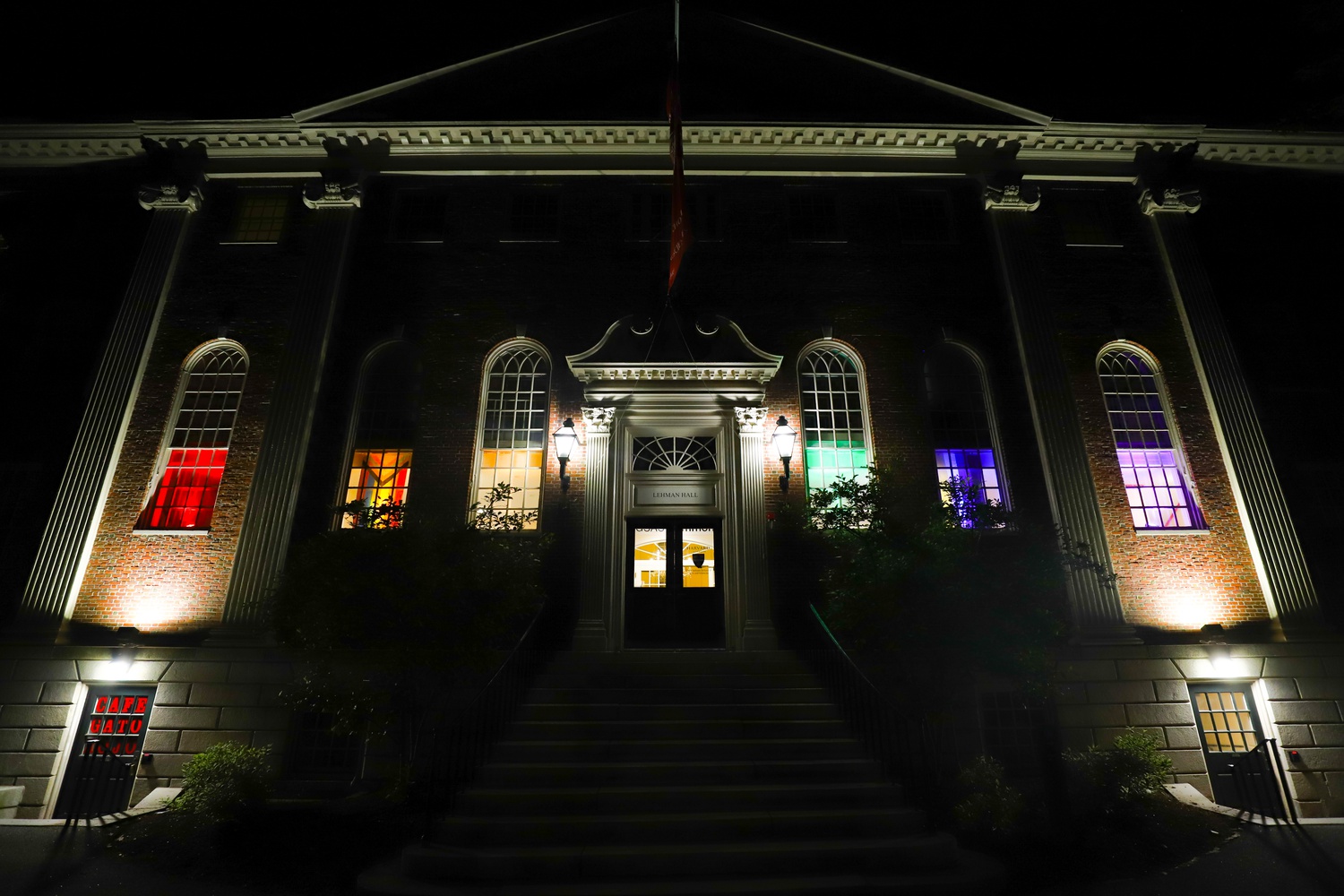 The University's expanded Pride Month programming this year included the illumination of the Graduate School of Arts and Sciences's Lehman Hall in rainbow colors. By Simon J. Levien
By Isabella B. Cho, Crimson Staff Writer

Harvard significantly expanded its University-sponsored programming in honor of Pride Month this year, drawing praise from BGLTQ affiliates who said they hope the momentum of expansion continues into future years.

The programming included Harvard’s first-ever University-wide Lavender Graduation, the establishment of the Evelyn Hammonds Award for Exceptional Service to BGLTQ+ Inclusion, the illumination of the Graduate School of Arts and Sciences’s Lehman Hall in rainbow colors, and the first-ever Harvard social media post celebrating Pride on the University’s official Instagram account.

Members of LGBTQ@GSAS, the affinity group for BGLTQ graduate students, initiated the formation of a Pride task force in January, reaching out to fellow students and administrators to begin brainstorming ways the University could honor BGLTQ affiliates during Pride.

James G. Evans, the vice president for advocacy at LGBTQ@GSAS and a Ph.D. student in History, said he and other students collaborated with administrators to make two of the institutional milestones happen: the first University-wide Lavender Graduation and the first Harvard social media post commemorating Pride month.

“We wanted this year to be the first time that the University officially recognized both Pride and a University-wide Lavender Graduation,” Evans said. “And so what we decided was best was to roll those two things together.”

Though the College’s Office of BGLTQ Student Life has organized an annual Lavender Graduation for outgoing BGLTQ undergraduates for nearly a decade, this year marks the first in Harvard’s history during which the celebrations were University-wide.

Ashley Cavanagh, a Ph.D. student in Applied Physics who currently serves as the LGBTQ-focused Diversity and Inclusion Fellow at the GSAS Office of Minority Affairs, said the significance of the University’s acknowledgment of Pride was two-fold. While it signaled an affirmation to BGLTQ students that they “deserve to feel special here,” it also paid tribute to the often unsung efforts of students to realize a more inclusive University for BGLTQ affiliates.

“It really shows the folks behind the scenes who are fighting for these things, especially including the folks at LGBTQ@GSAS,” Cavanagh said. “It’s a really significant example of how hard LGBTQ students are working to be acknowledged and be recognized at this University and fight for their spaces here.”

“We worked with student leaders, GSAS administrators, the facilities team, and a photographer to make it happen,” Daniels said. “To our knowledge, the photo of the Center became the first-ever post on Harvard’s official social media channels in honor of Pride Month.”

“Student leaders from the Harvard LGBTQ@GSAS Association approached us to work on this project with them, and it feels great to share this image of inclusion that we at GSAS care so deeply about,” she added.

Some of those involved in the University’s Pride programming said they hope this year’s efforts will serve as a blueprint for future collaboration and advocacy.

Cavanagh said she hopes this year’s work will serve as a “vision for future years” when students can congregate in person and join forces with Pride festivities in the greater Boston area.

Evans, who helmed advocacy for the Pride task force, said he and other BGLTQ student leaders plan to continue working closely with individual units within the University on enacting change.

Some of these future efforts include the promotion of inclusive pronouns in emails in collaboration with HUIT and the formation of a campus-wide LGBT task force with the newly established Office for Gender Equity, according to Evans.

“One challenge that we have with Harvard is it’s incredibly decentralized, which means oftentimes, that there is a lot of verbal support for policies, but it can be challenging to enact those responsibilities because it’s not always clear who is responsible,” he said. “So the idea of institutionalizing what we’re doing with the Office of Gender Equity is to try and overcome that collective action problem.”

LGBTQ@GSAS co-president Daniel A. Arias said he arrived to begin his Population Health Sciences Ph.D. two years ago in the midst of Boston’s “Straight Pride” parade.

For Arias, students’ collective efforts to promote inclusivity at Harvard contrast starkly with the hostility of parade participants.

“I woke up in a new city, and there were hundreds of my newfound neighbors, and they were all very mad at me just for existing,” he said. “It was hard, especially for a queer newcomer, when you’re looking for a sign that you belong and are welcome.”

Arias said that though he acknowledges there is more work to be done in securing institutional support for BGLTQ affiliates at Harvard, the lighting of Lehman Hall and the University’s social media post celebrating Pride serve as an important affirmation.

“We can’t understate the value of symbols. It shows that queerness belongs at Harvard, that we belong, that we matter. And just the simple reminder that you’re not invisible — and that’s how I felt when I came two years ago,” Arias said. “Instead, this is something that’s really beautiful, and it’s worth being seen.”