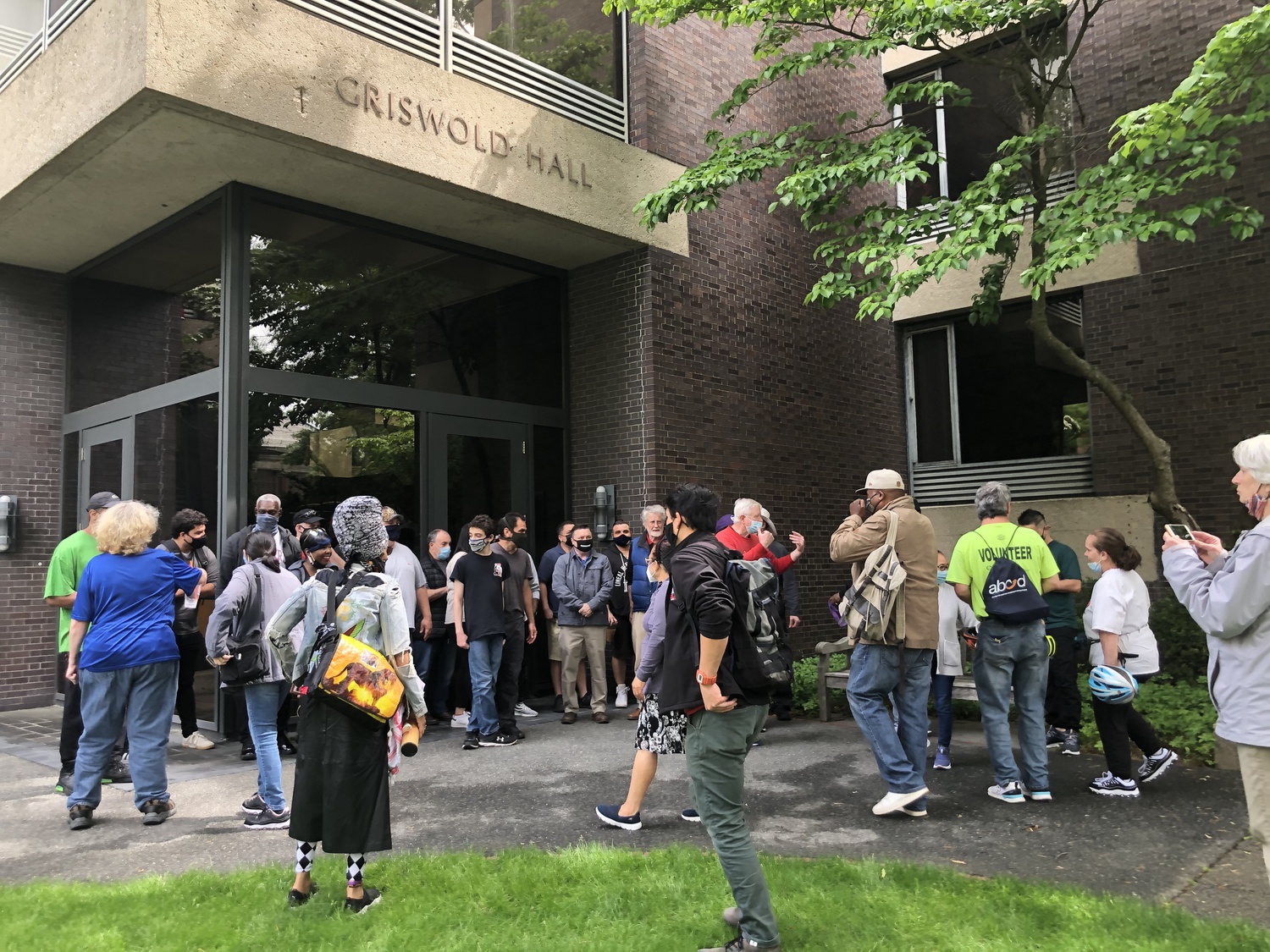 Approximately 30 Harvard dining workers and supporters rallied in front of the Law School Tuesday to protest potential layoffs as the school ends its contract with Restaurant Associates. By Meimei Xu
By Cara J. Chang and Meimei Xu, Crimson Staff Writers

Approximately 30 Harvard dining workers and supporters rallied in front of the Law School Tuesday to protest potential layoffs as the school ends its contract with dining services contractor Restaurant Associates later this month.

In January, the Law School announced that it was terminating its contract with Restaurant Associates and transitioning its food services in-house to Harvard University Dining Services by July 1. UNITE HERE Local 26, the union that represents Harvard’s directly-hired and contracted dining workers, organized Tuesday’s rally in response to concerns that HUDS would pursue a “big layoff” during the transition, according to union organizer Ed B. Childs.

The group marched to Griswold Hall, where union members, shop stewards, and Cambridge City Councilor Marc C. McGovern gave short speeches outlining their concern that the workers could face layoffs as they re-apply for positions after the transition. The rally ended after chief shop steward Eugene Van Buren left a voice message for the office of Law School Dean John F. Manning ’82.

“We have people working for just as long as anyone else at Harvard,” Van Buren said in the message. “We got people working 10, 20, almost 30 years. There’s no need for us to apply for a job that we can do.” 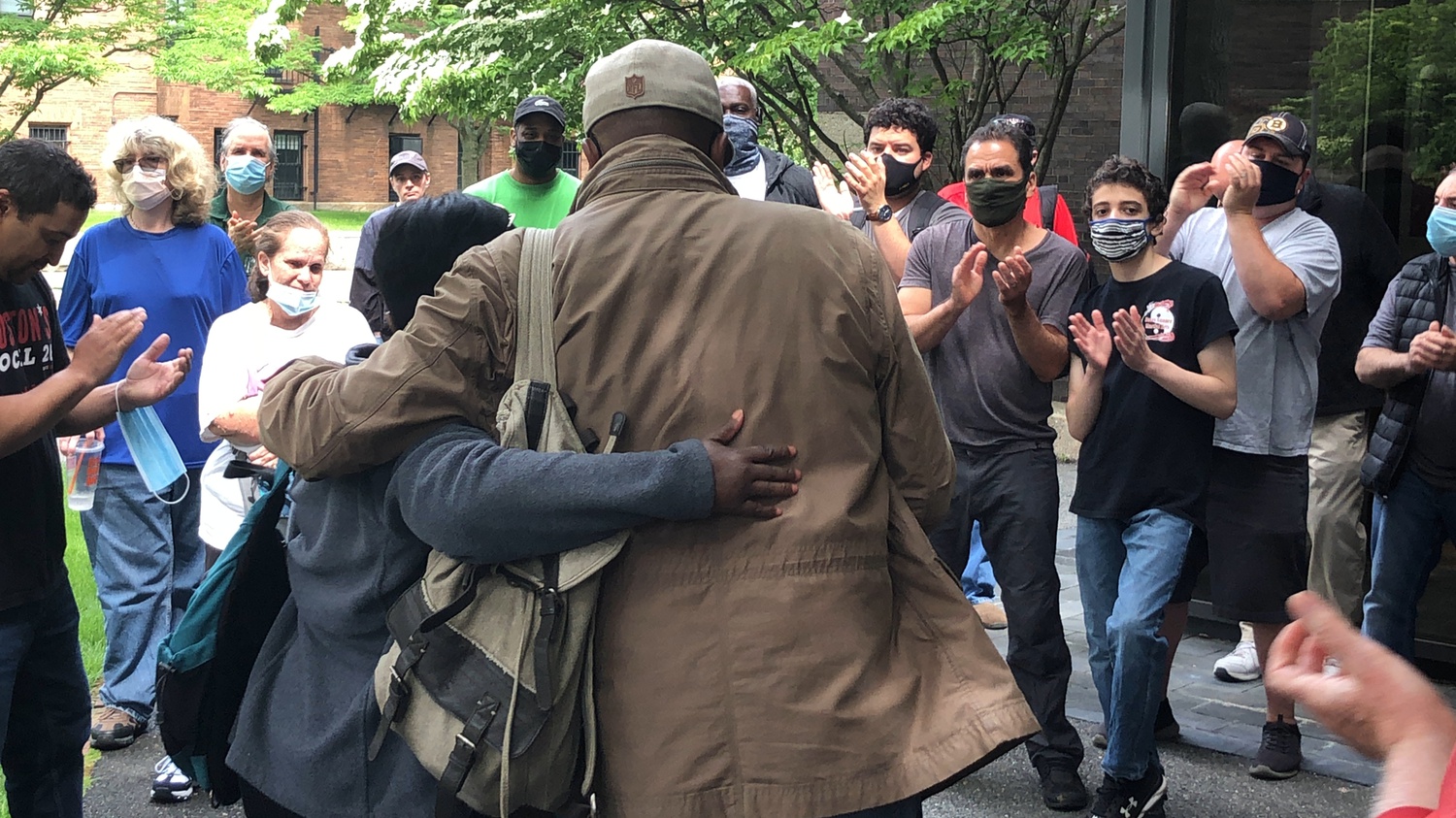 According to Harvard spokesperson Jason A. Newton, HUDS hopes to conditionally offer positions at the Law School before the contract with Restaurant Associates ends July 1.

Restaurant Associates workers at the Law School received an email Wednesday from HUDS detailing next steps in the transition. Employees who want to continue working at Harvard under HUDS will “need to complete the Harvard employment process,” according to the email. In addition, they will need to come to one of three meetings at the Law School, hosted on June 8, 9, and 10. Workers who do not apply within the timeframe will not be considered for HUDS positions.

“HUDS would welcome the opportunity to meet any interested individuals, to talk about how HUDS will be operating the foodservice at HLS, and to complete the formal paperwork required for [the] Harvard employment process,” the email reads. “At the conclusion of the meet-and-greet timeframe, based on seniority and a skills assessment, positions will be offered.”

Positions are conditional “on the ability to pass a standard Harvard background check,” according to the email.

Local 26 chief shop steward Laquiesha N. Rainey said she is concerned the background checks could result in workers being laid off if they have minor offenses on their records, such as arrests at union protests, despite decades of service at the Law School.

UNITE HERE Local 26 President Carlos Aramayo said the union will continue to support the Restaurant Associates workers during the transition.

“UNITE HERE Local 26 stands with the workers at the Harvard Law School in their efforts to make sure that every worker who wants to continue to be employed at Harvard University is allowed to do so and will oppose any action by the University to permanently lay off workers from the Law School,” he said.

In an emailed statement, McGovern said he will “support the union” in any way possible.

“I hope that by showing the Law School that there is a great deal of support for the workers that they will change their position and treat these front line workers with the respect and dignity they deserve,” he wrote.

Rainey said the union may hold other actions to protest the transition procedure. Harvard’s dining workers are also in the middle of negotiating a new contract, and she added that the union would continue to push for job security at the bargaining table.

“We want to ensure that everybody still has a job,” she said.

“We are grateful to Restaurant Associates and, in particular, to its many employees, who have served our community well over these years,” Neal wrote. “And we are looking forward to seeing many of them again when campus dining facilities reopen in the fall for the first time in a year and a half.”