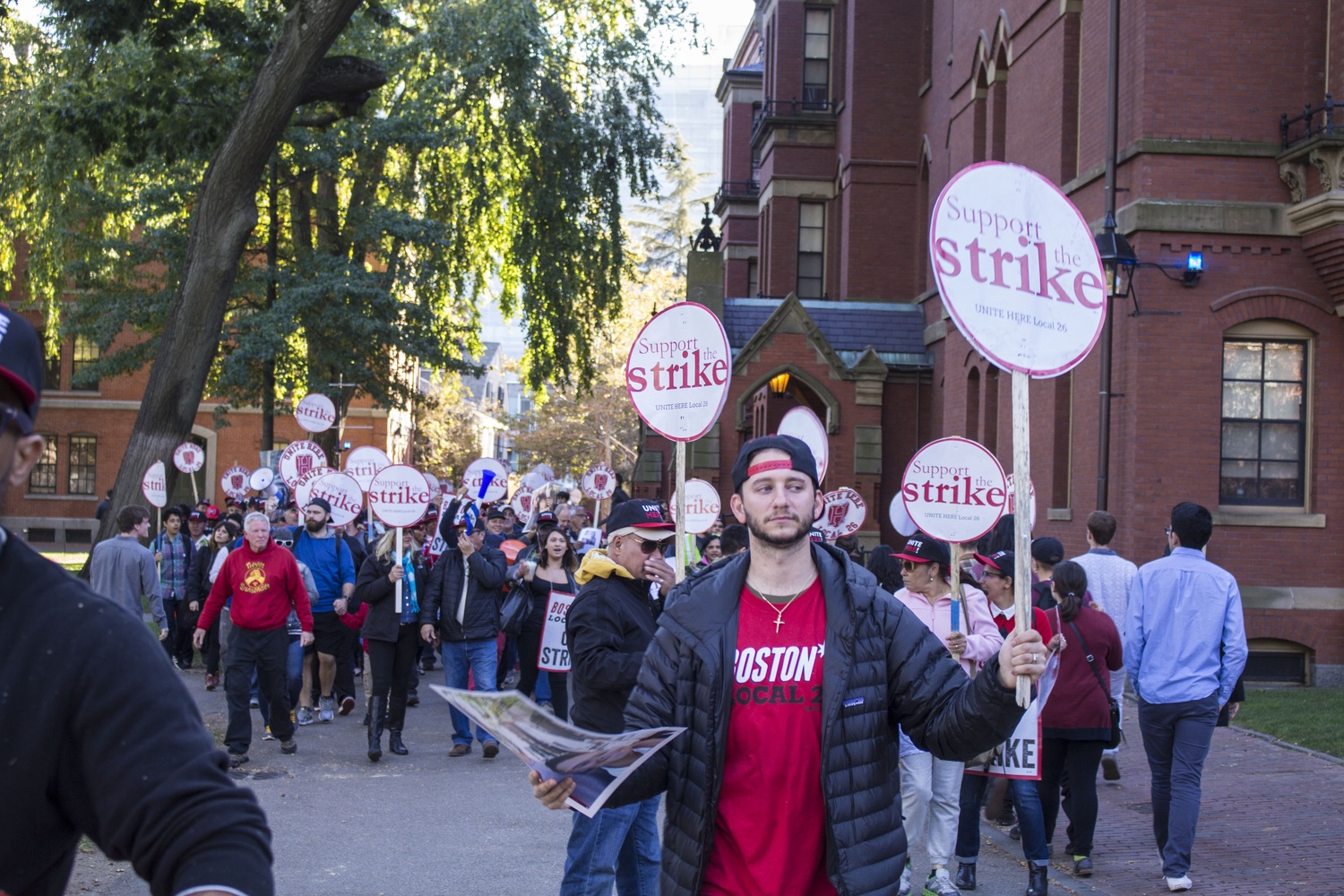 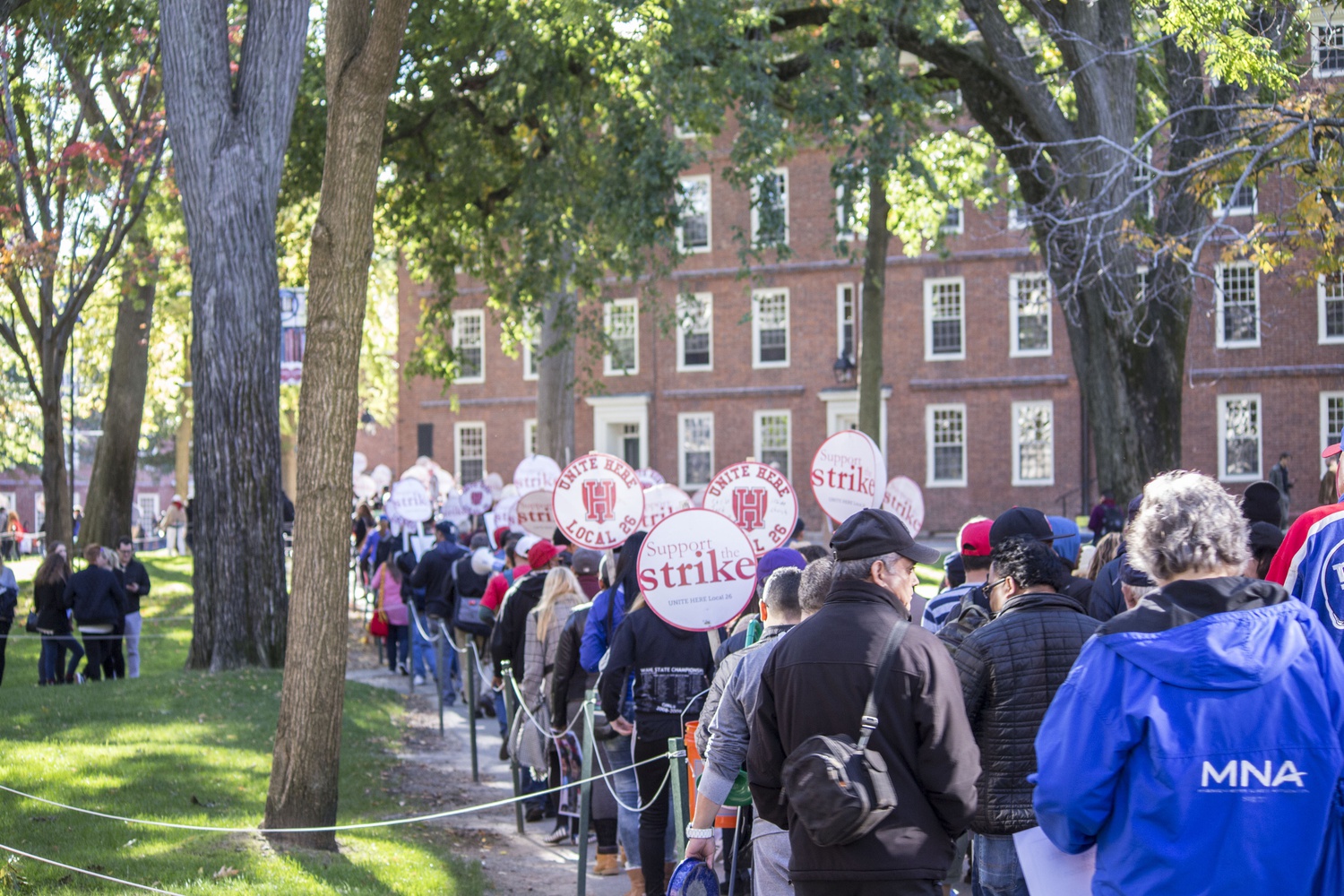 HUDS March in the Yard - HUDS strikers and supporters march through the Yard from the Science Center Plaza towards the Square. 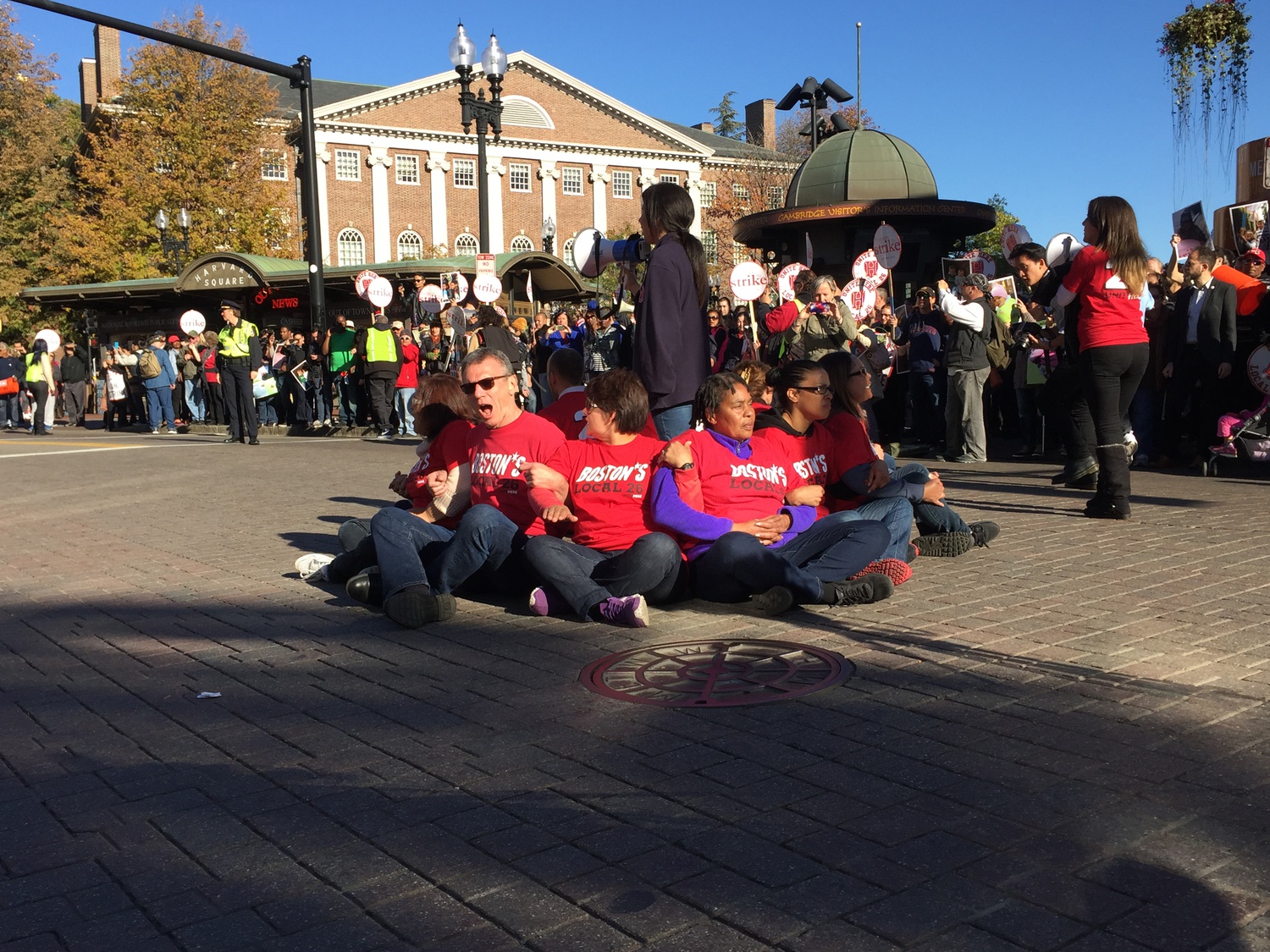 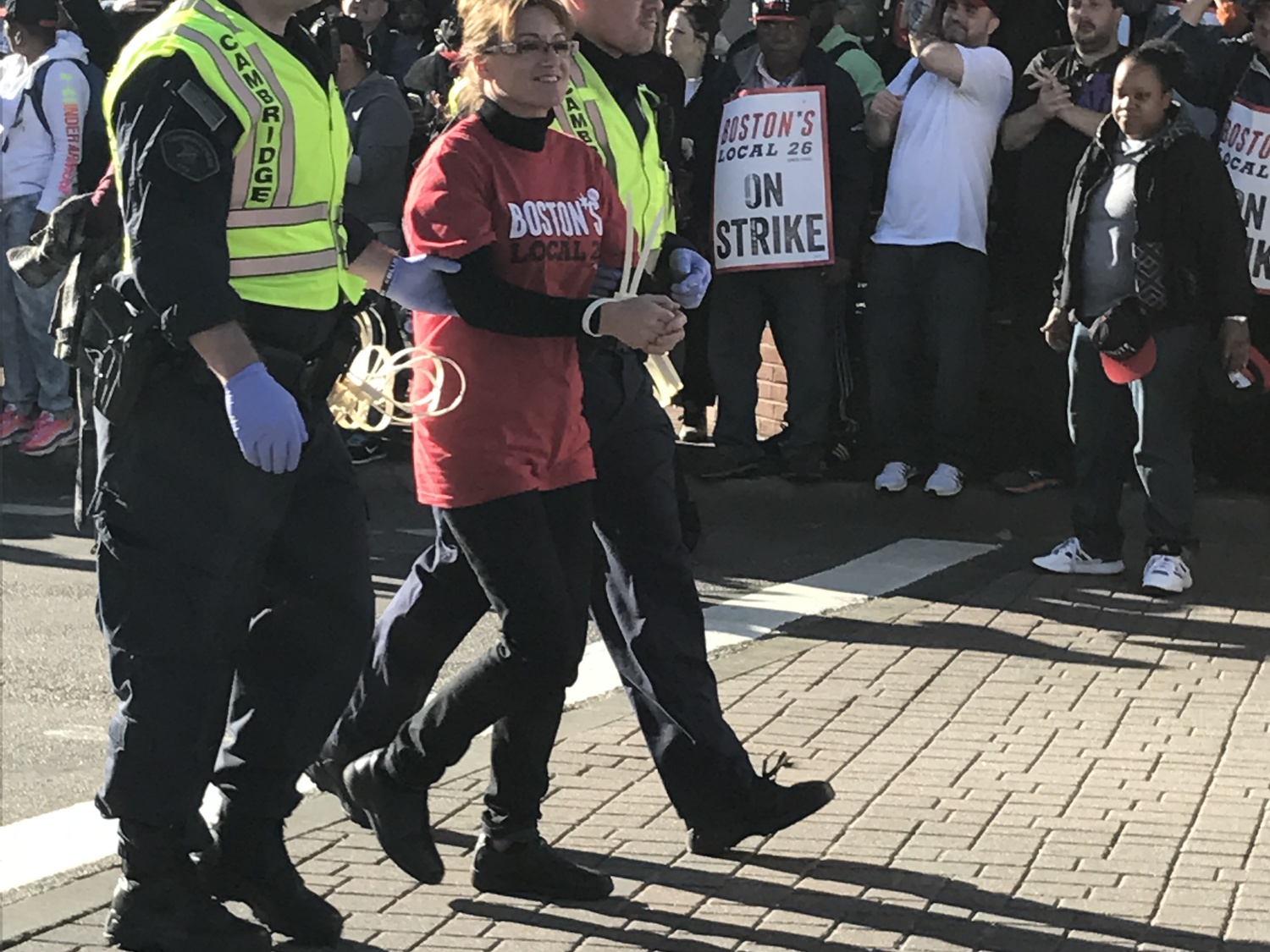 HUDS Worker Escorted Away - Dining services worker Anabela Pappas is escorted away in handcuffs by a Cambridge Police officer Friday. 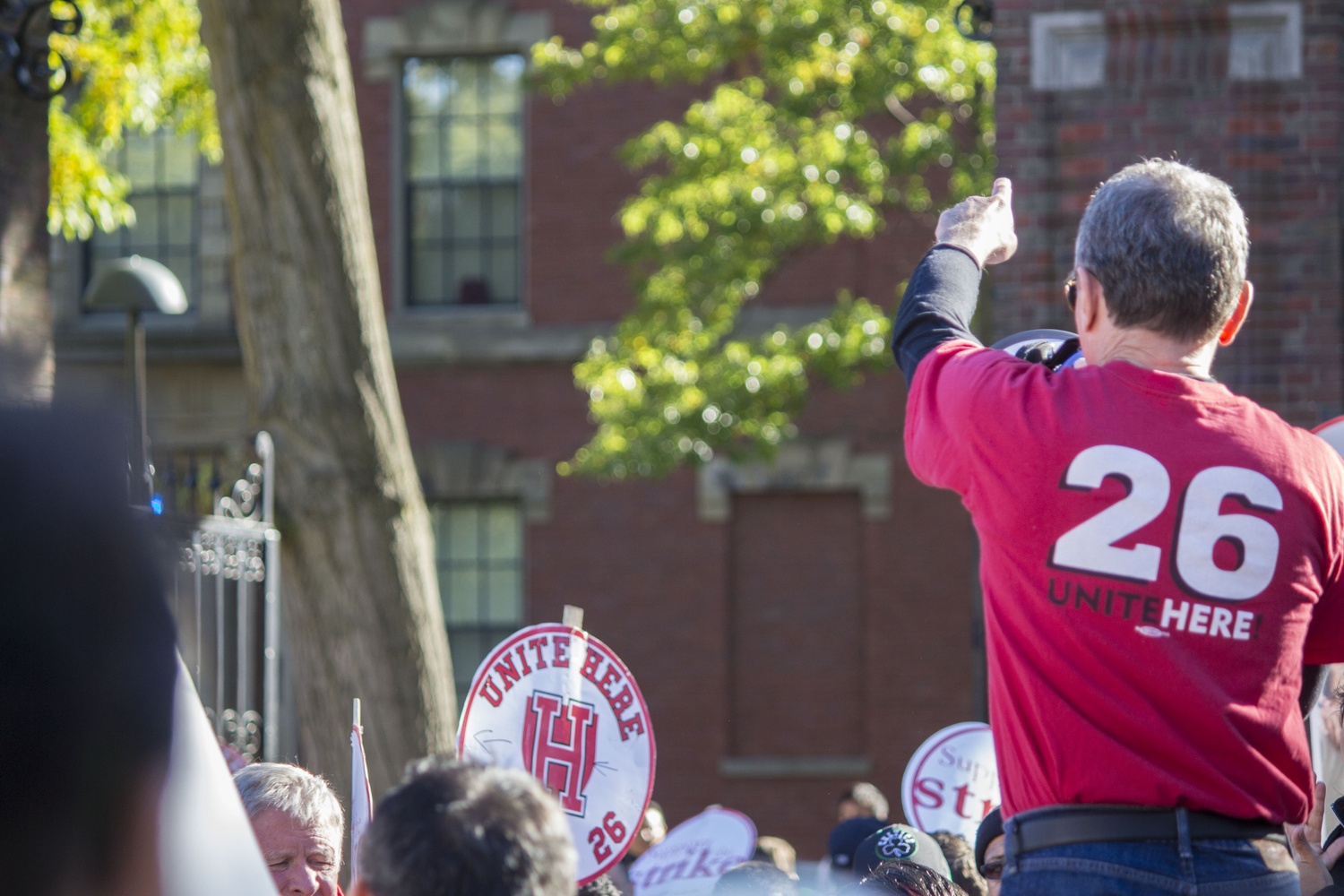 Cambridge Police officers arrested 11 people Friday who were blocking traffic in protest of recent labor negotiations between Harvard and its dining services workers.

The 11 people sat in a circle at the intersection of JFK Street and Massachusetts Avenue, blocking traffic, as roughly 100 other people chanting brandishing signs in support of the union lined the streets. After more than 20 minutes of demonstration and chanting about the negotiations, police officers arrested labor organizers and Harvard University Dining Services workers. Those arrested will be charged with disorderly conduct and put up for bail immediately, according to CPD Deputy Superintendent Steven DeMarco.

Two of those arrested were the president and lead negotiator of the Boston-based union representing dining workers, UNITE HERE Local 26—Brian Lang and Michael Kramer.

Those arrested were released Friday evening, according to Local 26's Facebook page, and they will appear in court Monday.

CPD and the demonstrators discussed the strike and arrests ahead of time, according to DeMarco.

President of UNITE HERE Local 26 Brian Lang rallies the crowd of HUDS strikers and HUDS supporters in the Science Center Plaza before the crowd headed to Harvard Square, where Lang was arrested. By Helen Y. Wu

“We had an group of officers that were designated, that were making announcements to clear the street, and we already knew they wouldn't adhere to the order,” DeMarco said. “The officers were ordered to pick them off the street. They were really compliant.”

Other supporters of the strike interrupted a joint reunion event for the Classes of 1971, 1976, and 1986 where University President Drew G. Faust was speaking Friday afternoon in Science Center lecture hall B. An alumnus, Jonathan K. Walters ’71, helped two students—Gabe G. Hodgkin ’18 and Grace F. Evans ’19—into the meeting, and around a dozen HUDS supporters followed them. The students said they chanted “support the strike.” Members of the Harvard University Police Department escorted them out.

As she left the alumni event in the Science Center, Faust said that the meeting was “a great exchange with alumni.”

When asked about the protesters, Faust said: “They expressed themselves.”

The demonstrations marked the latest development in a nearly two-weeks long strike of Harvard’s dining services workers. The historic walkout came after months of tense negotiations with the University over wages and health benefits failed to achieve a new contract.

The protests at the Science Center and in Harvard Square occurred simultaneously. On Mass. Ave. around 3:45 p.m. Friday, police carrying twist-tie handcuffs approached the circle of people and escorted them away from the intersection. The officers cuffed the workers one-by-one and led them to police vehicles, as onlookers and other striking employees shouted “Shame on you, Harvard” and “No justice, no peace” from the sidelines. The workers are being held at the CPD on a bail of “about $25 to $40,” DeMarco estimated.

Around the same time, members of the Student Labor Action Movement entered an alumni meeting in Science Center B, shouting “Support the Strike” as HUPD officers cut them off amidst brief physical contact.

As the demonstration in Harvard Square broke up following the arrests, protesters marched to the Yard, where they joined others on the Science Center Plaza. There, protesters marched in circles and heard brief speeches from a union member and student from the School of Public Health.

Then, about 30 undergraduates and Law School students lined the entrance to Science Center B, asking alumni to support the strike after the event.

Dean of the College Rakesh Khurana also attended Friday afternoon’s alumni event, and passed through a path lined by protesters as he departed.

According to Hodgkin, a member of the College’s Student Labor Action Movement, the student demonstrators were well-received by alumni, adding that he thought alumni were mostly “enthusiastic” about their presence in the building.