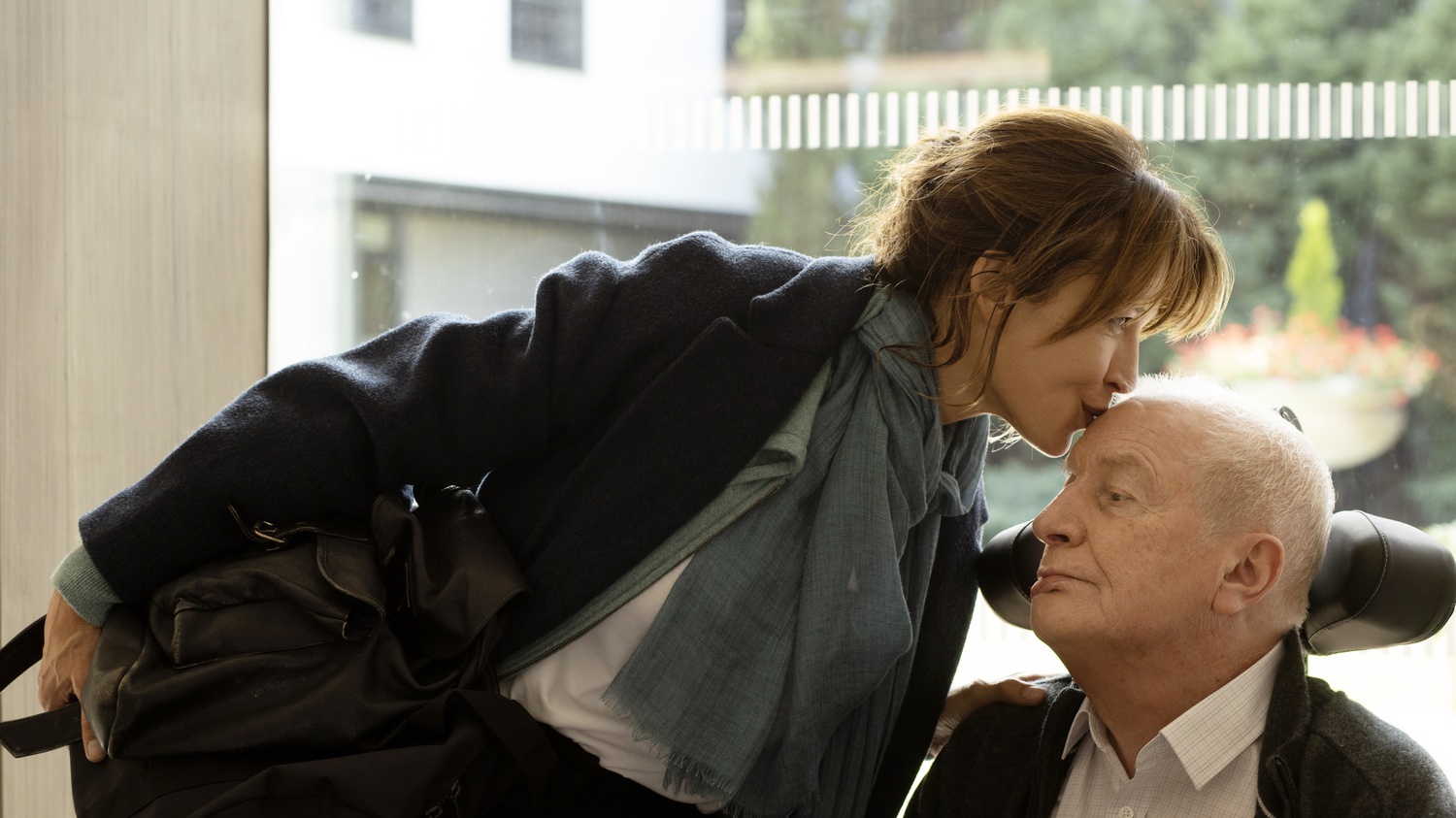 “Real love hurts.” It shines its harsh light into your vulnerable crevices; it knows just when you’re at your weakest. It can survive any number of grievances, and it can destroy you in the process.

With certain loved ones, it’s hard to know what will remain when love and hurt are disentangled, or even find out how to do so in the first place. But that is the job Emmanuèle (Sophie Marceau) is tasked with in “Everything Went Fine” — to figure out what it means to love someone who can’t stop hurting you, and to learn to keep that pain from destroying you in the process.

Emmanuèle is the first at her 85-year-old father André’s (André Dussollier) bedside when a stroke leaves him paralyzed. She is almost impenetrably calm, urging him to eat, comforting him with steady reassurances he continues to shoot down. Finally, however, his favorite daughter breaks through, winning him over with a plastic-wrapped sandwich. She brings the other half of the sandwich home, placing it in the fridge with tender hope; her father is still in the hospital, but she was able to help — and that is all that matters.

Several hours later, André awakens to a choking fit in the ICU, coughing up the same sandwich and nearly choking to death. Emmanuèle puts the sandwich in the freezer; it won’t be needed for a while.

Then her father shares the film’s central revelation: André doesn’t want to fight the stroke, but rather he wants to die with dignity — and he needs her help. She snaps, storms out, goes to a bar, and throws out the sandwich. (The sandwich is just one of director François Ozon’s many uses of subtle, lyric symbolism, a visual metaphor that sticks with audiences without its meaning being so obvious as to be heavy-handed). Emmanuèle has spent her life withstanding her father’s mistakes and demands — “you can’t refuse my father anything,” she says several times throughout the movie — but this request will be the hardest of all. She will lose the respect she so prizes if she does not help him, and she will lose the father she loves if she does.

Unlike many of this year’s Palme d’Or contenders, “Everything Went Well” is not a call to action; it does not pose a question about the ethics of euthanasia. The audiences see André’s absolute certainty that ending life on his own terms is his only option, and also the devastation his decision wrecks on his vehemently-opposed family and friends. Rather than passing judgement on André’s decision, then, the film seems concerned merely with depicting it in utter emotional honesty, asking not whether it is ever justified, but how the family members left behind are to cope.

And Emmanuèle is, it turns out, more than up to the task. Though one of her first steps after her father makes his request is to tell her psychiatrist she’s unsure she’ll be “able to handle” assisting her father to die, it’s clear that she is a woman with a well of resilience much deeper than meets the eye. One part of that is the many ways she takes care of herself: preemptively upping her dosage of antidepressants, calling her beloved husband for help and accepting it when he gives it, taking a weekend vacation and break from hospital visits with a close friend. Just as she grounds her father and sister with a hand on their shoulder or a willingness to absorb their anger without personal offense, she too knows how to ground herself.

And that deep well of resilience is Emmanuèle’s greatest strength. She is thrown into relief against her mother, a woman who stayed with André “because I loved him, silly girl” — a line she answers no matter how miserable he made her. But guided by Ozon’s perfectly-paced growth and the core of self-protective resolve Marceau brings to the character, Emmanuèle does not let herself become devoured. It is deeply, wrenchingly clear that she loves her father, enough to overlook a lifetime of neglect, an inability to give a basic compliment without insulting her weight or intelligence, and a deep selfishness that devours everyone in its path. But there are certain lines she will not cross and, in a conclusion that could not be more satisfying, Ozon reminds audiences that salvation can come in the strength to let go.