From Cannes: ‘Benedetta’ is a No-Holds-Barred Sexual Fantasy 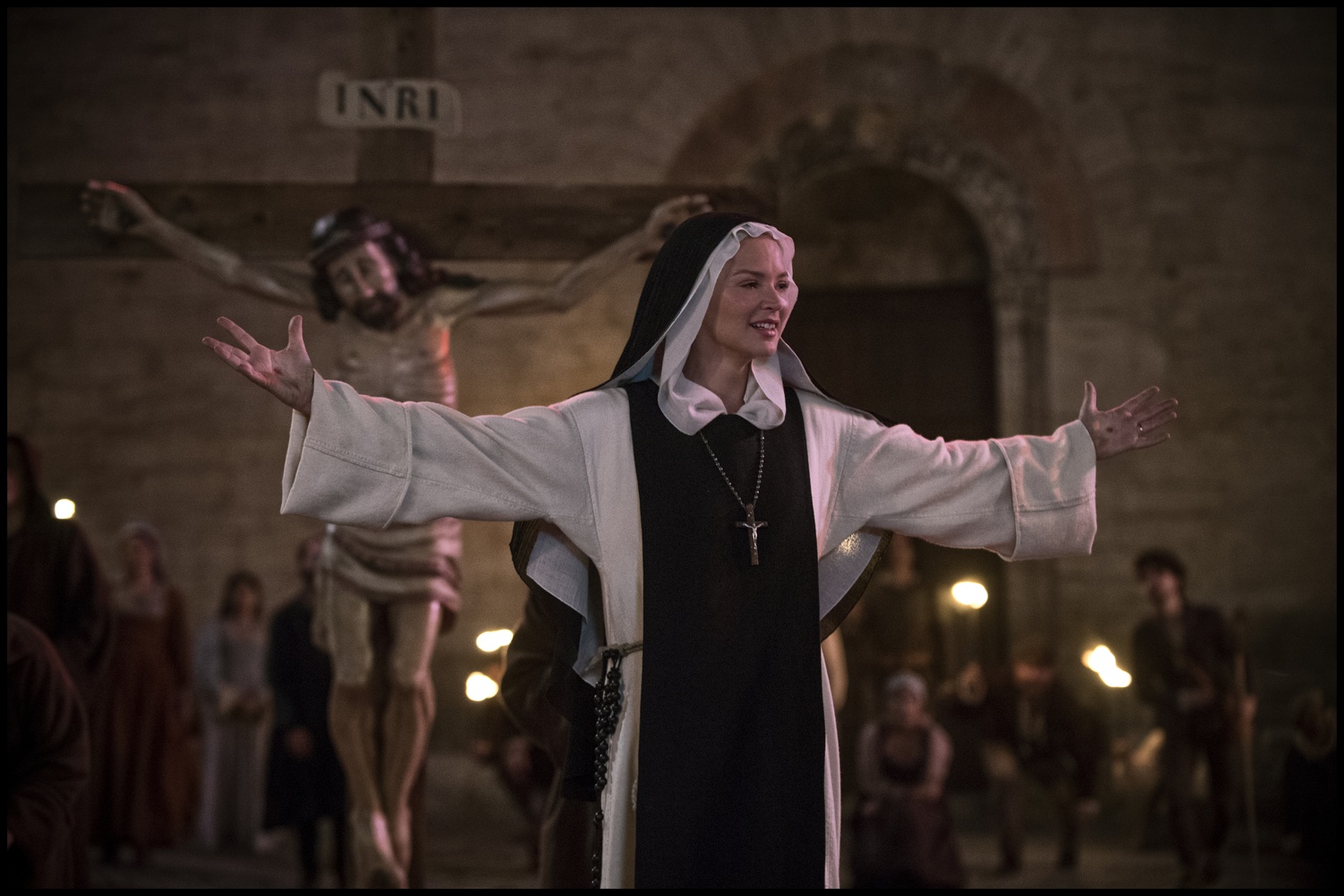 Paul Verhoeven is out to challenge our cultural Puritanism. A man fascinated by the taboo and the off-limits, his films are full of graphic, shocking, controversial depictions of sexuality.

For that style, he’s fielded a fair amount of criticism from both the left and the right. Bitch Media described his 1992 “Basic Instinct” as using queer women as “an arousing spectacle for men” and perpetuating bisexual stereotypes. On the set of the same film, actress Sharon Stone accused him of tricking her into filming an exposed scene without underwear. His 1980 film “Spetters” was so controversial it led to the creation of a “National Anti-Spetters Committee” which pushed him out of his native Holland. In one of its most shocking scenes, a character realizes his repressed homosexuality through being gang-raped.

“Benedetta” is, in a similar vein, a graphic and exaggerated movie: pushing religion, sex, and pain to their extreme at every turn.

Verhoeven’s eponymous heroine has grown up in a convent her entire life, and she has her tightly-wound ideas about sexuality unraveled when she meets the new nun Bartolomea (Daphne Patakia). Each time the women get too close, Benedetta (Virginie Efira) has a vision of a possessive Jesus, and often wakes from them with self-mutilation scars. In one vision, a deformed, one-eyed Jesus-like figure attempts to rape her; in another, she joins him on the cross and impales spikes into her hands in an imitation of the crucifixion. We hear her writhing in bed in the midst of her nightmares, screaming in pain as she ostensibly wrestles with the layers of religious indoctrination she has been taught.

To the film’s credit, Verhoeven’s vivid, unflinching imagination offers a scathing critique of the deep sexual repression and violence that can be a part of Christianity. He quotes and recreates Bible verses about blinding an eye that causes you to sin or about burning gay people, showing what it looks like when parts of the Bible are taken to their literal extreme. And these real issues, as the inspiration for the film’s wild fantasies, add a groundedness and humanity to the film’s over-the-top, shock-factor style.

But on the other hand, drawing on the suffering of marginalized identities one doesn’t belong to in order to create an exaggerated spectacle can easily become exploitative, if done wrong.

And Benedetta does it wrong in nearly every way.

Verhoeven casts straight actresses to play characters that have no personality or depth other than their desire to have sex with each other. Bartolomea pursues a sexual relationship with Benedetta immediately and aggressively. She attempts to finger her in a church service in front of the entire convent the day after meeting her and steals her dress so she can see her naked. There is no emotion behind or rationalization for her behavior, nor is there any conversation about consent or whether the extremely-repressed Benedetta is ready for or comfortable with this aggressive behavior. Bartolomea is written as the same sex-obsessed stereotype so many queer women are reduced to in films, a stereotype used to justify rape against and between them and delegitimize their identities.

But the sex itself is only half the problem; Verhoeven also repeatedly sexualizes the violence they endure. In one scene, Bartolomea is stripped for no apparent reason before being tortured, and we see full, gratuitous shots of her naked body as she screams in pain for several minutes. In another, Bartolomea shares that she was the victim of horrific, repeated sexual assaults from her father and brothers, and Benedetta sensually touches the many bruises on her bare leg as the two come closer. Pain — specifically, female pain — in “Benedetta” seems to be inflicted and ogled by the camera’s eye not out of necessity, but for the audience’s entertainment. Verhoeven has taken the pain of the real-life Benedetta — and by extension, of the many queer women who have been punished and even tortured for who they love — and turned it into an almost-masturbatory piece of entertainment.

This exploitation feels distinctly personal for me, as a lesbian woman who grew up in a repressive Christian community. I have firsthand experience with the powerful conversion-therapy industry that is dedicated to associating queer desire with pain, and with the many more thousands of people who have taken that duty upon themselves. For Verhoeven to normalize that association, to mock and parody it with wild visions of a vengeful Jesus trying to “make [Benedetta] his bride,” and then to fetishize it feels not just exploitative, but insulting. It is one thing to portray a story and experience that is not yours with sensitivity, nuance, and genuine care — a task Verhoeven should have taken even more seriously given the criticisms he received for “Basic Instinct” — but another thing entirely to cast no openly-queer characters, make numerous common, easily-googleable mistakes around harmful representation, and robbing his female characters of any real emotional depth. Audiences are left feeling that “Benedetta” is a movie about queer suffering creating by and for straight people.