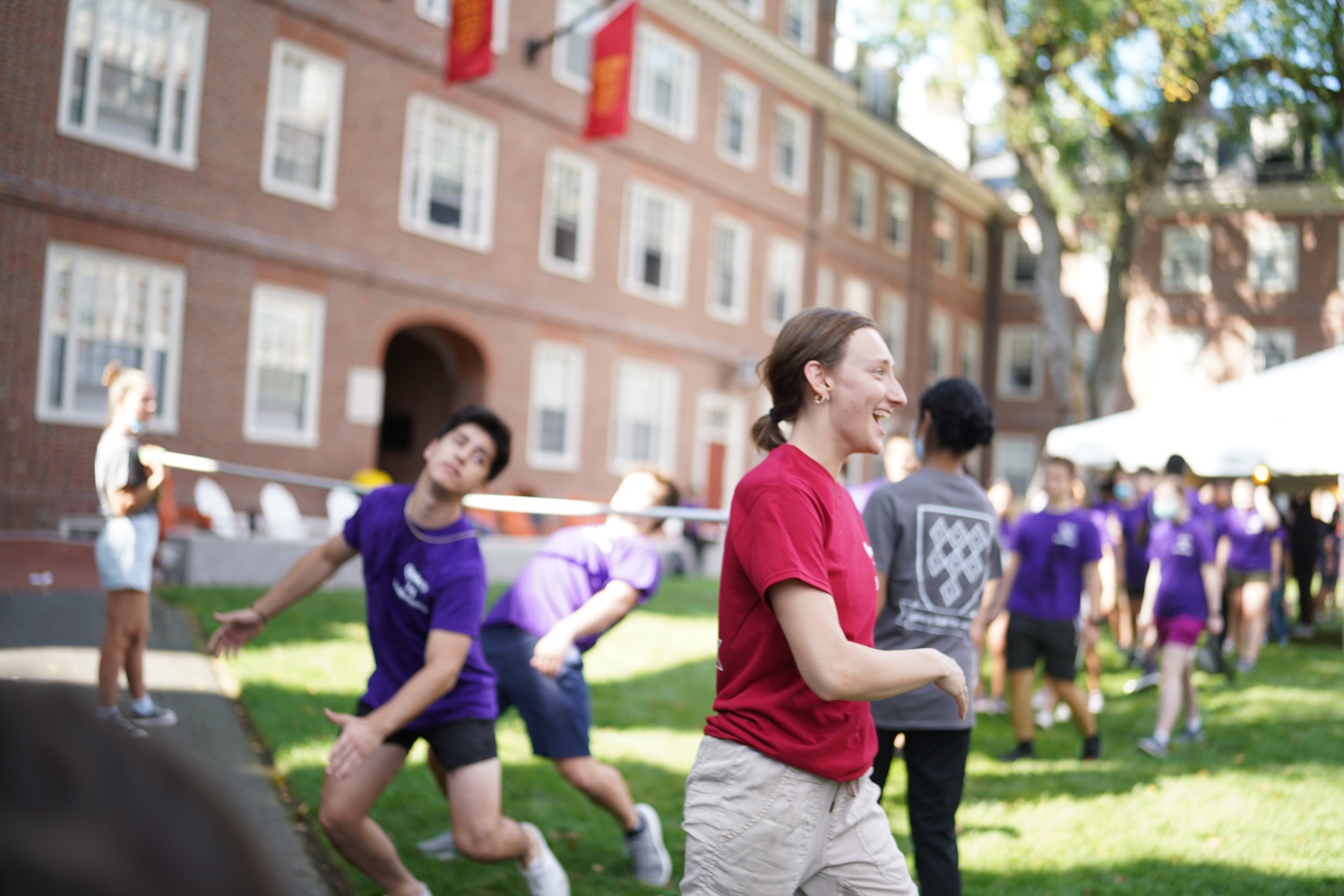 Students of Quincy House participate in the House's field day activities in the Quincy courtyard this past Saturday. By Courtesy of Eric Beerbohm
By Hannah J. Martinez

As Harvard's campus roars back to life this fall, many undergraduate Houses are resurrecting long-standing ceremonies and traditions to welcome new and returning House members.

“It’s just a wonderful sight, and a wonderful experience to interact with our community in our dining halls, in our courtyards,” Lowell House Faculty Dean David I. Laibson ’88 said.

Some Houses kicked off the start of the semester with time-honored traditions, such as Pforzheimer House’s Camp Pfoho and Quincy House’s Field Day.

While Camp Pfoho — an annual Pforzheimer House outing to a summer camp in western Massachusetts — was delayed for juniors by the forecasted Hurricane Henri, students were still able to participate, according to Pforzheimer House Faculty Dean Anne Harrington ’82.

Activities ranged from kayaking and swimming in a lake to wall climbing and archery, Harrington said. Camp Pfoho began with icebreakers so students could get to know each other.

“One of the things we’re extremely conscious of is that people don’t know each other, even in their own cohort, in the ways that they would have had they not been coming off the back of this pandemic,” she said.

Quincy House's Field Day featured games pitting class cohorts against one another, among other traditions.

“Field Day goes back sixty-plus years,” Quincy House Faculty Dean Eric Beerbohm said. “It begins with a bagpiper and has an exorcism.”

Beerbohm said that the exorcism was “updated” to exorcise modern-day sins from the House, such as microaggressions and mansplaining.

Eliot House hosted a series of events geared towards those two classes, such as tours of the House and scavenger hunts.

“We really tried to focus on getting to know those spaces in the house,” Eliot House Faculty Dean Stephanie A. Paulsell said. “There’s lots of cool secret spaces in this house. There’s a dark room and a ballet room and a movie theater and a beautiful library.”

In Dunster House, sophomores and juniors went on a cruise along the Boston harbor.

“For the first time this year, we did it as a sunset cruise,” Dunster House Faculty Dean Sean D. Kelly said. “Moving the cruise to the early evening was amazing.”

Seniors were not left out of the welcoming ceremonies.

“We did a toast for the seniors at sunset in the courtyard the weekend they arrived,” Dunster House Faculty Dean Cheryl Chen said. “We had prosecco and sparkling cider and chocolate-covered strawberries.”

Beyond welcoming ceremonies, some Houses have also brought back beloved traditions.

Lowell House had its first in-person Lowell Tea, a weekly tea that welcomes students from every house, on Sept. 2. According to Laibson, a "team" of bakers led by two Lowell House residents prepare pastries and finger food for guests.

“It is a really wonderful tradition that goes back probably almost a century,” Laibson said.

A rise in coronavirus cases on campus at the start of the semester forced Lowell House to temporarily discontinue the weekly tradition.

Laibson said he is looking forward to future teas, though.

“We’re extremely eager to go back to Lowell Tea," he said. "It is held every week, and I hope you’ll join us."