‘The Chair’ is the Latest Netflix Miniseries That Ends Too Soon 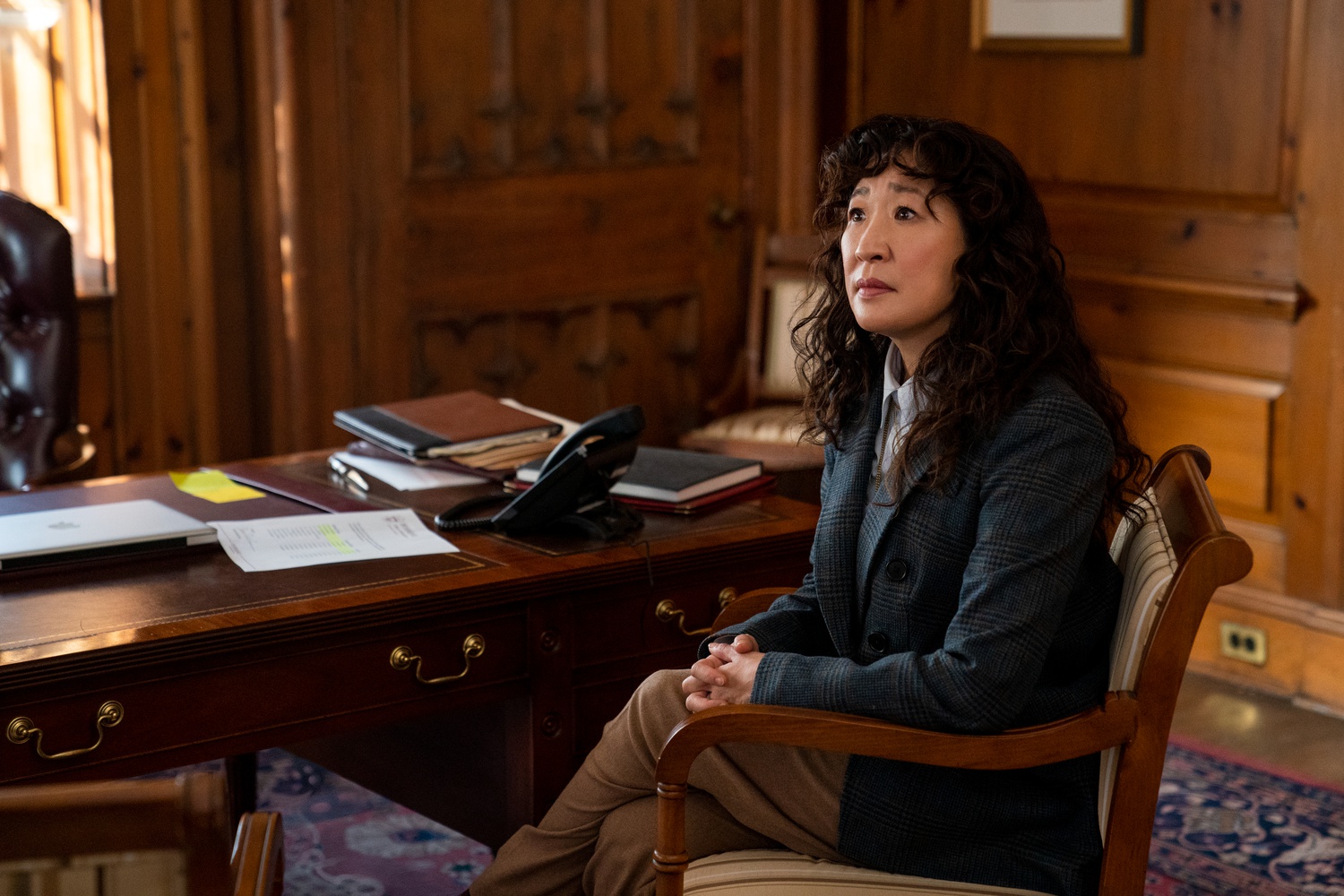 Sandra Oh as Ji-Yoon in Netflix's "The Chair" By Courtesy of Eliza Morse/Netflix
By Mikel J. Davies, Crimson Staff Writer

In the latest of Netflix’s forays into television, writers Amanda Peet and Annie Julia Wyman (who completed her PhD in English at Harvard in 2017) crafted “The Chair,” a new miniseries offering an engaging, critical take on the struggles that people of color still face within the ivory towers of higher education. “The Chair” follows savvy professor Ji-Yoon Kim (Sandra Oh) as she is promoted to chair of the English department at Pembroke University, a fictionalized Ivy League-type institution. Delving into her struggles with a fickle love life, an aging and failing department and the difficulties of single motherhood, the show goes far beyond solely focusing on inequality within academia. With its six strikingly short, thirty-minute episodes, “The Chair” does an excellent job of leaving audiences wanting more.

The miniseries begins with an impressive yet hilarious introduction to the beautiful campus and its surrounding town. With the echoes of “Gloria in Excelsis Deo” ringing in the background, Ji-Yoon is first seen gawking at the immediate demands of her new position. She discovers that she is in over her head almost immediately, as not even her literal chair is functioning: It snaps almost as soon as she sits down.

While managing a department of mostly dated professors who lack the ability to relate to students passionate about life and their futures, Ji-Yoon also has to deal with one of the few professors not in the senior citizen category: Bill Dobson (Jay Duplass). This one man, still reeling from the loss of his wife, causes significant strife for Ji-Yoon as she takes the helm of the beloved English Department. Though their chemistry and possible romantic history are clear from their first scene together, it’s never fully explored. By the end of the season, Ji-Yoon and Bill’s relationship still does not come across as fleshed-out. It may be because of the nature of their positions as coworkers, or the showrunners’ reluctance to bog down their fast-moving dramedy with romantic backstories, but this aspect of the show feels unpolished, contrasting sharply from the rest of the well-curated production.

While the relationship between Bill and Ji-Yoon feels under-developed, it is the relationship between Bill and Ji-Yoon’s daughter Ju-Hee “Ju Ju” (Everly Carganilla) that perfectly captures the joy of childhood and portrays the amazing impact one great person can have on another’s life. Bill, although a burgeoning alcoholic and irresponsible father himself, treats Ju Ju with kindness and support. Bill takes her on adventures and helps watch her while Ji-Yoon is trapped at work, trying to manage the department’s challenges. This simple familial relationship is secondary within the show, but captures themes of redemption and friendship.

Bill does not have the same easy kinship in many of the other relationships in his life. With his wife’s recent passing and his daughter moving away to college and cutting ties, Bill is left sad and alone. In his first lecture he accidentally projects some highly NSFW footage of his wife in labor then proceeds to make a Nazi salute and mock the fascist regime of Nazi Germany. This act, shortsighted and damning, causes a cascade of backlash against Bill and the University Administration. Ji-Yoon is caught between protecting the university and someone she cares for deeply, and Bill is quickly torn off his academic pedestal. Clearly, the actions Bill took were grossly unprofessional and wrong, which the students of Pembroke are quick to point out. Through that storyline, the show explores underlying themes of racism, insensitivity and reckoning, illustrating how more and more university students across the country are no longer tolerant of “one bad joke.”

Even while Bill and Ju Ju’s time on screen together is movingly orchestrated, Ju Ju and Ji-Yoon’s scenes feel just as carefully portrayed to create the opposite effect. Their interactions are frustrating and raw, adding an element of realism as they navigate Ju Ju‘s rejection of her traditional Korean name and resentment around being adopted. This fraught mother-daughter relationship between Ju Ju and Ji-Yoon brings a needed sense of interpersonal grounding and strife to the story, distracting from Ji-Yoon’s professional struggles at Pembroke.

As the show continues, the audience is also introduced to Yaz Mackay (Nana Mensah), an up-and-coming professor seeking tenure. As a woman of color herself, Ji-Yoon tries to support her goals, hoping to see the first Black woman gain tenure and the “distinguished lectureship” in the English Department. However, she faces frustrating obstacles to recognition; for example a senior professor, Dr. Elliot Rentz (Bob Balaban), disapproves of her interactive teaching style and dislikes his own role in the tenure process as the one writing Yaz’s recommendations. As he wields the power to either grant her tenure or deny it, the effects of the school’s entrenched, institutional racism become more and more clear.

Although never overt, the racism evident in the department stands in the way of Ji-Yoon’s plans to support talented academics and modernize the department. In one instance Dean Larson (David Morse) implores Ji-Yoon to give white, pseudo-academic David Duchovny (David Duchovny) the Distinguished Lectures honor rather than acknowledging one of the department’s most popular professors. Throughout the series, Ji-Yoon and Dr. Mackay are both treated as lesser and disrespected by university administration despite Ji-Yoon being the chair of the department and Dr. Mackay the most popular professor with acclaimed publications in notable journals. Ultimately, the show offers a cutting look at institutionalized bias as it affects elite schools, showing the power of administrative suggestion and pressure to push out diverse faculty.

The only thing that could have improved “The Chair” would be a longer series runtime, with more time to explore the show’s many subplots. With only six 30-minute episodes, the audience barely has a chance to fully invest in the familial struggles between Ju Ju and Ji-Yoon, the chair’s potential romance with Bill, and the interplay within the eclectic, challenging English Department. If only to give Dr. Joan Hambling (Holland Taylor), a sweet but fiery professor with a penchant for Chaucer, more screen time, “The Chair” certainly deserves a second season and will hopefully be returning with new installments in the future.