The suits, brought against Harvard and the University of North Carolina by the anti-affirmative action group Students for Fair Admissions, were taken up by the Supreme Court in January after lower courts ruled in favor of both schools.

The court is considering the two cases separately. Justices heard arguments in the UNC case first, beginning at 10 a.m. Lawyers in the Harvard case began presenting at around 1 p.m. Follow live updates below:

Oral arguments concluded just prior to 3 p.m. Monday after more than five hours across the two cases.

The court’s conservative majority aggressively questioned lawyers from Harvard and UNC, signaling skepticism toward their arguments in favor of race-conscious admissions.

Demonstrations outside the court largely died down during the oral arguments, with most rallygoers departing around 12 p.m. Throughout the morning, pro-affirmative action advocates dominated the area around the courthouse steps, where they held signs and led chants calling on the court to uphold race-conscious admissions. 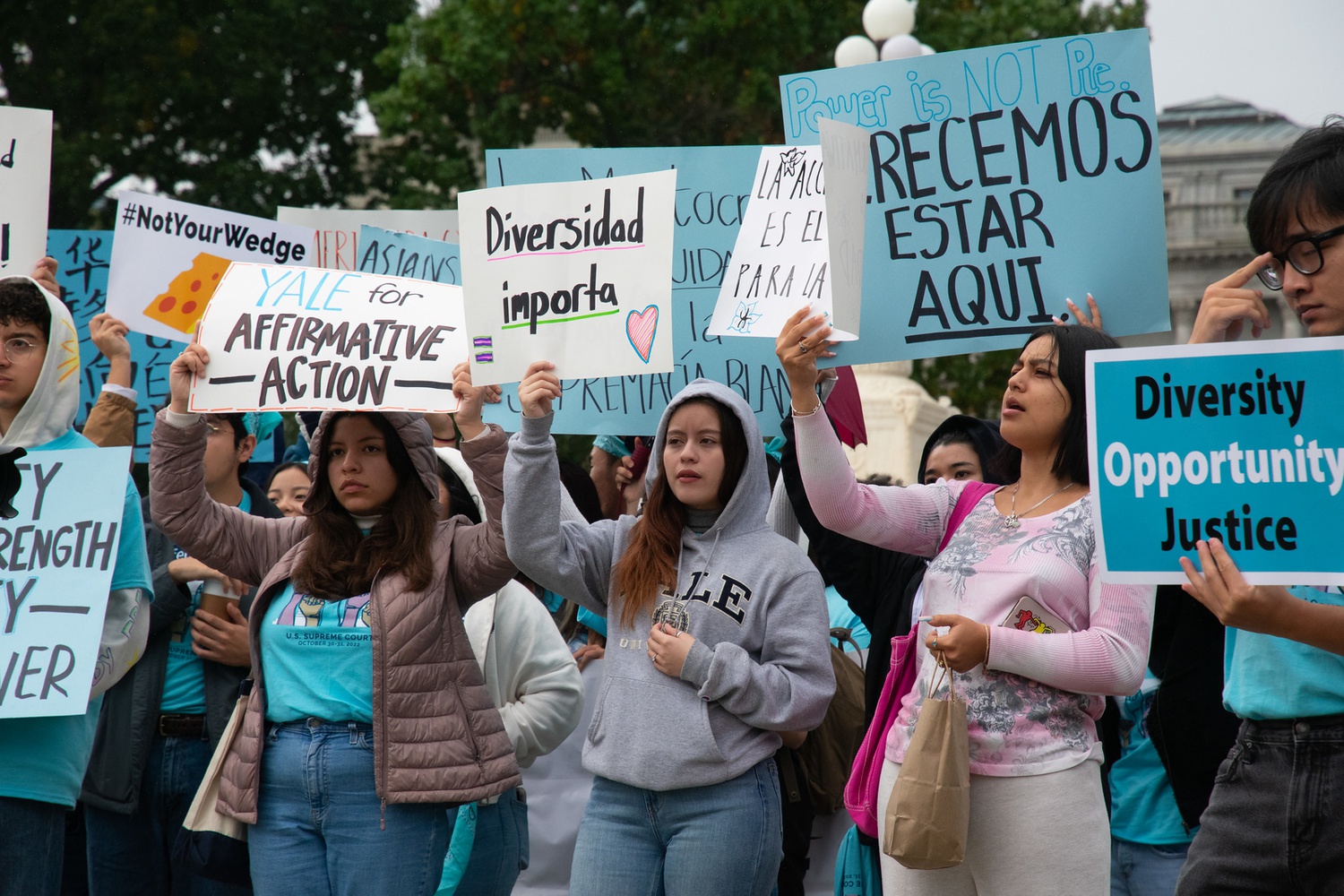 Students from around the country traveled to Washington to rally for affirmative action in front of the Supreme Court. By Julian J. Giordano
Advertisement

“Our future as a country depends on having leaders who have enjoyed wide exposure to students as diverse as the nation itself, and so, as this court has consistently held, if necessary to achieve genuine diversity, a university need not blind itself to race,” Waxman said.

When repeatedly asked by Justice Samuel A. Alito Jr., why Asian students receive the “lowest personal scores” of any group in Harvard’s admissions process, Waxman cited the findings of lower courts, which concluded that there was “no evidence of discrimination in admissions outcomes.”

Waxman explained that personal rating is assigned to an application file by an admissions officer “just as a matter of triage” and that the score “fades into the background” later in the admissions decision process.

“It is not considered in any way once the subcommittees and committees meet,” Waxman said. “It is not the basis of admissions decisions.”

When pressed by Alito on the relevance of the personal score, Waxman added that the rating “does not make a statistical difference” but provides a “rational way” for admissions officers to determine how to allocate their attention among the tens of thousands of applications Harvard receives each year.

“The fact that Asian Americans got on average a marginally lower personal rating score is no more evidence of discrimination against them than the fact that they got a marginally higher rating than any data can show on academics and extracurriculars,” he said. “It doesn't mean that they're either smarter or people think they're smarter.”

“Race is a minus for Asians, a group that continues to face immense racial discrimination in this country,” Norris said. “Asians should be getting into Harvard more than whites, but they don’t because Harvard gives them significantly lower personal ratings.”

Norris also alleged that Harvard makes admissions decisions “based on the box that applicants check” about their race and said that the University did not consider race-neutral alternatives until 2017 — three years after SFFA filed its first suit against Harvard.

Justices questioned Norris about how a university might consider the applications of students who write about experiences related to racial identity in their admissions essays and discussed limitations of race-neutral admissions policies.

United States Solicitor General Elizabeth B. Prelogar argued in favor of race-conscious admissions to maintain diversity among the U.S. military, which she said is a “critical national security imperative.”

“Diversity in higher education is absolutely a compelling interest, and it will remain so,” Prelogar said. “We are not here to suggest that every college and university need to have race-conscious admissions in order to achieve these goals. The fact that there’s been progress along these lines, I think, shows that Grutter is working.”

In response to a question from Justice Samuel A. Alito Jr., Prelogar said the use of race-conscious admissions is “clearly consistent with the original understanding of the Fourteenth Amendment.”

“Surrounding the time of enactment of the Fourteenth Amendment, there were federal and state laws that took race into account for purposes of trying to achieve the central premise of Fourteenth Amendment to bring African American citizens to a point of equality in our society,” Prelogar said.

David S. Hinojosa — a director of the Education Opportunities Project under the Lawyers’ Committee for Civil Rights Under Law — appeared before the court to represent UNC students and alumni of color. In his argument for the consideration of race as a factor in admissions, he pointed to the university’s “over 160 years of exclusion and its present day effects.”

North Carolina Solicitor General Ryan Y. Park, who is arguing on behalf of UNC, invoked Brown v. Board of Education — a landmark case that in 1954 decided that racial segregation in schools is unconstitutional — to defend UNC’s consideration of race in its admissions process.

“Diversity is our nation’s greatest source of strength,” Park said in his opening statement.

Justices questioned Park about the educational benefits provided by diversity and how long race will be considered in admissions.

Park argued the court’s precedents have held that educational diversity is a “compelling interest of the highest order.” 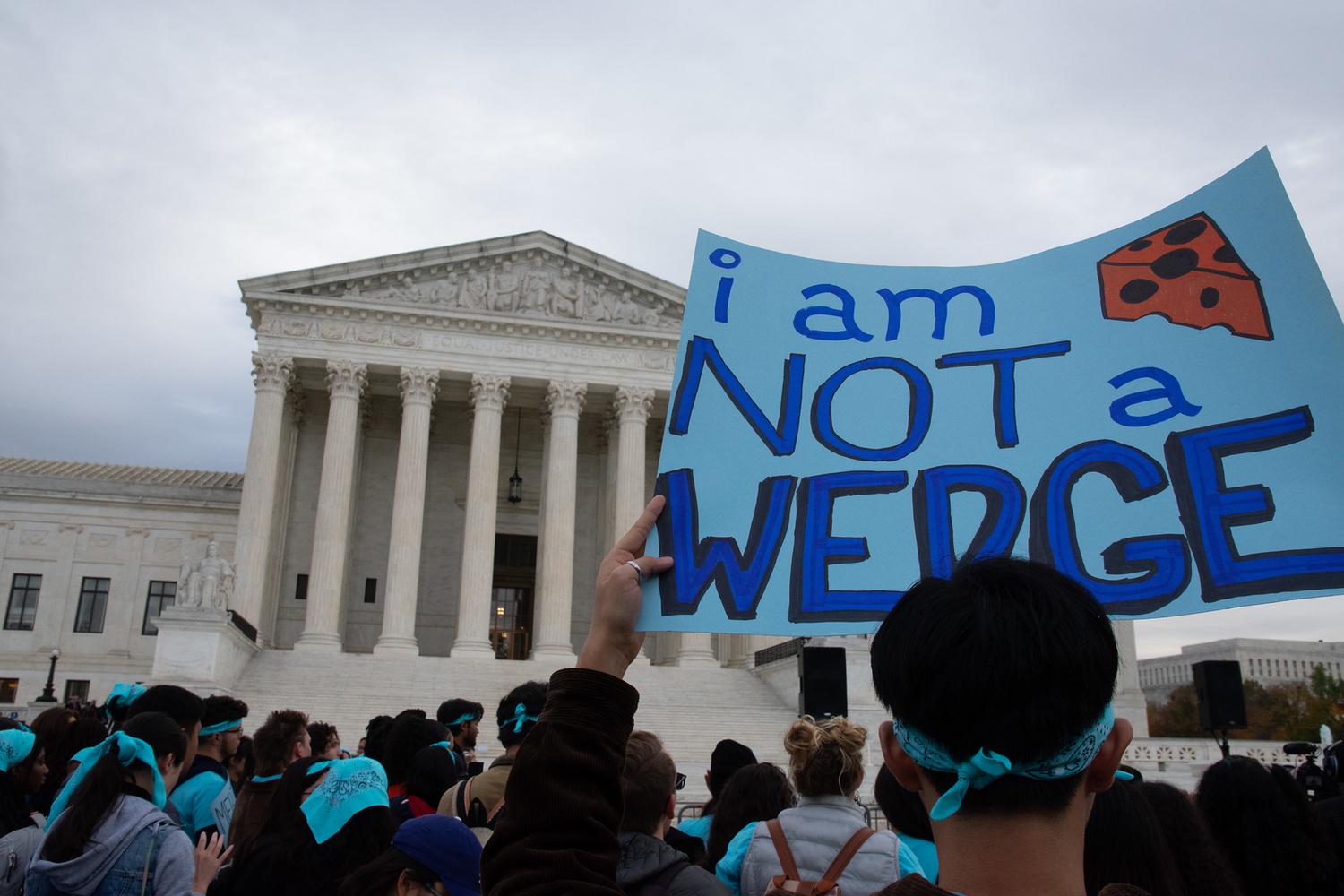 Demonstrators gathered outside the Supreme Court on Monday morning. By Julian J. Giordano

“The correctness of these precedents is confirmed by the historical record, which shows beyond doubt that our Reconstruction founders believed that race conscious measures designed to promote an integrated learning environment are consistent with the original public meaning of the protection clause,” Park said.

Strawbridge faced sharp questions from justices about the use of race-neutral alternatives and whether race is a deciding factor in admissions at UNC.

Hundreds of Pro-Affirmative Action Demonstrators Gather Ahead of Oral Arguments

Hundreds of demonstrators filled the area around the Supreme Court ahead of oral arguments Monday morning. Many lined up hoping to get into the court’s chambers. 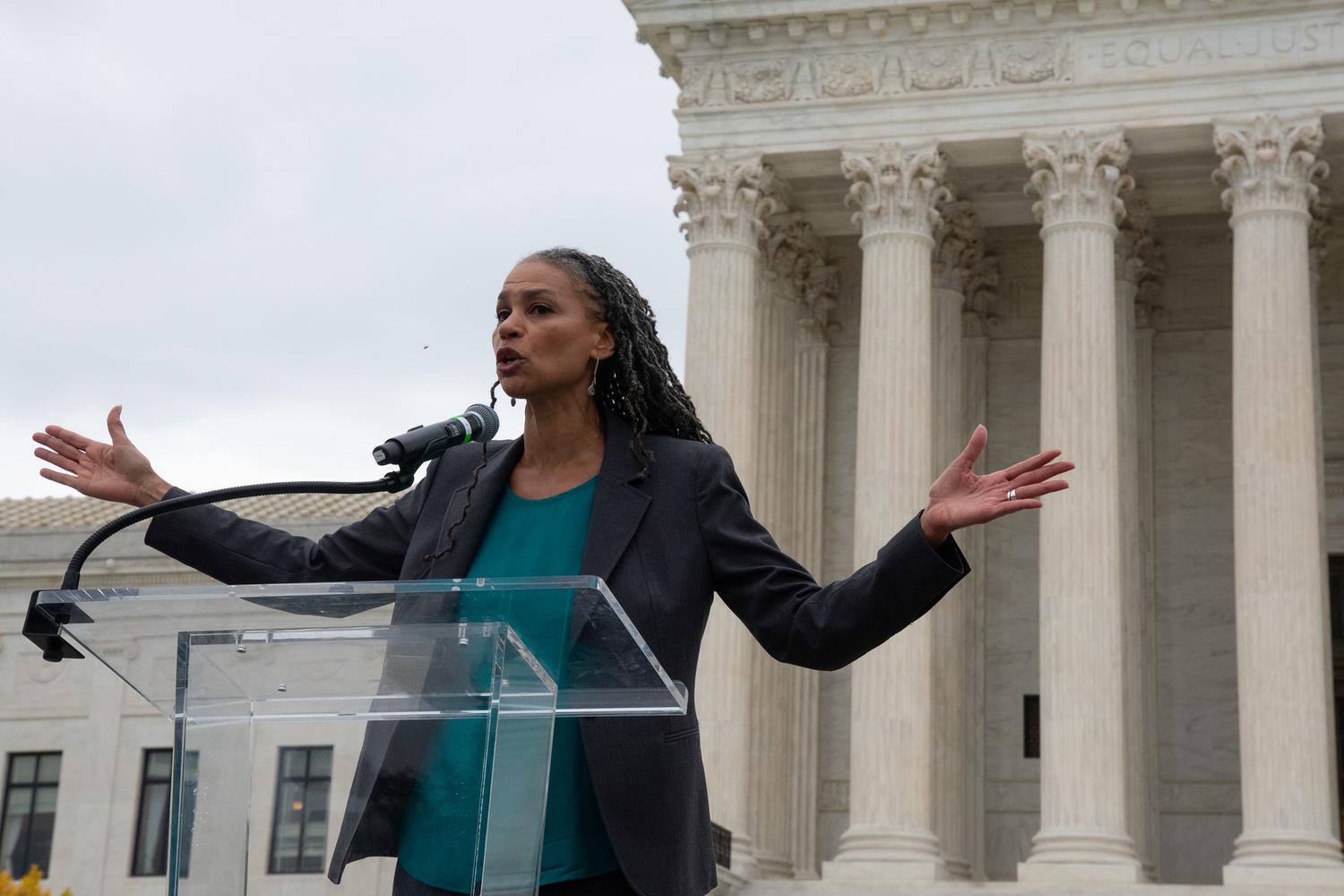 Peter Capote, a U.S. senate intern, arrived at the court at 3:30 a.m. Monday in hopes of attending oral arguments.

“It’s something that’s quite historical and you only get a rare chance to see landmark cases,” said Peter Capote Capote, a U.S. Senate intern. 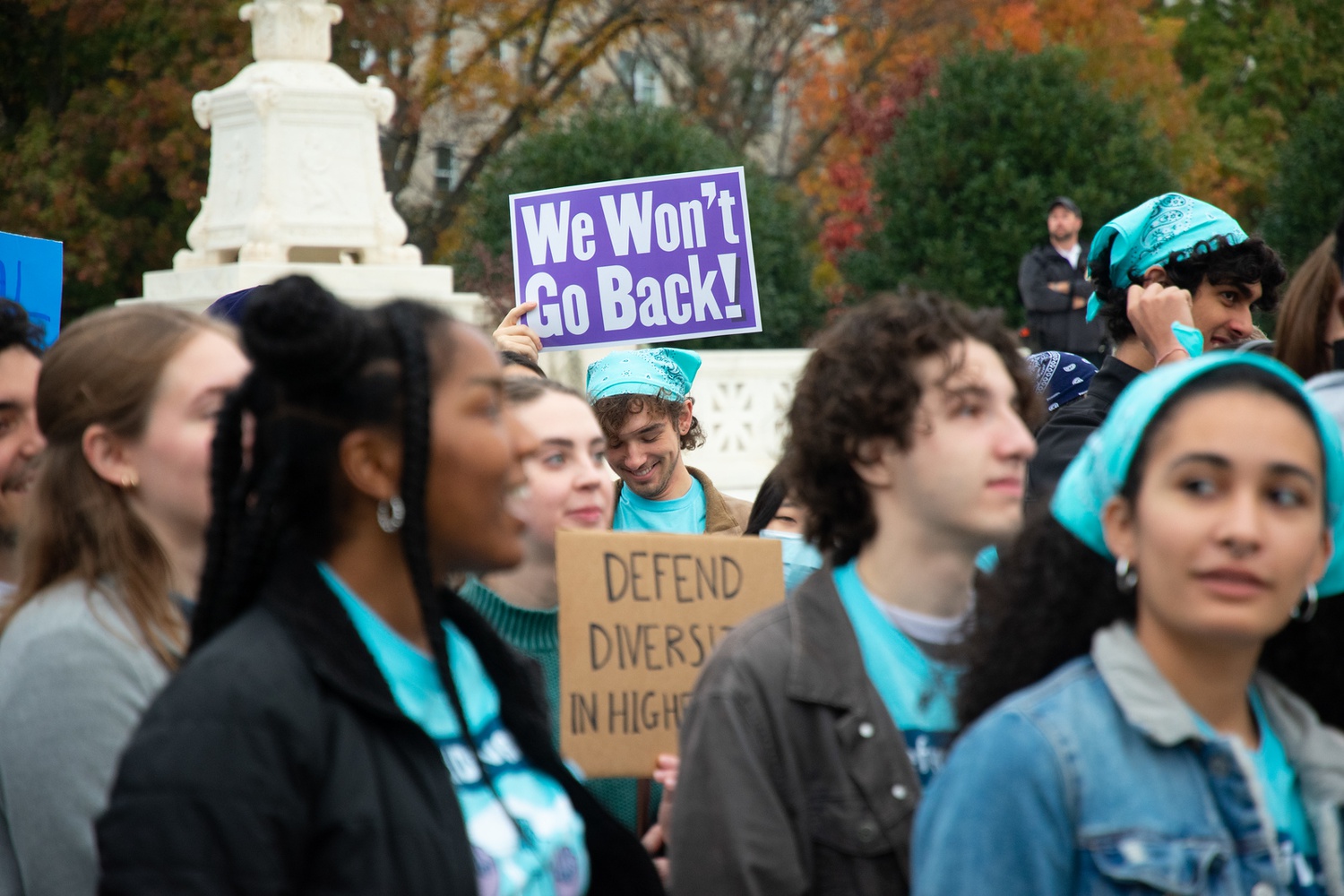 Hundreds of students from around the country traveled to Washington over the weekend to demonstrate ahead of the case. David A. Spicer, the student body president at MIT, waited in line beginning at 8:30 p.m. Sunday night to get a seat at oral arguments.

“A lot of students are interested in this issue, so I wanted to be here as the conversation was taking place,” he said.

​​—Staff writer Rahem D. Hamid reported from Washington. He can be reached at rahem.hamid@thecrimson.com.

—Staff writer Nia L. Orakwue reported from Washington. She can be reached at nia.orakwue@thecrimson.com.

​​—Staff writer Vivi E. Lu reported from Cambridge. She can be reached at vivi.lu@thecrimson.com. Follow her on Twitter @vivielu_.