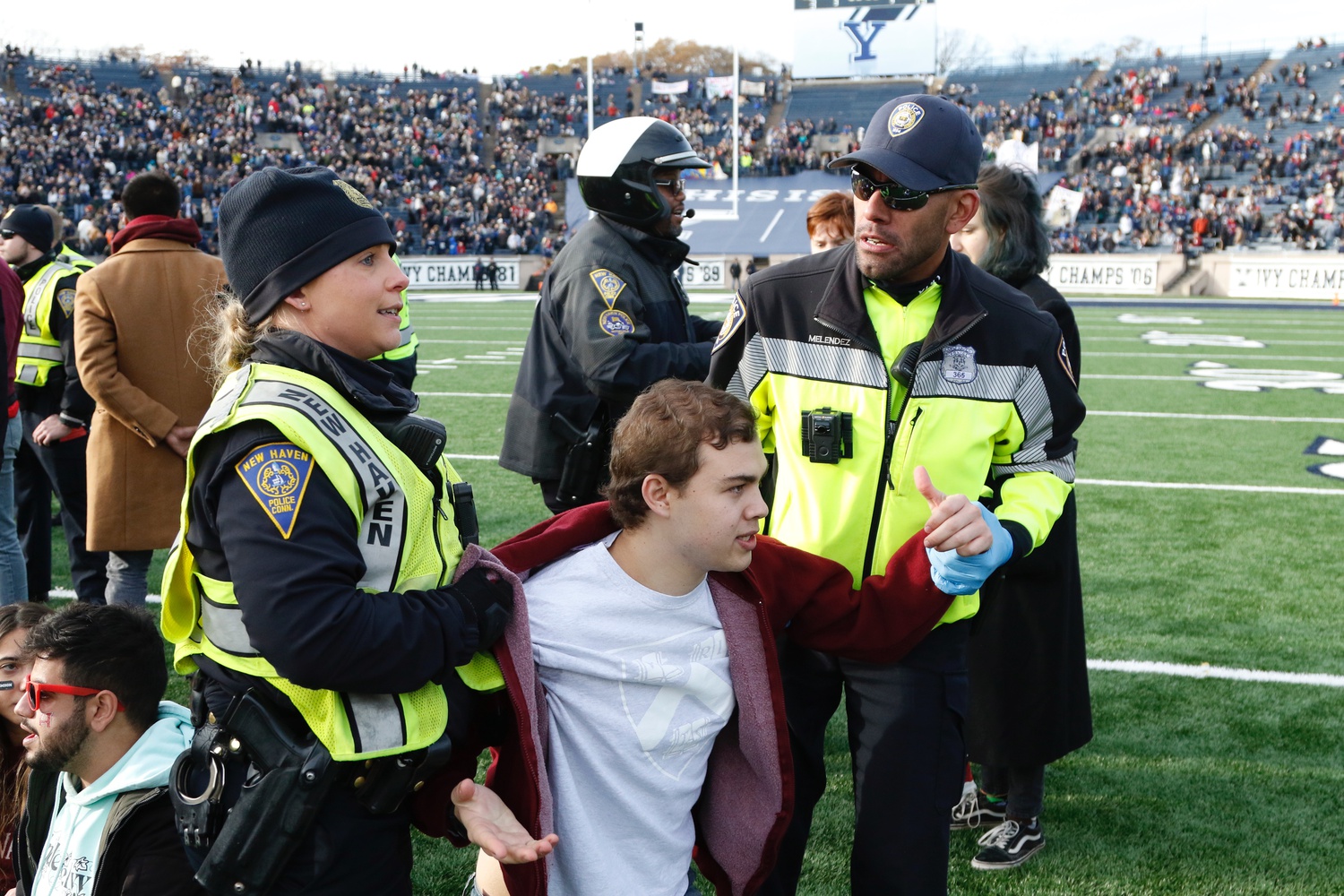 Police officers confront Harvard protester Andrés de Loera-Brust '20 on the field of the Yale Bowl. Divest protesters from both Harvard and Yale stormed the field during halftime of the 136th edition of the Game. By Timothy R. O'Meara
By Michelle G. Kurilla, Crimson Staff Writer

NEW HAVEN, Conn. — The 136th edition of The Game came to a halt Saturday when hundreds of people stormed the field during halftime, calling on Harvard and Yale to divest their endowments from fossil fuels and Puerto Rican debt.

Dozens of protesters started running on the field roughly three minutes before halftime ended and unfurled banners calling for divestment. Several hundred spectators joined the protesters as they staged a sit-in and chanted “Divest.” The demonstration continued for about half an hour on the field until police officers arrested some protesters — who insisted they would not leave the field — and charged them with disorderly conduct. Protesters continued their chants off the field near an entrance gate to the stadium.

While some protesters stayed in the stands to hold up signs bearing slogans like “Yalies for Climate Justice,” some spectators booed the disruption. At one point, Yale and Harvard administrators including Dean of the College Rakesh Khurana walked onto the field to speak to protesters.

Dean of the College Rakesh Khurana walked onto the field to speak to protesters. He told them, 'You're not alone on this. We have to, though, create a courtesy for other students — your peers who are playing today.'

Officials made announcements throughout the protest calling on the activists to return to the stands out of respect for players. Dozens of officers from the Yale and New Haven police departments also took to the field to ask protesters to leave. After some protesters gathered outside the stadium, they continued to chant, "Disclose, divest, or this will be our death.”

The protest delayed The Game, which Yale eventually won 50-43, by more than half an hour. Forty-two protesters were arrested, according to Yale spokesperson Karen N. Peart.

Officers from the Yale and New Haven Police Departments declined to comment on the scene.

Yale sophomore Sam R. Gallen, who was not detained, said he participated in the protest because he is angered by Yale’s investment in Puerto Rican debt and fossil fuels.

“I was most motivated by essentially anger that Yale — which is a place that I call home — is still invested in Puerto Rican debt and fossil fuels, which is antithetical to what I believe in,” Gallen said in an interview immediately after he left the field. “And that if they were to ever divest, we'd have to do something to motivate that such as walking onto the field.”

Divest Harvard, one of the divestment groups who planned the protest, declined to comment on the sit-in. 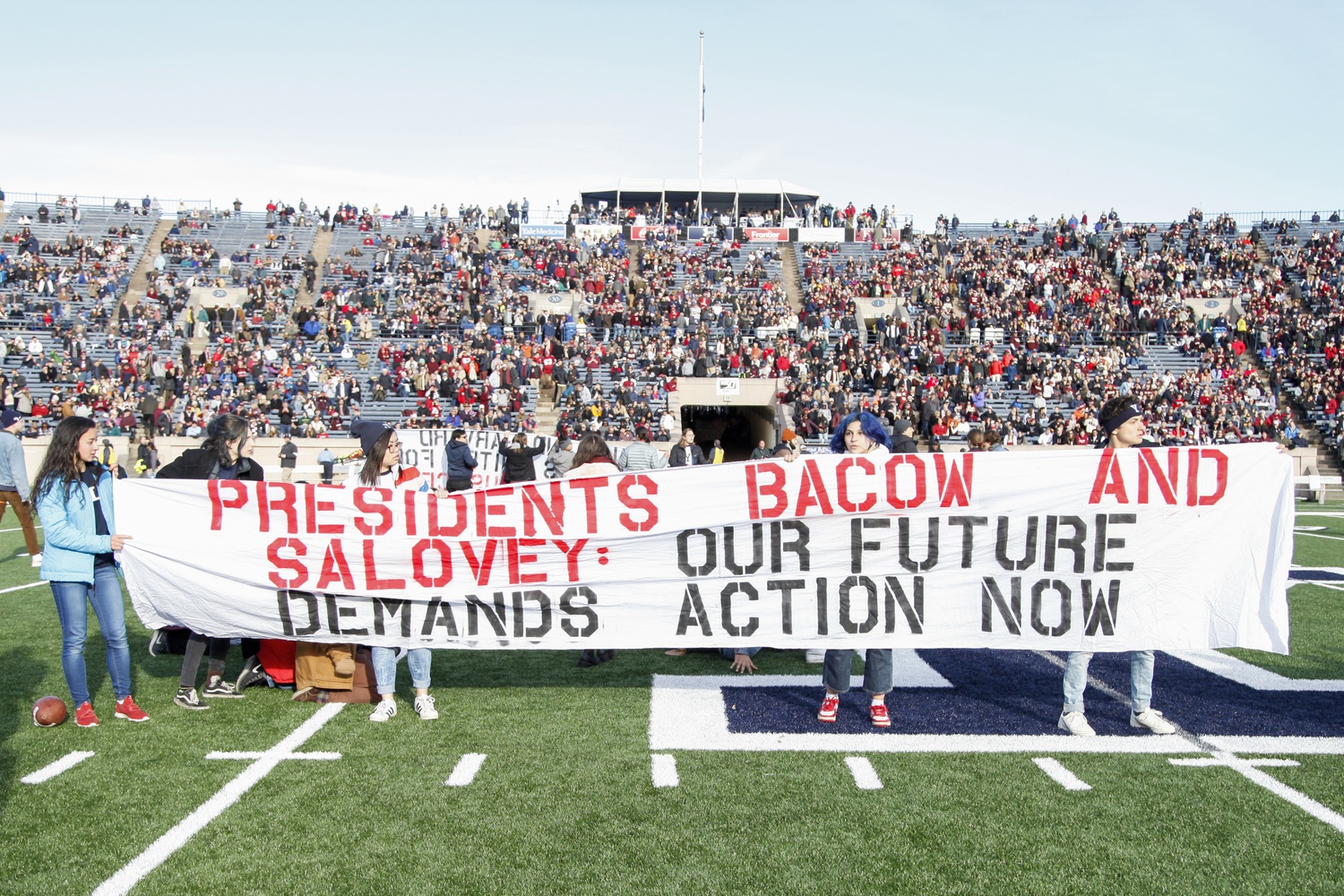 Protesters held up several large banners during the demonstration to call on the presidents of Harvard and Yale to take action. By Timothy R. O'Meara

Peart wrote in an emailed statement that though Yale supports the right to free expression, they do not allow disruption of university events.

"We are grateful to the staff members and police officers who ensured the peaceful departure of students from the field," she wrote. "The exercise of free expression on campus is subject to general conditions, and we do not allow disruption of university events."

Ivy League spokesperson Matthew J. Planto wrote in an emailed statement that the conference also supports the right to demonstrate but that they found it "regrettable" that the protest took place during The Game.

"It is regrettable that the orchestrated protest came during a time when fellow students were participating in a collegiate career defining contest and an annual tradition when thousands gather from around the world to enjoy and celebrate the storied traditions of both football programs and universities," Planto wrote.

Fossil Free Yale, a co-organizer of the protest, announced in a tweet Saturday that they are raising money through GoFundMe for legal fees for arrested protestors. They currently have a set goal of $20,000.

According to their page, many activists were charged with disorderly conduct, the maximum fine for which is $500. They wrote that they plan to use the money raised to help pay for Harvard students to attend their court dates in New Haven.

“We are raising money to pay for our legal representation, to pay any fines we receive, and to pay for the costs of organizing the action,” Fossil Free Yale wrote on their GoFundMe page. “Many of the amazing activists who were arrested rely on financial aid for tuition, and we do not wish for any student to suffer financial repercussions for participating in direct action against climate injustice.”

“I support the students, organizers, and activists demanding accountability on climate action and more at #HarvardYale,” Warren wrote. “Climate change is an existential threat, and we must take bold action to fight this crisis.”

United States Senator Bernie Sanders (I-Vt.) also tweeted that he stands with the students in their “fight” for climate justice.

“When people come together to stand up for justice, we win,” Sanders wrote. “Congratulations to the young people demanding a sustainable future for our planet. We are with you in this fight.”

Former U.S. Secretary of Housing and Urban Development Julian Castro wrote on Twitter that he is impressed by the students’ efforts to hold their universities to a high standard.

“From the March for Our Lives, to worldwide Climate Strikes, students and young people are leading the charge to protect their futures,” Castro wrote. “I’m inspired by their efforts to hold their universities to a higher standard.”

Several alumni at The Game said they are supportive of divestment from fossil fuels.

“As an alum, I think climate change is huge,” attendee Claudio L. Phillips said. “I'm so excited about the young people that are finally taking the point of this.”

He said that he did not mind the delay in The Game.

“I mean there's so many more important things than The Game,” he said. “It's about global climate change.”

The protest comes after months of divestment activism at both universities. Students, faculty, and alumni have repeatedly called on Harvard to divest its endowment from the fossil fuel industry, though administrators have refused to do so stating that the University does not use its endowment for political purposes. 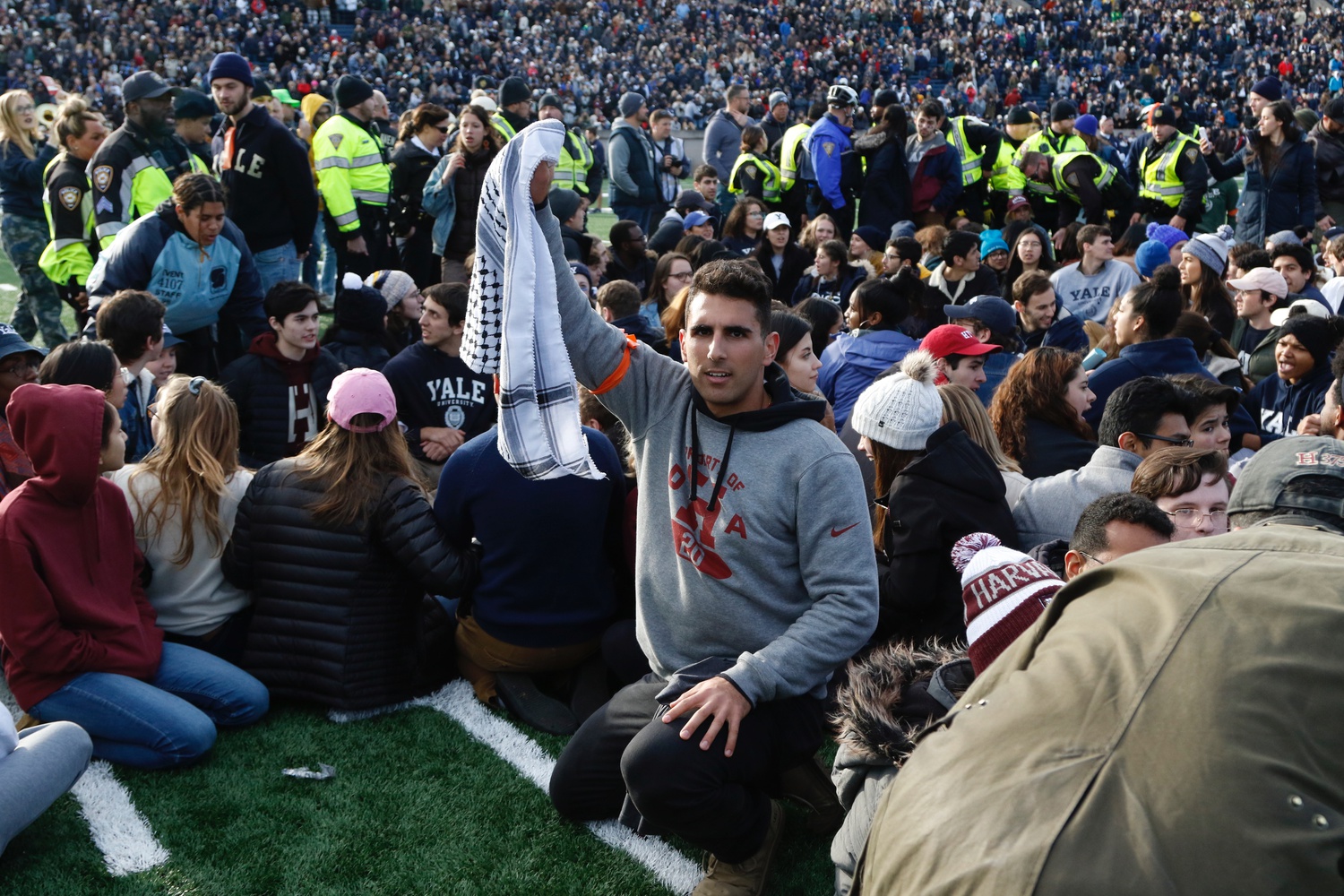 Former Palestine Solidarity Committee President Christian B. Tabash '21 raises his fist as part of the Harvard-Yale protest calling on both universities to divest their endowments from the fossil fuel industry. By Timothy R. O'Meara

Harvard spokesperson Rachael Dane wrote in an emailed statement that the University does not believe divestment is the best way to confront the "global challenge" of climate change.

"While we agree on the urgency of this global challenge, we respectfully disagree with divestment activists on the means by which a university should confront it," Dane wrote. "Universities like Harvard have a crucial role to play in tackling climate change and Harvard is fully committed to leadership in this area through research, education, community engagement, dramatically reducing its own carbon footprint, and using our campus as a test bed for piloting and proving solutions."

Similarly, at Yale, divestment activists have staged multiple protests to compel the university to take action. Last year, students staged a five-hour sit-in at the Yale Investments Office to urge the university to cancel its holdings in Puerto Rico’s debt and to divest its endowment from the fossil fuel industry. Yale Police Department officers arrested 48 people at the sit-in.

A previous version of this article incorrectly stated Sam R. Gallen's middle initial is "A."