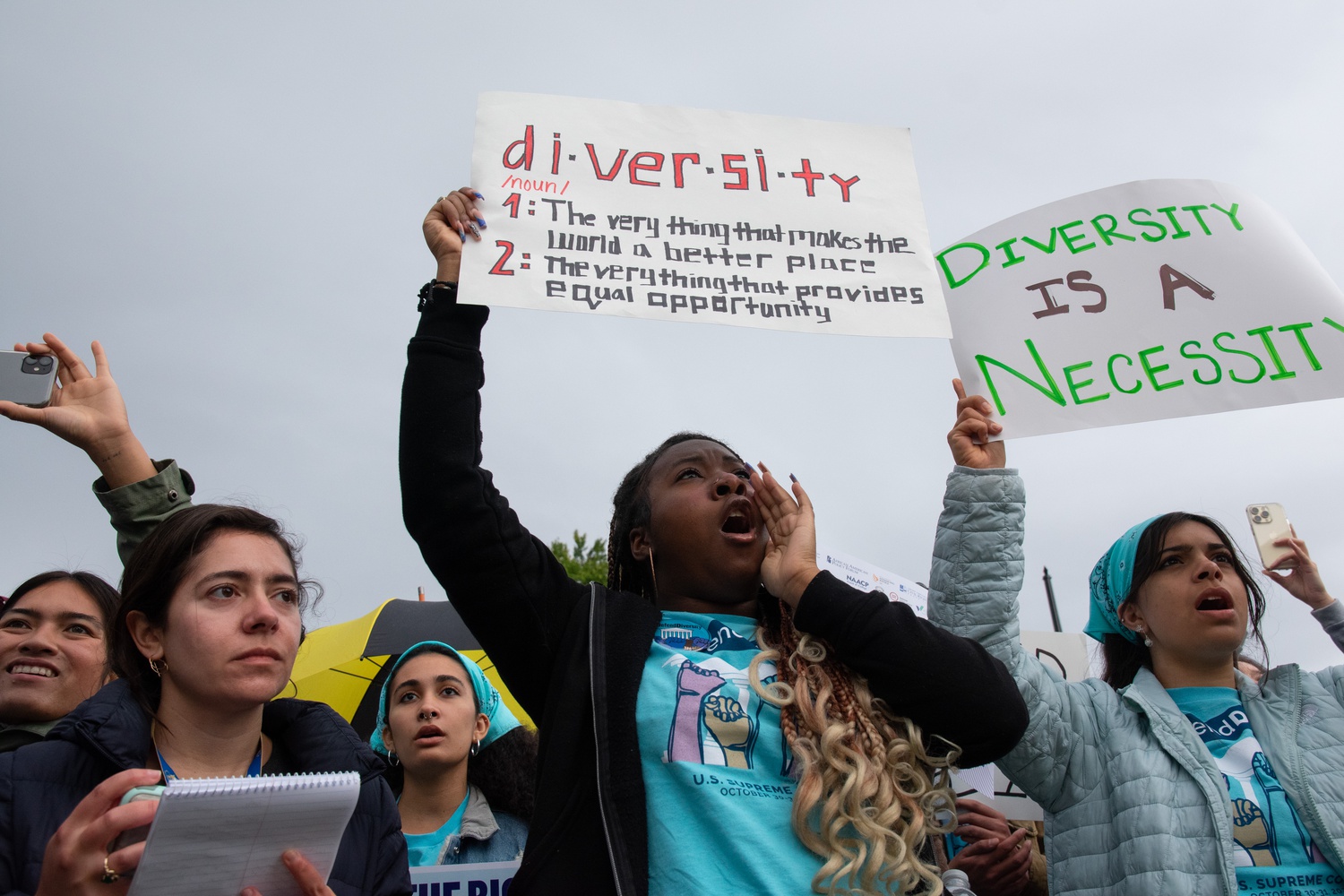 A pro-affirmative action demonstrator holds up a sign during a rally in front of the Supreme Court on Monday. By Julian J. Giordano
By The Crimson Editorial Board
This staff editorial solely represents the majority view of The Crimson Editorial Board. It is the product of discussions at regular Editorial Board meetings. In order to ensure the impartiality of our journalism, Crimson editors who choose to opine and vote at these meetings are not involved in the reporting of articles on similar topics.

This Halloween seemed to feature more tricks than treats: On October 31st, the Supreme Court heard oral arguments on affirmative action lawsuits brought by Students for Fair Admissions against Harvard and the University of North Carolina. It felt like the beginning of the end — a death knell for Harvard, and for higher education more broadly, as we know it.

Facing the likely end of race-conscious admissions, we cannot stress enough the importance of such policies in shaping Harvard’s campus — one we cherish as a socially and intellectually vibrant community, enlivened by connections that span every dimension of culture, experience, history, and identity. But beyond the significance of diversity on a college campus, and given the long and ugly history of racial oppression in the United States, institutional commitments to racial equity are also integral to our conception of a just society. If the court refuses to recognize the importance of race-conscious college admissions, it will set the nation down a dangerous path.

After centuries of racially unequal treatment, in a farcical twist, the U.S. is poised to mobilize the de jure equality of the Equal Protection Clause of the 14th Amendment against the de facto equality of Black people — the work of a court majority that stands for justice in name but not in spirit. This uncautious longing for color blindness continues a troubling threat found decades ago in the Grutter v. Bollinger decision, which famously proclaimed that affirmative action would no longer be necessary after 25 years, laughably supplanting any serious assessment of material conditions of racial equity with what amounts to the prophesying of majority-white jurists.

Even on narrowly originalist grounds, the court’s majority dispenses too readily with the persuasive argument that the 14th Amendment was not made to be color-blind. As Justice Ketanji Brown Jackson ’92 related in the context of another case, the 14th Amendment is a Reconstruction Amendment, passed in response to the end of an explicitly racial system of subjugation and meant to sweep the vestiges of that system into the annals of history. To borrow from Justice Jackson: “That’s not a race-neutral or race-blind idea.”

But since the 14th Amendment seems unlikely to stop a court that has already proven a tendency to deviate from precedent in egregious ways, Harvard has to respond decisively. This is the challenge of a generation for our university — the kind that will define its character for decades. Nothing will fill the vacuum left behind by the collapse of race-conscious admissions, but that’s no excuse for policy-void resignation; our institution cannot allow its next chapter to be written in monochromatic ink. The collapse of affirmative action must be met with righteous anger and a renewed commitment to diversity — not with an empty, subdued shrug.

We call on Harvard, for the sake of its students and veritas alike, to meet the moment with all the resources at its disposal.

First, we implore Harvard to initiate a bottom-up rethink of its admissions process — one aimed at developing new ways to preserve its racial and ethnic diversity. The University should work with its world-class scholars in African American Studies, Economics, Sociology, Statistics, and beyond to develop a new range of admissions metrics able to achieve diversity of all kinds in its freshman class (Raj Chetty comes to mind). Racial affirmative action is necessary because Black people face unique challenges across countless dimensions of American life. Surely Harvard can find novel, intelligent ways to quantify this reality for assessment in the admissions process.

Even as broader race-conscious admissions come under fire, Harvard should consider taking a narrower, lineage-based approach by accounting for those with direct descent from enslaved Americans. Such a proposal, supported by scholars like Nikole Hannah-Jones, would expand the population of generationally African-American students at Harvard — a group whose vast underrepresentation on our campus is concerning not least due to Harvard’s still-emerging history of deep ties to American slavery.

The University’s rethink must also occur at a broader level: Even as it has gradually, begrudgingly diversified across some dimensions, at no point since its inception has our University been economically diverse. No matter how many times we repeat them, the numbers continue to shock us: Nearly 15 times as many of our classmates come from the top 20 percent of the income distribution (67 percent) as the bottom 20 percent (4.5 percent); just 1.8 percent of Harvard students start life poor and end it rich.

It is a sad irony that a school hallowed for its transformative, world-changing potential hardly ever transforms the material conditions of its students — all because of who is able to make it through the front door. For decades, elite schools have been bastions of generational wealth and elite power. Now, the impending end of affirmative action threatens to put the racial character of this power differential in stark terms.

Post-affirmative action, Harvard must rethink more than just the evaluative phase of its admissions process. It is high time for the College to think about who applies in the first place — to double down on efforts to recruit applicants from marginalized backgrounds. Studies show that a majority of low-income students “undermatch,” or attend a college less selective than their qualifications would likely allow, with much of this effect seemingly resulting from limited information about what these schools are like and how to best apply. Relatively low-cost information-based interventions like help with filling out the Free Application for Federal Student Aid can have substantial impacts on college outcomes.

It is also insufficient to simply admit a diverse class without being prepared to support them. As we wait for the drop of the gavel, the College must prepare for the sharp increase in socioeconomic diversity that alternatives to racial affirmative action will likely occasion. Should these alternatives to race-conscious admissions be implemented as we hope, the Harvard of five years from now may feature many more students from under-resourced schools than at any point in its history. Accordingly, the University must be ready to engage in the careful, evidence-driven planning and massive resource commitments that may be necessary to ensure that students from all backgrounds are equally able to avail themselves of the opportunities promised by a Harvard education.

Our community is beautiful, technicolor-brilliant — our hearts ache at the thought that it might fade before our eyes. Firmly convinced of the value of diversity, we hold that there is no price too great to pay to stop this regression. Harvard should and must be willing to marshall all its experts, explore every conceivable metric, consider any possible program, and, at last, come face-to-face with the economic injustice it has always tolerated.

Harvard has a choice. It can be racially and economically diverse. Or it can be neither.