Making a Splash In and Out of the Pool: Harvard Swimmer Abby Carr Fights For Athletes' Voices on HUA 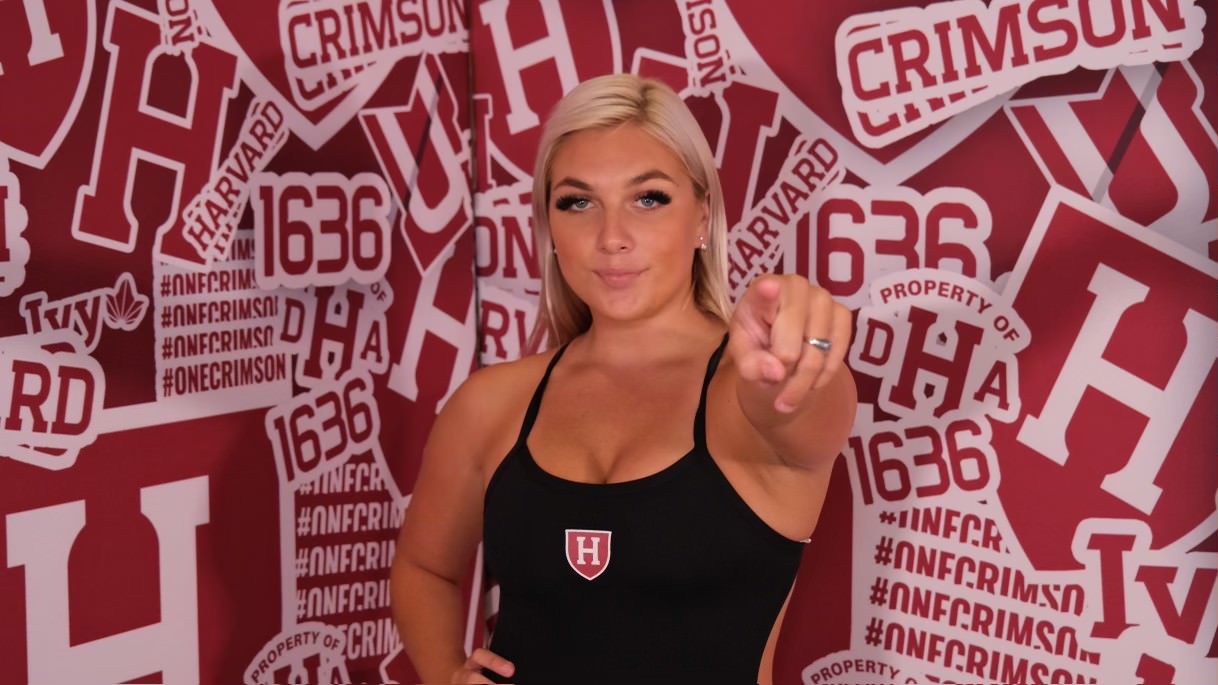 Sophomore butterfly/backstroke swimmer Abby Carr has proven herself in the pool. In high school, she garnered an array of awards, including the 2019 and 2020 Potomac Valley Athletic Conference Women’s Swimmer. She continued her success upon arriving in Cambridge, winning the 200-meter butterfly in the Ivy League Championship and placing First Team All-Ivy.

But the Maryland native wanted to serve as an example that athletes can compete off of the field, too. It all started during her freshman year, as she sought to balance her studies, swimming, and her social life.

“When I first came to Harvard, I was dealing with pretty severe imposter syndrome. For me, grappling with all of my goals outside of swimming while balancing athletics was really difficult,” Carr said. “And I had a professor tell me that my essay was really good for an athlete. And that if I had not told [the professor] that I was an athlete, he would have assumed I was a normal student.”

Carr recalled feeling disrespected by her professor’s implications that athletes were less capable of succeeding in the classroom. So, seeking to stand up for her fellow athletes, Carr set her eyes on the Undergraduate Council (UC), Harvard’s former student government, which was dissolved in a referendum in March 2022 and replaced by the Harvard Undergraduate Association (HUA).

“I watched the UC do a lot of good things for the student body,” she said. “But at the same time, I thought that we should have an athlete in there because we represent 18-20% of the student body, and that’s a very specific lifestyle and demographic that wasn’t represented. When they are planning student life events and contributing funding to projects, it can be helpful to have an athlete perspective there.”

Even after the UC was abolished, Carr was not dissuaded. Her longing for an athlete’s perspective in student government inspired her to run in the HUA’s inaugural elections in April. In her campaign, she committed to prioritizing issues pertinent to Harvard’s student-athlete community. Then, during the election, she earned the most votes in the HUA’s ranked-choice voting system, becoming one of the initial members of the organization’s nine-person leadership.

“My first project was really simple. It was making sure every single varsity team had access to the media event,” Carr stated. “Media Day is really important because it’s where we get all of the media that’s going to be presented on social media, and also serves as a form of marketing to the recruits.”

By ensuring equitable access to marketing resources, Carr was able to get each team a variety of content and aid future generations of Crimson athletes.

“The better media Harvard has, the better recruits [it] will get,” she said.

Additionally, she was able to partner with the Student Athlete Advisory Council to create unmanned fueling stations in the athletic complex for athletes to get a bite to eat before or after practice.

“Nutrition helps build muscle, which is super important for those sports like football and rugby,” Carr explained. “It’s also important for the swim team where we’re constantly burning calories that need to be replenished.”

One of Carr’s priorities in the rest of her term is to provide better resources for athletes to succeed academically despite demanding competition and travel schedules, which often cause them to miss class. During the reading period of her freshman winter, Carr had to spend five days away from campus in order to compete in the Minnesota Invitational, where she finished 15th in the 200-yard butterfly.

“It’s not the first time athletes have dealt with less than adequate administrative support for athletic absences,” she said. “But I dealt with it firsthand, and so did members of my team. There was a lot of miscommunication, where professors do not understand what it is like to compete at the highest level. So I thought I should step up and address some of the issues we were seeing.”

The lessons that Carr has learned from her lengthy career as a student-athlete have already aided her in providing perspective to the HUA.

“On a swim team, we all come from different backgrounds, different races, different stories, and different political orientations,” she explained. “And yet, when we’re in the pool, we are expected to put our team before ourselves. That perspective is important for the HUA.”

Additionally, in a sport like swimming, where races can often be won by mere milliseconds, focusing on the milieu and constantly seeking out small ways to improve is paramount. Carr credited much of her success as an athlete – and an administrator – to her ability to learn from constructive criticism.

“The fact that those minute differences in swimming races determine whether you win means that you have to listen to the feedback you’re given,” Carr explained. “Athletics trained me to see feedback [as] a good thing. And that has been very important in HUA as I am learning to navigate administration, the athletic department, and diplomatic relations with all of these different organizations on campus.”

Early in her college career, she has balanced swimming stardom, academic excellence, and her role as a representative of Harvard’s athletic community through persistence, grit, and a passionate personality.

“Abby is one of the most driven and talented people I know,” said a fellow member of the IOP, Michael Oved ’25. “Once she sets her mind to something, it happens, even when adversity is thrown her way.”

This is a sentiment shared by the members of her team.

After making an impact on her community out of the water, Carr is preparing to hop back in the pool, hoping to build off of her stellar first season. The 2022 Ivy League champions open the season on Nov. 5 by welcoming Rutgers to Blodgett Pool.
–Staff writer Thomas Harris can be reached at thomas.harris@thecrimson.com.