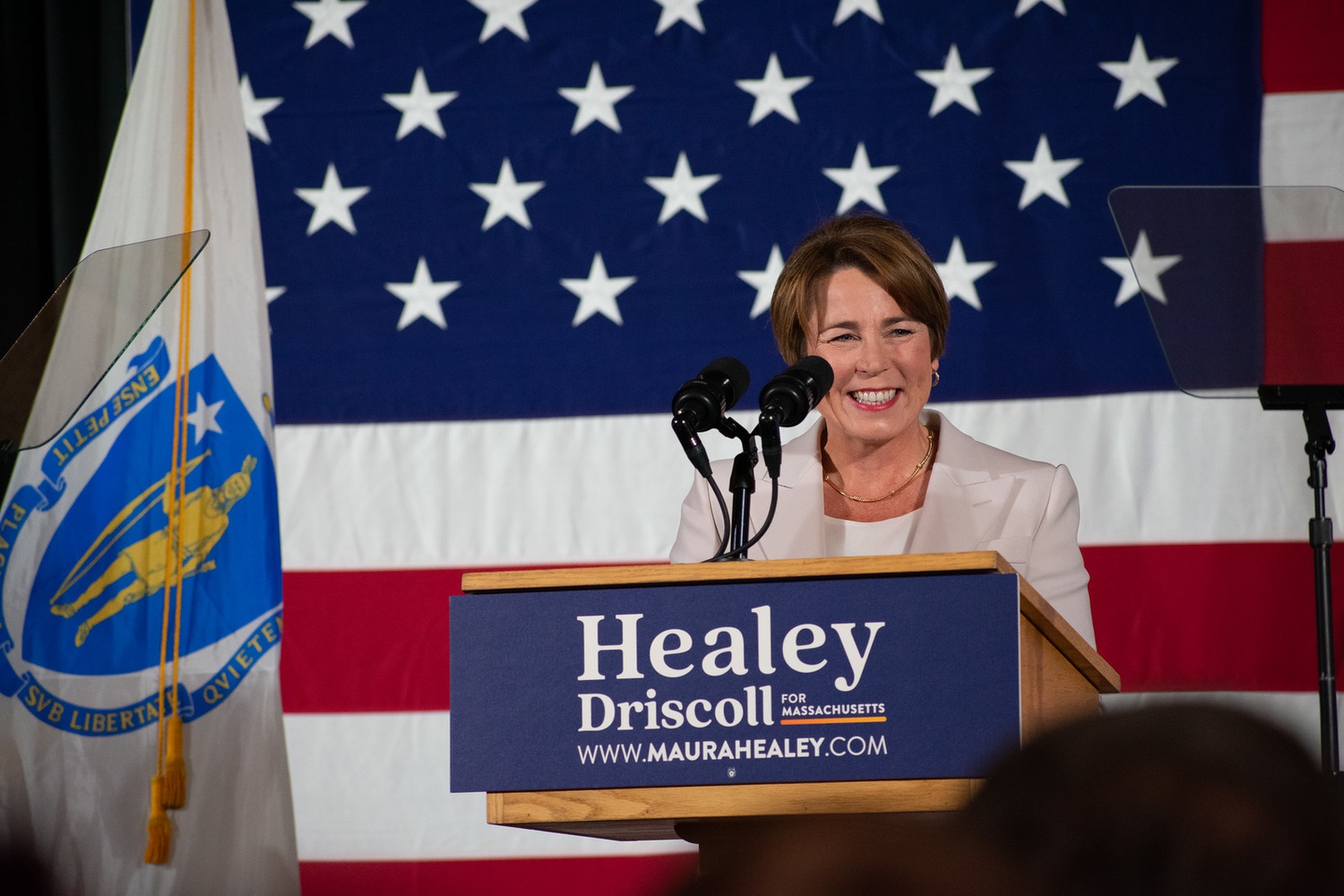 BOSTON — Maura T. Healey ’92 will become the first female governor of Massachusetts after defeating her Republican opponent, Geoffrey G. Diehl, according to a projection by the Associated Press.

Incumbent Democrat Ayanna S. Pressley won re-election to her third term in Congress for the Seventh District. She garnered nearly 85 percent of the vote, beating out Republican opponent Donnie Palmer.

Katherine Clark, a Democrat who represents Cambridge in the House, beat out opponent Caroline Colarusso for the Fifth District. 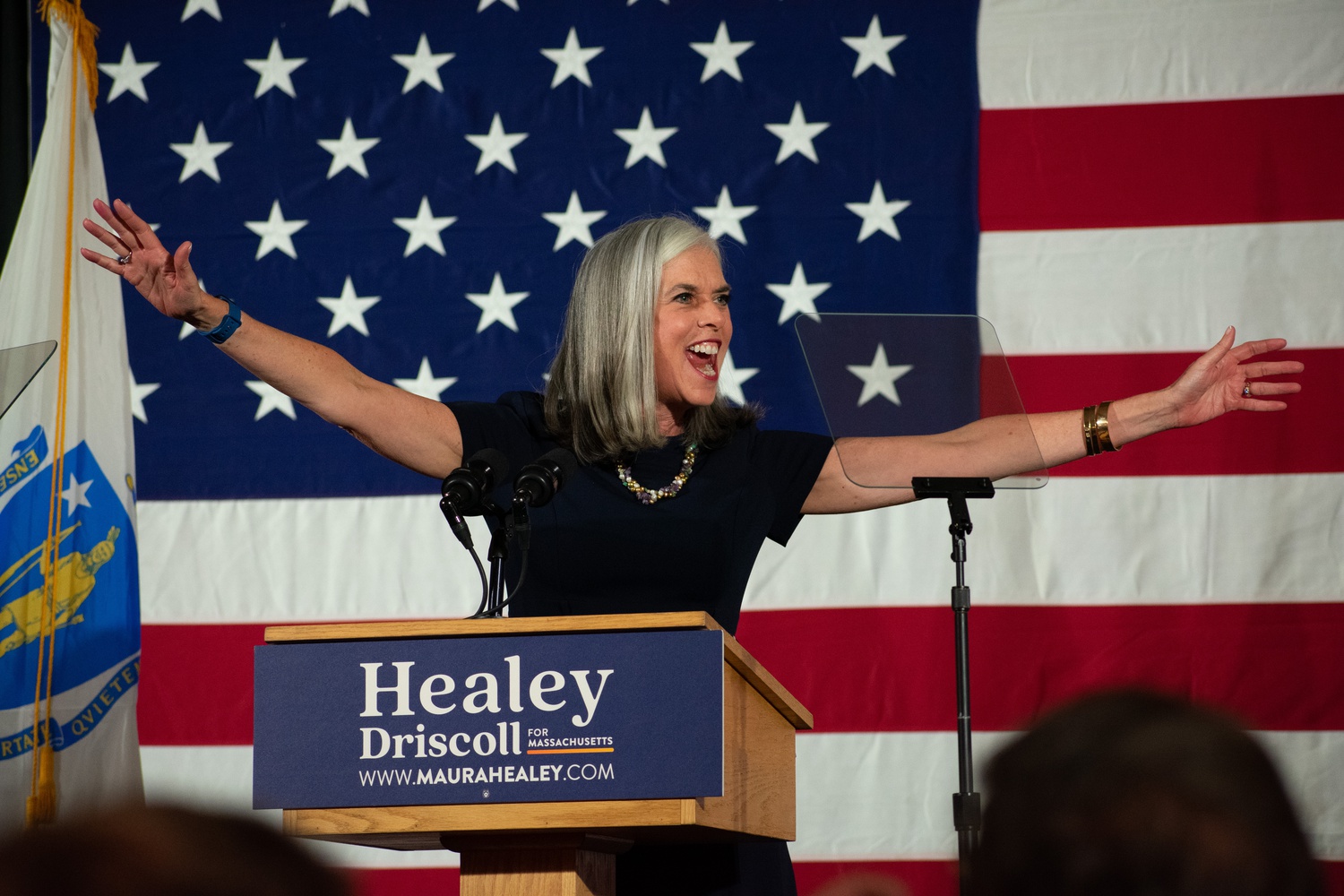 Amid shouts of “Don’t concede” and “Every vote counts,” Diehl conceded the state's top post to Healey in a speech around 11 p.m.

Diehl's concession came roughly three hours after the Associated Press called the race for his opponent.

In his speech, Diehl affirmed the legitimacy of the election and urged voters who had supported him and his running mate Leah Allen to respect Healey's win.

"The people of the Commonwealth have spoken," he said. "I respect their choice, and I ask everyone who supported me and Leah to give her the same opportunity for success that I would have asked if the shoe had been on the other foot."

He called on Healey's administration to adopt "a more reasonable timeline for achieving energy goals" and to approach tax policy with caution.

"Though our campaign ends today, the work to create a better Massachusetts doesn’t end," Diehl said.

Democrat Andrea J. Campbell declared victory in the race for state attorney general at around 10:25 p.m.

The Associated Press has not yet called the race.

Campbell would be the first Black woman to hold statewide office in Massachusetts.

“Massachusetts, I am humbled and honored to be with you to celebrate this history-making night,” she said, claiming victory over Republican James McMahon.

“Women will truly lead Massachusetts forward, and it’s about damn time,” she said.

“Massachusetts is home to the greatest force of grassroots organizers in America,” he said.

“I want you to know I’ll be a governor for everyone, and I’ll work with anyone who’s up for making a difference in this state,” she said. 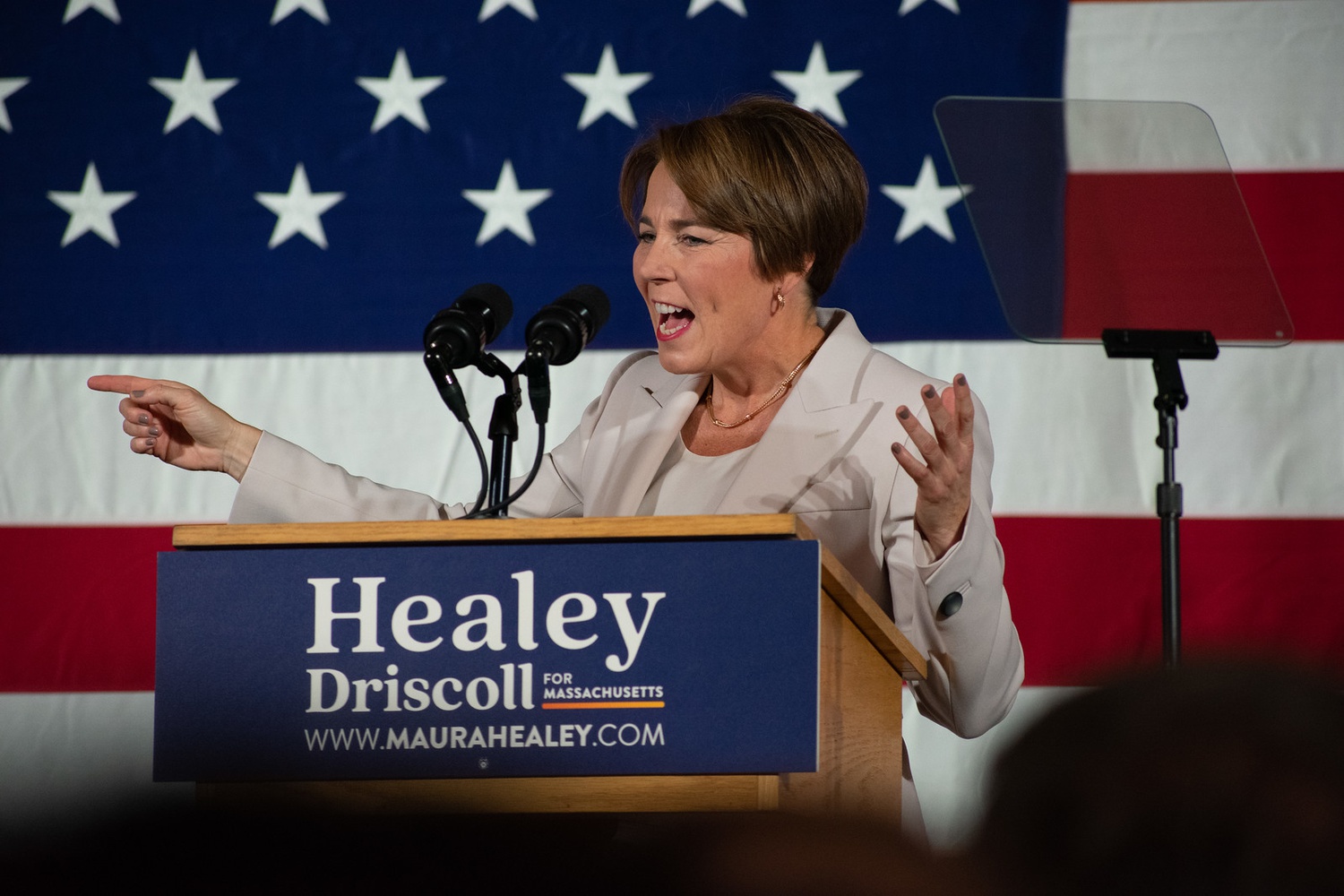 Maura T. Healey '92 took the stage at a Democratic watch party in Boston to chants of "Maura." By Julian J. Giordano

Healey said her victory sends a message to the nation.

“Tonight I want to say something to every little girl and every LGBTQ person out there. I hope tonight shows you that you can be whatever, whoever you want to be.” 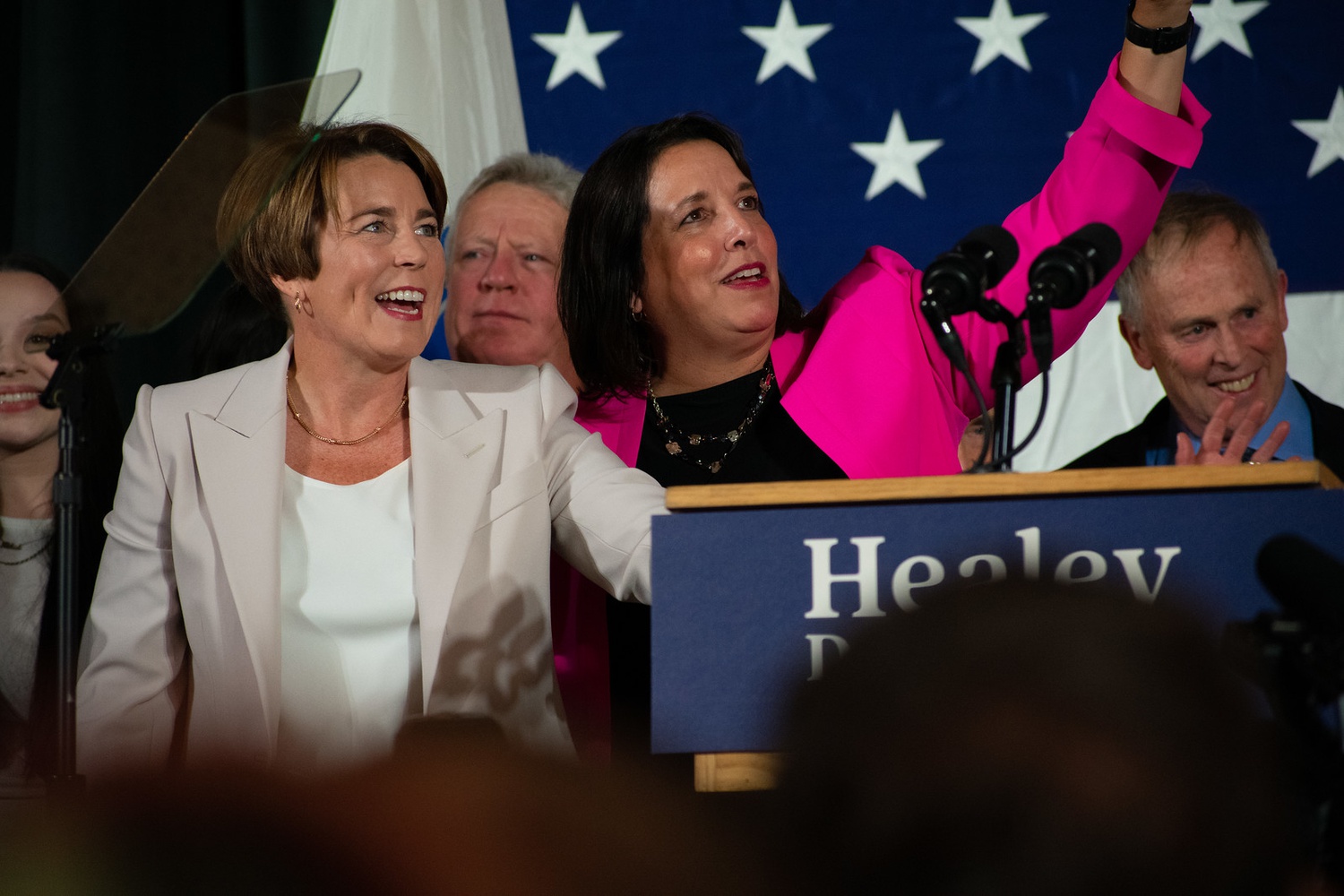 “I stand in front of you tonight proud to be the first woman and first gay person ever elected governor of Massachusetts,” she said.

Diehl has not yet conceded the race. 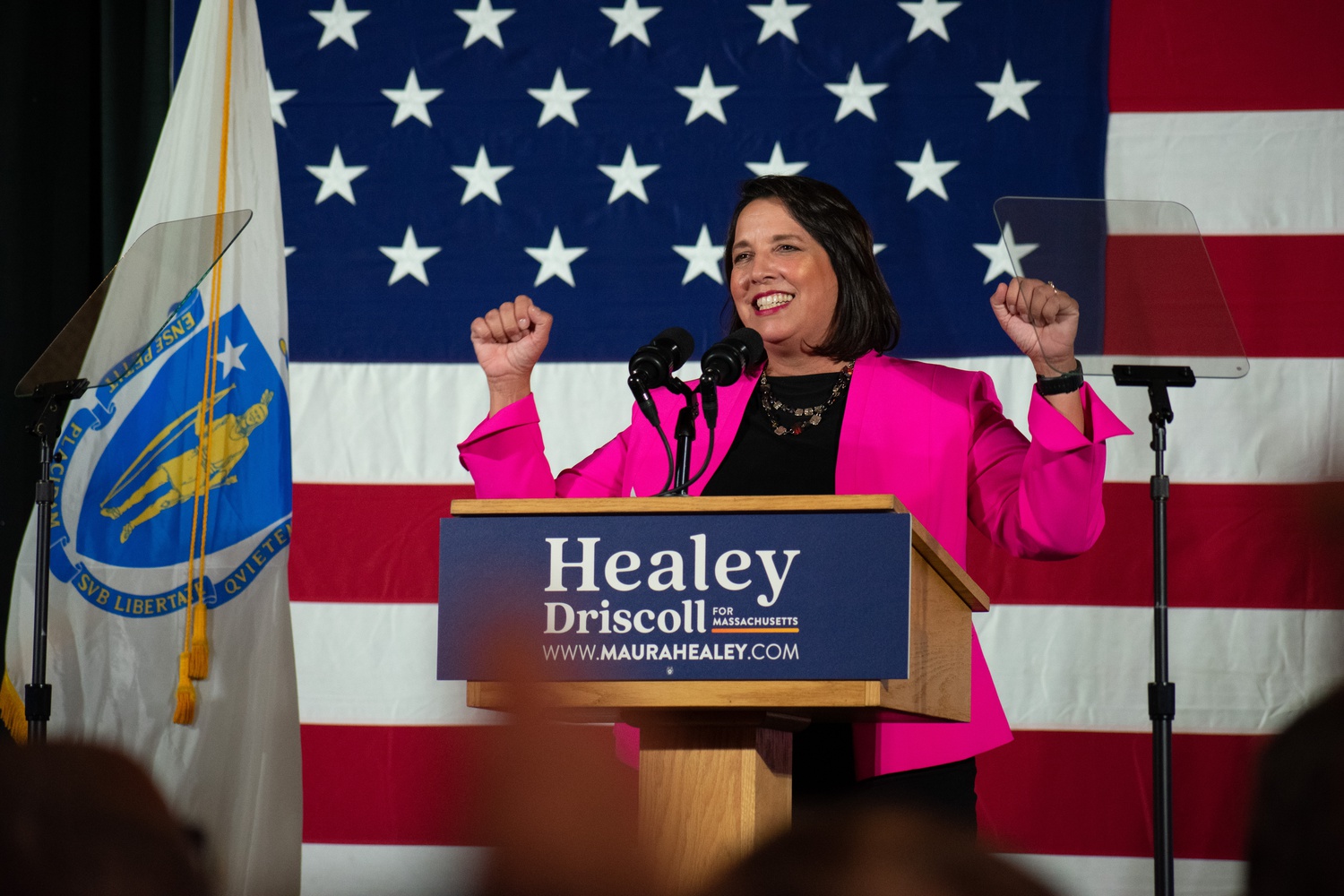 “Hey Massachusetts, tonight we made history,” she said. “Actually, we made her story.”

Driscoll expressed her excitement to serve on Beacon Hill alongside Healey.

“I cannot wait to be your teammate, Maura,” she said.

According to Driscoll, she will be the first Massachusetts Lieutenant Governor ever to be a public college graduate.

Boston Mayor Michelle Wu ’07 lauded Healey in a speech to supporters at around 9 p.m.

“Tonight, in Massachusetts, we have shattered the highest glass ceiling,” she said.

Congresswoman Ayanna S. Pressley, who is projected to win her third term tonight, told the crowd “change is on its way.” 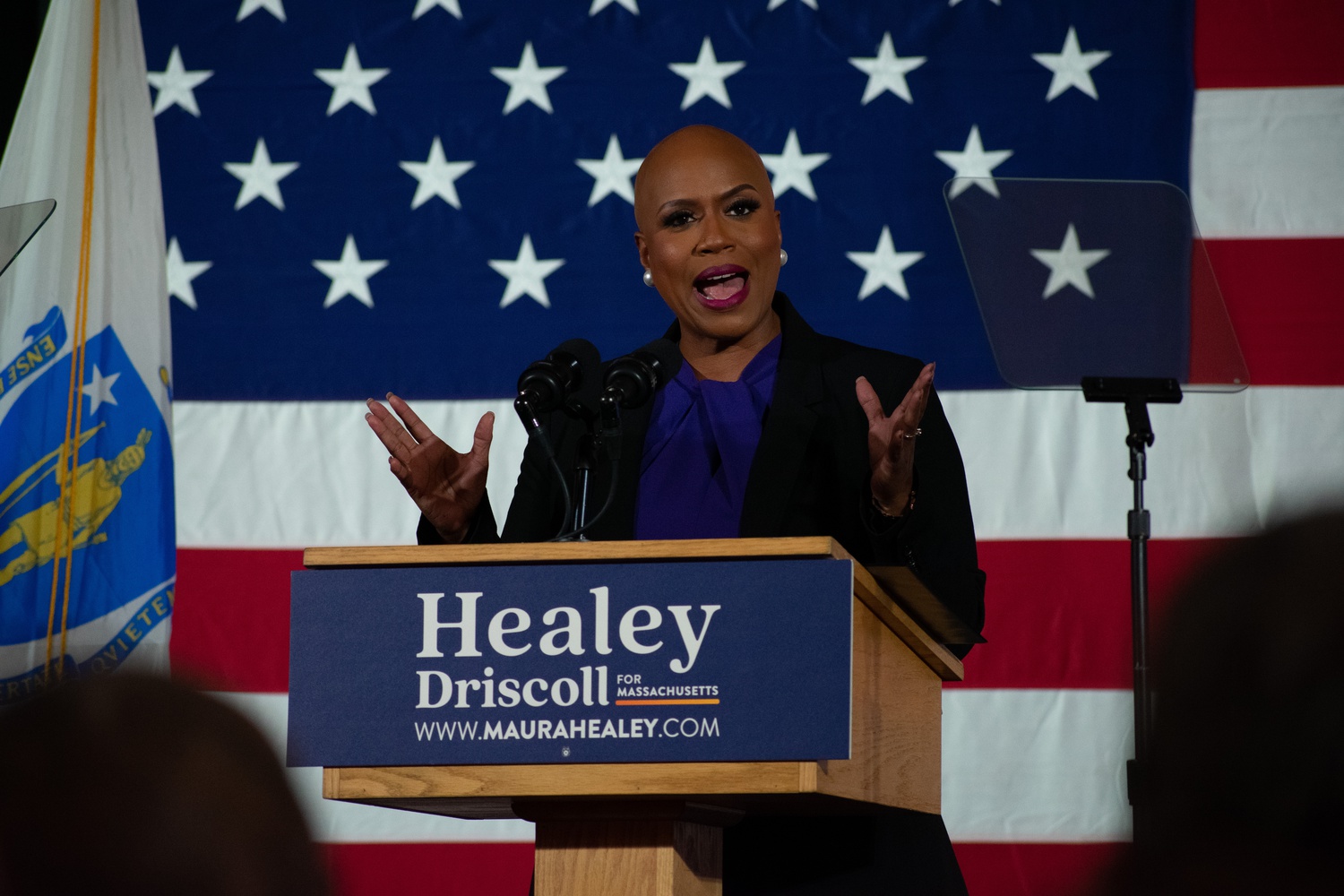 “Tonight’s results are because of good old hard work. Work women have been doing for generations,” she said.

Representative Katherine M. Clark, who represents Cambridge in the House, came on stage to celebrate Healey.

“There is no better point guard for building a better future for tomorrow than Maura Healey,” she said.

The Associated Press called the race for Healey at 8 p.m. on Tuesday, right after polls closed.

Healey will also be the first openly gay candidate to take up the post.

Healey, who handily out-fundraised Geoffrey G. Diehl, has flipped the state blue after Republican Charlie D. Baker ’79, who chose not to run for re-election, has held the office for eight years.

Supporters gathered in downtown Boston at the Fairmont hotel to watch the election results come in, buzzing with energy in anticipation of an easy victory.

Clifton Braithwaite, from Boston, said that he is excited “to break ground history.”

“I wasn’t a part of the tea party, but you know we’re rebels here in Massachusetts,” Braithwaite said.

Melody Callahan, a supporter at the downtown watch party, said she has long backed Healey.

“I have been raising money for Maura for eight years, before she even decided to run for governor," Callahan said. "I believe in everything she stands for."

“Charlie has done a wonderful job but she’s going to be an even better governor,” her husband Dennis Callahan added.

At Polls, Cambridge Voters Fear for State of Democracy — 6:30 p.m.

At the Lexington Avenue Fire House polling location in Cambridge, voters voiced concerns about the future of American democracy.

Michael W. Yogman, a Cambridge pediatrician and assistant professor at Harvard Medical School, said the midterms mark "a pretty scary time for this country" and could empower "a sweep of people who don’t believe in democracy, who think that votes that are legitimately cast are not valid."

“It puts every minority at risk," he added.

Raymond Traietti, Director of Memorial Hall, said he is most worried about the outcomes of local races across the country for positions in charge of election administration.

“Election denial is a dangerous thing,” Traietti said, adding that elective democracy is “all we’ve got.”

Jakov Kucan, a software engineer in Cambridge, said he feels people are consuming information that is “open to manipulation,” including by foreign actors.

“I don’t think that’s a given outcome, but it’s a possibility,” Kucan added. “That’s why we should go and vote, to make sure that does not happen.”

Cambridge voter Kathleen Garvey said she likes Healey, but wishes the attorney general had been “a little more present” during her campaign.

“I wish she was out there a little more,” Garvey said. “I don’t feel like she really ran.”

Kucan said that while he has appreciated the “healthy tension” and “checks and balances” created by a Republican governor in a generally blue state, he looks forward to Healey's term as governor.

“I think she has a pulse on the population of Massachusetts,” Kucan said. “I’m excited about having her as a governor.”

Here are the key races on Tuesday's ballot in Massachusetts:

Ballot Questions: Massachusetts voters will decide the fate of a recently passed state law that would allow undocumented immigrants to obtain driver’s licenses today. Voters will also weigh in on an amendment to the state constitution that would create a “millionaire’s tax” for Massachusetts’ top earners and exclusively allocate the increased revenue toward education and public transportation. If passed, the amendment would impose a 4 percent tax on annual incomes above $1 million.

Congress: All nine Democrats who represent Massachusetts in the U.S. House are considered safe in their re-election campaigns, even as the party's slim majority in the chamber appears to be in jeopardy. Neither of the state's two senators are on the ballot.