In Opening Day of Trial, Prosecutors Say Ex-Harvard Fencing Coach Traded Recruiting Spots for Payments as Part of a ‘Stream of Bribes’ 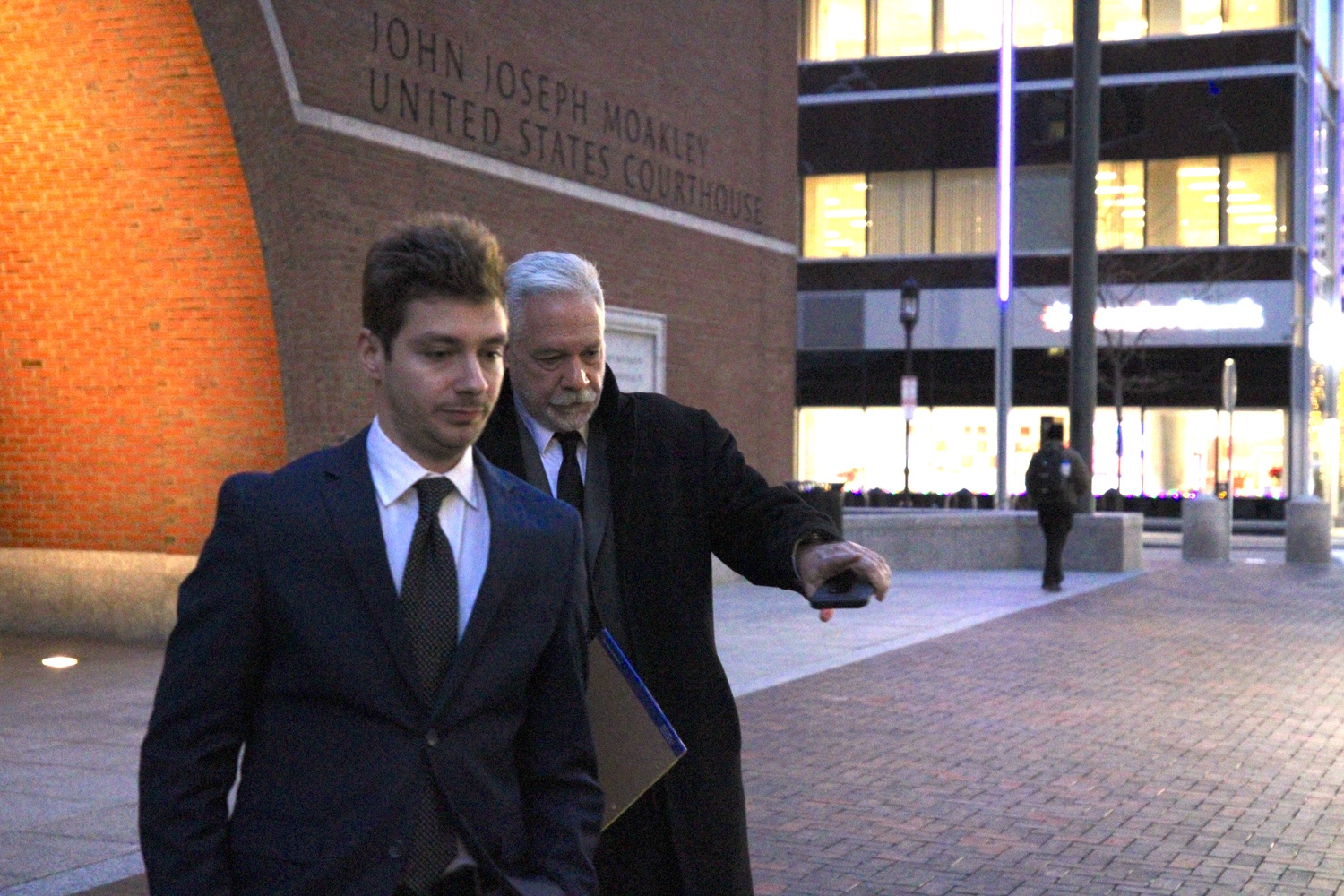 BOSTON — Federal prosecutors on Monday told a jury that Harvard’s former longtime fencing coach, Peter Brand, leveraged his team’s recruiting spots for more than $1.5 million in bribes from a wealthy Maryland businessman who was desperate to get his sons admitted to the College.

Brand was struggling to pay his bills in the early 2010s when he was connected with Jie “Jack” Zhao, prosecutors said during the first day of a federal trial in which the two men face bribery charges.

“As if by magic, someone began making his bills disappear, one by one,” Assistant U.S. Attorney Ian Stearns told jurors in his opening statement. “That person paid off his loans and college tuition for his son.”

“Who paid for all those bills for Peter and why? The answer is sitting right there,” Stearns said, pointing toward Zhao, who sat stoically behind the defense table in a courtroom at the John Joseph Moakley U.S. Courthouse in downtown Boston.

Brand and Zhao were arrested in 2020 and later indicted by a grand jury on bribery charges. As part of the bribery scheme, prosecutors say, Zhao bought Brand’s home for almost twice its market value, paid off the coach’s loans, and covered his son’s college tuition.

A defense attorney for Brand, who was fired by Harvard in 2019, painted a starkly different picture during his opening statement Monday, telling jurors that the government has “chased newspaper headlines, rushed to judgment, and ignored all the facts.”

Lawyers for Brand and Zhao told jurors that Zhao’s two sons, Eric Y. Zhao ’18 and Edward Y. Zhao ’21, were accepted to Harvard on their own merits. The boys “checked off every box imaginable,” said Douglas Brooks, Brand’s attorney.

“This is a friend loaning a friend money,” Brooks said of the payments Zhao made on Brand’s behalf between 2012 and 2015, adding that they were all later repaid with interest. 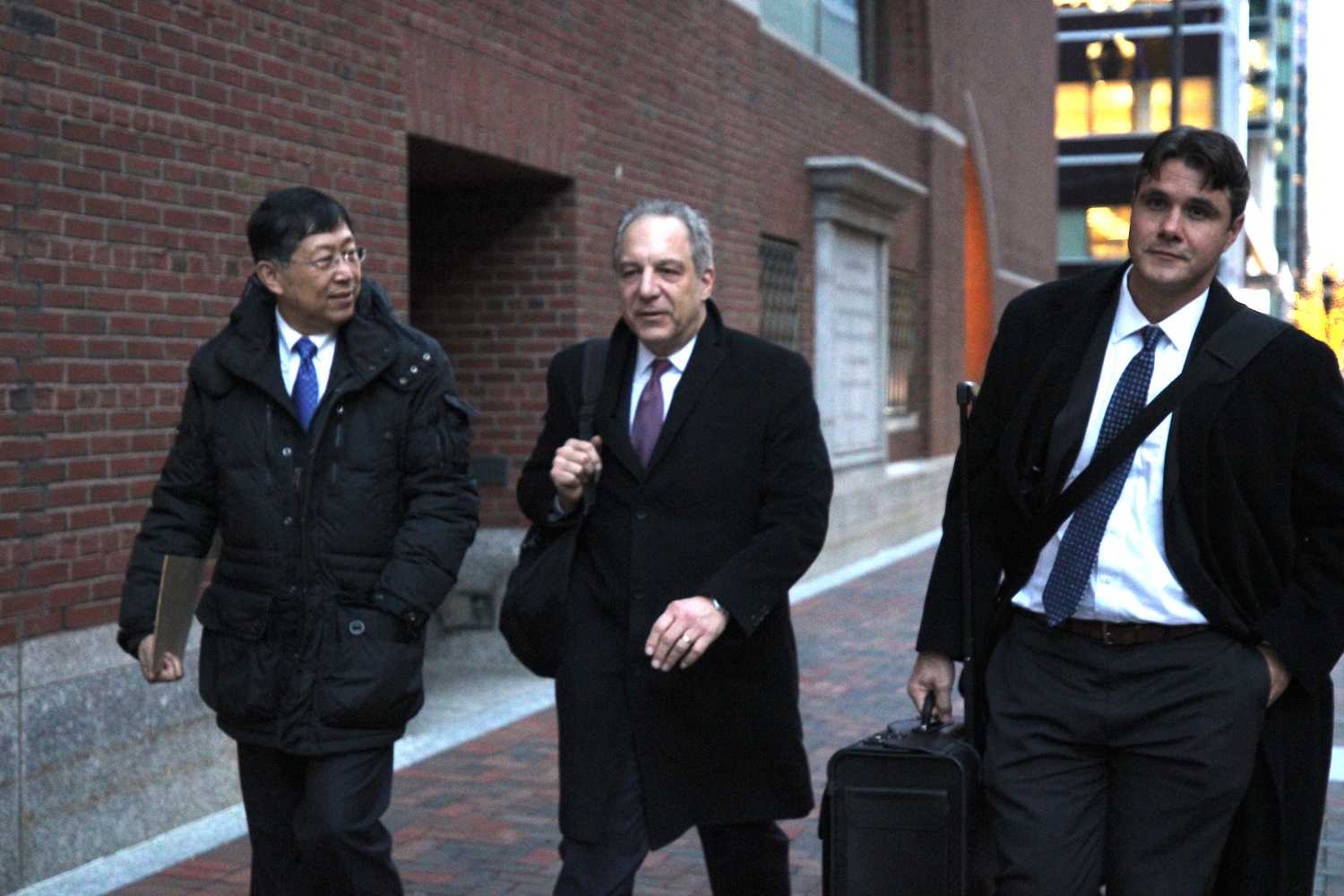 Following opening statements, a key government witness, Alexandre Ryjik, who coached Zhao’s sons at a Virginia-based fencing academy he founded in 1991, told jurors he acted as the middleman between Zhao and Brand in the bribery scheme.

Defense attorneys painted Ryjik as a liar and an unreliable witness who is cooperating with prosecutors to avoid his own criminal liability.

“Ryjik is a thief, a cheat, and a liar, and the government knows it,” said Brooks, Brand’s attorney.

In his testimony, Ryjik admitted to paying off personal expenses with his fencing academy’s credit card, misrepresenting his fencing credentials on the academy’s website, and unintentionally underreporting its revenue on federal loan applications.

“He’s got a free ride thanks to the government, and he’s trying to take that baby all the way home here to trial,” Michael Packard, an attorney for Zhao, told jurors. “He will lie to you.”

Prosecutors say Ryjik helped carry out the bribery scheme. The Soviet-born fencing instructor arranged for Zhao to donate $1 million to his nonprofit, a sum he planned to direct to a foundation run by Brand. Only $100,000 was ultimately transferred between the two sides.

Ryjik testified that Zhao told him “more than once” his sons’ admission to Harvard “would be worth a million dollars” to him. At the time, Ryjik did not take the comments seriously, he said.

Brand wrote in a 2012 text message to Zhao that Zhao’s “boys don’t have to be great fencers. All I need is a good incentive to recruit them[.] You can tell him that[.]”

Ryjik testified that he and Brand discussed the idea of exchanging money for recruiting spots at a dinner in California during the United States Fencing Association National Championships in the summer of 2012.

Ryjik said Brand told him “he wanted his future to be secure,” offering to recruit Zhao’s sons in exchange for payment.

Ryjik and Zhao developed an escrow agreement that would direct $500,000 to Ryjik when each of Zhao’s sons were admitted to Harvard, Ryjik testified. Ryjik said the agreement was designed “so it looks like money goes to me,” while it was in fact intended for Brand. He told jurors that he and Zhao “discussed different ways to get the money to Peter Brand,” ultimately settling on moving the money through Ryjik’s tax-exempt foundation to one Brand would set up.

In 2013, four days after Zhao informed Brand via email that his oldest son planned to apply to Harvard College, Zhao made a $1 million donation to Ryjik’s nonprofit, the National Fencing Foundation.

Ryjik testified that Brand had told him by that point he would recruit his son in exchange for payment.

“Jack Zhao’s donation to the NFF was just that: a donation,” he said.

“The evidence will show that Peter Brand lied to Harvard,” said Stearns, the assistant U.S. attorney. “He had to for this thing to work.”

“That’s what this case is about: a stream of bribes solicited and accepted by a college coach in exchange for recruiting two students,” Stearns added. “Until they got caught, Peter Brand got fired, and the scheme unraveled.”

The trial is set to resume at 9 a.m. Tuesday.