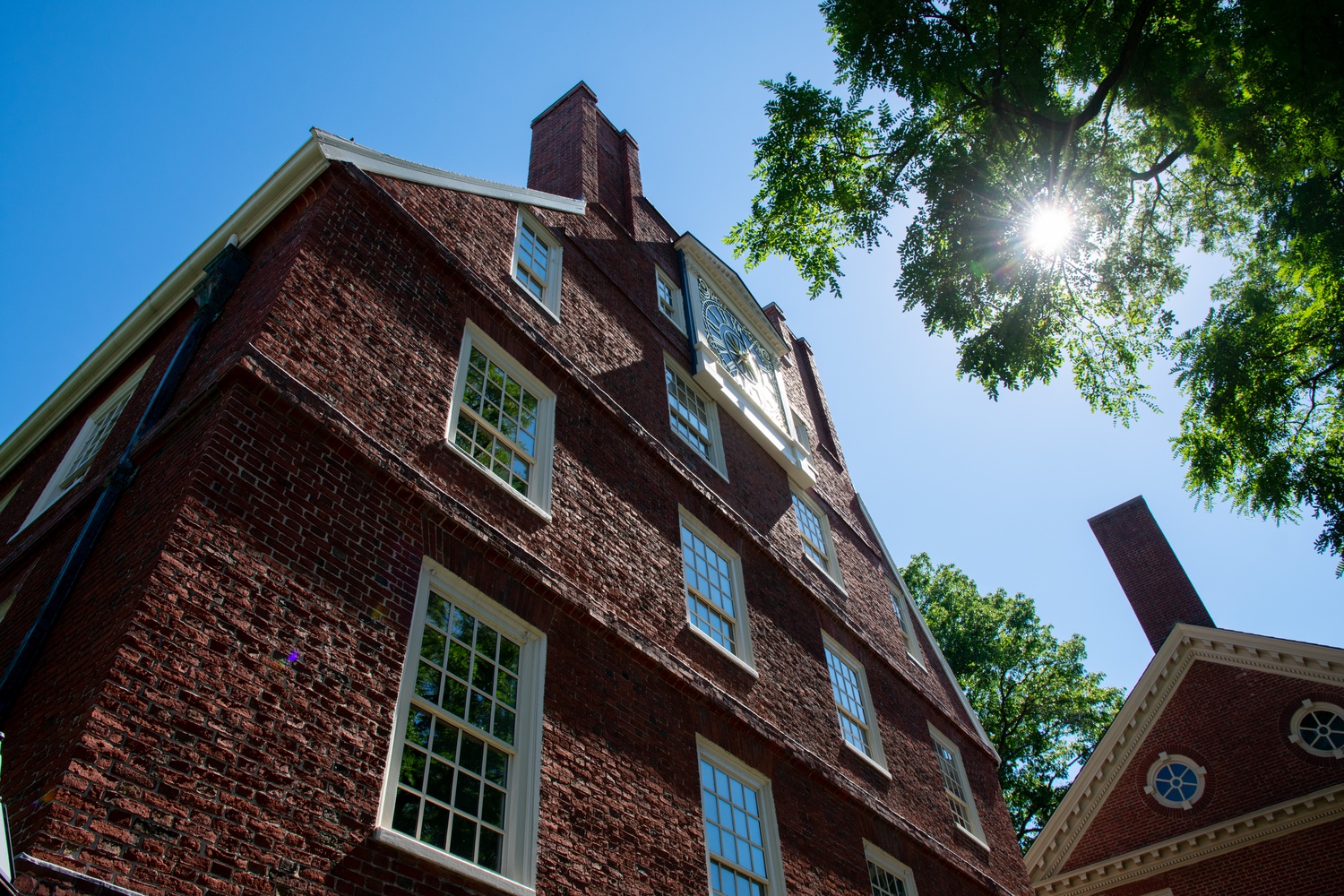 Massachusetts Hall is home to the Harvard University president's office. By Julian J. Giordano
By The Crimson Editorial Board
This staff editorial solely represents the majority view of The Crimson Editorial Board. It is the product of discussions at regular Editorial Board meetings. In order to ensure the impartiality of our journalism, Crimson editors who choose to opine and vote at these meetings are not involved in the reporting of articles on similar topics

At the end of this academic year, Harvard President Lawrence S. Bacow will depart his post. His tenure will be remembered, among other things, as one of the shortest in recent history. It will also be remembered, at least by this Board, as a time when the right of students to speak was defended, admirably, adroitly, and in the face of sometimes immense pressure to do otherwise.

Now, we are faced with the reality that as one president exits, another must enter. This is the nature of the beast: the constant question of what will come next. For 200-some-odd signatories of a recent petition, it is imperative that it be “a President who actively affirms the importance of free speech.” This appeal appears motivated by concern about the decline of discourse on this campus, a trend identified by the petitioners in a medley of incidents from the past few years.

Much like the few petitioners, this Board is deeply convinced of the power and importance of discourse. Our fundamental belief in the free press, freshly reaffirmed, is itself but a corollary of our absolute conviction that free, constructive discourse is the lifeblood of democracy. That principle is at least as true for college campuses as it is for grand, ambitious experiments in representative government. To this extent, we appreciate the spirit that animates the petition, even if not its particular form.

But the way we problematize — as well as the issues we choose to raise — matters. Our particular understanding of an issue cannot help but prefigure the solutions we will one day choose. Accordingly, it strikes us as necessary both to diagnose how our discourse fails and to improve upon diagnoses imperfectly made.

To this extent, while noble ideals brought this petition into existence, we find it worthwhile to offer our perspective on the ways in which we feel it reflects an incomplete, downstream understanding of a problem far more complex and internecine than conservative self-silencing.

Assessing this petition must begin, as all discourse should, with the facts upon which our opinion attempts to build. In our view, said facts (at least those highlighted by the petition) are far too few and too slanted. The petition isolates roughly three examples of alleged speech suppression: the disinvitation of Dr. Devin Jane Buckley from a campus speaker event; the putatively progressive language used in the University’s Title IX training; and pushback against Dr. Carole Hooven, Co-Director of Undergraduate Studies for the Department of Human Evolutionary Biology. Also mentioned are several peer-to-peer allegations of speech-motivated vitriol, seemingly directed at groups including the publishers of the Salient and the members of Harvard College Faith and Action.

First, it is worth noting despite the petition's presumably impartial “free speech” angle, nearly all of these anecdotes proffered as evidence involve speakers or entities with beliefs that would find themselves at home in corners of the (admittedly diffuse) conservative movement. Second and more importantly, beyond passing reference to F.I.R.E.’s free speech ratings, the petition relies almost exclusively on anecdotal, non-nuanced evidence — always an uncompelling approach to formulating generalizable claims and especially so when endorsed by a population not half the size of Leverett House.

We do not say this to take aim at the petition or its (regrettably anonymous) signatories. On the contrary, we see clearly that this is but the latest episode in a national narrative long beset by half-truths and fallacies. Discourse in a polarized democracy has a nasty habit of eliding the facts once the sides of the debate have coalesced into place, taking as self-evident the flimsy, folk-wisdom propositions that delineate its terrain.

That dynamic is particularly dangerous when the media’s incentives disfavor the exposition of counternarratives. As an opinionated appendage of a news organization fastidiously kept separate from decisions pertaining to reportage, we can imagine the pressure felt by our other half to appear even-keeled and apolitical in this profoundly political milieu — to signal, sometimes to the point of excess, that you are covering the right fairly. In this Board’s view, that The Crimson reported on this lightly-peopled petition at all attests that, at least when speaking on free speech, incentives favoring staid nonpartisanship can mislead news organizations into over-amplifying the arguments made by the right.

This is how anecdotes of conservative silencing become cases for free speech crisis unto themselves while the treatment of pro-Palestinian speech, almost certainly more vitriolic, never seem to be cited in the same breath.

Poisoned at the root by the errors of the national narrative that seeded it, this petition mischaracterizes a class of deep, imbricating failures in our discourse as simply a problem of free speech. Scattered instances of silencing are certainly regrettable, but the country is far too large and diverse to truly be at any imminent risk of widespread cultural censorship. Our problems are much more fundamental: We have developed a series of discursive deficits that render our conversations caustic and threaten to dismantle our marketplace of ideas.

Most notably, we are terrible listeners. Discussion, political or otherwise, is by definition supposed to be an exchange. We find truth, or aim to do so, by examining our positions in the context of others, but to do so we must make an effort to understand opposing arguments in good faith. It is tempting to train our ears to only hear the weaknesses of something with which we disagree, but in doing so we miss out on the complexities and intellectual richness that so many of our conversation topics possess. Indeed, we are often so caught in the rage of polarization that we completely ignore nuance, instead relying on partisan sentiment to guide our reaction. The issues that we face every day, especially those that involve challenging legal questions, intricate systems, or ever-evolving conceptions of both individual and collective identity, require refined thinking. We do ourselves a severe intellectual disservice by reducing them to binaries represented by catchy slogans or 30-word platform planks.

Furthermore, the goals of conversation have changed. Not only do we no longer listen to understand, but we also no longer speak to persuade. We have woven emotional stakes so inextricably with politics that the idea of someone leaving a discussion with a changed mind is almost alien. When we argue, we lose logic in the whirl of bluster and anger. We leave little room for compromise, modulation, or evolution; we look not for a constructive resolution but rather for the continued flow of dopamine from the claimed victory of beliefs we already hold.

Our discourse, in sum, is unwell, but this petition’s diagnosis is seriously incomplete. And, quietly, a failure of perhaps-greater proportions consists in what it prescribes. The responsibility for forging a path toward healthier campus conversations does not lie with any occupant of Massachusetts Hall, past, present, or future. It is ours.

Our Board remains deeply convinced of the value of student self-governance. An essential part of our experience of learning consists in taking ownership of our community and its norms, making mistakes and improving as we slouch together toward the real world. It is imperative that we embrace this opportunity to learn how to live together, how to lead, how to follow, how to have difficult conversations, and how to receive disagreement and critique especially. The world will never be more patient with us than our fellow students are.

The crisis in Cambridge and beyond is not and never was about free speech. Beneath all the noise of the national narrative about a free speech crisis lies a far more complex, insidious issue — a cavalcade of linked failures in how we speak and how we receive the speech of others.

Formulating the problem in this way, clear-eyed and honest, is a necessary precondition for the collective project of its resolution. And, inasmuch as self-silencing is a widespread problem, it is surely a downstream consequence of our too-hostile discursive norms. Only by working together to solve the issue at the root can we encourage all of our community members to express themselves readily, honestly, and authentically.

In this sense, ironically, to solve the free speech crisis requires we realize that it is not about free speech at all.