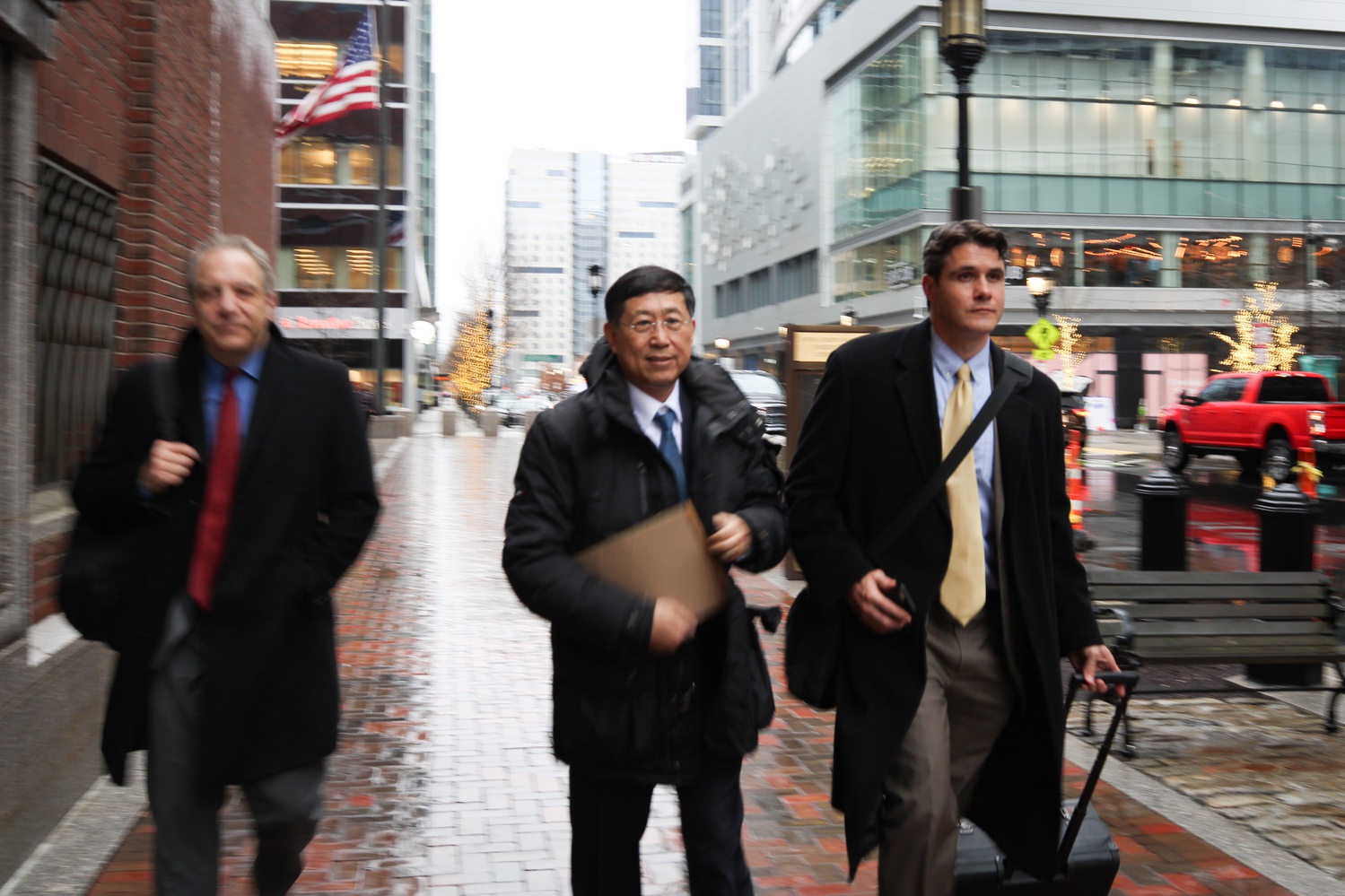 BOSTON — Shortly after the son of a wealthy Maryland businessman received a likely letter from Harvard College in 2013, Peter Brand, the school’s longtime fencing coach, had a question, a government witness told a federal jury Thursday: Where’s my $7.5 million?

Brand had arranged to receive kickbacks from the businessman, Jie “Jack” Zhao, via middleman Alexandre Ryjik’s fencing charity, according to federal prosecutors who have charged Zhao and Brand with carrying out a bribery scheme to get Zhao’s sons into Harvard.

A former lawyer for Ryjik, Darlene S. Lesser, testified that her client told her Brand “wanted to know where his $7 million was,” indicating the former Harvard coach expected millions in bribes. Instead, his charity received just $100,000 after Zhao’s son matriculated in 2014 — a discrepancy that would implode the alleged bribery scheme between the three men and lead Zhao and Brand to pursue riskier payment methods.

During the fourth day of trial on Thursday, three government witnesses took the stand — an FBI agent, Brand’s former assistant coach at Harvard, and Lesser.

Their testimony followed three days in which Ryjik, the intermediary, was questioned about his role in the alleged bribery conspiracy.

Lesser, a divorce attorney for Ryjik, testified for nearly three hours, telling jurors that her client asked her if he could legally transfer $1 million from Zhao to “a Harvard fencing coach.”

“The hairs stood up on the back of my neck,” Lesser said. “I knew it was wrong.”

Lesser said she told Ryjik the scheme was illegal, but he proceeded nonetheless — later telling her that he had found a “legal way” to move the funds through a “foundation-to-foundation transfer.”

Zhao donated $1 million to Ryjik’s charity, the National Fencing Foundation, that was intended for Brand, according to prosecutors. But only $100,000 made it to Brand, via a single transfer to the Peter Brand Foundation.

Ryjik told Lesser that Zhao asked for the remaining money back, she testified, but Ryjik declined — against her advice.

“He said there would be no further donations from the National Fencing Foundation to the Harvard fencing coach’s foundation,” Lesser said. “Alex told me that Jack Zhao asked for the $1 million back.”

Defense attorneys for Zhao and Brand sought to discredit her testimony by revealing a romantic relationship she had with Ryjik.

Lesser told a lawyer for Brand, R. Matthew Rickman, that she is “ashamed to admit” she had a relationship with Ryjik in January 2013 and later asked him to delete all text messages between them because of the affair.

Lesser, who said she was Ryjik’s “go-to lawyer” for years, joined him for lunches, dinners, and drinks that January “because he’d broken up with his girlfriend and needed an ear.”

After cutting Ryjik out of the alleged scheme, Zhao and Brand engaged in more overt payoffs, according to prosecutors — leaving behind a paper trail of checks and transactions between the two men that landed them on the front page of the Boston Globe.

The documents were presented to jurors during testimony from FBI Special Agent Keith Brown.

Brown also discussed documents related to Zhao’s $989,500 purchase of Brand’s Needham home, including a 2016 purchase agreement and emails from Zhao in which he indicated he believed the property was worth only $700,000.

The transaction aroused suspicion from the city assessor, who valued the home at around $550,000 at the time of the sale, and prompted a Boston Globe investigation that first called into question the relationship between Zhao and Brand.

Brand’s former assistant fencing coach at Harvard, Jed Dupree, said Edward Zhao was “not as good” as the other four fencers at his position on the team.

Assistant U.S. Attorney Ian J. Stearns asked Dupree to compare Eric Zhao to his teammate from the same recruiting class, Eli Dershwitz ’18, who was ranked as the top fencer in the world when he graduated in 2018. Dupree said Dershwitz was “world-class” and better than Eric Zhao.

Defense attorneys argued during the first day of trial that Zhao’s sons got into Harvard on their own merits, citing personal qualities and academic and athletic achievements.

“Peter Brand couldn’t get someone admitted just by designating them as a recruit, correct?” Zhao’s lawyer, William D. Weinreb, asked Dupree, who said he could not.

The trial will resume at 9 a.m. Friday.