Students Streak the Stress Away in Primal Scream 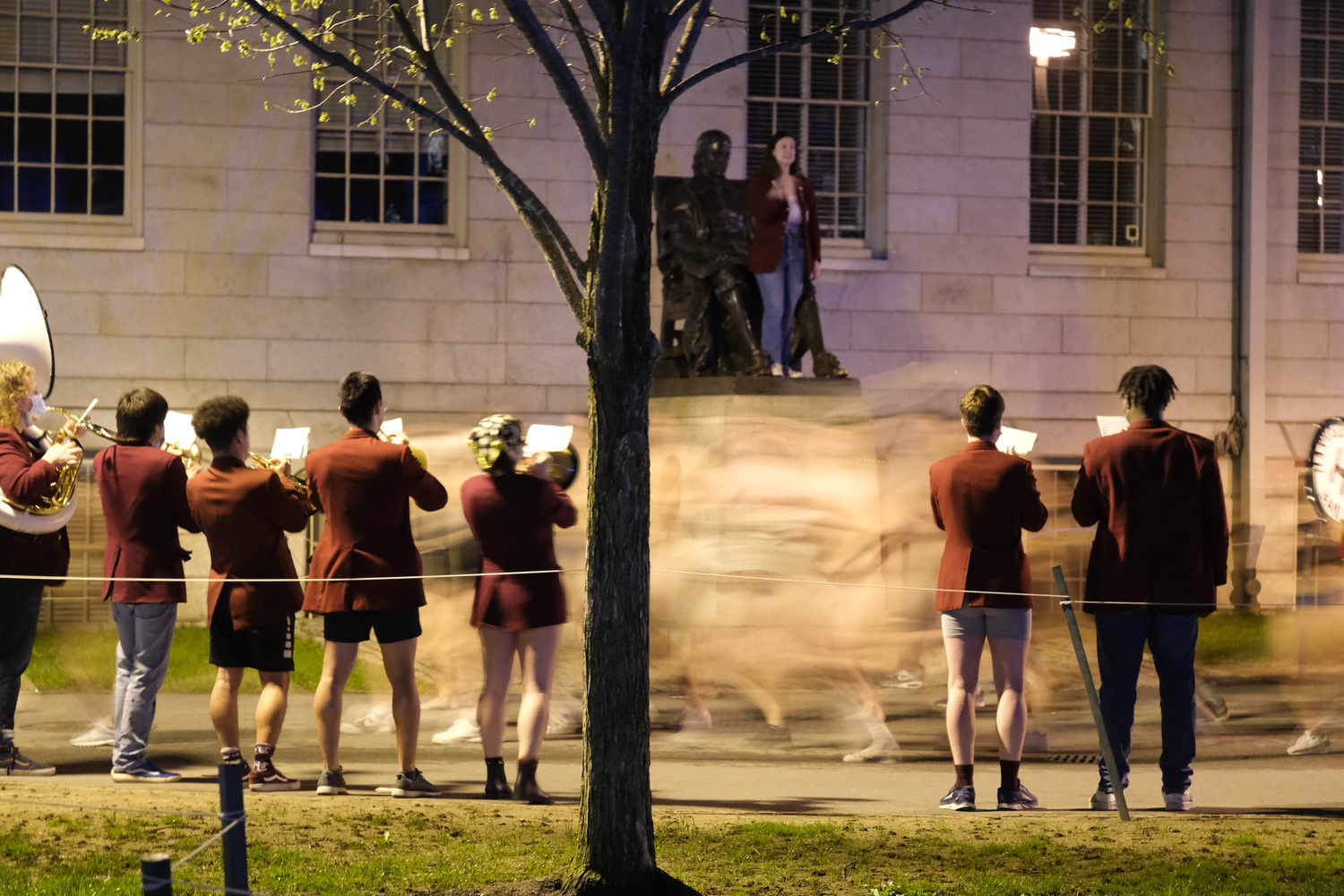 Hundreds of Harvard College students let themselves — and their clothing — loose Wednesday night, streaking around Harvard Yard on the eve of the fall semester’s final exam period.

At roughly 11:50 p.m. Wednesday night, hordes of students paraded their way to the starting line just outside Hollis Hall. When the clock struck midnight, students disrobed and began a naked sprint around the Yard. The race, known to students as Primal Scream, is the biannual tradition of running around the Yard in little to no clothing the night before the start of final exams.

The tradition dates back to at least 1995 and gives students an opportunity to strip away a semester’s worth of stress.

A semi-nude Harvard University Band provided the soundtrack for primal screamers, playing in front of the John Harvard statue as the students streaked past them on their run through the Yard.

Steven Giraldo ’26 said he had been looking forward to participating in Primal Scream for a long time.

“Since I got to Harvard, I knew I wanted to do all of the traditions,” he said. “So since this is one of the main traditions, I had to do it.”

Jooeun “June” Lee ’26 participated in Primal Scream with her suitemates, but said she is the “last person who would do this.”

“I didn’t go to the Pan Asian formal today, so I was like, ‘I gotta do something fun,’” Lee said. “When I first saw everyone naked, I was really intimidated, but once we started running, everyone was just flashing their bodies, so it was just really liberating.”

David J. Peters ’25 and Jonah J. Sorscher ’25, who both participated in last year’s editions of the tradition, said they were glad to bare it all again this year.

“People talk about it being a thing only for first-years, but it’s fun all the time,” Peters said.

“We were just talking to someone who said ‘you only have eight chances to run through Harvard Yard naked and not get arrested,’” Sorscher said. “I don’t want to waste one of them.”

The temperature hovered just above 50 degrees Wednesday night, making this semester’s Primal Scream easier to bear for participants — a welcome change for students who were exposed to the first snowfall of the season last fall.

“It felt like a nice little warm jog,” Sorscher added.

Dante C. Frinzi ’26 said he participated in Primal Scream wearing only a straw hat, sunglasses, and a chain.

“Hat did stay on,” Frinzi said. “​​The only reason why I did wear it is just in case any newcomers were recording or anything.”

When asked about his plans post-Primal Scream, Frinzi hesitated for a moment before answering.

“Probably gonna go back to the dorm and study a little bit,” he said.

— Staff writer John N. Peña can be reached at john.pena@thecrimson.com.