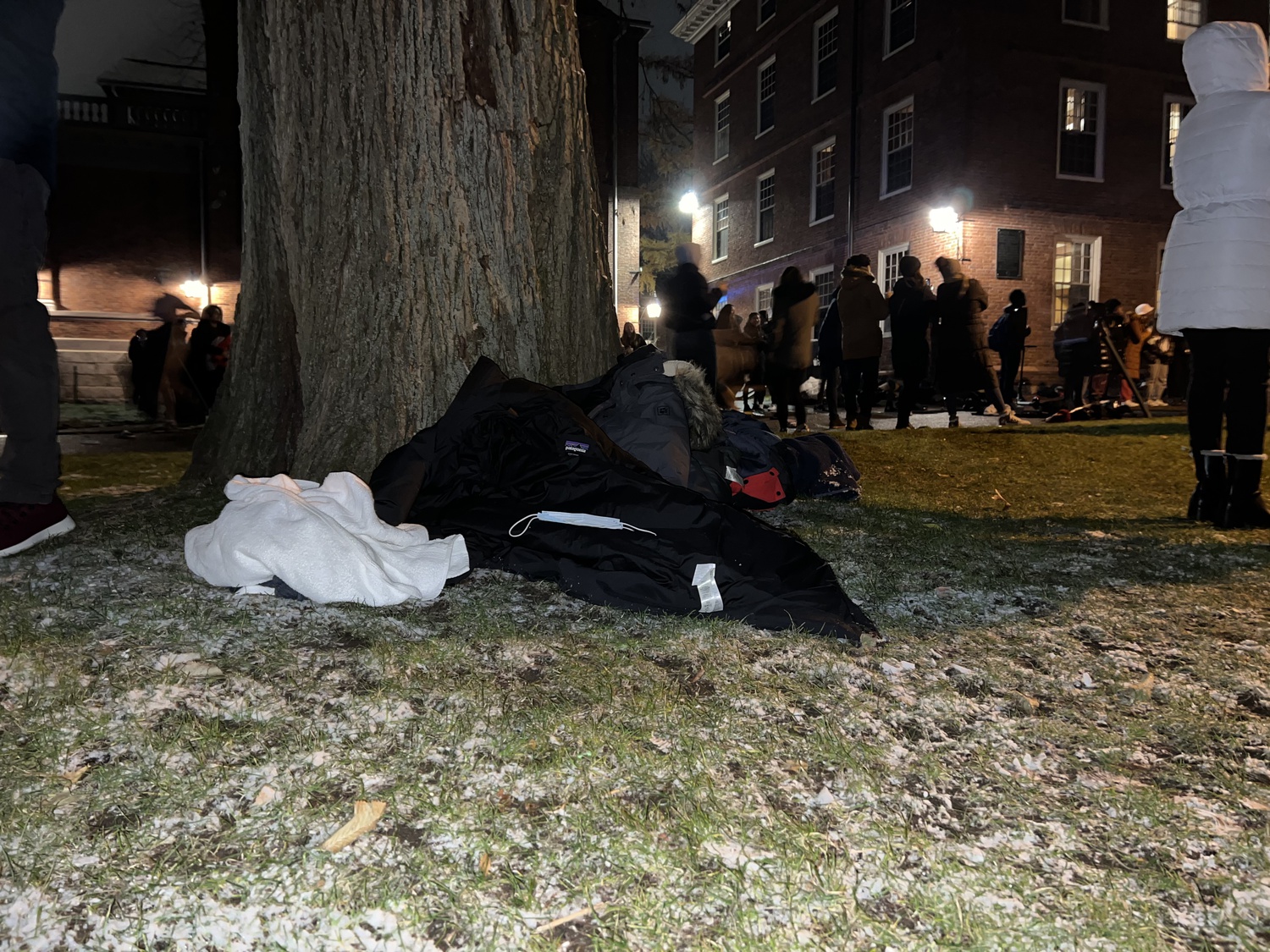 Baring it all in the season’s first snowfall, hundreds of Harvard students gathered outside Wednesday night in jackets, underwear, and little else to resume the boisterous tradition of streaking around Harvard Yard the midnight before finals.

At the stroke of midnight, students sprinted around the Yard from Hollis Hall — the starting line for Primal Scream, which biannually marks the close of reading period. Some students ran scantily-clad, others not clad at all. The tradition — which resumed after an unofficial three-semester hiatus due to remote learning — goes back to at least 1995 as a way to let loose amid the stress of finals prep.

By 11:59 p.m. Wednesday, hundreds of students at varying levels of sobriety lined up, gallivanting from Harvard Hall to Stoughton Hall. Undergraduates, jumping up and down, chanted “Olé, Olé, Olé,” “let’s go Harvard,” and the bassline of “Seven Nation Army.”

As a church bell in the distance rang out like a starting pistol, the raucous crowd tossed aside their puffer coats, towels, and undergarments for a celebratory lap au naturel as onlookers cheered from the University Hall steps. Post-run, some unclothed participants even posed in front of the John Harvard statue for group photos.

Luiz Guilherme F. “Gui” Abudi ’25, a freshman from Brazil, said he is used to more tropical weather, but that Wednesday’s snow was one of the reasons he participated in the race. Instead of his birthday suit, however, Abudi opted to embrace the approaching holiday season by sporting a Santa Claus costume.

For Abudi, his participation in the race was a spiritual experience.

“I think it’s a godsend because it was the first snow day of the year and you got to run naked in the streets,” Abudi said. “It must be something God-related, you know?”

“I thought it was going to be longer,” he said.

Benjamin J. Dreier ’22-’23 said it was “really interesting to experience nakedness,” though was unsure whether the event would relieve his stress.

Ja’Karri S. Pierre ’25 and Jose Miguel C. “Miggy” Antonio ’25 both described the experience of spectating Primal Scream as “10 out of 10.”

“It was nice seeing some of our friends go through it,” Antonio said. “Traditions like these help solidify the Harvard experience.”

Previously, Harvard University Band members clad in their signature red uniforms — sans pants — would play for the Primal Scream runners. Pierre, a band member, said the band could not make it this year, but will return next semester.

Matthew B. Karle ’23-’24 — who said he finished the run third overall — said he gave his all to achieve a podium position.

“I really put my heart into it. I’m excited for future endeavors in the sense that I think I can do even better,” Karle said, adding that he recently recovered from a hamstring injury.

“There was a substantial crowd by the finish line,” Karle said. “I appreciate the support, but what are you doing in that Canada Goose?”

Karle said it was his “dream ever since Covid” to keep the Primal Scream tradition alive and make it to the top.

“I have to thank my friends and family and everyone who supported me,” Karle said. “Maybe in the future, you’ll see me doing laps out there in the Yard, no doubt. I also did it for Dunster. Go Dunster.”