As Rockets Fly in Kyiv, Hundreds Rally for Ukraine in Harvard Yard 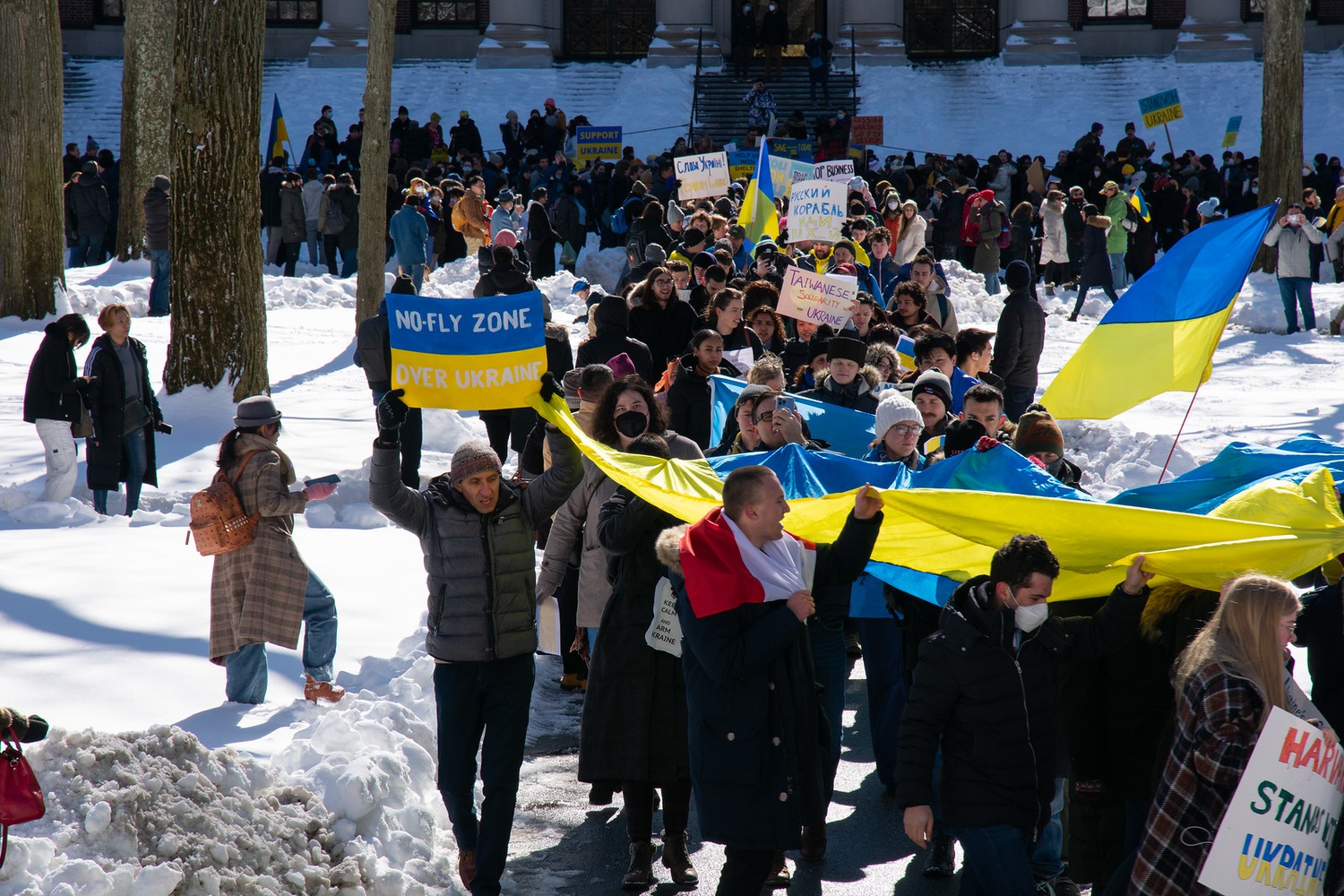 Over chants of “Glory to Ukraine” and “Putin to The Hague,” Harvard students took turns speaking into a megaphone to denounce Russian President Vladimir Putin, who rained missiles on Ukraine’s capital city Kyiv as the conflict escalated over the weekend.

Taisa Kulyk ’22, who co-organized the rally, called for Harvard students to show solidarity with the Ukrainian people.

“We wanted to show solidarity. We wanted Harvard to do something and Harvard students to unite and have this outlet,” she said.

“I think it’s not okay in situations like this to just go on with your life, or be silent,” Kulyk added.

Maksim Bahdanovich ’24, a Belarusian student who co-organized the rally, told the crowd he felt compelled to show support for Ukraine because the country had supported Belarusians — including him — when they were brutally repressed for protesting the country’s 2020 presidential election, which was deemed fraudulent by many Western countries.

“The reason why this is important to me is because when I had to flee from the repressive regime at home in Belarus two years ago, I went to Ukraine,” he said. “It has become a safe haven for me and thousands of other Belarusians who were fleeing, and now it’s no longer safe.” 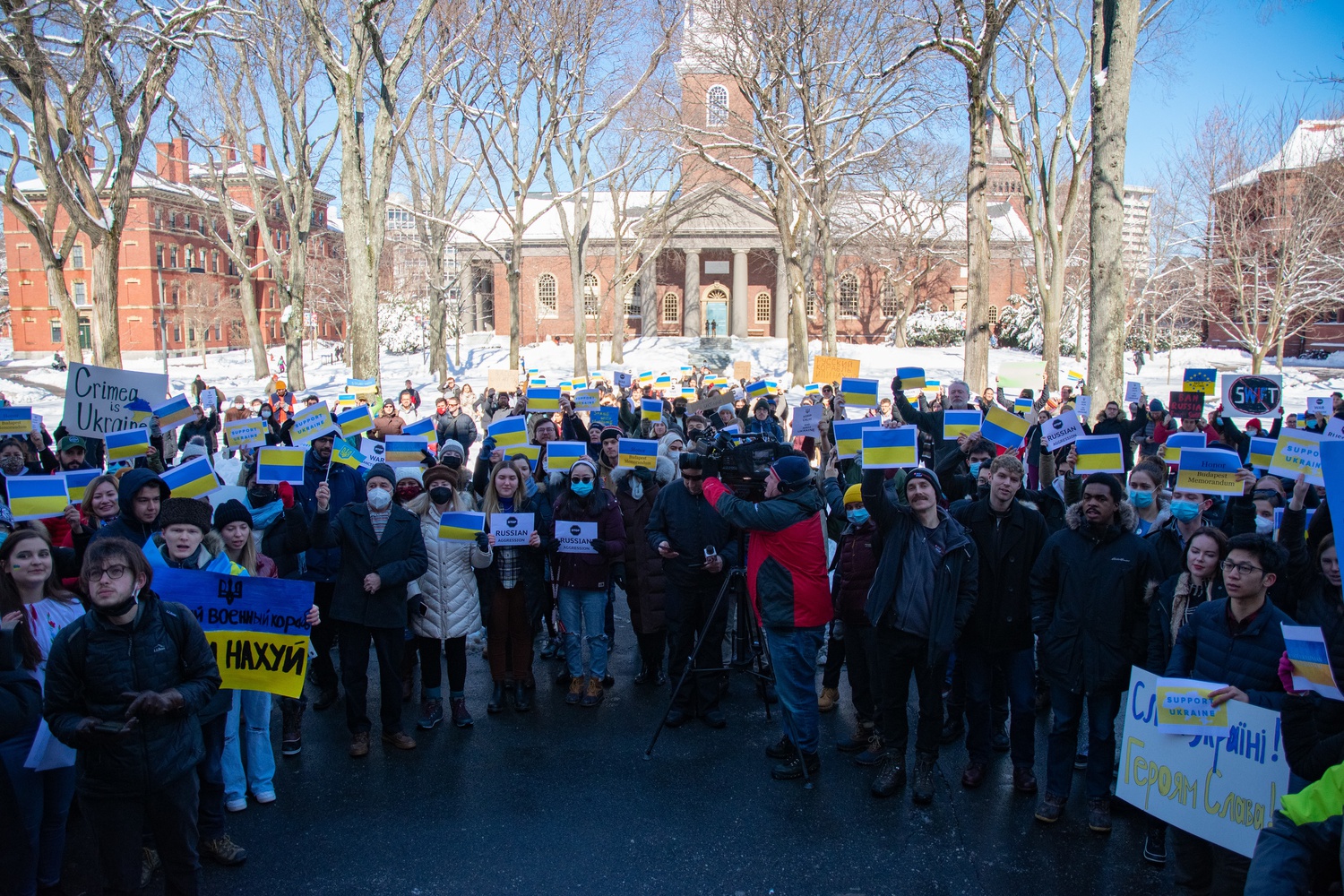 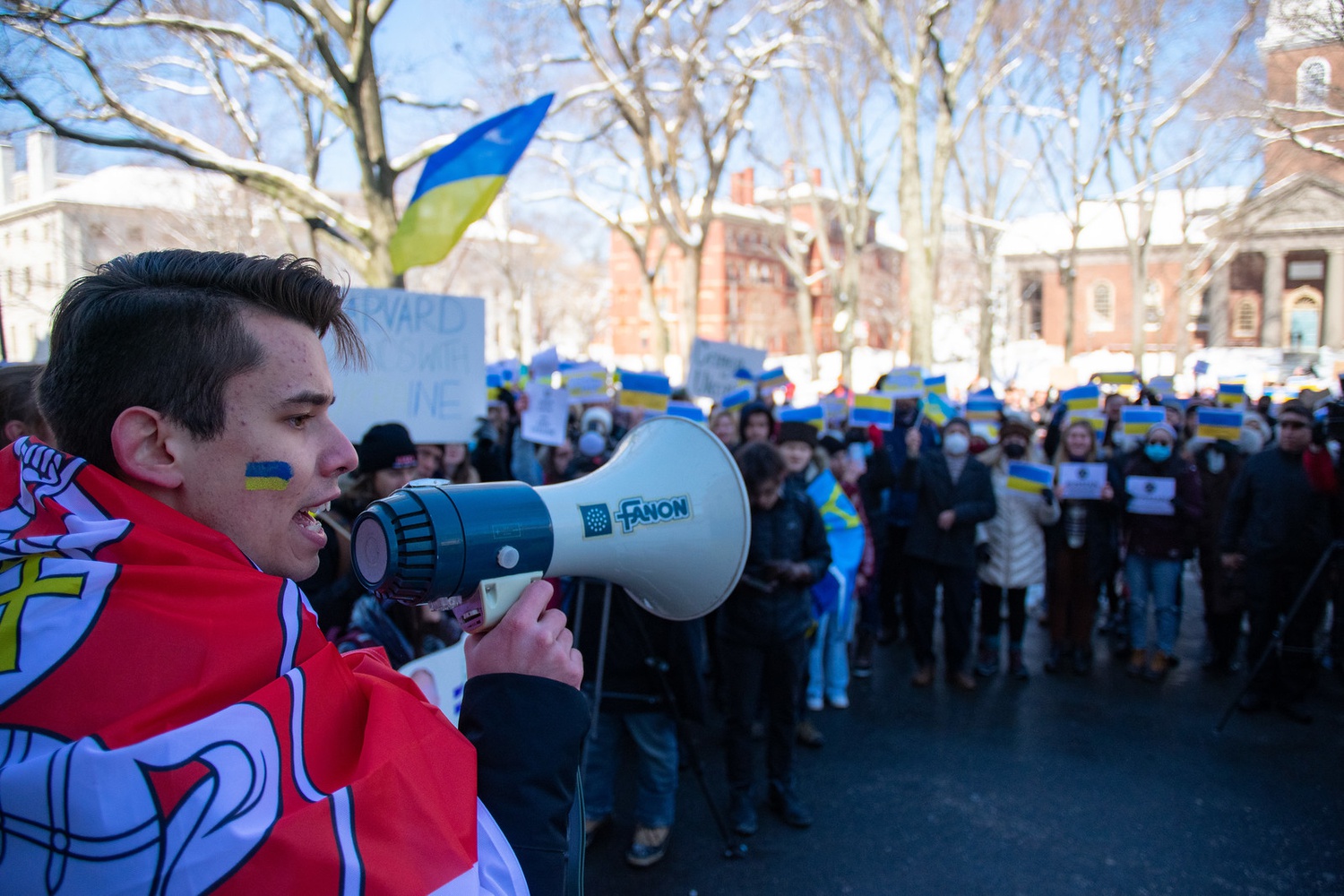 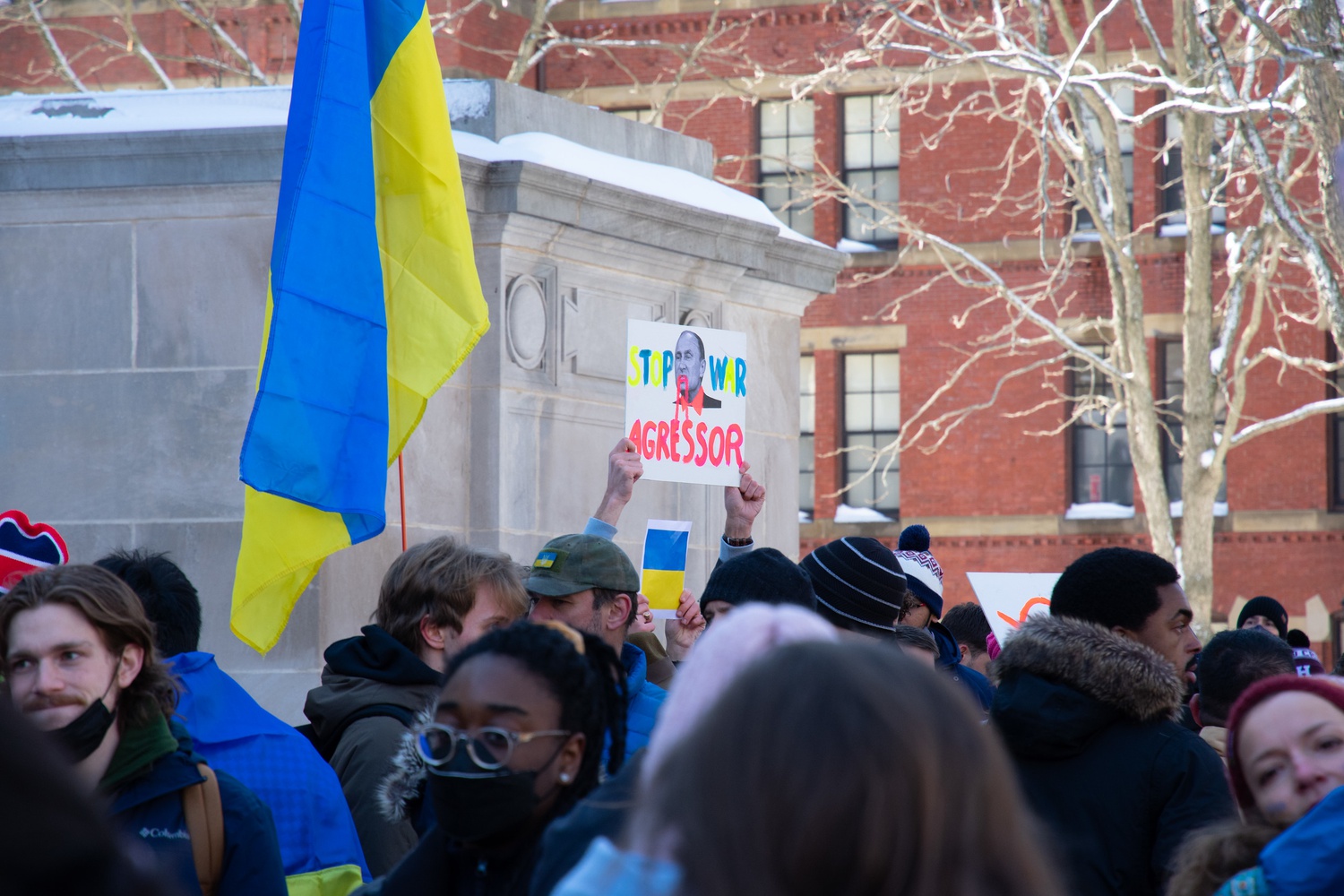 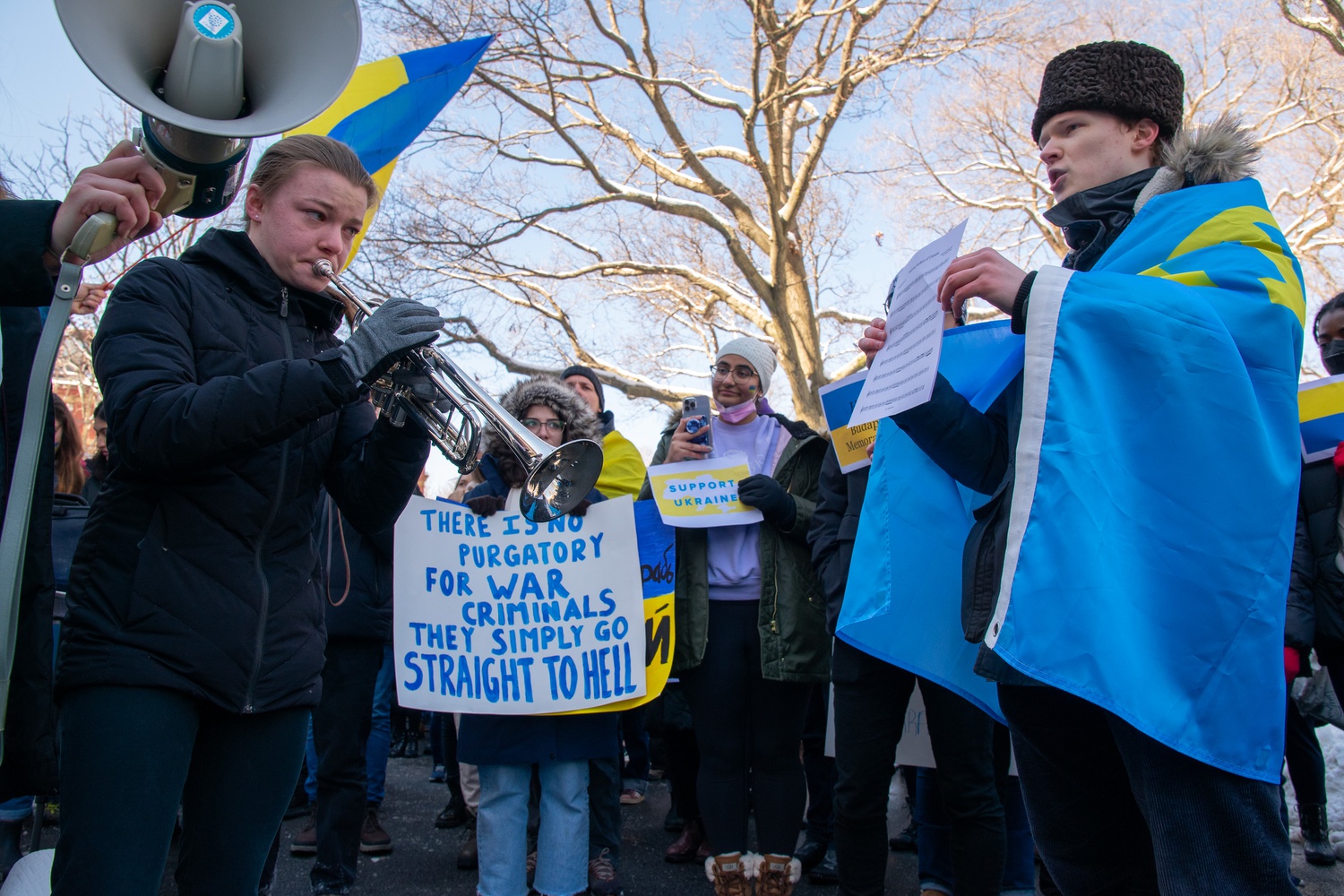 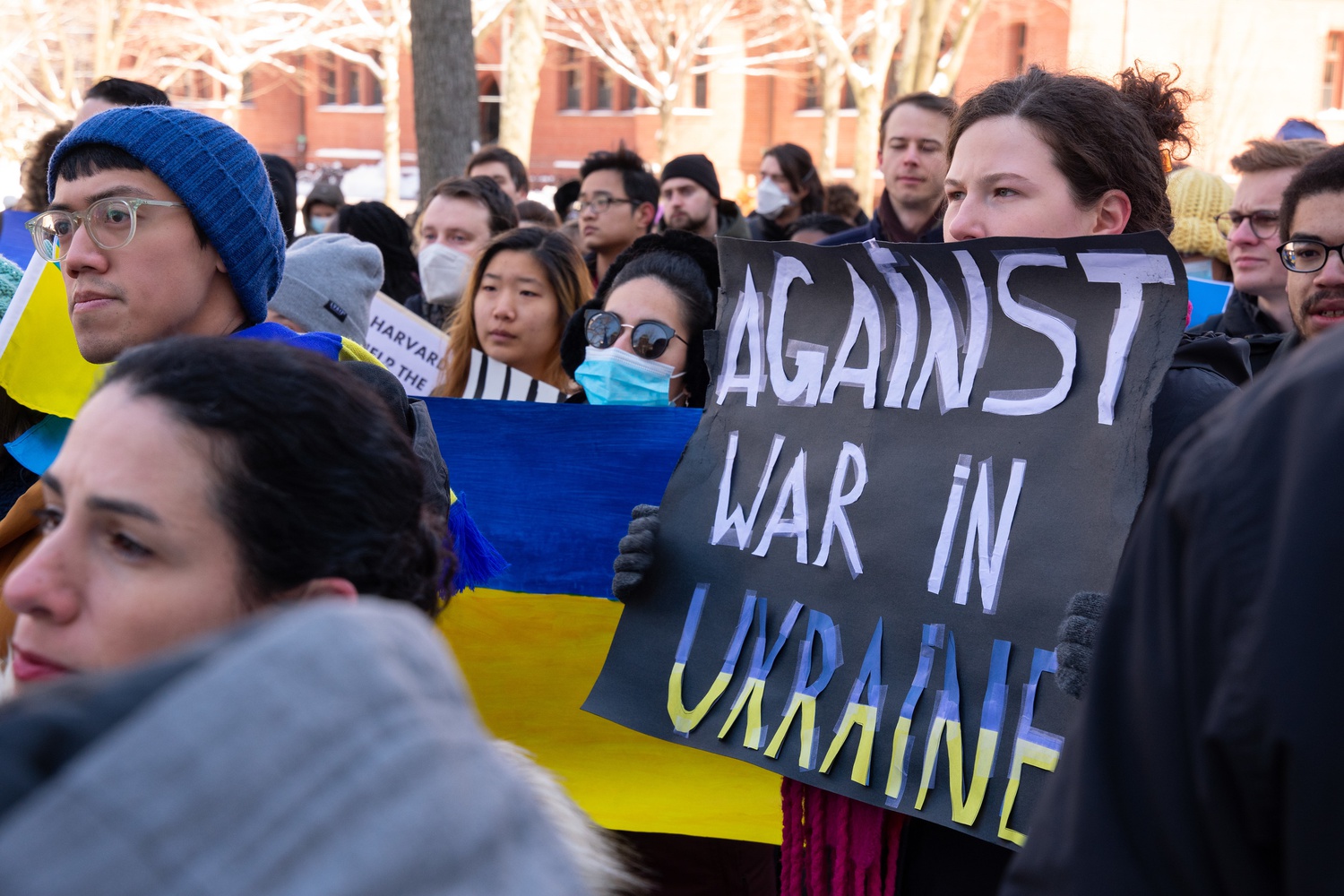 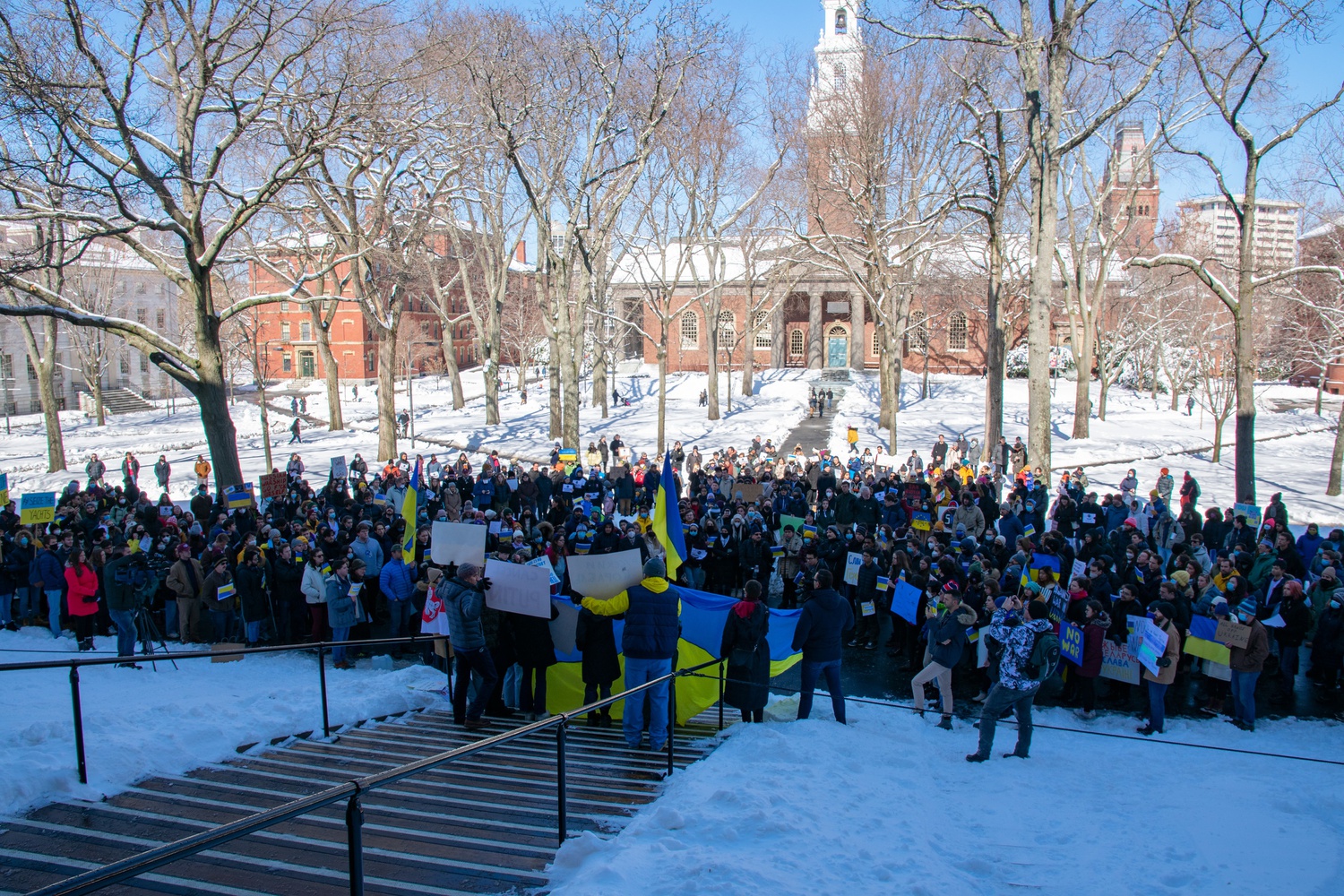 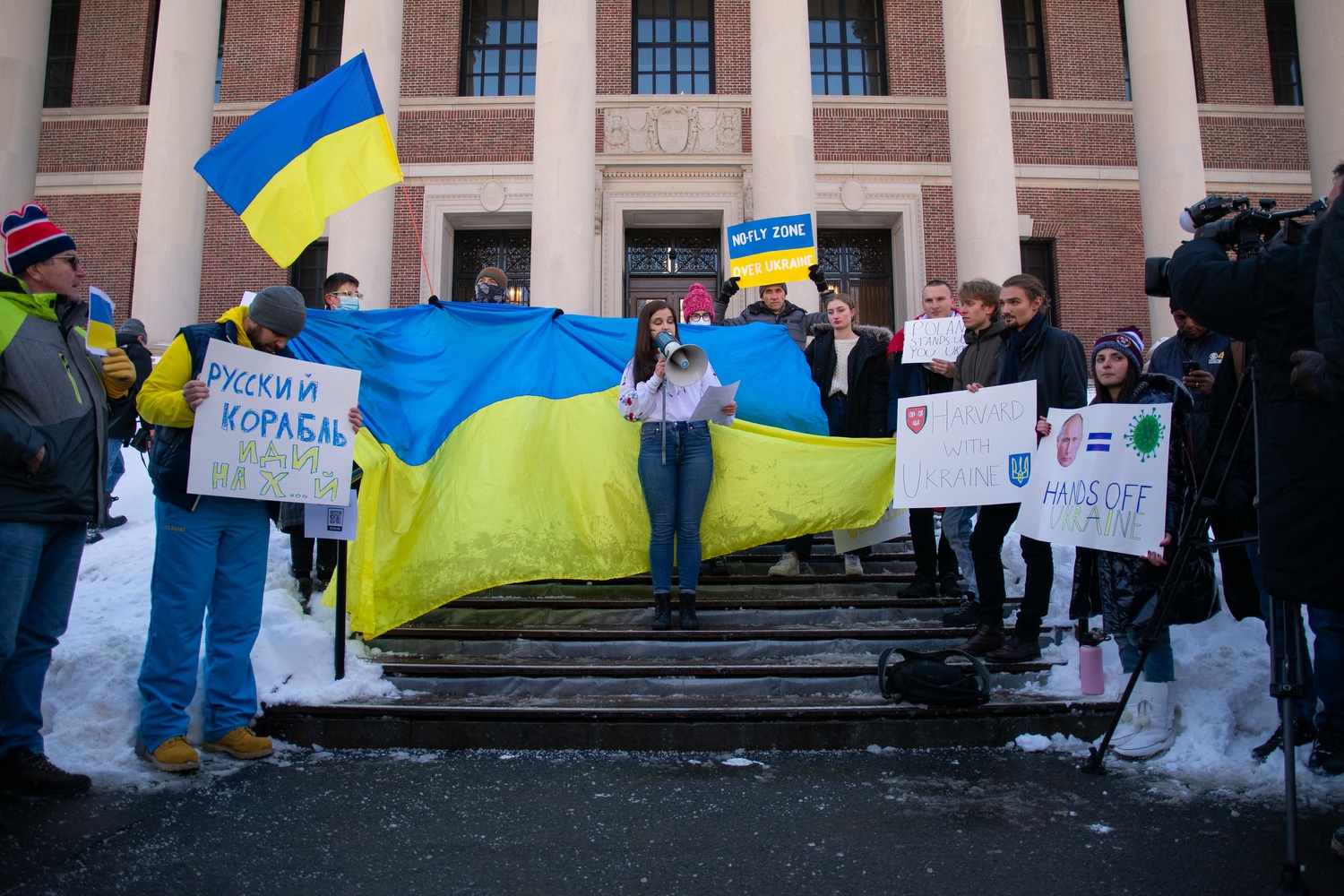 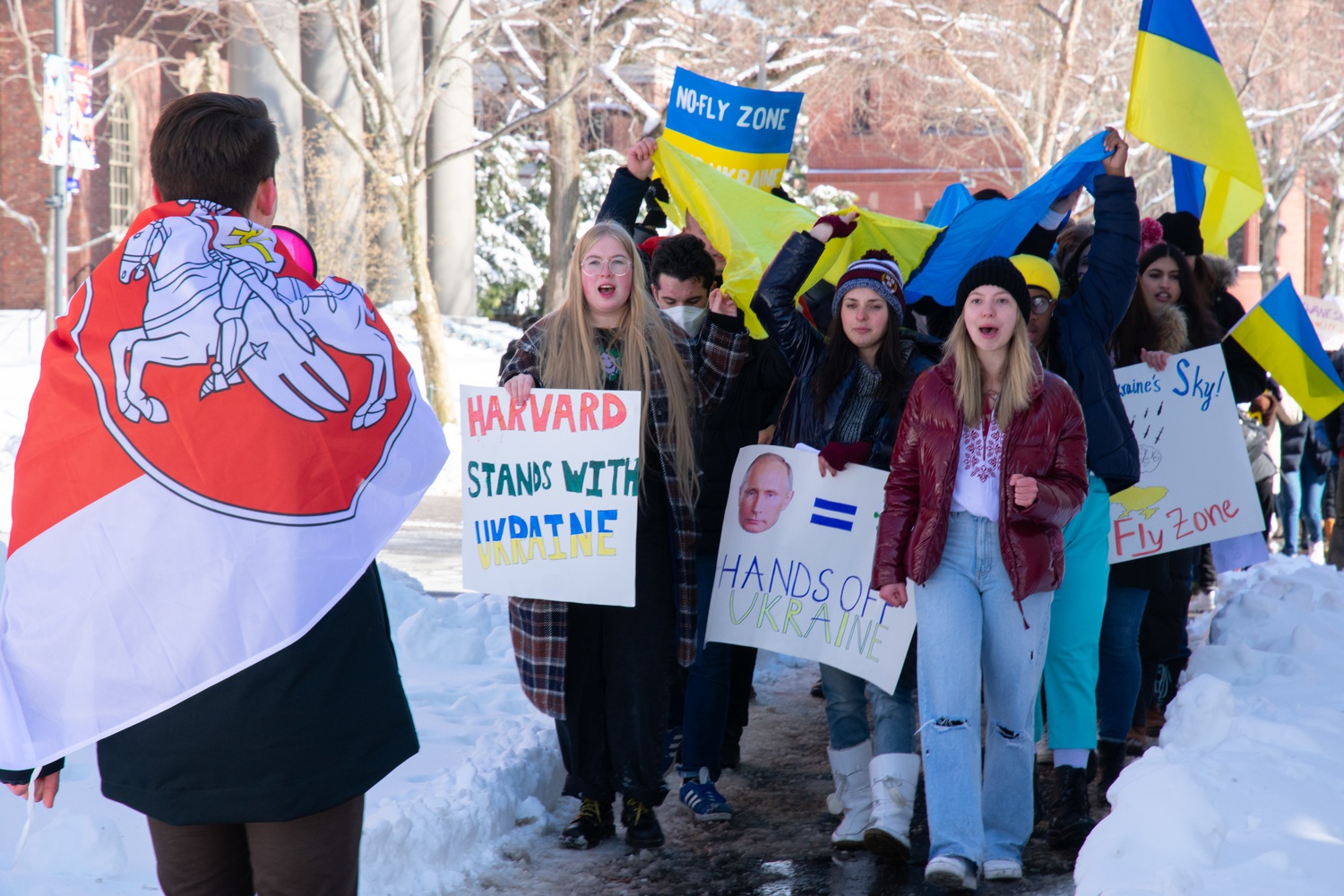 Alexander A. Nikolaenko, a Harvard Ph.D student who has family in Kharkiv, Ukraine, said he is struggling to focus on academics. Kharkiv, a city near the Russian border, has seen intense fighting since the start of the war.

“Honestly, I was not studying at all these two days because I cannot focus enough,” he said. “I constantly check [the] news and check with my friends to hear how they’re doing.”

Some demonstrators called on Harvard administrators to publicly denounce the invasion.

“We wanted for [the] University to support us, and we wanted them to write a huge message to the entire community,” said Yegor Tverdokhlibov ’25, a Ukrainian student.

During the rally, Emily Channell-Justice, director of the Harvard Ukrainian Research Institute’s Contemporary Ukraine Program, read a letter from University President Lawrence S. Bacow that was sent via email to the research institute’s leaders on Friday.

“I wanted to write to let you know that I am thinking about you—and your colleagues and students—as the capricious and senseless invasion of Ukraine continues,” Bacow wrote in the email, which was provided to The Crimson. “Knowing that members of our community are facing grave uncertainty so far from their family and friends is deeply unsettling.”

Bacow wrote that he is “ready to offer whatever support the University can provide.”

In a statement to The Crimson Sunday evening, Harvard College Dean Rakesh Khurana wrote that the “recent invasion of Ukraine threatens life and liberty.”

“The effects of these egregious attacks have already had a profound impact on people worldwide, including members of our community,” he wrote. “I deplore this violence and the human cost of such aggression, and I stand in support of our community members at Harvard, Ukraine, and around the world.”

Michał Miąskiewicz ’04, a Ph.D student whose in-laws are from Ukraine, urged the University to disclose whether it has any financial ties to the Kremlin. 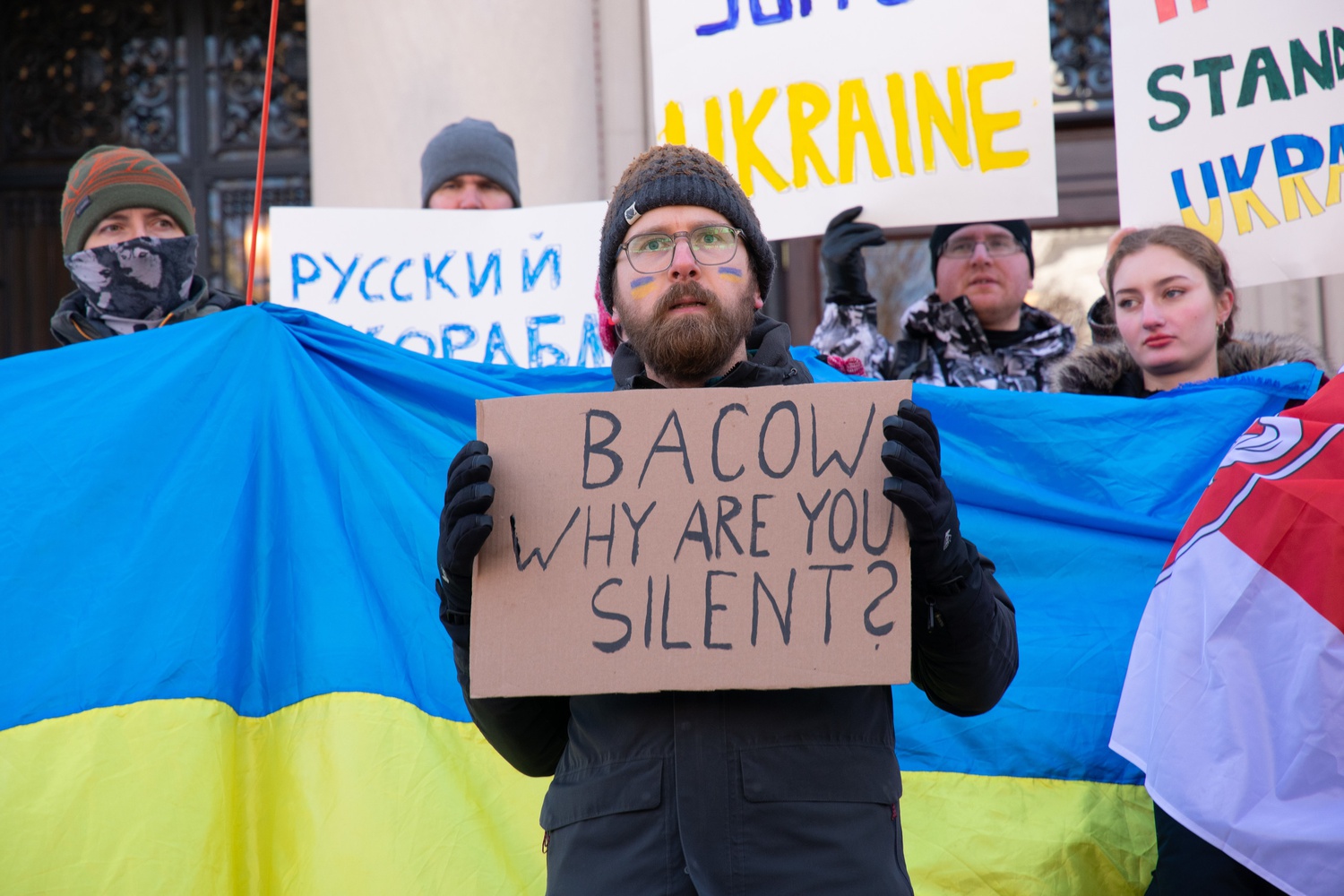 Michał Miąskiewicz '04, a Harvard Ph.D student, called on University President Lawrence S. Bacow to speak out in support of Ukraine at a rally held Saturday in Harvard Yard. By Julian J. Giordano

“I would like President Bacow to tell us: are there any investments that Harvard has with companies, or with any business that Harvard has with billionaires with personal ties to the Kremlin?” Miąskiewicz asked. “I’ll be very happy to hear that there are none or if there have been any, that they are just being canceled as we speak.”

Harvard spokesperson Jason A. Newton declined to comment on whether the school has financial ties to Russian companies.

Iryna Kovalchuk, a preceptor in the Polish language program, said her family has been deeply affected by the war.

“My parents are near Dnipro now and my sister fled Kyiv,” Kovalchuk said. “And now the fights are very close to her house, and she feels homeless now like lots of Ukrainians.”

Others, like Michelle Viise, the monograph editor at the Ukrainian Research Institute, came to the rally to call on European leaders to take concrete steps to prevent further Russian advances.

“While we’re sanctioning everything, it’s also important for us to remember that not just Ukraine’s war, but a lot of our wars now are coming about because of our dependence on oil and gas,” Viise said. “We need to keep pushing on the dependence of Europe on gas — on Russian gas. That’s the next step.”

“Gas doesn’t just fuel your car,” she added. “It fuels dictatorship, and it definitely fuels Putin.”