Aminé Concert Review: ‘Best Tour Ever’ In The House Of Blues 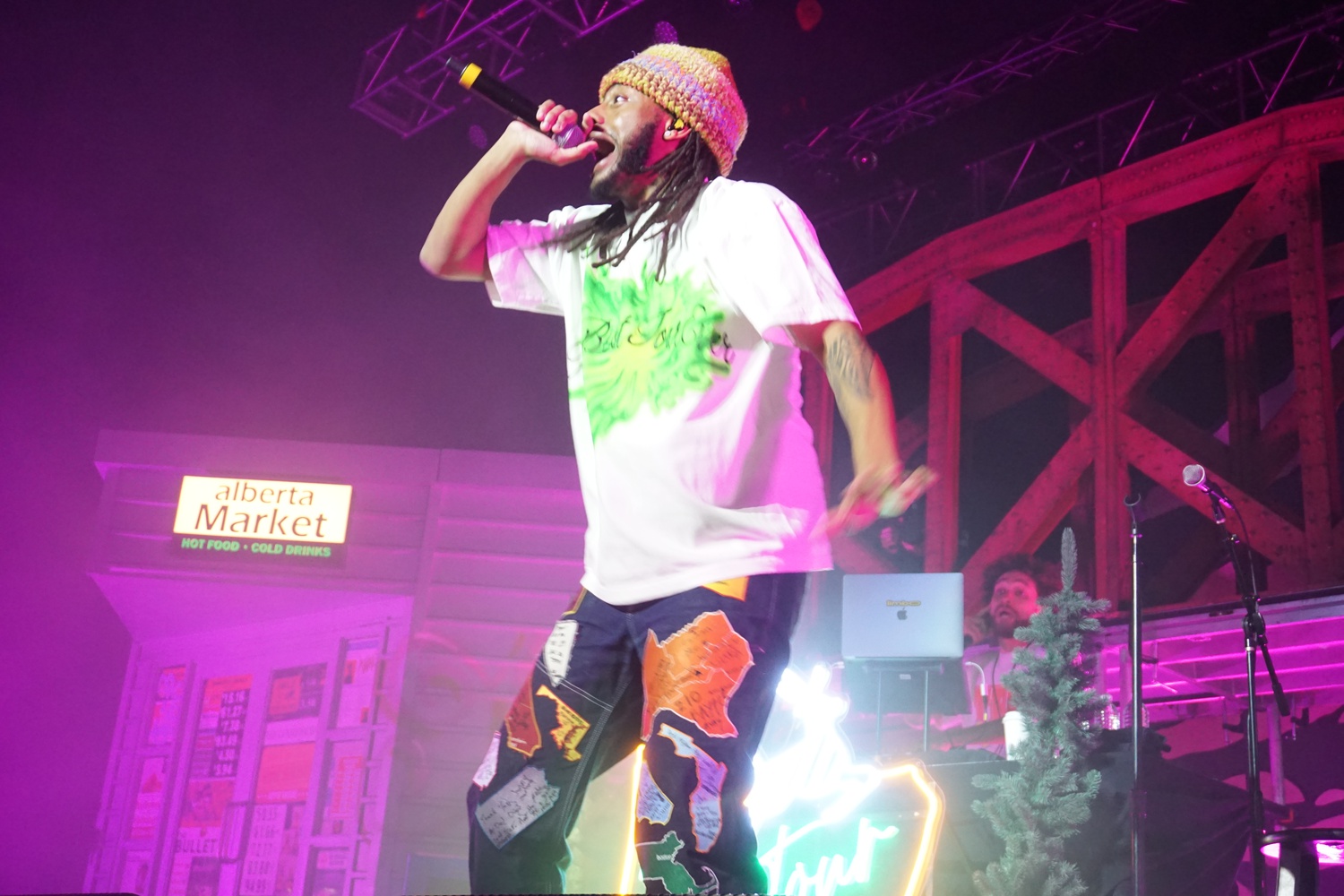 On March 4, Portland rapper Aminé dropped by the House of Blues as a pit stop on his “Best Tour Ever.” The tour promotes his latest album, “TwoPointFive,” that dropped last November as a sequel to his sophomore album “OnePointFive.” Donning his signature colorful beanie and graphic t-shirt, Aminé’s sunny personality radiated on stage as he vibed with the Boston crowd.

The stage featured a backdrop of various mementos dear to the rapper: the lifesize corner store Alberta’s Market, Rose Garden, a larger-than-life statue of Ollie (Aminé’s dog), the silhouette of Portland’s Broadway Bridge, and his signature Woodland Park sign featured in previous music videos like “Shimmy.” With this miniature town at his back, Aminé’s “Best Tour Ever” started off with the bangers “Mad Funny Freestyle” and “meant2b.” These upbeat bops had the crowd grooving side to side, the thrumming bass keeping tempo for Aminé’s own funky dance moves. Snippets of Spice Girls’ “Wannabe” sounded after “Spice Girls,” and Snoop Dogg’s “Drop It Like It’s Hot” after “REDMERCEDES,” highlighting the charismatic quality of Aminé’s performance. 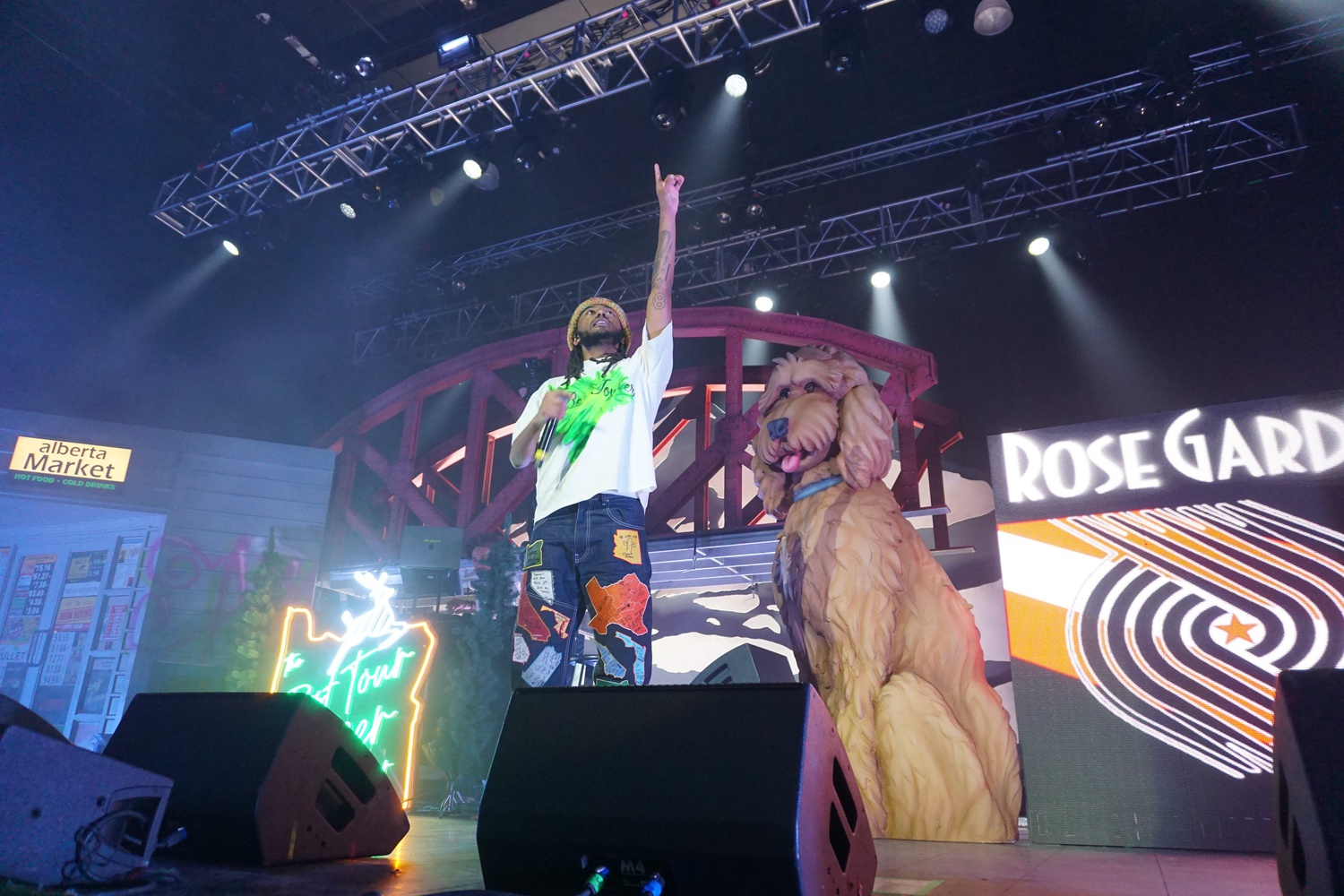 Aminé with his stage design behind him. By Courtesy of Alisa Regassa

Songs like “Shimmy” and “Ratchet Saturn Girl” had the crowd going wild, mosh pits and chants spurring on the audience while fueling Aminé’s performance. His stage presence multiplied when he belted out lyrics like “I got verses on verses, man, this shit could go all day.” However, the addition of mellow R&B jams like “OKWME” and “Compensating” balanced out the energy, preventing the show from getting over-hyped. He took time during these tender interludes to share some candid stories with his eager fans. Like the detailed narrative of his tour pants: how he wears them as his lucky charm for every show, adding in patches that represent each city along the tour. At this time — and throughout much of the concert — fans in the crowd could be heard screaming how attractive they thought Aminé was. In a call-and-response fashion, Aminé would send a cheeky smile and sing “And if you ain’t got a man, fuck with me boo.” This reciprocal love was evident in songs like “Cantu,” where Aminé stripped back the acoustics to sing the lyrics “Cause I might wanna let my hair down” acapella for his Bostonian fans. 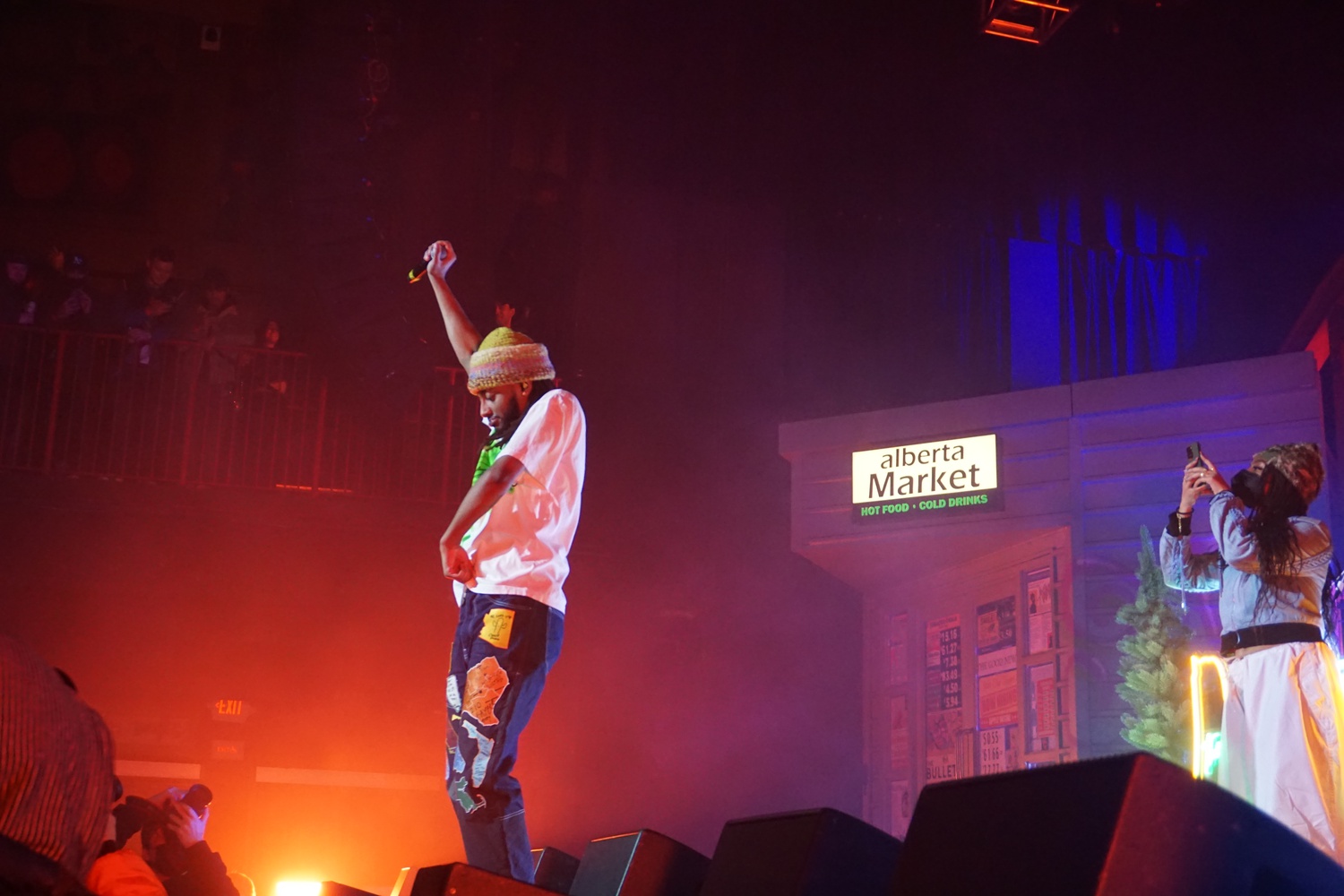 Aminé dances on stage. By Courtesy of Alisa Regassa

These pivotal moments not only enriched the crowd interaction, but made for a more intimate and authentic performance.

The setlist was an amalgamation of chart-toppers and high-energy bops from Aminé’s entire discography — but the key moments in the concert were the lowkey vibes. The transition from an a capella rendition of “Caroline” to the energetic bars in “Reel It in” was smooth and natural, mimicking the parallel flows of the two albums in succession. Aminé slowed it down on the verse where his debut album “Good for You’”s “Caroline” was meant to be quick-paced, only to then speed it back up to the chorus of “Reel It In” from 2018’s “OnePointFive.” This stylistic finesse not only showed off the impressive narrative in Aminé’s discography, but also served to wind up the audience and to end the night on a high. 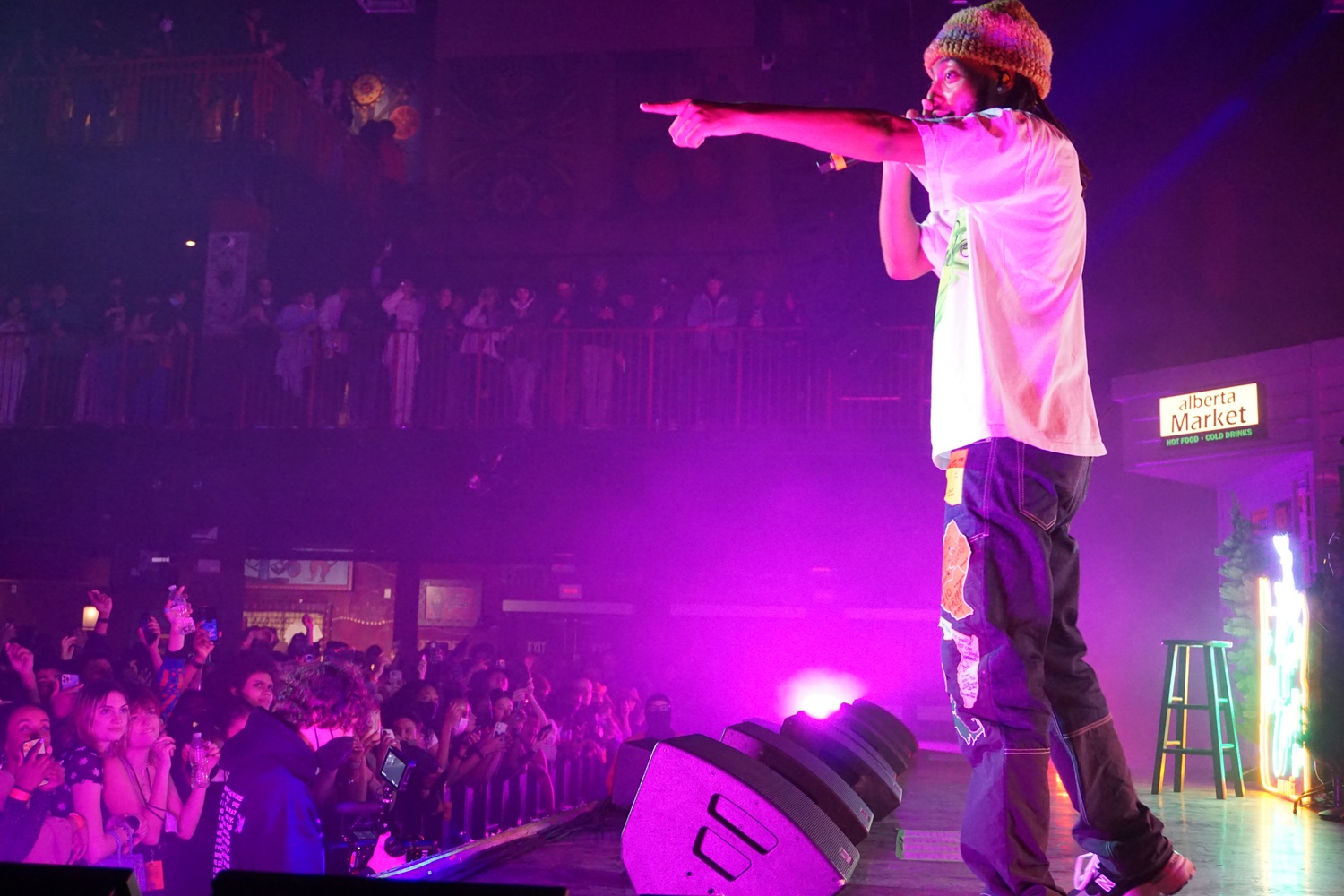 Aminé vibes on stage with his fans. By Courtesy of Alisa Regassa 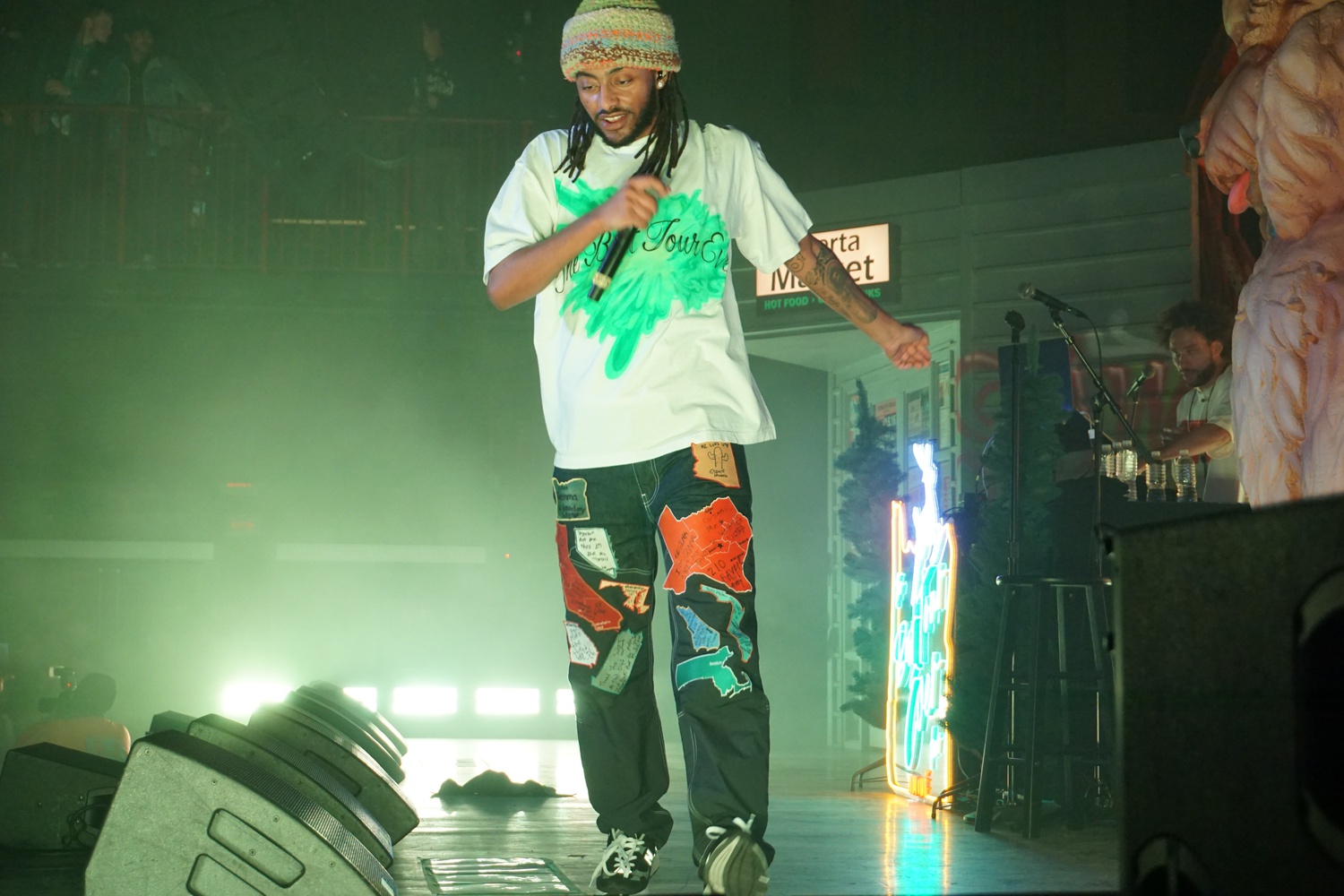 Aminé performs in Boston at the House of Blues. By Courtesy of Alisa Regassa