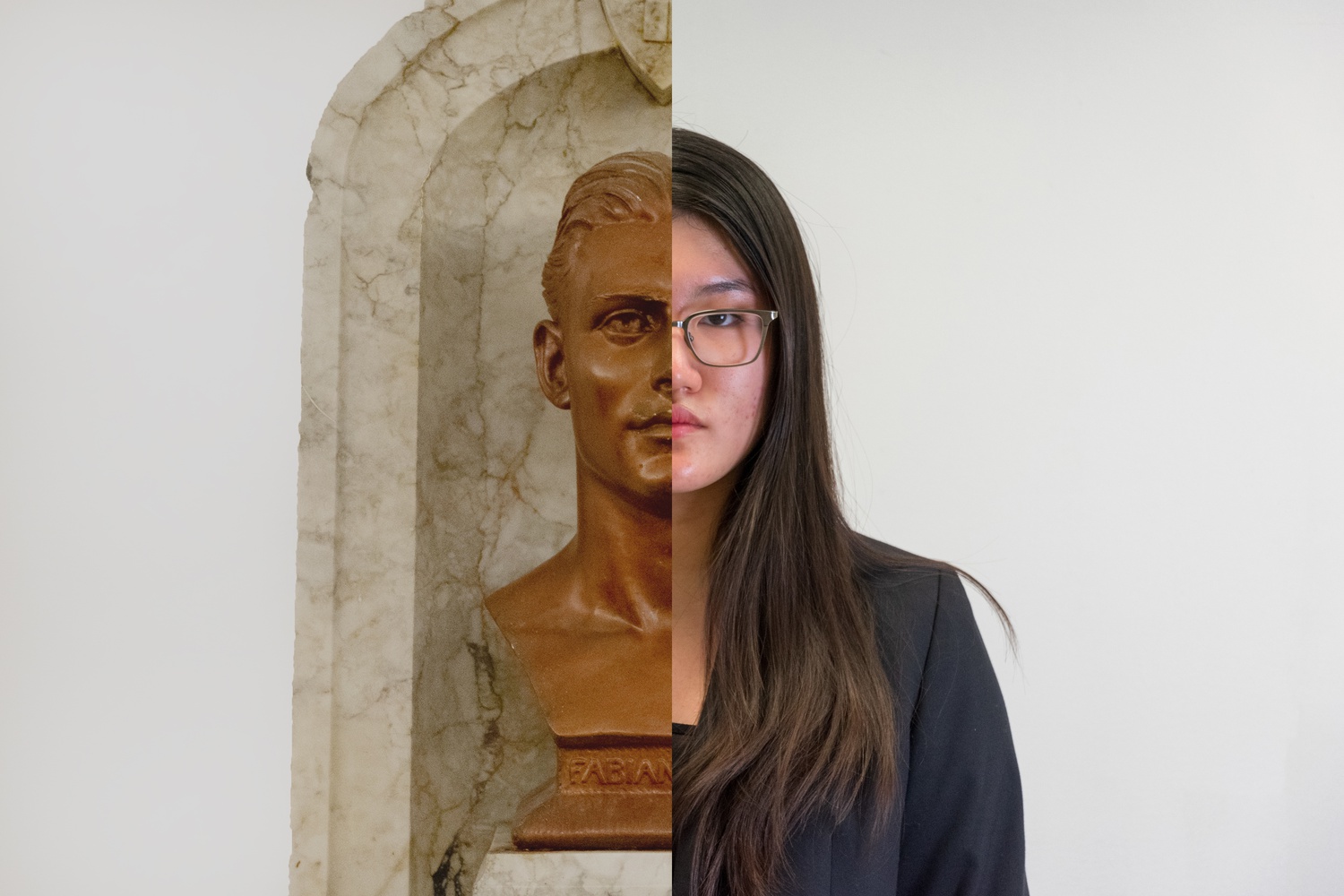 Fabian Fall, former president of The Harvard Crimson whose bust is displayed in the newspaper's building, alongside Meimei Xu, a current Crimson editor. By Julian J. Giordano
Advertisement
Advertisement

The Patron Saint of The Harvard Crimson

Fabian Fall’s bronze bust overlooks the Sanctum, the large, wood-paneled room on the second floor of The Crimson. It’s the only such figure in the room. The plaque underneath makes no mention of the fact that he took his own life.
By Meimei Xu

At just 15, he was accepted into both Oxford and Harvard. He entered and graduated from Oxford in two and half years, making him the youngest graduate from the program in over two decades. In 1906, he began studying at Harvard and finished his degree requirements in a year. He became an editor at The Crimson as a sophomore, then Managing Editor as a junior, the same year he started studying at the Law School. He was elected President in the spring of 1909.

That summer, Fall joined a military exercise known as the Red and Blue War of 1909, meant to test soldiers through a simulation of wartime conditions. On August 17, Fall sent an urgent message to his cousin to come to the South Armory in Boston.

Moments later, he killed himself.

He was a teen prodigy. He had everything going for him.

While there’s no definitive explanation for Fall’s death, his own ambition almost surely played a role. A New York Times article published the day after attributes his suicide to “overstudy.” His obituary in The Crimson attributes it to the effects of “undue exertion and exposure to the sun” in training camp on a mind and body “already overtaxed with the year’s work.”

Today, Fall’s bronze bust overlooks the Sanctum, the large, wood-paneled room on the second floor of The Crimson. It’s the only such figure in the room. The plaque underneath makes no mention of the fact that he took his own life. Each time I see it, I can’t help but wonder why we choose to memorialize him and him alone. What, exactly, are we placing on a pedestal?

I only learned about Fall’s story two years after joining The Crimson, when I happened to Google the name on the little plaque. But the more I learned, the more I saw some part of him in myself, as I attempt to find my place at this paper over a century later. 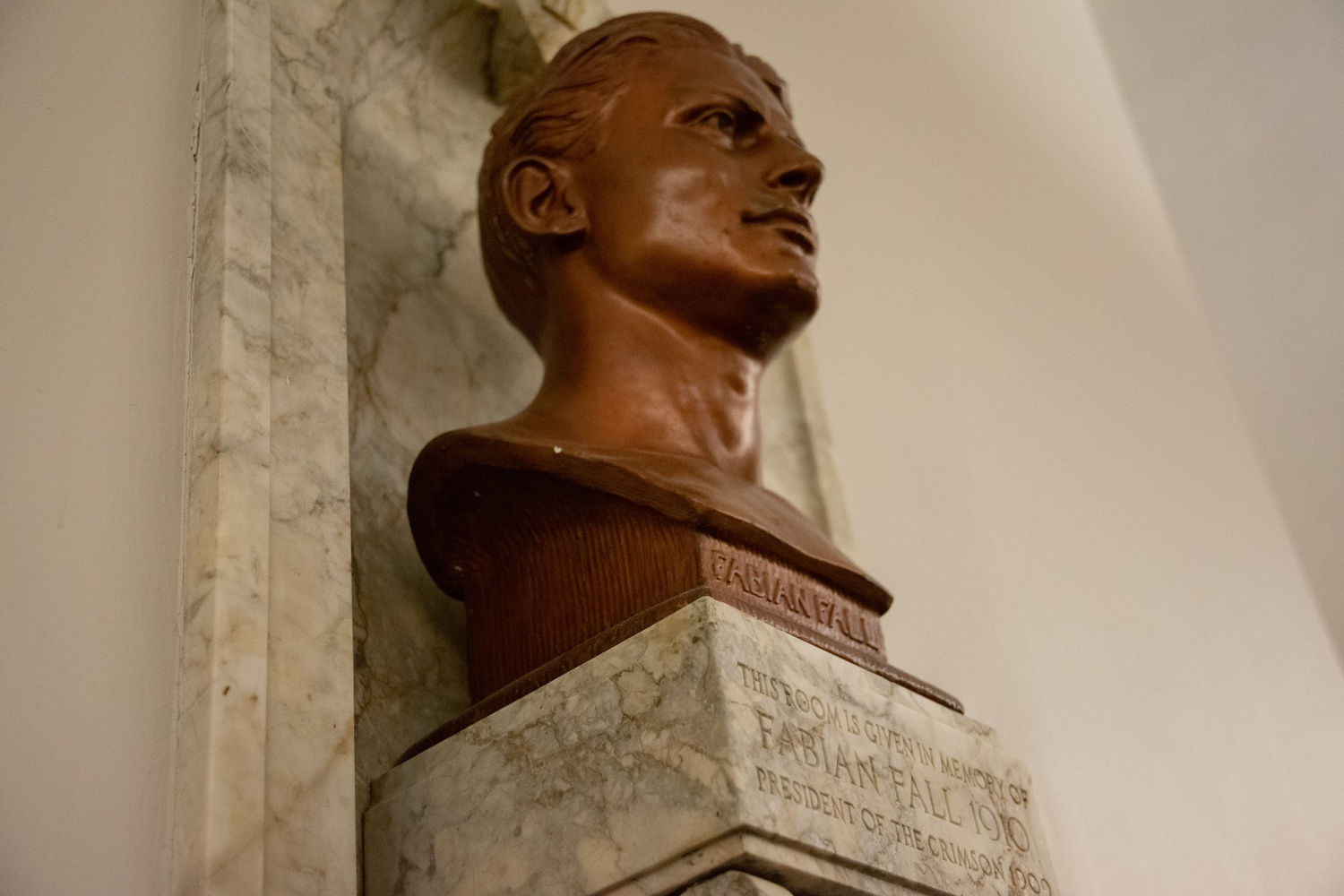 Fabian Fall, a former President of the Harvard Crimson, died by suicide in 1909. His memorial bust stands in the Sanctum of the Crimson's headquarters. By Julian J. Giordano

On nights that I have Crimson duties, I enter the newsroom after 8 p.m., chattering and laughing with my fellow writers as we sit down to edit our pieces. The air is lively, the banter is flowing, and people leave one by one with a finished story.

Then, 11:30 p.m. hits. The last writers shuffle out, unless there’s a piece that takes long into the night to edit — which happens at least once or twice a week. If I’m scheduled to flow articles into the daily print layout, I’ll see the newsroom gradually turn silent. The proof readers have their heads buried in articles. If it’s a good day, the laughter will continue into the night. If not, someone half-heartedly tries to play music, but after two Phoebe Bridgers songs, it dies. We keep working in silence until we close out at 2, 3, 4 a.m.

In a typical week, I have hours of interviews and meetings, comp seminars to plan and teach, other people’s pieces to edit, and my own articles that require hours of sourcing, planning, and writing and sometimes days of editing. I’m replying to emails in class, if not skipping lectures altogether, just to get whatever sleep I can.

Earlier this semester, the news broke that nearly 40 faculty signed a letter questioning Harvard’s investigation into professor John L. Comaroff’s alleged sexual harassment and misconduct. At the time, I was writing a 2,000-word story on dining labor shortages and had several other papers due for my classes. Even with two Crimson co-writers to help, I was unable to sustain the pace — the only sleep I got was by accident.

I didn’t know who to turn to. My editors sat me down and offered their help, but I knew I couldn’t take it. If I felt this way, they were surely dealing with worse. If I stayed up late, I knew they were staying up later. Everyone wants to be there for each other, but none of us truly can be.

In the middle of one of the worst nights of my life, I talked to a friend in my dark, lamp-lit dorm. I didn’t know if it was ever going to get better, I told him. I had already set my heart on this career, and I couldn’t see a way out. I had to be incredible, or I would be nothing at all.

He turned his face away from mine. He didn’t want to see this happen, he said. He just wanted to see me happy. He asked me how he could help. I told him there was simply no way he could.

In the year and a half we had known each other, it was the first time I saw him cry.

Most — if not all — of this stress is self-inflicted.

I don’t like admitting it, but I know why I and so many others do this.

The Crimson’s masthead is a pipeline for major news outlets and magazines. Its highly secretive, exhausting, and erratic selection process for leadership roles — the Turkey Shoot — has loomed over my head for three consecutive semesters, even though it only lasts one month each fall. It involves two rounds of interviews with members of the outgoing masthead, deliberators who were friends and confidants just days before. What happens during the final interview is confidential, but victors and losers alike have told me they emerged disillusioned with the institution to which they’ve dedicated their entire college careers.

For better or for worse, I can’t imagine myself doing anything else — learning from different perspectives, uncovering the hidden story, and, hopefully, instilling in others the passion for this work. I love writing, and I love editing, and I love teaching, and I love journalism.

So tell me, what kind of love pushes me to sign up for that extra article when my eyes are already burning while writing this one? What kind of love convinces me to take on another leadership role, knowing it will subtract ten more hours each week from my overdrawn schedule? What is it that I love, when I’ve seen what this place has done — to Fabian Fall, to my editors, to my friends — and still return to it, night after night?