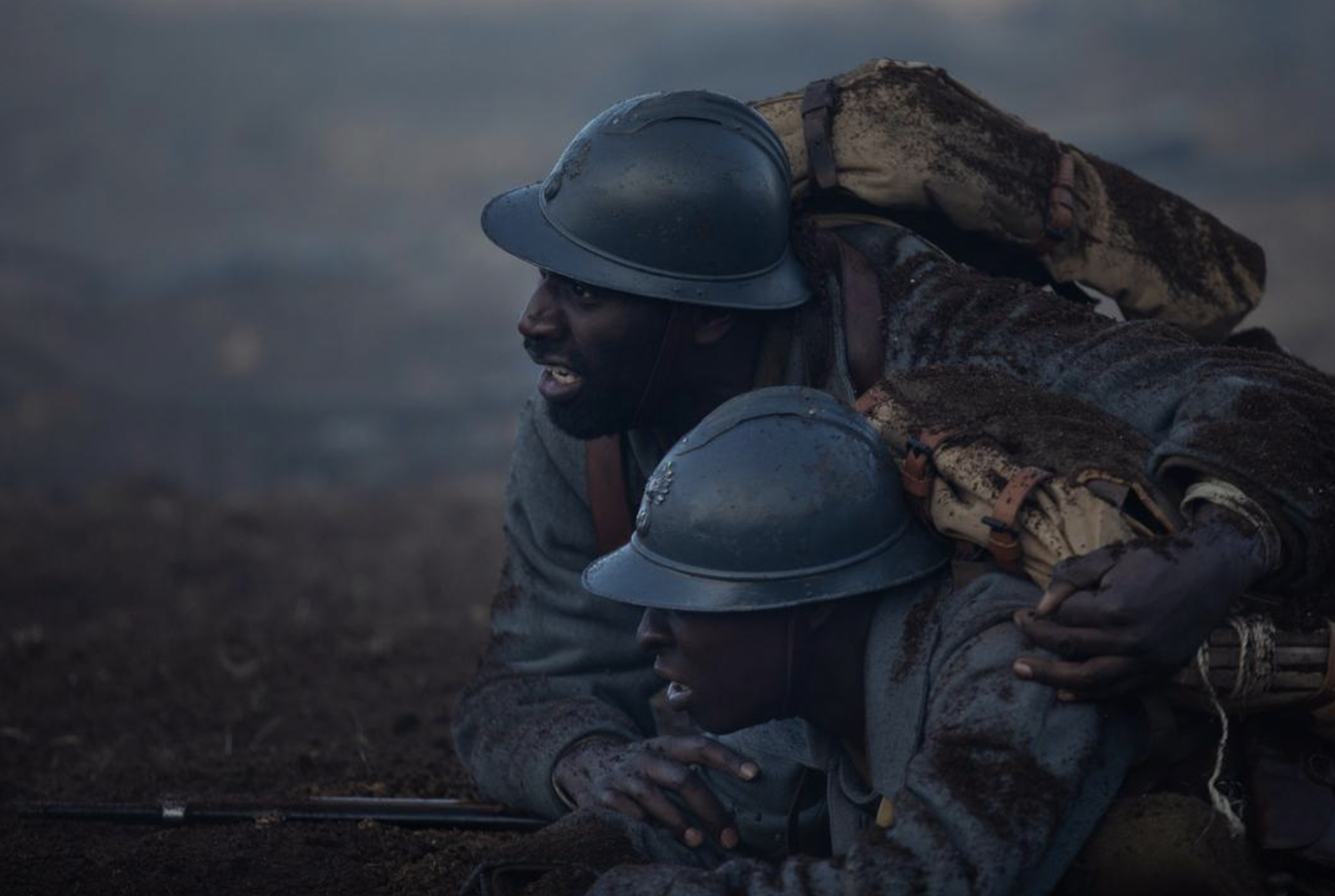 Mathieu Vadepied's latest film premiered at the 2022 Cannes Film Festival on May 19. By Courtesy of Unité and Korokoro
By Harper R. Oreck, Crimson Staff Writer

Mathieu Vadepied’s new film “Tirailleurs” (“Father and Soldier”), which premiered on May 19 at the 2022 Cannes Film Festival, takes a bracing look at the forced conscription and exploitation of soldiers from colonial Africa in World War I, a horrific aspect of the war that has often gone unseen in popular war cinema. As it weaves together two central plotlines — a Senegalese conscript’s efforts to escape the bloody front with his son and return to their village, and their French commander’s brash efforts to take back a German-controlled hill — the film imbues a fresh skepticism into the war-thriller genre, challenging the glorification of wartime sacrifice. Though the film sometimes seems to succumb to the exploitative pretense it aims to challenge — that the urgency of the war required colonial subjects to put aside their objections to French rule and help — as a complete work it is an important addition to the canon of World War I cinema, shedding light on the abuse and devastation inflicted on colonized African nations in the name of the European war effort.

The film follows Bakary Diallo (Omar Sy, in a heart-wrenching performance), a Senegalese herdsman who volunteers to join France’s auxiliary unit of African soldiers — known as “tirailleurs” — after French authorities raid his village and abduct his son Thierno (Allisane Diong) as a conscript. What unfolds is a sprawling epic that covers their journey across Europe and through the war, tracing their diverging attitudes toward the conflict. Bakary’s resolve to get his son out of the war deepens even as their surroundings descend into a living nightmare, while Thierno falls in with a young, grandiose French Lieutenant Chambreau (Jonas Bloquet) and becomes increasingly convinced of the importance of their fight on the front as he resigns himself to life in the army. Through their stories, Vadepied tracks two distinct perspectives on the war, one driven by family allegiance and the other by military duty.

The latter of these motivations, as embodied by Theirno, feels familiar as the standard narrative outlook of most war movies. Thierno’s arc focuses on his growing investment in the fight against the Central Powers, which is where he believes he can have an impact, unite with his brethren in the military, and assist the war cause. His beliefs mirror the attitude and environment of tormented heroism that tends to suffuse military thrillers. The extended fighting sequences on the front reflect those films in their suspense-building tactics, which highlight that the ultimate goal of every character is to achieve their military goals (and survive, if they can). Sy’s character, on the other hand, introduces a third perspective existing outside of military calculus. Instead of the abstract French preoccupation with protecting the motherland, he’s guided by his parental protectiveness over his son; Thierno’s safe return to Senegal is the only priority, and if he can save his son by deserting the front, he will.

Vadepied portrays both characters’ development in depth but focuses more on Sy’s perspective, unseating tragic military heroism from its valorized place at the top of the hierarchy of war-film motivations. Bakary’s goal comes across as far more immediate, important, and intuitive than the military triumph Chambreau and later Thierno are willing to risk everything for, and his appears as the only viewpoint — compared to the Allied and Central authorities — unaffected by delusions of military victory and actually concerned with the lives and survival of the tirailleurs.

As Thierno is drawn further into the French military effort and places himself in greater and greater danger, his father’s increasingly frantic efforts to pull him back feel like the only option to save his life in the face of the war’s apathetic vortex of violence. Beyond the principled element, Sy and Diong’s performances and the in-depth emotional realism of their arc lend heart to the story and constantly reinforce its mortal stakes, delivering an engrossing and affecting viewing experience.

Through these techniques, Vadepied’s war film — which often feels like a standard war drama in other respects, such as its battle sequences and camp scenes — questions the moral legitimacy of the French army’s conscription tactics and questions why Senegalese soldiers are forced to give their lives in service of an empire that does not treat them as human. Vadepied makes a meaningful commentary about French abuse against colonial subjects in the name of the war effort, illustrating how the nationalistic ideals so often parrotted in war films are weaponized against marginalized people during wartime.

That being said, “Father and Soldier” certainly has its issues. Once Bakary and Thierno arrive in France, the French authorities are rarely shown and the film mainly shows Thierno’s blossoming friendship with Chambreau, who constantly reiterates that their differing ranks shouldn’t affect their friendship. The question of how their different racial and political statuses within the French empire informs their dynamic (Chambrea being the white son of a commander and Thierno being a Black abductee from a region colonized by France) is never thoughtfully broached. Though Bakary implicitly presents the idea that the conscripts are fighting for a power that will not recognize them or respect their freedoms, Vadepied doesn’t carry this idea through in the third act and never substantially delves into the institutional French attitude toward tirailleurs once they arrived in the theater of war.

History shows that tirailleurs were again conscripted and exploited in World War II, after which they were sidelined and deprived of equal pensions by the French military, yet this important piece of context — affirming Bakary’s argument — doesn’t feature in the film. When Vadepied cuts ahead from the end of WWI to the present day, where the film discusses the Tomb of the Unknown Soldier and its connection to the slain tirailleurs who were left where they fell, he skips this context. Accordingly, his portrayal of the French institutional attitude toward tirailleurs in Europe — in essence, what Bakary was up against — does not feel fully sketched out. At times, it feels unethical to mine the traumatic experience of the tirailleurs in the war for cinematic suspense, as in the fast-paced No Man’s Land sequences, without providing a full historical picture of their experience and their continual lack of recognition, effectively glossing over their treatment after the war.

Ultimately, “Father and Soldier” takes the shape of a classic war film. The film’s cinematic atmosphere is marked by immersive production design showing the war-wracked villages of France, a series of fast frontline action sequences, and the bombastic momentum of a battlefield movie. But there is value, in itself, in telling this classic war story with a focus on the tirailleurs and the unique dangers and prejudice they faced. Indeed, the cinematic record of the war is not complete unless it gives voice to their mistreatment, and Vadepied’s film is an important, if flawed, addition to the canon.