At Class Day, Michelle Wu ’07 Calls on College Graduates to Embrace ‘Veritas’ as Foundation of Changemaking 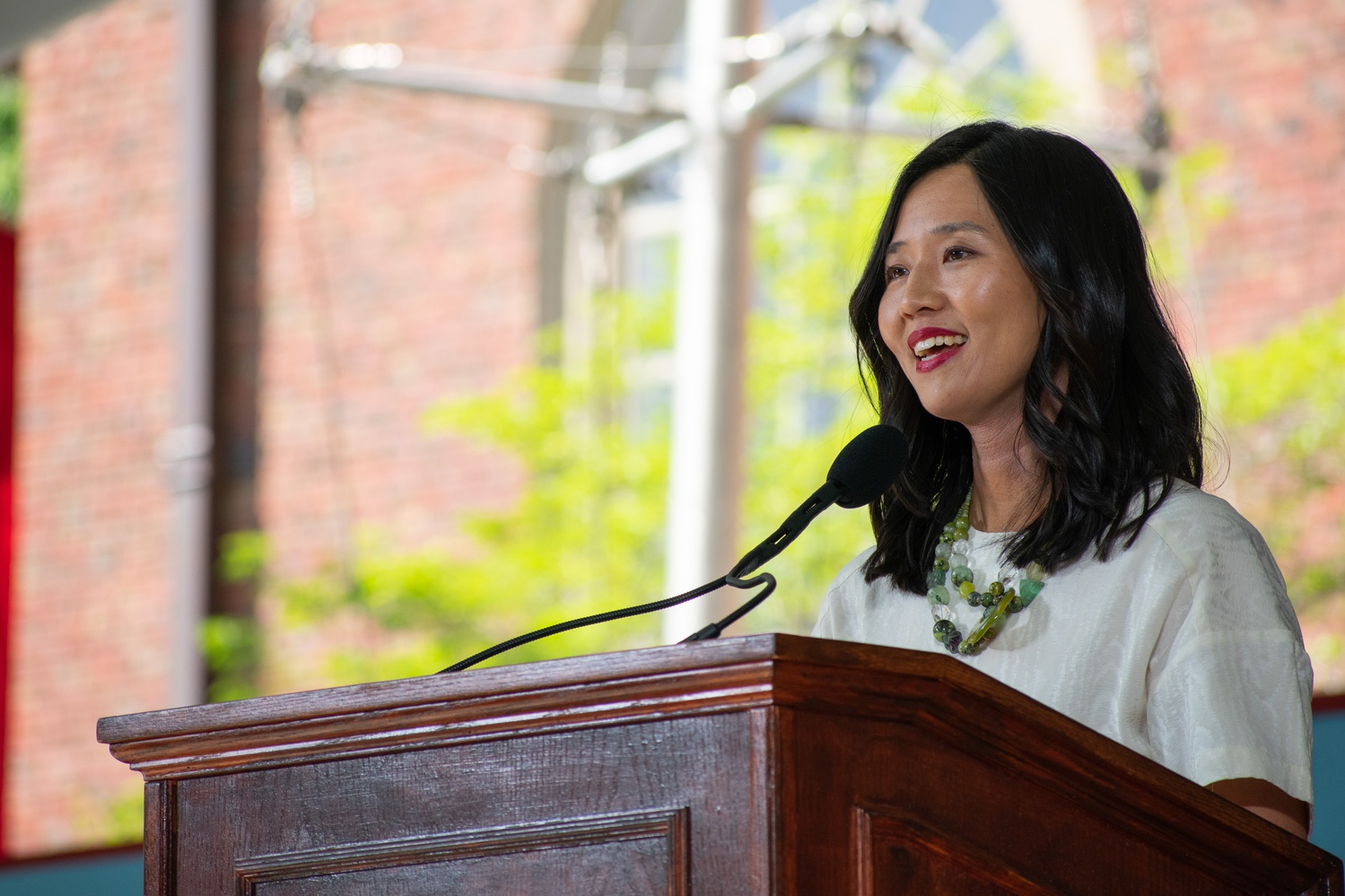 Boston Mayor Michelle Wu ’07 addressed the Harvard College Class of 2022 at the school’s Class Day ceremony on Wednesday, urging graduates to seek truth in themselves and others to drive change.

The College’s Class Day, which celebrates the accomplishments of graduating seniors, was held virtually for the past two years due to the Covid-19 pandemic. In March 2020, students were sent packing amid the escalating public health crisis, forcing the Class of 2022 to spend more than half their college years under pandemic restrictions.

An alumna of Harvard College and Harvard Law School, Wu is the first woman and person of color to be elected mayor of Boston. Wu studied Economics in Currier House during her undergraduate years.

In her speech, Wu reflected on the various ways the University’s motto — “Veritas” — has permeated her own life, encouraging students to “see what is truly real” by diving headfirst into the challenges they seek to address.

“If you’re trying to solve a problem in the world, understand what it feels like first,” Wu said. “Seek out those closest to the challenge, and those who will be most impacted by the solution. I take the T to work because my own deep truth is that I’m a transit nerd, but also because there is no better way to get expertise in transit policy than to experience the system you’re trying to improve day in and day out.”

In her campaign for mayor of Boston, Wu advocated for a Green New Deal for Boston, paid parental leave, and workers’ rights. At Class Day, Wu emphasized the importance of “speaking truth” in order to address the world’s pressing challenges, including climate change, gun violence, and reproductive rights.

“To tackle the challenges we face today, we need to build trust in the urgency of our challenges by seeking the truth of the experiences of those on the ground, speaking the truth when it’s hard, and building the community to solve it,” Wu said.

Amid “waves of misinformation and disbelief,” Wu said it was important to continue to elevate the truth.

“Tell the truth when it’s hard, and uncomfortable, and complex,” Wu said. “Tell it so that we can build and rebuild the trust that’s needed for our brightest future.”

Wu offered her congratulations and said she was “rooting” for the Class of 2022 as she concluded her address.

“You can do anything,” Wu said. “Choose to make what you do impactful, joyful, and true.”

Khurana painted a picture of a “hopeful version of 2036” — the year of the University’s 400th anniversary. 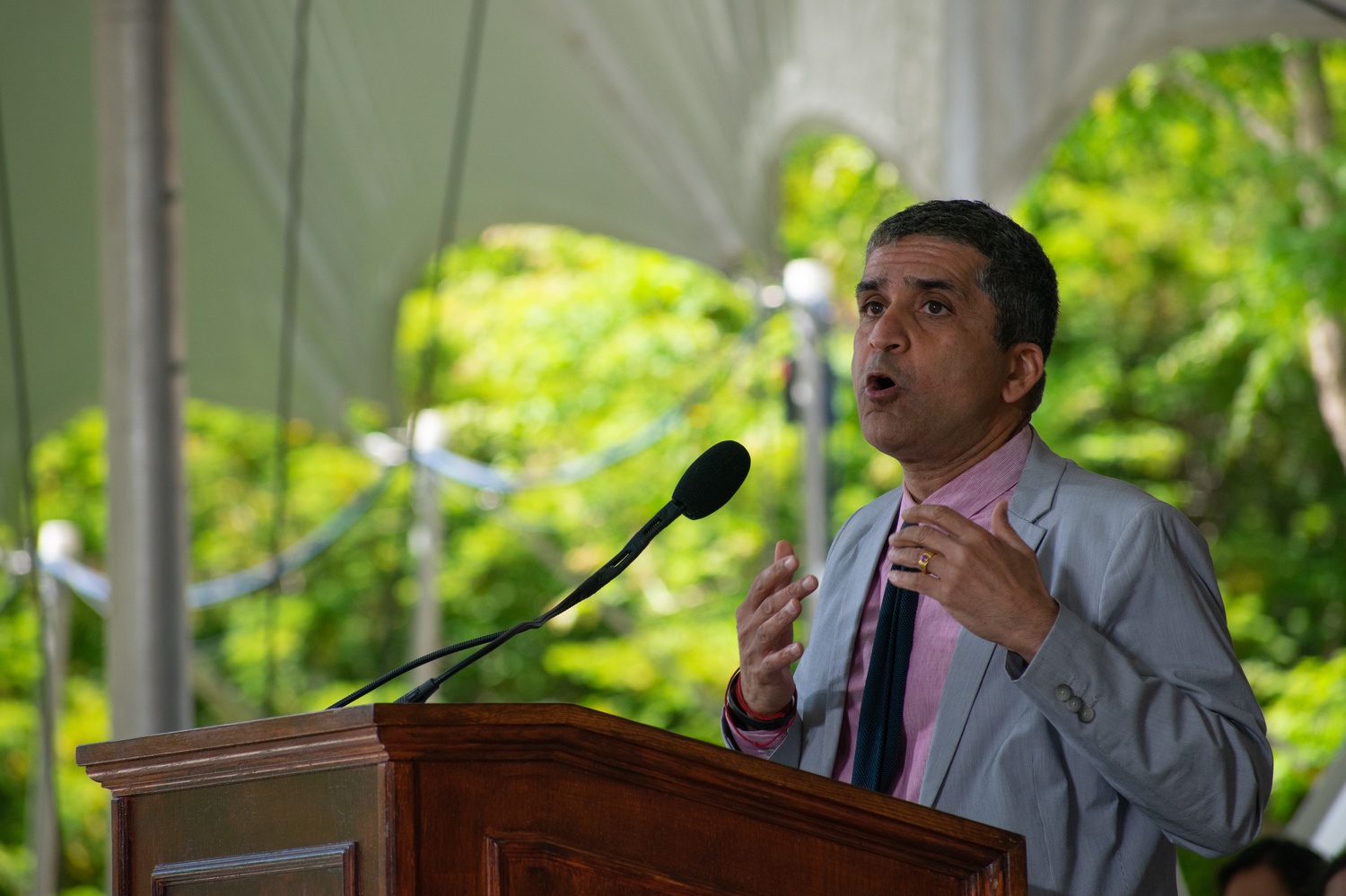 “In this 2036, climate change is under control, solar and wind converted into electricity have become the backbone of our energy systems, nuclear war is no longer a looming threat,” he said. “Sometime around 2022, we recognized that humanity’s diversity is its strength, and a source of infinite possibility. We realized that the world’s most important resource is its youth.”

“Right now, this vision of 2036 sounds not just unrealistic, but maybe naive and unattainable,” Khurana added. “I don’t know how we’ll get from here to 2036. But I do know that social change begins with bridge-builders. And I know that you all are ready to step into that role.”

Youmna M. Chamieh ’21-’22 delivered the Ivy Oration, quipping about the Harvard experience and likening the school to a “long-term girlfriend.”

“In the courtship stages, back when nothing was guaranteed, we told Harvard that we ‘loved the way it thinks’ and that it was ‘not like other schools,’” Chamieh said. “And now we’re four years in, and we’re like, ‘You put the toilet seat back up.’”

“Except the toilet seat is just divesting from fossil fuels,” she added.

Following years of advocacy efforts from campus groups, the University announced last September that it would allow its remaining investments in the fossil fuel industry to expire. 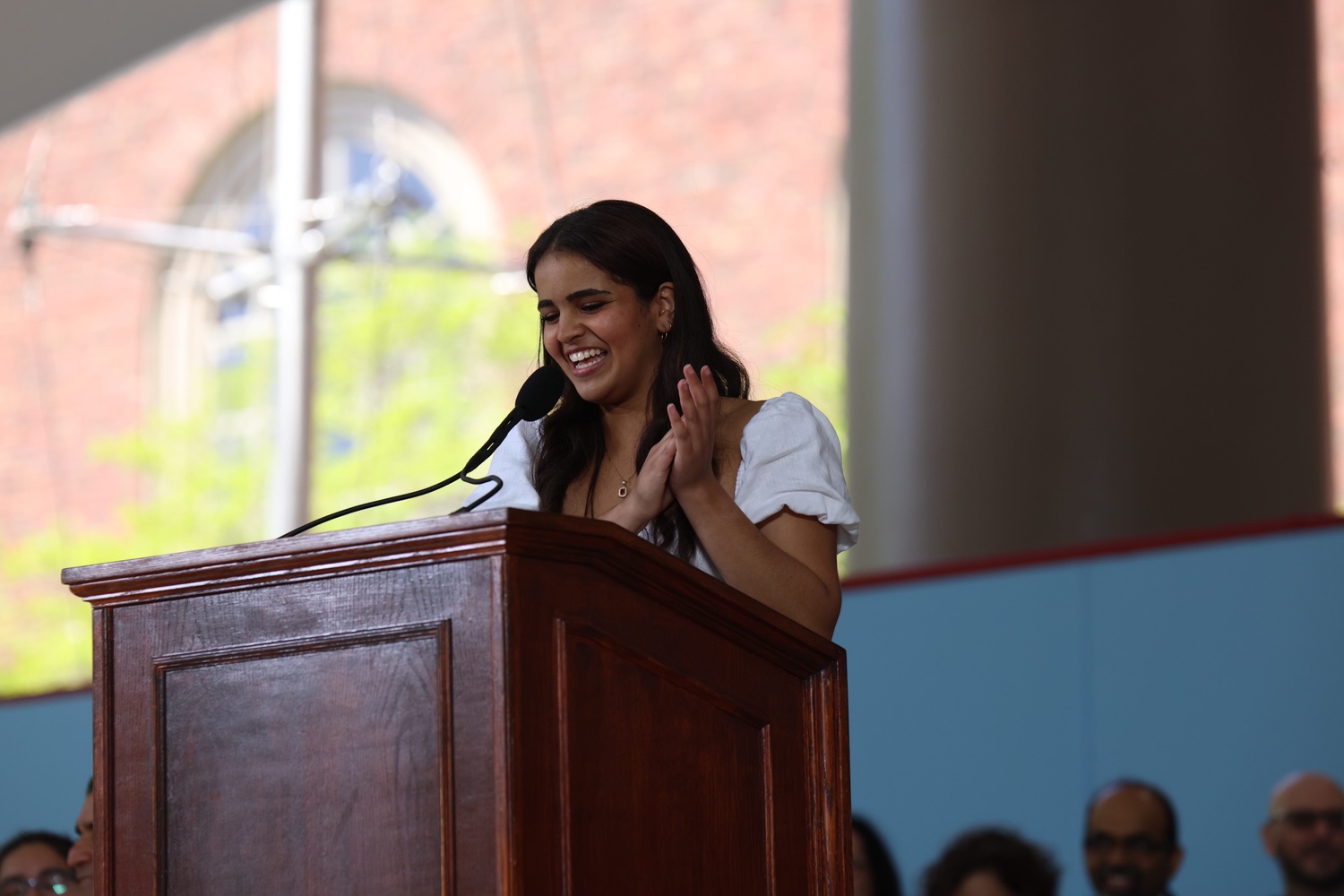 In the Harvard Oration, Andrew S. Yun ’22 discussed the importance of kindness amid Harvard’s competitive atmosphere.

“It is only when I chose to be honest about my shortcomings that I realized that amid the fierce competition, Harvard also has deep networks of support and care for those willing to seek them out,” Yun said.

In closing remarks, Class Committee Second Marshal Ruth H. Jaensubhakij ’22 reflected on the ways the Class of 2022 has changed during its untraditional tenure at Harvard.

“After Friday, our paths will diverge — for better or for worse,” Jaensubhakij said. “But right now, for this moment in time, we’re all here together. Every decision we’ve made, every class we’ve taken, every late night, every rehearsal and meeting and shuttle ride and spontaneous conversation, they’ve all led us right here.”

“This is an incredibly unique and special group, and this moment — our graduation from Harvard — is unlike any other,” she added.

Prime Minister of New Zealand Jacinda Ardern is set to address the Class of 2022 Thursday during Commencement exercises.