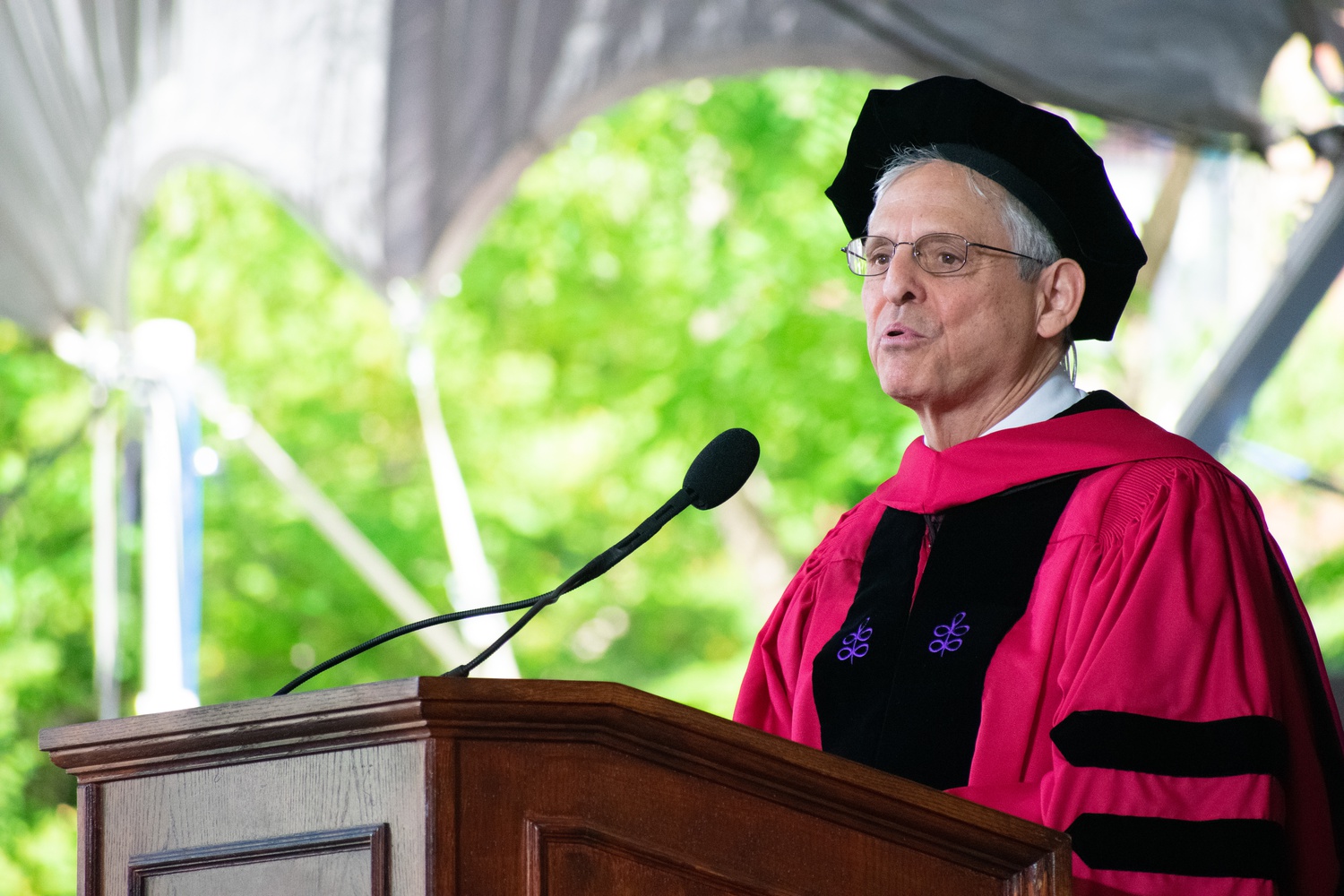 United States Attorney General Merrick B. Garland ’74 called on the Harvard Classes of 2020 and 2021 to pursue public service and “fulfill the promise” of democracy at their joint Commencement ceremony held on Sunday.

Harvard postponed in-person Commencement exercises for both classes due to the Covid-19 pandemic, but welcomed the recent graduates back to Cambridge for a historically large ceremony with the traditional pomp and circumstance.

Garland, a graduate of Harvard College and Harvard Law School, serves as the 86th Attorney General of the United States under President Joe Biden. Previously, while serving as chief judge of the D.C. Circuit Court of Appeals in 2016, Garland was nominated for the Supreme Court by former President Barack Obama, but Senate Republicans blocked his confirmation process by denying him a hearing.

Garland, a former Crimson editor, congratulated the “patient and indomitable” Classes of 2020 and 2021 on completing their education despite the pandemic, and urged them to commit to public service as he did during his time at the College.

“I hope you will make a promise similar to the one that I made — to devote some part of your life to public service,” Garland said. 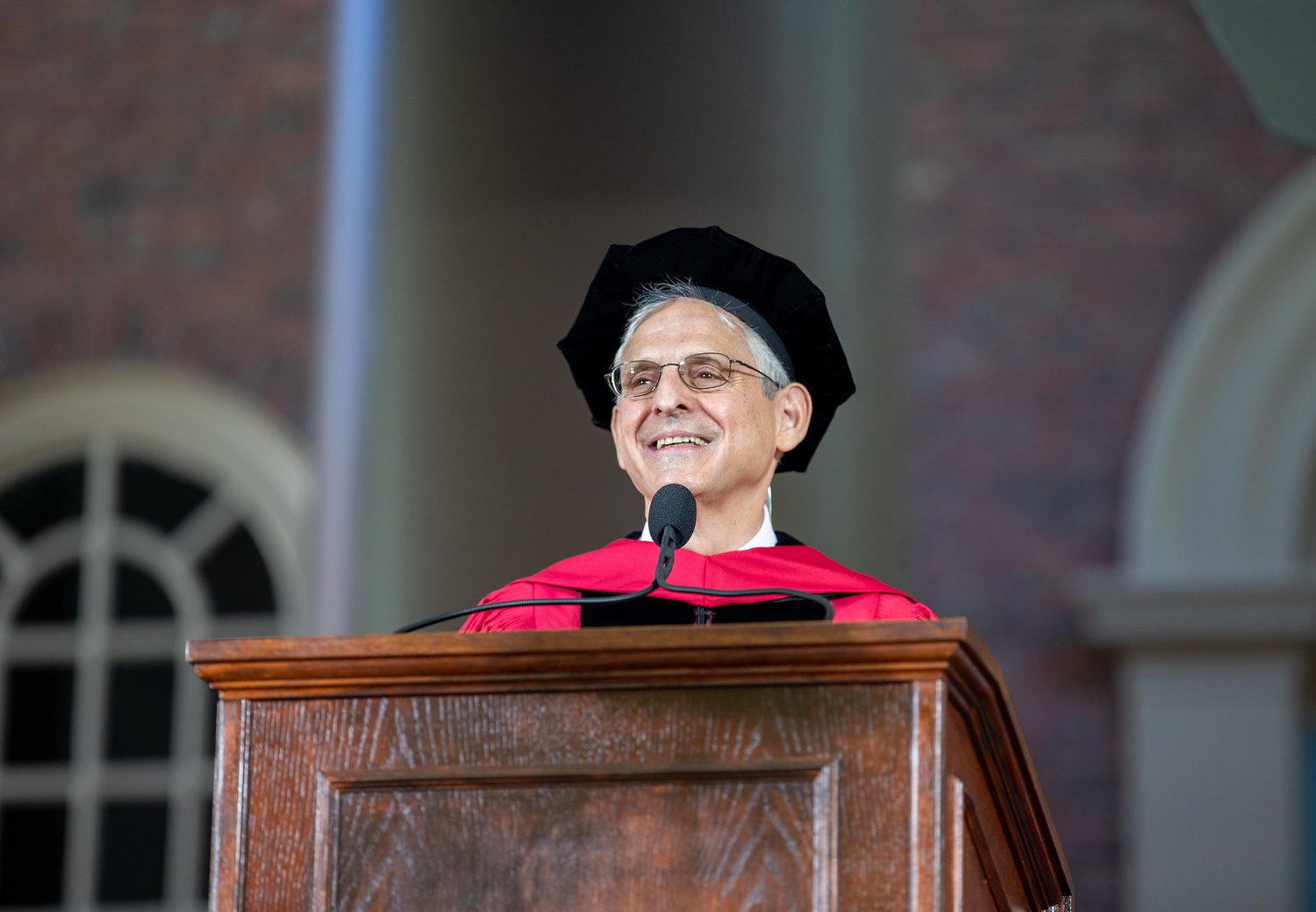 Attorney General Merrick B. Garland ’74 called on Class of 2020 and 2021 graduates to pursue public service. By Zadoc I. N. Gee

Many of Garland’s ancestors immigrated to the United States to escape religious persecution before World War I. Some who stayed behind, he said, were killed during the Holocaust. Garland said his enduring commitment to public service is his way of expressing gratitude for the country where his family took refuge.

“For me, public service is a way to repay the debt my family owes to this country for our very lives,” he said.

“As we gather today to celebrate this milestone in your lives, we are also holding onto an enormous amount of grief because of yet another mass shooting at another school in our country,” Garland said. “I know I speak for all of us, here, that our hearts are broken.”

Garland also told graduates there is an “urgent need to defend democracy” amid the war in Ukraine and following the insurrection at the U.S. Capitol on Jan. 6, 2021.

“In a democracy, people vote, argue, and debate — often loudly — in order to achieve the policy outcome they desire,” he said. “The promise of democracy is that people will not employ violence to affect that outcome.”

“You are the next generation that must devote yourselves to preserving our democracy and helping others protect theirs,” Garland added.

Shortly after the ceremony began on Sunday, more than a dozen Harvard affiliates, in partnership with the Boston Area Assange Defense, demonstrated at the Smith Campus Center. The protestors demanded that the Justice Department drop charges against WikiLeaks founder Julian P. Assange and prevent the journalist’s extradition to the United States.

Assange currently faces 18 charges related to his disclosure of classified information through WikiLeaks. In April, a London court ordered his extradition to the U.S. 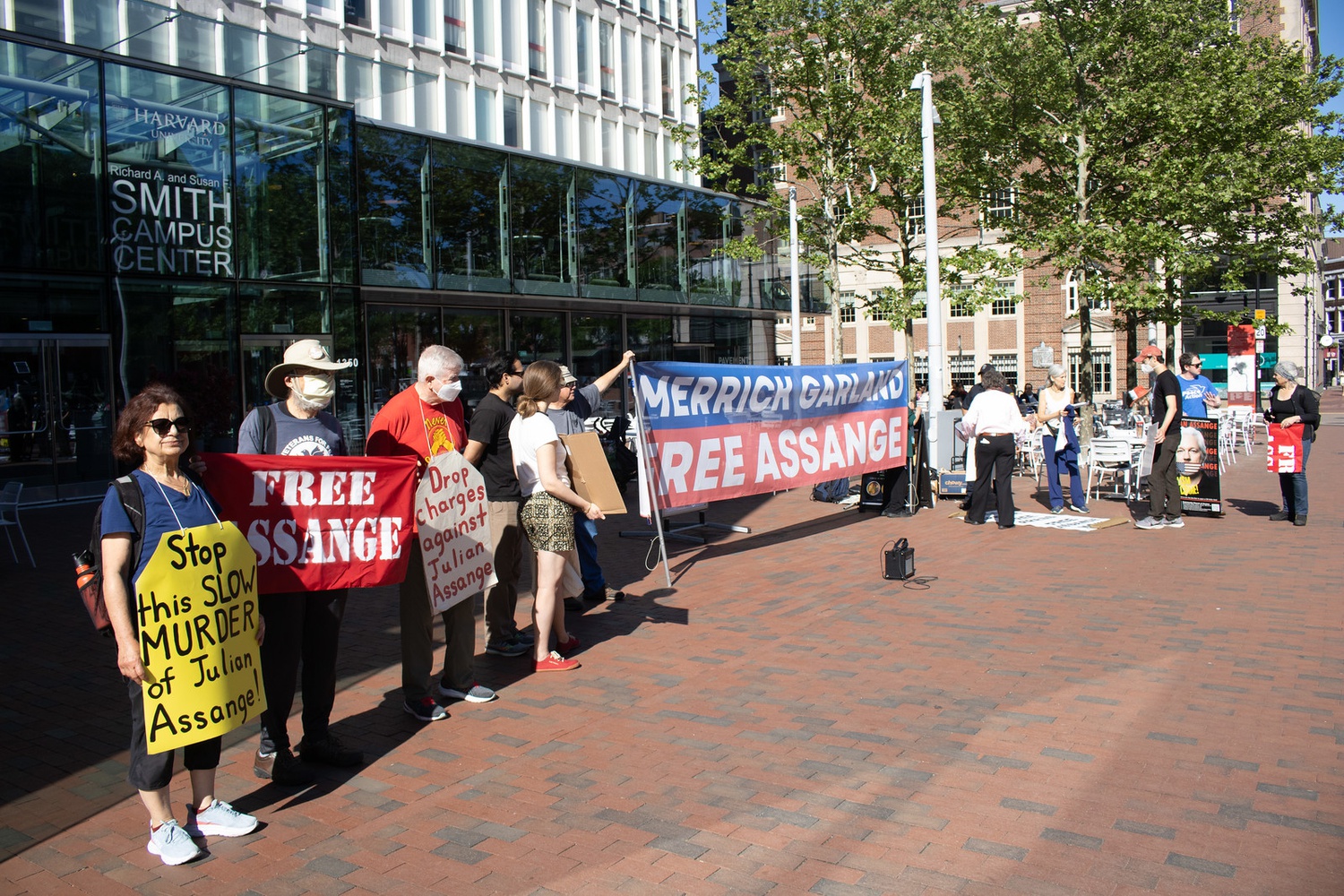 Protestors gathered on in front of Harvard's Smith Campus Center to protest a Commencement address by Attorney General Merrick B. Garland ’74. By Miles J. Herszenhorn

Michael A. Miccioli ’22, who helped organize the protest, said Harvard’s commencement would be a “good opportunity” to bring attention to Assange’s prosecution.

“We thought that rather than just glorifying Merrick Garland, the people of Harvard should be outraged that he’s being invited to speak,” Miccioli said. “If Julian Assange is prosecuted and convicted for his work, that would open the door for any investigative journalist to potentially be prosecuted in the future for their standard work.”

The DOJ did not respond immediately to requests for comment on the protest.

Kicked off campus in March 2020 as Covid arrived, the Classes of 2020 and 2021 had virtual Commencements in their respective graduating years. Former Washington Post Executive Editor Marty Baron spoke at the virtual 2020 Commencement, and Prairie View A&M University President Ruth J. Simmons addressed the Class of 2021 during their ceremony.

University President Lawrence S. Bacow delivered opening remarks, in which he called the decision to send students home during the pandemic “one of the hardest things I’ve ever done.” 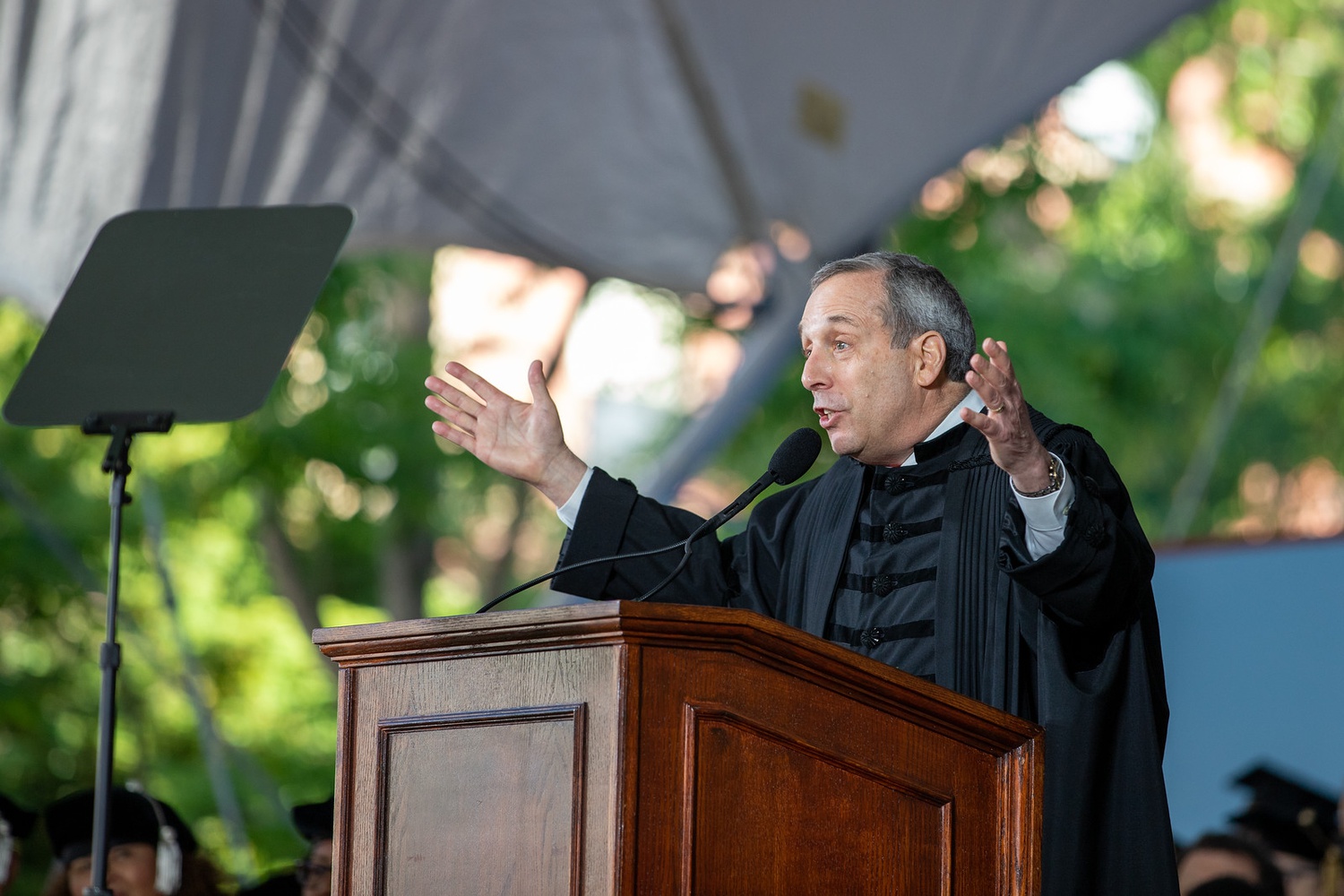 University President Lawrence S. Bacow addresses the Classes of 2020 and 2021 at Sunday's Commencement ceremony. By Zadoc I. N. Gee

“I’m not sure whether or not to call this day Commencement or, candidly, your first reunion,” Bacow said.

In the opening minutes of the ceremony, a plane pulling a banner with the address harvardmedhurtsworkers.org flew over Harvard Yard. The corresponding website — paid for by Boston’s International Brotherhood of Electrical Workers Local 103, which represents some Harvard Medical School contract workers — alleged the school is “undermining” its maintenance workers by pursuing pay cuts. 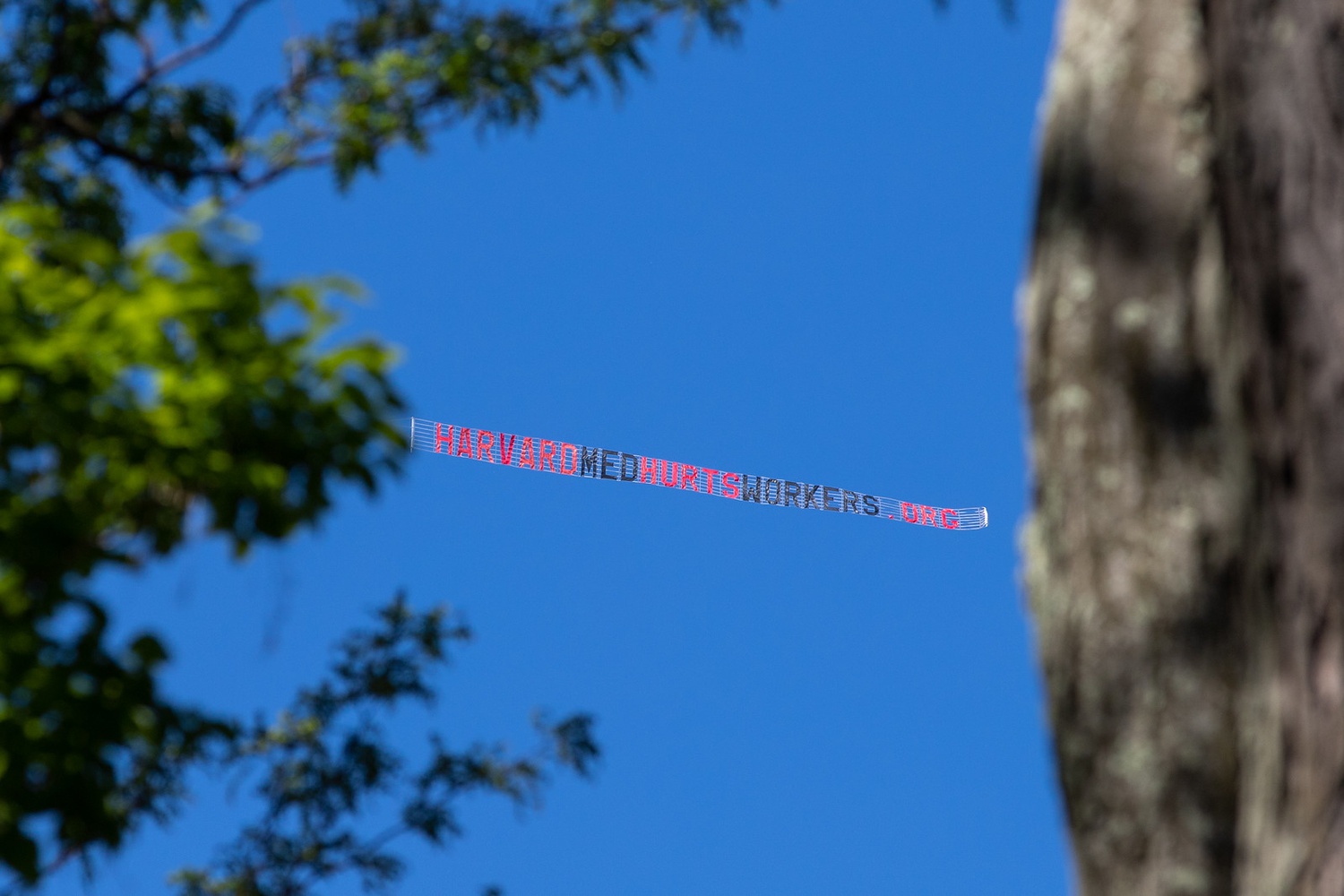 A plane flew over Sunday's Commencement ceremony pulling a sign protesting Harvard's treatment of its workers at the Medical School. By Zadoc I. N. Gee

HMS spokesperson Ekaterina D. Pesheva did not respond to a request for comment Sunday.

“The school is famously well-funded and more than capable of providing family-sustaining wages,” the website promoted on the banner reads. “Instead, it’s deciding to nickel and dime the people who work each day to keep its medical facilities safe and functioning.”

During the ceremony, Harvard conferred five honorary degrees, including a Doctor of Laws to Baron, whom University Provost Alan M. Garber ’76 called a “paragon of the press.” 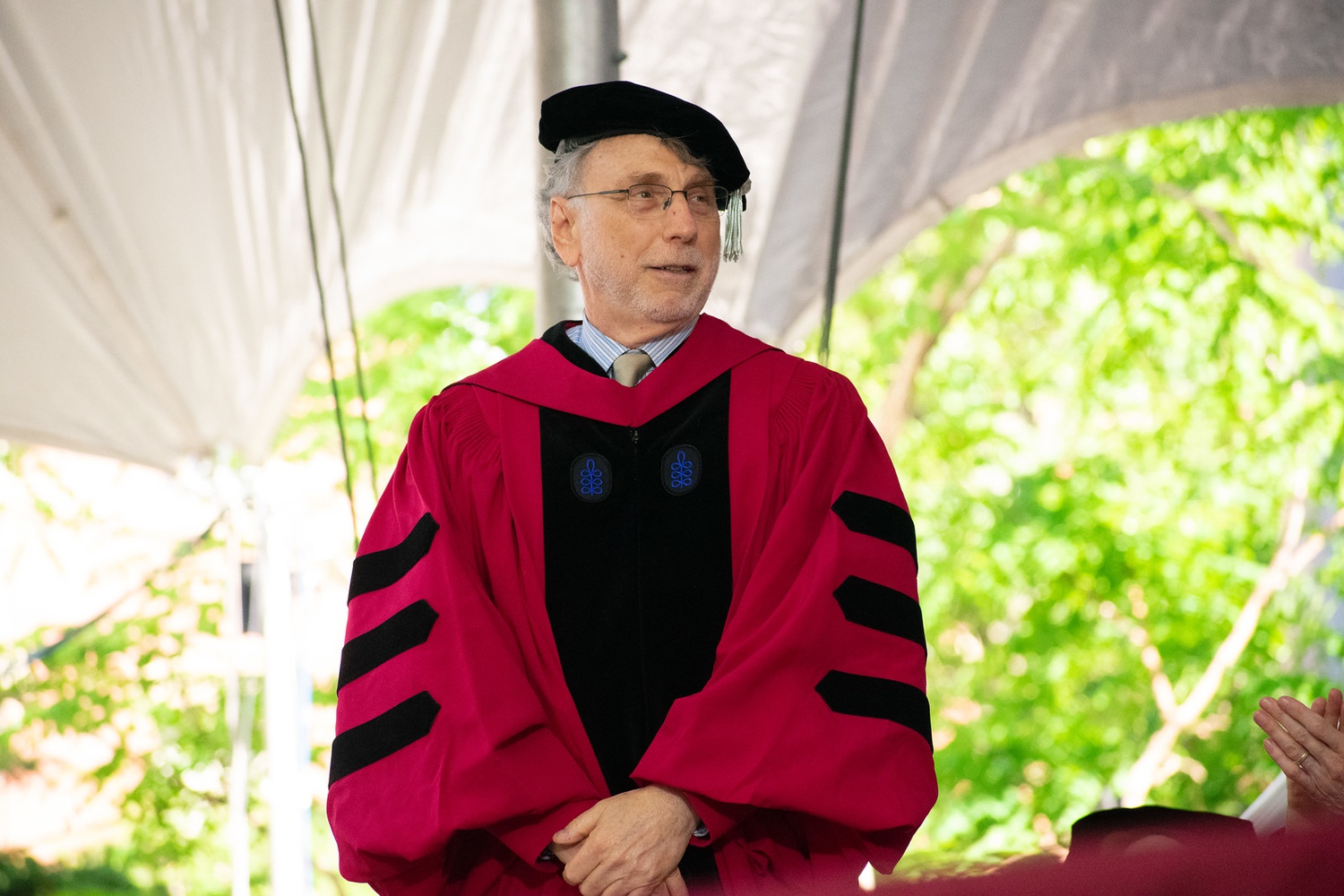 In the final moments of his speech, Garland, visibly emotional, said he had faith democracy will be better off when it is time for the Classes of 2020 and 2021 to “pass the baton” to the next generation.

“Although what I’m asking of you is daunting, I know that you are the next generation that will fulfill the promise this country represents,” Garland said.