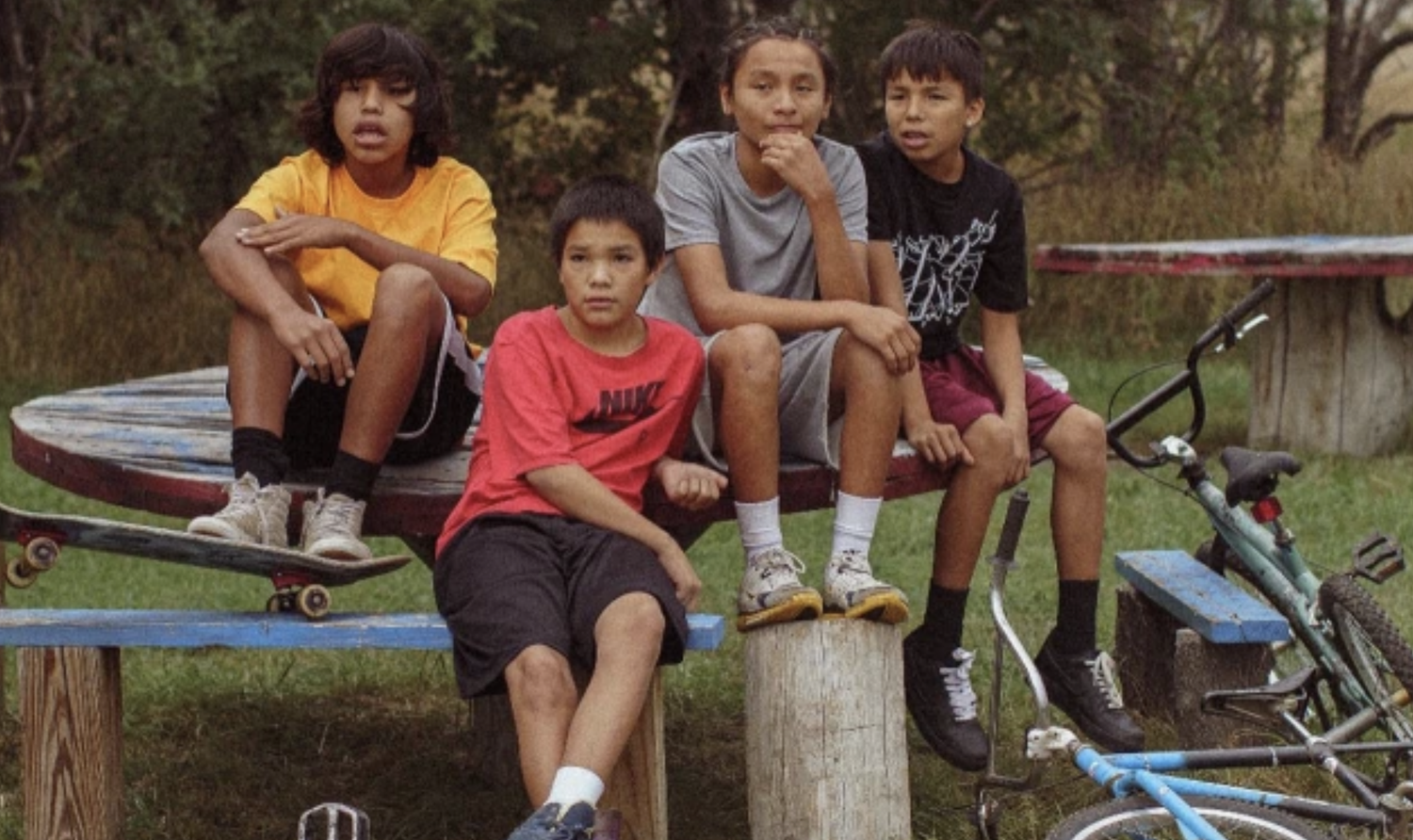 “War Pony" premiered on May 21 at the 2022 Cannes Film Festival. By Courtesy of Protagonist Pictures
By Harper R. Oreck, Crimson Staff Writer

Directors Riley Keough and Gina Gammell made their Cannes debut with the May 21 premiere of “War Pony,” an immersive slice-of-life feature set on South Dakota’s Pine Ridge Reservation that stands apart for its grounded subtlety amidst the grandiose melodrama of the festival lineup. Produced in collaboration with Lakota co-writers Franklin Sioux Bob and Bill Reddy and Indigenous producer Willi White, the film was inspired by Sioux Bob and Reddy’s experiences on the reservation. It follows two young men struggling to get by amidst the pressures of poverty, family turmoil and unsympathetic authority figures. The affecting drama is a triumph of communal filmmaking that highlights the perspectives of Native creatives, offering a fluid coming-of-age story that resists the narrative urge to insert artificial endings or draw conclusions from the nuanced realities of its environment.

Bill (Jojo Bapteist Whiting), a scrappy 23-year-old father of two, lives in uneasy limbo, bringing in sporadic income on odd jobs as he stays with his mother and tries to convince his unimpressed ex Echo (Jesse Schmockel) to take him back. His life is shaped by the ties tethering him to his community, from his responsibility to his two young children and their mothers to the money-making schemes he dreams up with his friends and his often antagonistic relationship with his own mother. Conversely, the film’s other lead Matho (LaDainian Crazy Thunder) is burdened by isolation, forced from childhood to navigate a harsh world without a consistent support network. After an argument with his father and a sudden tragedy leave Matho out on the street, he must find a way to take care of himself. As his opportunities for stability dwindle, he takes increasingly dangerous risks in an effort to maintain the brash, thrill-seeking identity he’s constructed among his friends. Rather than presenting a straightforward plot with a simple beginning, middle, and end, “War Pony” unfolds into an atmospheric, aching portrait of Bill and Matho’s lives, tracing their joys and heartbreaks with an intimate observational style.

The film’s naturalistic study of its well-drawn, charismatic characters creates an engrossing pace and affecting stakes even as the film transcends the structure of a plot-driven feature. That’s not to say that “War Pony” doesn’t have stirring highs and lows: it injects urgency, humor, and heart with imaginative storylines including Bill’s plan to make money by breeding poodles, his unlikely employment as an assistant to a sleazy white ranch owner, and Matho’s experience living with a relative who takes in child orphans and has them earn their keep by helping her package drugs. In each of these moments, all of the characters appear as three-dimensional people burdened by complex obligations and desires, a testament to the empathetic attentiveness of the filmmaking.

Throughout its runtime, the film imaginatively portrays its characters’ constant challenges not as a cheap ploy to ratchet up suspense or reduce their lives to grim vignettes, but instead to create an environment of continuous pressure amidst victories and pitfalls. “War Pony”’s continual portrayal of triumph and adversity demonstrates how forces of love, legacy and necessity shape the lives of its protagonists. As Sioux Bob told Deadline, “I just wanted everything I lived through in daily life, living on the reservation, to be portrayed through the film… in a lot of Native films it’s either the poverty porn or it’s about one topic.”

The film’s moving, authentic tone reflects its unusual origin story; the idea for the film was born seven years ago, after Keough struck up a friendship with first-time actors Sioux Bob and Reddy on the set of Andrea Arnold’s similarly hypnotic 2016 film “American Honey” when it was shooting in Pine Ridge. Keough introduced Reddy to her best friend Gammell and they hit it off, leading the pair to visit Reddy and Sioux Bob in Pine Ridge over the following years and experiment on a series of collaborative music videos and short films. Keough and Gammell spent a few years getting to know the Pine Ridge community with no plans for a feature film, but the death of Reddy’s pitbull Beast inspired the four friends to start making a film as tribute to the dog. The loss sparked a writing process that saw Sioux Bob and Reddy weave stories from their own and their friends’ lives into a portrait of two young men and a window into their lives on the reservation.

First-time actors Whiting and Crazy Thunder deliver emotive, shattering performances as the charming, inconsistent Bill and the overburdened, resourceful Matho. The realism of their acting is bolstered by an all-around excellent supporting cast and an engrossing script, which stands apart from other coming-of-age films at the festival with sharp dialogue, a slow build, and a moving last act that connects its divergent storylines without imposing a reductive conclusion.

Ultimately, “War Pony” is a striking, evocative, and beautiful story of youth and survival on the Pine Ridge Reservation. More broadly, it speaks to the urgency of making space and funding for Indigenous filmmakers and creatives to tell their own stories. The film took home the Camera d’Or, the jury-selected award for the best directorial debut in any Cannes selection category, but the festival and the broader film community still have a long way to go to support Indigenous filmmakers and recognize their work.