‘These Are Our Stories’: New Allston Mural Honors Rita Hester, Whose Life and Murder Inspired Transgender Day of Remembrance 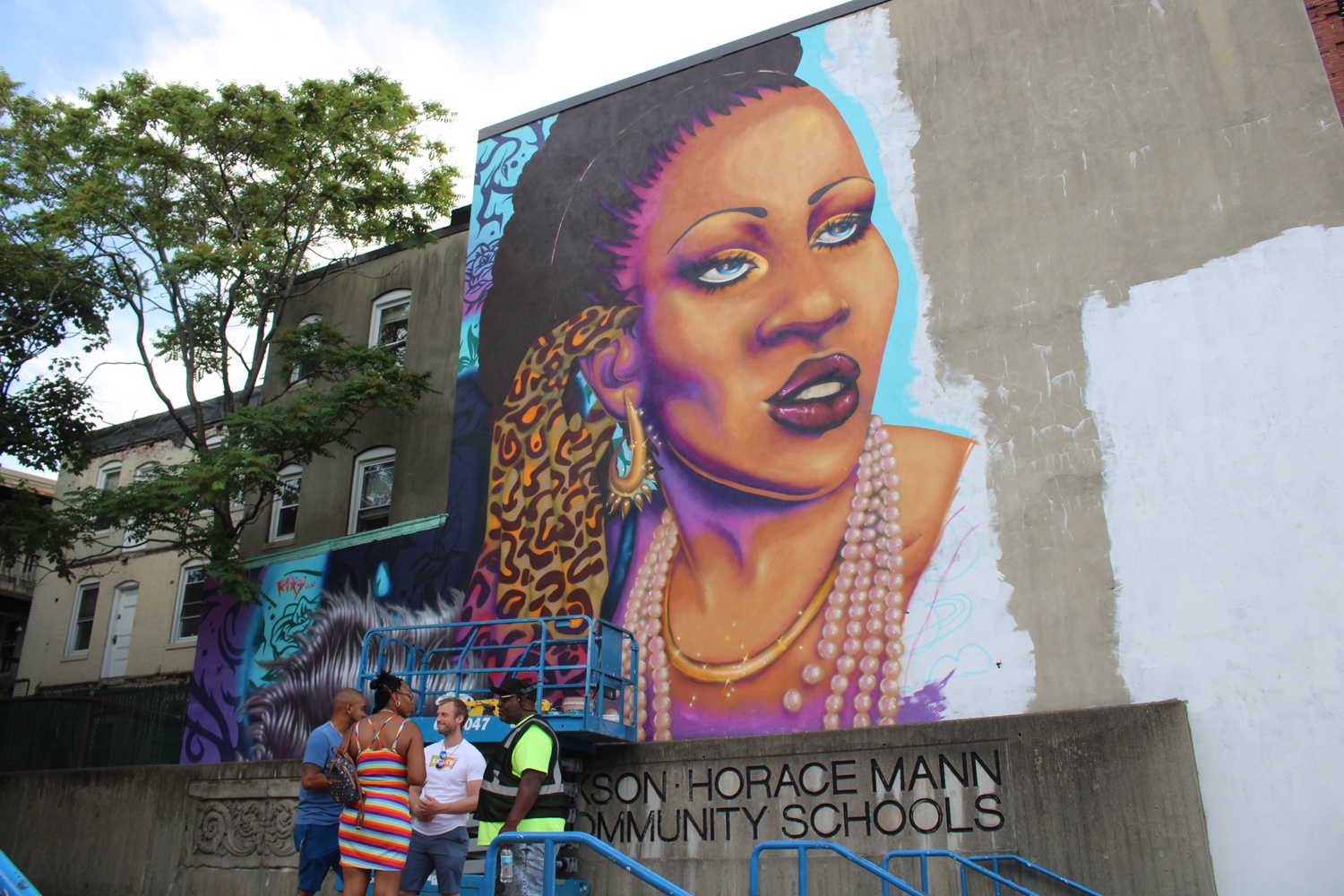 Standing in front of a colorful mural commemorating his late aunt, Rita Hester, Taufiqul Chowdhury took the microphone, turned to the artist, Rixy, and thanked her.

“You were able to capture so much beauty,” he said. “Rita loved animals, she loved cheetah print — she has so much cheetah print. Roses mean so much to our family and to Rita and to her mother, so to see those roses means the world to us.”

The City of Boston unveiled a mural last week depicting Hester, a transgender woman whose murder in Allston in November 1998 sparked the creation of Transgender Day of Remembrance.

The mural is located at 506 Cambridge Street in Allston. During the event, Rixy said she chose to name the piece “Rita’s Spotlight” to reflect how she wants viewers to see Hester.

“We’re all just admiring her and seeing her under her own light. It’s not about everybody else right now,” she said. “That confidence, that glow — that is so inspirational on its own.”

In an interview following the unveiling, Rixy said she agreed to work on Hester’s mural because she believed it deserved “so much care and love.”

“I really took this on because I felt like it aligned so much with my values, with what I felt like was necessary for Rita and the people around her that loved her the most,” she said.

Boston’s former artist-in-residence, Golden, first proposed the idea for the mural. In a June 22 press release, Boston Mayor Michelle Wu ’07 announced that the City of Boston had commissioned a mural in Allston honoring Hester as part of its Transformative Public Art Program.

To produce the mural, the city collaborated with the Boston Art Commission — an independent group of volunteers housed in the mayor’s Office of Arts and Culture that approves and commissions public artwork — and Street Theory, an artist-led agency that produces street art.

“This mural is a wonderful way to acknowledge the contributions of Rita Hester and Boston’s LGBTQIA+ community as a whole, and we’re so excited to bring this mural to the Allston neighborhood during Pride Month,” Wu wrote in the press release. “Whether it’s youth walking by on their way to school, or residents visiting local businesses in the area, we’re confident that this mural will continue to inspire and uplift the surrounding community for years to come.”

Rixy said in the interview she hopes the mural will create a “safe space” for people.

“I’m hoping that if maybe the rest of the world isn’t safe, at least the 50 feet right beside this wall is for you,” Rixy said. “That wall, the mural, the image represents you, represents that family so all of y’all are welcome to be safe and comfortable right here.”

As a lifelong resident of Allston-Brighton, Rosie C. Hanlon said she remembered Hester’s life and death.

“She knew who she was and what she wanted, and she wasn’t afraid to make that statement,” she said. “I think that she was a pioneer to having people accept who we are and why we are without judgment, and that’s pretty amazing.”

Chowdhury said that while Hester’s murder was never solved, she now “lives on in a different way” through the mural.

“The murderer is still out there,” he said. “Who knows, maybe that person has to pass by this every single day.”

Chowdhury said he hopes younger people will pass by the mural and see someone “powerful” who they might “see in themselves.”

The artwork will provide a space for people to convene, said Hanlon, who works as the administrative coordinator for the Jackson Mann Community Center, which is adjacent to the mural.

“It opens up a whole new avenue of potential and a way to unite people, which I think is really important,” she said. “That’s community, isn’t it?”

Rixy, a Roxbury native, said she is “very passionate” about working on local Massachusetts art projects like the Hester mural, which she said strive to empower “women and femme voices.”

“These are our stories, these are our walls, that’s our money,” she said. “We’re the ones that really need to be making this work happen.”