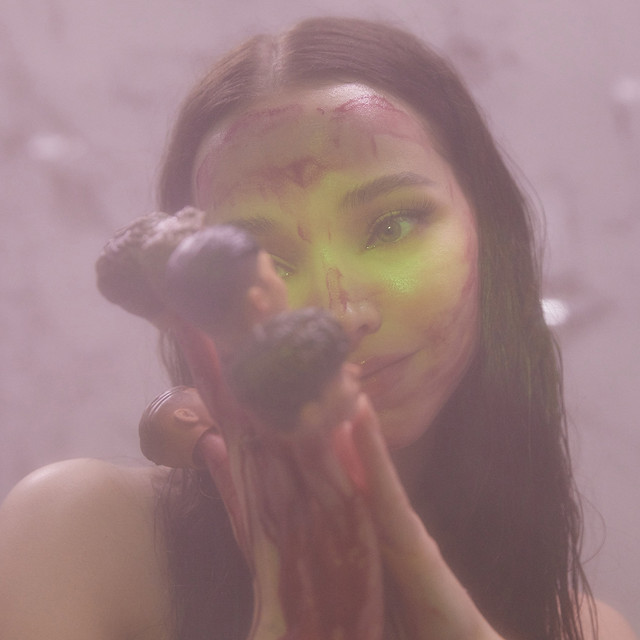 “I eat boys like you for breakfast / One by one hung on my necklace,“ sings American singer and actress Dove Cameron in her latest single “Breakfast.” With her newest release, Cameron offers fans a feminist pop anthem that combines its deliciously dark, classy sound with social satire and political activism by flipping traditional gender roles.

Since coming out as queer in 2020, Cameron — who first found fame as a Disney child star — has taken a more mature and politically charged turn in her music, resulting in songs like “Breakfast.”

The track, released on June 24, focuses on inverting traditional, often oppressive gender norms. In response to the overturning of Roe v. Wade this summer, Cameron felt the need to reinvent the previously less political music video of the same song. “This [decision] feels like we’re going back to the 1950s,” she told Vogue in an interview, so she decided to use a ’50s aesthetic for the setting, objects, and cinematography of the music video.

Its brilliant twist is the reversal of traditional gender roles, highlighting the oppression that people have grown so used to that it doesn’t stand out until turned on its head. Before the song starts, Cameron’s voice plays in the background: “You wanna talk about power? My husband gets to stay at home and watch TV while I work every day,” making clever use of the song’s pre-chorus: “Ooo so you wanna talk about power? Ooo let me show you power.” Sung with an excessively sweet, rich voice, these lyrics attain a mocking, ironic character to satirize men who control and belittle women.

Cameron demonstrates gendered power inequalities in multiple ways: All the executives of the company shown in the music video are female, while male actors play their underlings who serve coffee and deal with unwanted touching. The leading character, played by Cameron herself, mistreats her house husband as he brings her homemade breakfast, intoxicates one of her subordinates, and sexually assaults him. "It's uncomfortable to watch at parts, and that was the aim," Cameron told People. "I wanted to show people how ludicrous these situations are, and how damaging, limiting, trapping and diminishing it feels to be a woman every day."

When the victim later storms out of the office to get an abortion, she laughs with her co-workers: “Oh my god, men are so f*cking emotional, like, get it together, you know,” satirizing the stereotype of irrational, volatile female behavior. Perhaps the video’s most uncomfortable and poignant scene is when the man, after getting the abortion, is told by his doctor that “everything will be okay, but next time, make sure you don’t drink so much and make sure you’re dressed appropriately so you’re not provoking women!” and hands him a brochure titled “Good Moral Behavior for Young Men — How to Stay Pure for Your Future Wife.”

The music video touches on so many crucial and timely topics in feminist discourse — including sexual assault, reproductive burdens, the glass ceiling, abortion rights, and stereotypes — that it far surpasses the song itself in significance. One could also describe them as two sides of the same coin of female empowerment, with the song being a ruthless anthem criticizing male dominance.

“Breakfast”’s instrumentals consist almost entirely of strings with a groovy cello bass line, which surprisingly makes for a remarkably catchy pop song while simultaneously achieving a classy, dramatic sound. Cameron’s raspy, smoky voice placed on top contrasts deliciously with the classical instruments, resulting in a refreshing genre blend. With unapologetic, maniac lyrics such as the chorus’s “I eat boys like you for breakfast” or “let me show you power,” the song, by itself, is a trendy female empowerment song, but the music video adds complex layers of societal critique.

Cleverly evading the cliche of simply revealing the whole thing to be a reverie, the video does not end with the fantasy of flipped gender roles — instead, in a sudden, goosebump-inducing return to our world, a TV reporter announces the overturning of Roe v. Wade with the words “This decision feels like a huge step backward.” Then, the phrase “NOT THE END” appears on the screen, followed by a call to action in the form of voting and donating to selected organizations.

All in all, “Breakfast” is a truly remarkable feminist achievement that demonstrates the myriad ways in which the patriarchy constrains and harms women while simultaneously being an objectively pleasing, catchy pop hit.

— Staff writer Larissa G. Barth can be reached at larissa.barth@thecrimson.com.