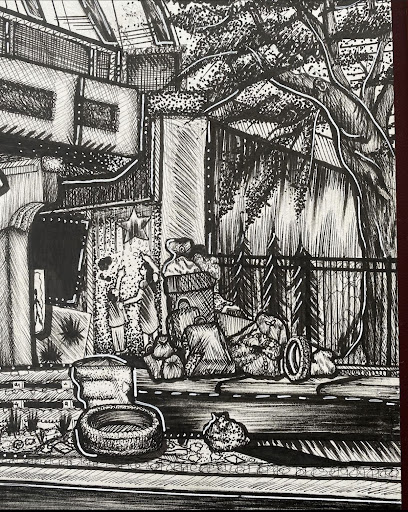 Close-up of "The Purge."
By Katherrin A. Billordo, Contributing Writer

Katherrin A. Billordo approaches the latest installment of this column with artowrk depicting lush multicolored flowers, public artwork, and smooth jet-black cement. Using a range of techniques with a simple pen, the goal is to depict gentrification in modern-day Chicago. 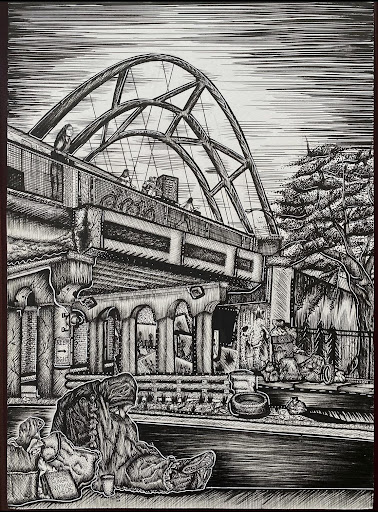 “The Purge.” 16.5" x 12.” Pen. A hyperbolic depiction of gentrification. By Courtesy of Katherrin A. Billordo

Formerly an abandoned rail line, now a popular walking trail, the 606 is a greenway project that runs through Chicago's most notable northwest side neighborhoods. Unfortunately, these urban “beautification projects'' are much more problematic than they may initially seem. 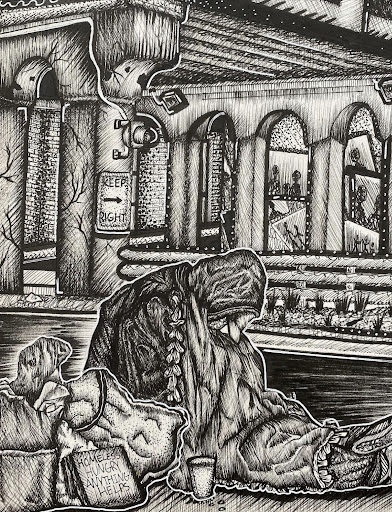 Close-up of "The Purge." By Courtesy of Katherrin A. Billordo

Graffitied murals, overgrown weeds, cracked support pillars, and displaced residents lie below the trail. A closer inspection of the scene reveals the harsh reality of the 606 and other public projects that indirectly trigger gentrification. Despite the city’s investments in new amenities, concerns of community members most affected are ignored. Property values rise and residents and business owners are displaced in favor of wealthier counterparts.

Close-up of "The Purge." By Courtesy of Katherrin A. Billordo

The piece’s title, “The Purge,” references both this displacement and the movie of the same name, drawing a hyperbolic connection to their similar levels of chaos. The stroke techniques used exemplify this disorder. Cross-hatching (drawing multiple angled lines over each other), stippling (repeated dots), and scribbling fill the piece with shadows to give it a dark, gloomy, and disorganized look.

—Katherrin A. Billordo ’26’s column, Corazón, is a painting/sculptural series that depicts and explains aspects of her lived Hispanic-American experience and the technical artistic decisions behind the pieces.