Arthur Sackler and A Victim’s Legacy 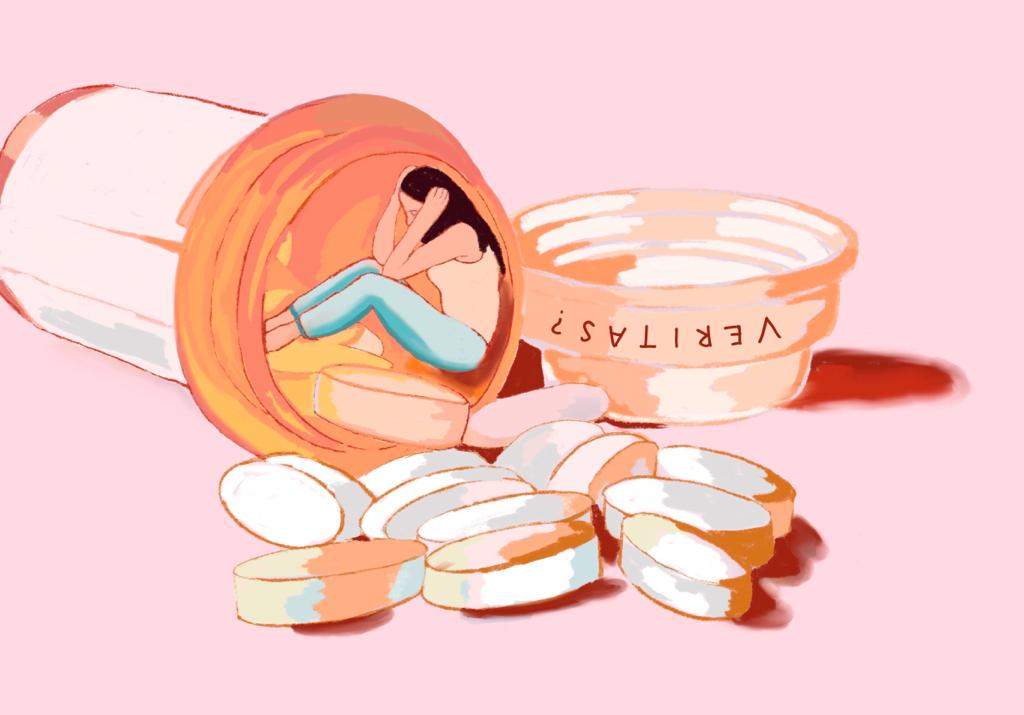 Rhonda Lotti heard a knock on her door.

It was a Monday, July 11, 2011. Rhonda was at her home in Watertown, Mass., barely a 15-minute drive from Harvard’s campus. She had spoken to her 19-year-old daughter earlier that morning on her way to work, chiding her for not coming home the night before.

“I passed her in the hall and just said ‘You know Mariah I’m really not happy with this and we’re going to have to talk about this when I get home from work.’ And I rushed out the door.”

But that would be the last time Rhonda spoke to Mariah. By the time the police came to her door her daughter was already dead.

Rhonda’s face lights up when I ask about Mariah. She describes her as smart, sarcastic, witty. And, of course, kind. At 19, she was eager to travel, to go beyond the “really safe comfort zone” of outer Boston. Her future was uncertain but bright — she had an interest in the technical work behind music production; a love for words; and an eye on pursuing a journalism degree at New York University. Her mother even used to joke that she should go to law school, because “she could argue about anything” and prove persuasive.

She never got to do any of it. That summer night Mariah overdosed on heroin, becoming one of the roughly 450,000 Americans to succumb to an opioid overdose since 1999. Her mother thought she hadn’t taken opioids in almost a year, and still believes she relapsed in the weekend leading up to her death. But Mariah had wrestled with substance abuse disorder in the past, starting with prescription medication like Oxycontin and switching to heroin “when they started cracking down,” according to her mother. Painkillers were, after all, very accessible — irresponsibly so.

Mariah’s tragic journey matches a broader trend — roughly four in five new heroin users started out abusing prescription painkillers; most adolescents who misuse painkillers get them for free through friends or relatives. It was the origins of that trend — and a fair degree of indignation — that would take Rhonda several years later to one of the many protests against Harvard’s Arthur M. Sackler Museum.

The Sackler family has found itself at the center of a national controversy over the origins of the opioid epidemic. It was a Sackler venture, Purdue Pharma, that first introduced Oxycontin in 1995, arguably kickstarting the opioid epidemic and reportedly reaping billions worth of profits. Their company has faced thousands of lawsuits — yes, thousands — over the years, and recently agreed to a tentative $8 billion-dollar settlement (one that is still likely to leave their fortune mostly intact). Their donations have been refused by the prominent artistic institutions that once lavished them with honors; at least one hedge fund has decided to stop handling their financial assets.

So why is Harvard different? Why our public reluctance to sever ties with the Sackler name? Are we seriously less morally stringent than a hedge fund?

Perhaps we are. But the truth is that Arthur M. Sackler’s connection to the opioid crisis is rather complex. He and his brothers Raymond and Mortimer bought Purdue Frederick, Purdue’s direct predecessor, but Arthur died nine years before Oxycontin’s release. His direct descendants sold off their stake in the company shortly after and haven’t been mentioned in any of the family lawsuits; his widow, Dame Jillian Sackler has embarked on a very public campaign to clear his name, drawing a distinction between “fair-minded people” who seek justice for the epidemic and those who choose to “vilify” her husband (In a written statement delivered by spokesperson Janet Wooten, Ms. Sackler reiterated her husband’s innocence, and said that he would have been “appalled” by Purdue’s “deceptive marketing.”). Institutions like our own have thus been reluctant to sever ties with Arthur Sackler. As Rhonda puts it, “museums will love to tell you that Arthur Sackler died before Oxycontin came on the scene and that he had nothing to do with it, and he’s completely innocent.”

But the reality is more complex — and certainly uglier.

Arthur M. Sackler might have passed before the Oxycontin was first commercialized — but his innovations in the field of medical marketing were crucial in shaping the aggressive marketing approach that made it a success first, and a tragedy later. The key to understanding the opioid epidemic lies in the advertising of the painkillers themselves, which he revolutionized. The Medical Advertising Hall of Fame posthumously induced him, proclaiming that “no single individual did more to shape the character of medical advertising.”

Harvard Medical School Professor Scott Harris Podolsky ’93 described him as playing a “key role” in the transformation of the field in the second half of the 20th century, highlighting his collaboration with Pfizer in the 1950s. Podolsky says this role involved helping pioneer flashy advertising that included a legitimizing “patina of science”; advertising the “broad spectrum” of uses for a drug; and radically increasing the targeting of clinicians through pharmaceutical detailing. Under his guidance, Pfizer’s drug sales force multiplied exponentially, increasing from eight to 2,000 in under three decades, and implementing the kind of problematic industry tendencies — like gifting meals and free samples to clinicians — that we face today.

Of course, the emergence of these practices “generally encouraged” the overprescribing of medication. As Podolsky puts it, available evidence suggests that “marketing plays a great role in the overexpansion of use" of opioids, not only when used deceptively (like Purdue has been accused of doing), but more generally because of the “conflation of commercial goals with public health goals.” And so, despite his passing, when Oxycontin came around, Purdue made ample use of the framework that Arthur Sackler had pioneered. It hired the services of I.M.S, a company co-founded by the late Sackler that offered detailed information about doctors’ prescribing habits and used to target communities susceptible to Oxycontin. It engaged in large-scale physician “education” that mimicked Arthur’s detailing; it targeted physicians aggressively and personally. Trying to separate the epidemic from the architect of the commercial tactics that enabled it is disingenuous at best.

And so, onto the inevitable question — how should Harvard reckon with his controversial figure?

Activists have repeatedly called for the University to rename the Arthur M. Sackler Museum; University President Lawrence S. Bacow has stated that such a move would be "inappropriate” (University spokesperson Christopher M. Hennessy declined to comment on the matter). Rhonda herself isn’t entirely sure. She’s hardly keen on Arthur Sackler, deeming him “not innocent by any stretch of the imagination.” Yet her position has shifted since she attended the museum protest. She believes removing his name would amount to a whitewashing of our history. Instead, she’d rather see the museums reflect the full Sackler tale, “the dark side of their involvement.” As for the University, she seems less focused on apologies and more eager to see programs for those who have struggled with substance abuse disorders; exactly the kind of programs that could have proven crucial to Mariah. I’m not exactly surprised — her multiple allusions to feeling grateful for the support she’s received had already made me suspect that she might favor a more restorative, introspective approach than merely removing a name.

Perhaps that’s what shocked me while writing this piece — the sheer contrast between the two sides of the narrative. Rhonda Lotti opened up about losing her 19-year-old child. She trusted me, a complete stranger, barely the age of Mariah when she passed, to tell her story; she agreed to a video conference from her phone and, voice breaking, fidgeting with her glasses, opened up gracefully about the biggest loss a parent could imagine.

Jillian Sackler’s statement rejected any suggestion that Arthur Sackler might have been anything short of perfect, or that his name might not be worth championing. It struck me that she doesn’t seem to begin to understand why some blame her late husband; or even sympathize with the idea that, even if she believes in his innocence (even if she were right!), the concerns voiced by Rhonda and other victims’ families shouldn’t be discarded as scapegoating. Instead, she complains, against one of the many institutions that bear his name, about the prospective damage to Arthur’s “legacy.”

I wonder whether Mariah deserves a legacy too.