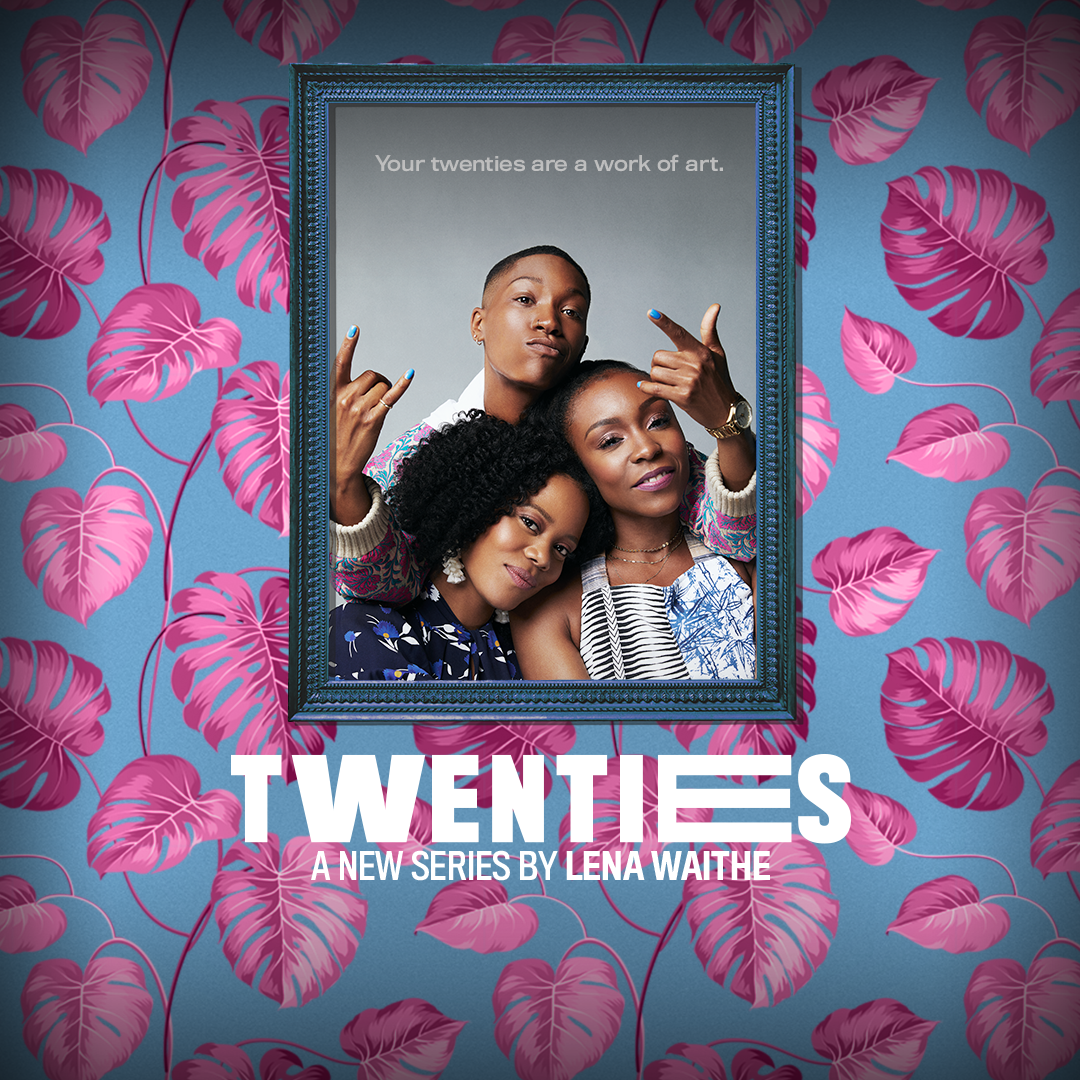 Promotional image for "Twenties" by BET. By Courtesy of BET
By Victoria A. Kishoiyian, Contributing Writer

Following the 1969 Stonewall Uprising, there was a slow yet sharp change in public consciousness: Audiences were more willing to consume content with queer characters. Though many creators attempted to combat cultural exclusion and social erasure, the prevailing representations of queer Black people from this period were often very speculative and simple, almost symbolic of the dissonance between the acceptance and aversion different parts of American society felt post-Stonewall. Today, most mainstream television writers still heavily rely on simplistic tropes when representing queer Black people in their work. This is not surprising. Television, for the most part, reduces race and sexuality to plot points — the conflict faced by a protagonist coming of age and fantasizing about “freedom.”

Nevertheless, several committed television writers are keeping up the fight to rewrite the landscape of BGLTQ+ representation, and to liberate queer Black actors from the limitations of playing “Black” and “gay,” rather than embodying a complex character. Lena Waithe is one of the writers whose persistence paid off.

After winning an Emmy Award for writing a 2017 episode of Netflix’s “Master of None” based on her own coming-out-story, Waithe was offered the opportunity to realize her semi-autobiographical comedy show “Twenties,” which was first shared in a series of YouTube videos in 2013.

In anticipation of the show's 2020 release, I eagerly revisited the original and obscure four-episode web series authored and acted out by Waithe. The episodes are less than five minutes and bear a resemblance to a solid set of “Saturday Night Live” sketches, presenting witty quips and culturally-relevant commentary. “Twenties,” the short-lived web series, belonged to the entrepreneurial, “DIY”-television era of the 2000s which was more concerned with quality, relatable comedy than excessively educational entertainment; popular web series such as “Lonely Island,” “Broad City,” and “The Misadventures of Awkward Black Girl” dominated this digital revolution.

I was excited for what the revitalized, fully-funded version of “Twenties” would offer. And, after finishing the first two seasons of the show, I was impressed and fulfilled. The show possessed a defiant dimension unheard of in Hollywood; it was startling and soul-stirring because of its self and social awareness. While I could commend “Twenties” for its groundbreaking representation of queer Black womanhood, I prefer to not praise the show solely because of the gaps it fills. Instead, I will emphasize that the strength of Waithe’s “Twenties” lies in how it grapples with the issues which afflict the entertainment industry. Specifically, how Waithe attacks the unwarranted acclamation of mediocre and oftentimes reductive Black art.

“Twenties” follows Hattie (Jonica “JoJo” T. Gibbs), a 24-year-old Black masculine-presenting lesbian and an aspiring television writer living in Los Angeles. Throughout the show, she navigates housing insecurity, relationship trouble, and professional development alongside her best friends Marie (Christina Elmore), a television executive, and Nia (Gabrielle Graham), a yoga instructor and aspiring actress. In the pilot episode, Hattie, Marie, and Nia watched a drive-in movie and discussed their feelings on “My Bae,” a fictional show created by Black creative and industry veteran Ida B. (Sophina Brown). “I like that it’s about Black love,” explained Nia. “And I am just glad it exists,” asserted Marie.

Responding to Nia and Marie’s opinions, Hattie said, “Those are not good reasons to like a show.” “We need to support Black shit!” exclaimed Marie. Hattie snapped back “No, we need to support good shit that just happens to be Black.”

As I listened to the three women argue about whether they must support “My Bae” for the purpose of supporting Black art in general, I thought about my own hesitancy to critique Black programming — a dilemma rooted in feelings of “appreciation” and socially-imposed obligation. I feel almost protective of and maternal towards shows which center Black characters, as though they are fragile and would be swiftly taken away from television if I withdraw my support. There is a competitive, unsettling tension between thinking that a show is middling in its quality yet progressive in its representation. But Waithe is well aware of this tension and depicts a nuanced understanding of it.

Later in the “Twenties” pilot, the tension is re-examined through a conflict between Hattie and Ida B. during Hattie’s interview to work as her assistant. After Ida B. asked Hattie why she wanted the position, she confronted Hattie with years worth of Hattie’s own tweets which condemn and mock “My Bae.” Then, Ida B. read aloud one of Hattie’s most provocative criticisms, arguing that “The saddest part about this show is that the people making it think it’s brilliant. But the truth is the direction is weird, the writing is awful, they need somebody to tell them that this ain’t it. Well I guess I gotta be that somebody. Dear Ida B., this ain’t it.”

When Hattie attempted to recant her critiques, Ida B. asked her to be truthful. So, Hattie insisted that the show “sucks” and challenged Ida B. to use her platform to do more than “showing a dope Black woman falling in love with a fake-ass Billy Dee Williams.” Before requesting that Hattie leave, Ida B. told Hattie to wait until she has her own platform. Only then can she create the Black art she wishes to watch.

To me, the exchange between Hattie and Ida B. was especially interesting because, when writing “Twenties,” Waithe was much closer to Ida B.’s position than Hattie’s — and because several of the criticisms cast upon “My Bae” have been aimed at Waithe’s work, too. In this regard, “Twenties” is relentlessly self-aware: Waithe knows that the high standards Black creatives are held to apply to her own creations and that her writing of Hattie, the first Black masculine-presenting lesbian on prime-time television, will be heavily scrutinized for its accuracy and ability.

Since Waithe understands the burden of representation placed upon Black showrunners, her writing in “Twenties” is intentionally complex. Yet, she also satirizes and mocks the notion that “Twenties” must represent vague conceptions of “Blackness” and “queerness,” as neither are monolithic or ​​truly definable.

The discussion surrounding whether Black television writers must fill the gaps in representation and whether Black audiences have an obligation to support unremarkable “Black television” — a genre which I resist as the race of the characters and creators serves as an inadequate unifier — is admittedly complicated. And Waithe’s criticisms, voiced by Hattie, are controversial because Waithe’s creations often offer the same simplistic, stereotypical writing that Hattie opposes. Most recently, Waithe’s “Them,” a drama series released on Amazon Prime in April of 2021, was widely viewed to be an inappropriate exploitation of Black trauma.

“‘Them’ fails not merely because of its opportunism, but because it has nothing particularly intelligent to say about the gratuitous violence and compounding terror it depicts,” wrote Vanity Fair critic Cassie da Costa. Further interrogating the intelligence of the writing in “Them,” Candice Fredrick of TV Guide posed the pointed question: “Who are these characters when they are not actively battling or succumbing to the menace of whiteness?”

The four Black characters in “Them” are reduced to the problems their skin colors provoke. This misrepresentation left me wondering the answer to one query: What would Hattie say about a show so concerned with the white gaze that it refuses to see Black people beyond their persecution?

This is not the first time Waithe was criticized for carelessly misrepresenting Blackness in her work. Four months before the pilot of “Twenties” aired, Waithe and director Melina Matsoukas released “Queen & Slim,” a romantic crime drama which earned average reviews from Black critics. I agree with the assessments which deemed it self-serious, clumsy, and presumptive. During the first and only sex scene between the show’s titular couple, Waithe and Matsoukas continuously cut to shots of a protest taking place somewhere else, in which a Black teenager the couple met earlier in the film shoots and kills a police officer. The juxtaposition wasn’t particularly jarring. Rather, it felt impulsive and overly-concerned with its own aesthetic and political message. But several Black cultural critics — such as Vulture’s Angelica Jade Bastién and The Atlantic’s Hannah Giorgis — who wrote commentaries which resemble my own criticisms were met with backlash: many Black fans of “Queen & Slim” viewed their evaluations as a form of “racial betrayal.”

The concept of “racial betrayal” adds a new dimension to the already complex conversation about what Black people should do about mediocre Black art. Is pointing out the flaws in Black programming problematic, acting as a strange form of Black-on-Black betrayal? Though I think the way Hattie pointed out the flaws in Ida B.’s “My Bae” was excessively critical, I find it problematic to never point them out. And, I find it equally problematic to correlate disagreement or dissatisfaction with disloyalty or disrespect.

Despite my disliking of their use of the word “betrayal,” I admit that the fans presented strong arguments about the potentially problematic aspects of criticizing “Black television”: They cited the obstacles Black people face when navigating Hollywood and the economics of the entertainment industry as reasons Black critics must wholly advocate for and uplift Black creatives. Additionally, the phrase “racial solidarity” was repeatedly called upon. Eventually, Waithe herself joined the discussion and declared that “we haven’t overcome until we can have honest opinions about each other’s work in public.”

She never asked for people to like or support her work because it centers Black people, which revealed her depth and potential as a television writer. “I’m sending love 2 every black critic whether you loved it or hated it. You have the right to write your ass off about it. And y’all have,” tweeted Waithe.

After reflecting on the contents of the contentious Twitter debate, I still struggle to understand the importance of “racial solidarity” and the meaning of “racial betrayal.” I can’t grasp why “racial solidarity” doesn’t allow for authenticity. As a Black aspiring cultural critic, I believe that it’s my responsibility to hold Black art to the same standards as all art, spotlighting the work of Black creatives without granting it unwarranted praise simply because it’s Black. Adhering to Hattie’s assertion in the “Twenties” pilot, I strictly support good art which just happens to be Black — and everyone should. Only then will television move past the simplistic renditions of Black people which both Waithe and I wish to see eliminated from entertainment.

—Victoria A. Kishoiyian’s column, “If You’re Not Invited to the Party, Throw Your Own: Sitcoms on Black Womanhood Written by Black Women” aspires to capture, commend, and critique sitcoms centering Black womanhood while emphasizing the diversity, dimensionality, and dignity of the creators and characters. Follow her twitter @neuroticminion.