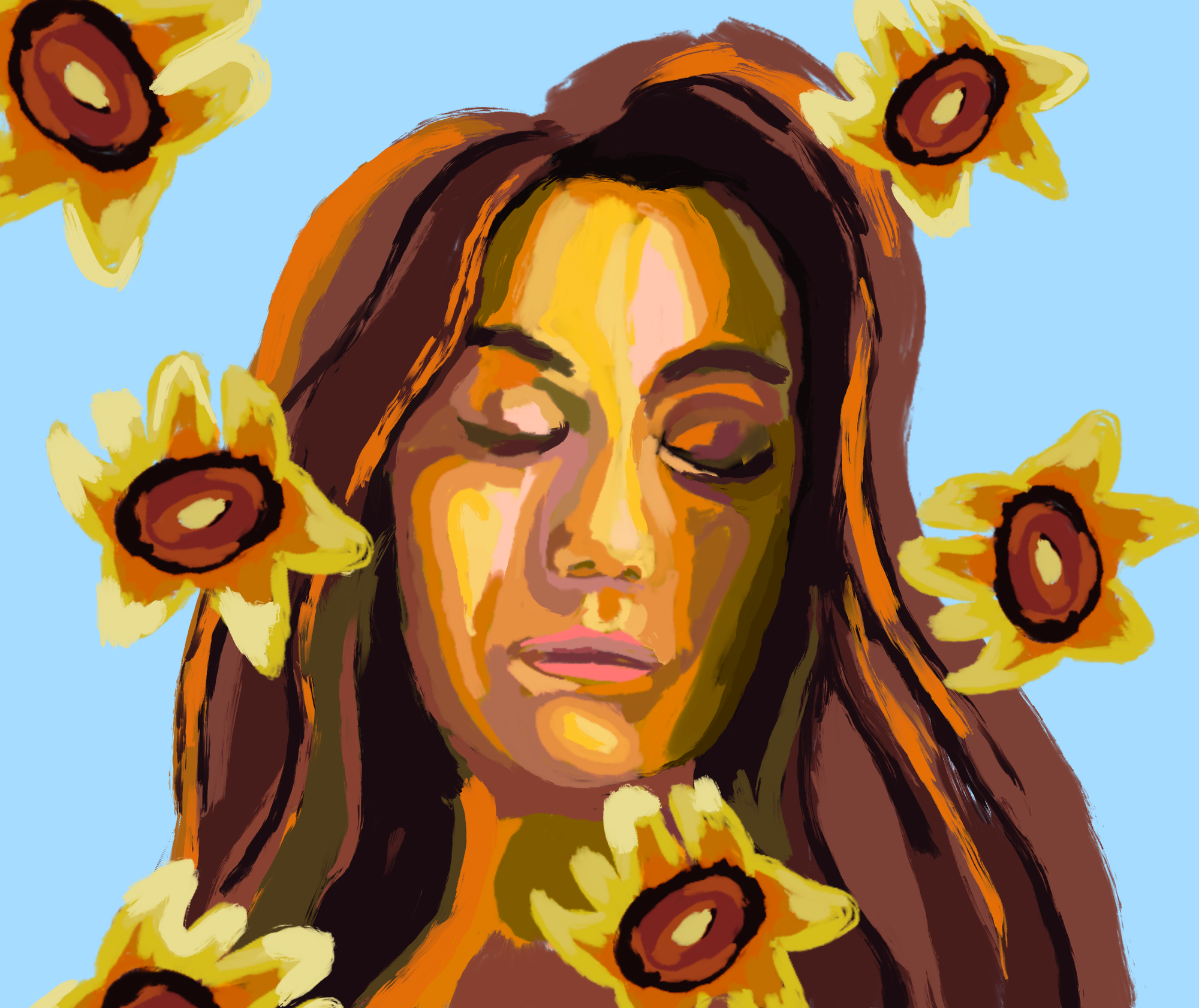 I split my childhood between woodsy creeks in Pennsylvania and the forests of Narnia. The line between where I ended and Lucy Pevensie began was blurry; I cut my hair in her same British bob and used her favorite healing potion on my siblings. I learned how to will myself onto a lion’s back, feeling the soft strands of Aslan’s hair falling through my hands.

When Narnia drifted away with adolescence, I found a teenaged fantasy world just as enchanting: the world of Dodie Clark. I crawled inside her songs with the same abandon, living in her universe of yellow flowers and smeared makeup and sunshine the next morning. But this time, I devoured more than just the words themselves. I devoured her life — the people she was friends with, her favorite playlists, the way she put little eyeliner dots under her eyes.

She didn’t make it hard. Most of Dodie’s early fans found her through YouTube, where she’d post vlogs on everything from messy bun tutorials to her first girl crush. In almost every video, she was sitting in a perfectly-lit room, surrounded by fairy lights, with a carefully-applied face of makeup and a lilting, syncopated voice.

A few videos, however, departed from her usual brand. These were bracingly, unusually vulnerable — devoid of good lighting or eyeliner or a carefully-prepared script. Dodie’s music has always touched on her experience of living with mental illness, but in these particular vlogs, she pulled back the curtain with no filter, no rhyme scheme, no soundtrack. In one video from 2016 called “pasta is good life is SAD,” she’s drunk and cooking pasta in her kitchen while talking about the difference between heartbreak and depression. After having her heart broken, she says she kept waiting for her depression to come back, bracing for the heaviness and suicidal thoughts she had come to expect. But instead, life was “dealable.” It was a heavy conversation, punctuated by a pasta pot almost boiling over and an occasional alcohol-induced sentence that made no sense.

Her fans were obsessed. “pasta is good life is SAD” now has almost 1.2 million views. Viewers flooded the comments section to share similar experiences, talking about coming out of a dark place or accidentally dousing their stove with pasta water. Someone even wrote her an original song in response. In a similar 2017 video called “I am depressed today,” Dodie eats snow peas on her living room floor while she talks about accepting the fact that there are days she will wake up depressed. Underneath it, one commenter wrote: “Fun fact: every time I watch this, I pull out some frozen veggies and eat with you.”

In another deeply personal video, Dodie read a series of texts she’d written to friends trying to describe a feeling she didn’t have words for at that point. “I had this uncomfortable sense of floating,” she says. “Not taking in as much as I used to, not being able to see properly, my memory being really bad.” I slowly realized I knew what she was talking about. The recurring feelings I’d been struggling with — of being frozen in and cut off from my body, unable to shake myself fully awake or remember where I was — had a name. Dissociation. It was a relief to know that someone else knew how I felt. But on the other hand, I still didn’t have a way to turn it off. Neither did she.

So instead of problem-solving, I just kept watching. I listened to her explain her diagnoses of Derealization and Depersonalization, watched her try therapy and medication and Transcranial Magnetic Stimulation. I knew the names of all of her best friends and her favorite kind of vegan mac and cheese.

On the one hand, I’m grateful that she shared so much with her followers; I was able to watch the life and hope and passion seep back into her as her mental health improved. But in many ways, disappearing into her words and favorite colors and way of seeing the world only made my own dissociation worse. After all, the dissociative episodes I was so scared of came from the same desire for escapism that had pulled me deep into someone else’s life in the first place.

Thanking a celebrity for “saving your life” seems to be increasingly normal nowadays, especially among Gen Z. Ironically, I think I see this sentiment directed most often not at doctors or psychiatrists, but at artists: people who express the same feeling a fan is struggling with, even if they don’t know how to fix it. This makes sense to a point; I think the pain we don’t know how to talk about, the things that shame and overwhelm and isolate us from those we love, can sometimes be the most dangerous. But there is an inherent imbalance to relationships between fans and artists. For artists, being someone’s self-proclaimed savior is an enormous pressure. What happens when your mental health recovery is not linear and you screw up in front of the eyes of a million young fans? For fans, there’s a danger that these celebrity saviors can become a substitute for real-life support. Sometimes, it’s far easier to share the things you’re most scared of with strangers on the Internet than with the loved ones right next to you.

For years, I never talked to anyone about struggling with dissociation. If it weren’t for Dodie’s videos, maybe I wouldn’t have had the language to understand what was going on, or the self-compassion to recognize that I wasn’t crazy and that this was just a flawed, healable coping mechanism. But I also think the Internet allowed me to “get by'' without really having to do the hard work of healing — of opening up, of asking for help, of fighting to get better.

A few years ago, Dodie deleted most of her videos about mental health. In explaining the decision, she talked about the one-sided experience of being the particular kind of “It Gets Better” celebrity that sings and writes about mental health for a young and vulnerable audience (think Demi Lovato or Twenty One Pilots). “All I want is to be understood, so I pour it out to the world, and I don’t get that back,” she explained in an interview with the Los Angeles Review of Books.

Arguably, Dodie gained a following through her songs’ delicate poetry and her online vulnerability in equal turn. Would she be releasing a debut album next month if she didn’t upload “pasta is good life is SAD” five years ago? Has the vulnerability she’s shared with her fans always been a safe thing for them, or for her? It’s hard to say.

This year, Dodie decided to put her darker videos back online. “Pasta is good life is SAD” isn’t searchable on the internet or Youtube anymore, but it’s tucked within a playlist on her personal account for her old fans. She still vlogs, but she doesn’t make those same kinds of videos anymore — no on-camera mental breakdowns or no-holds-barred vulnerability. As she put it to The Big Issue: “So many of [fans’] messages tell me, you’re the only person in my life who gets me, you’re the only one who understands. But as much as I would love to, I cannot hug a million people. So I always tell them to reach out to people who know them and really love them.” It’s good advice.

One of my favorite Dodie songs is “Ready Now.” Eight echoey copies of her voice hum behind her as she chronicles the euphoria of real, solid friendship, and the moment when you realize you’ve found a person who feels truly safe. “You saw through me all this time / I'd forgotten people are kind,” she sings. “I believe you, I'm not wrong / Oh, it suits me to feel strong.” I’ll never forget the person who first believed me, the way she left me with strength and understanding deeper and more real than a hundred Youtube videos.

When I listen to that song now, I think back to the girl who became obsessed with Dodie five years ago, to the kid on a tire swing trying to find her way to Narnia. I wish I could reach back and tell her that there will be moments when life is overwhelming. There will be moments when imagination has to be enough. But eventually you’ll be ready to come back to the real world and stay there: to turn off the TV and the music and the thousand distractions, and look in the eyes of the people you love. To tell them you are glad to be here — solid and imperfect and real and alive.