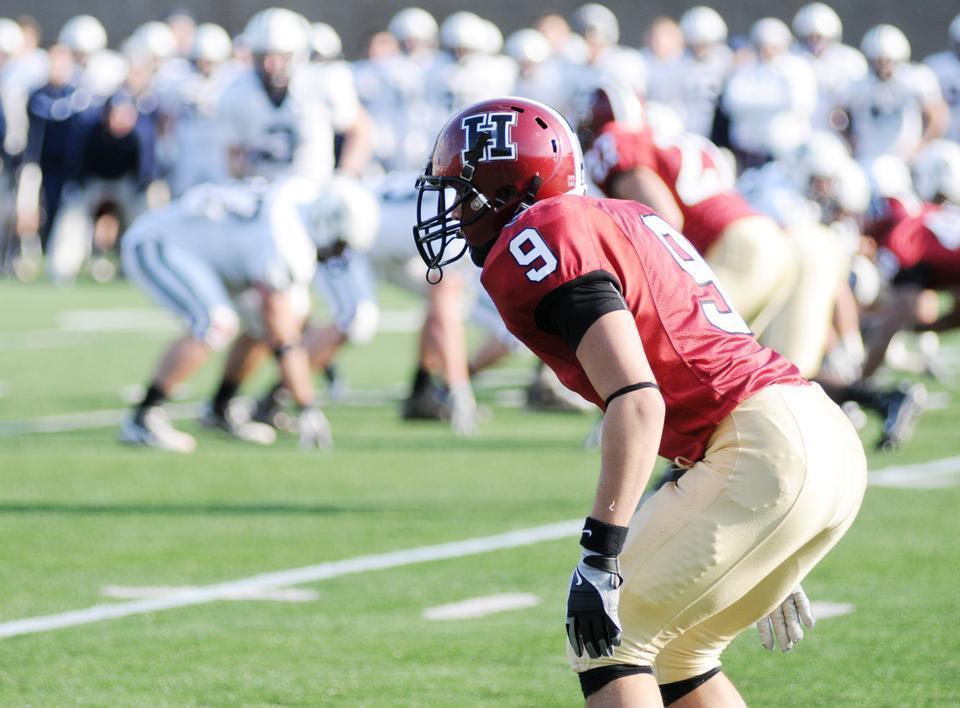 Junior defensive back Dan Minamide prepares for a play during Saturday's game against Yale.

We all enjoyed being away from Harvard for a bit for the 130th playing of The Game—but unlike our peers at Yale, we Harvard students have class to come back to on Monday. Flyby came up with a list of just a few of the many things we’d rather do than sit in a Monday section after The Game.

1. Repeat freshman week.
Let’s face it: that opening week before classes officially started, back when we knew absolutely no one and our proctors and PAFs held our hands, was full of the most awkward experiences we’ve ever had at Harvard. You may have lost your ID, gotten locked out of your room, forgotten the names of everyone in your entryway, or been turned away from the First Chance Dance, but regardless, repeating freshman week would certainly be preferable to coming back to Cambridge after a weekend full of festivities at Yale.

2. Spend your entire night at one final club party.
Self-explanatory. It may seem like an unthinkable horror, but we at Flyby would be willing to take one for the team in order to avoid next week’s dreaded two days of classes.

3. Live on HUDS froyo until Thanksgiving.
To some this may sound like an inviting prospect, but don’t be fooled; eating nothing but this dhall staple for a couple days would definitely present a daunting challenge. At least we’d get to celebrate with delicious T-day treats after, right?

4. Live in the Quad.
Three years of making the dreaded trek to the Yard for class or being crammed into an overcrowded shuttle would be worth it, if only we could skip right to break. Housing gods, do you guys take requests?

5. Throw The Game and let Yale win.
A step too far? Okay, okay, we thought so. As much as an extended vacation would be great, our egos could never handle seeing those bothersome Bulldogs walk away victorious. Besides, with a six-year streak under our belt going into it, we really couldn’t have lost this game if we tried.