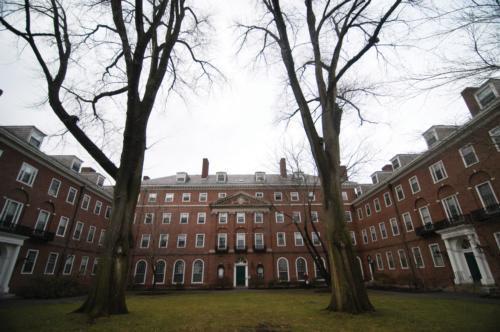 Built in 1914 as freshman dormitories, Standish and Gore Halls were later united to form Winthrop House. In the years since its inception, Winthrop has certainly accumulated its fair share of famous alums, from J. Robert Oppenheimer '26 to Barnett "Barney" Frank '61-'62, and plenty of Kennedys to boot. Situated less than five minutes from the Yard and directly facing the Charles River, Winthrop is one of the best-located Houses, and residents are pretty much guaranteed an incredible view from their bedrooms at least one year of their three-year stay. Though the rooms themselves may not be the best, Winthrop's architecture is, at the very least, nice to look at from the outside.

House Spirit: Winthrop's IM domination in recent years suggests a pretty tightly knit House community. The Lions have won the Straus Cup for the past five years running, and are going for their sixth. And they're not kidding around, as evidenced by the recent creation of a Winthrop IMs Twitter account to keep people up to date on upcoming competitions and past results. For the less athletically inclined, Winthrop's House spirit isn't the strongest on campus, but the HoCo always encourages residents to come along to their weekly meetings in the JCR. Winthrop's annual spring carnival, "Thropstock," brings Winthrop students together with blow-up rides, a picnic, and live music to enjoy.

Housing Quality: Winthrop has a notoriously bad reputation for its housing, which, for sophomore and even junior suites, is well deserved. Not only does Winthrop lack n+1 housing, the bedrooms in n suites tend to be on the smaller side, forcing many students to relive the dreaded bunk bed days of freshman year. Some residents also complain about thin walls, but hey, you'll definitely know your neighbors well by the end of the year… and maybe someone's boyfriend or girlfriend, too. Once you finally reach the hallowed days of the senior suite, Winthrop's housing really isn't so bad, and they have some pretty great rooms that boast balconies with river views.

Dining Hall: Though the words "dark and dungeon-like" have been thrown around to describe Winthrop's dining hall, we tend to think of the Slytherin-like dark walls and monochrome floors as part of the House's charm. Winthrop's dining hall is one of the quieter culinary locales on the river, which means you're more likely to bump into and be able to socialize with other Winthropians, and won't have to scream to have a conversation with your friends over dinner. While some complain that the servery is laid out counter-intuitively, everyone raves about Winthrop's friendly HUDS staff.

Facilities: Winthrop boasts a beautiful library that is home to some very valuable art. When residents want to take a break from studying to relax, the courtyards have a tire swing, a hammock, and outdoor seating that make spending sunny days at the House a pleasure. Though there aren't a ton of common spaces indoors for when the weather gets colder, students can take advantage of both the Junior Common Room and the Senior Common Room, both of which fit in with Winthrop's classically-Harvard vibe.

House Masters: House Masters Ronald S. Sullivan Jr. and Stephanie Robinson, though not quite as hands-on as other House's masters, are approachable and relate well to college students. Residents say they don't spend much time in the dining hall themselves, but their adorable sons Trey and Chase can often be seen running around during meal times. And Masters' Desserts, which were previously catered by now former-Masters' Aide and Cordon Bleu-trained chef, Paulo Cesar Guede, have a reputation for being delicious.

Extra: Winthrop boasts some pretty unique and exciting events, from an annual game of assassins to the brand new Perini-Woods Memorial Senior Common Room Series, which allows students to listen to talks from notable guests. (Last year's inaugural Perini-Woods address came from Joseph P. Kennedy III.) Residents who live in F-entryway get to spend Presidents' Day evening having a celebration in JFK's old suite, which for the rest of the year is lent to some of Harvard's most distinguished guests. Kennedys aside, Winthrop offers some great class-specific events, including Mini Golf in Gore Courtyard for juniors and wine tastings, a masquerade ball, and Casino Night for seniors.

Disclaimer: Flyby's 2013 House Rankings, though unscientific, are based on careful research and review by the Flyby Staff. We encourage you to read the full posts—rather than the rankings alone—to learn more about each House. As difficult as it makes our jobs, there is good to be found in every one of the twelve.

An earlier version of this post incorrectly stated that Masters' Desserts in Winthrop are catered by Masters' Aide Paulo Cesar Guede. In fact, Guede no longer works in Winthrop.