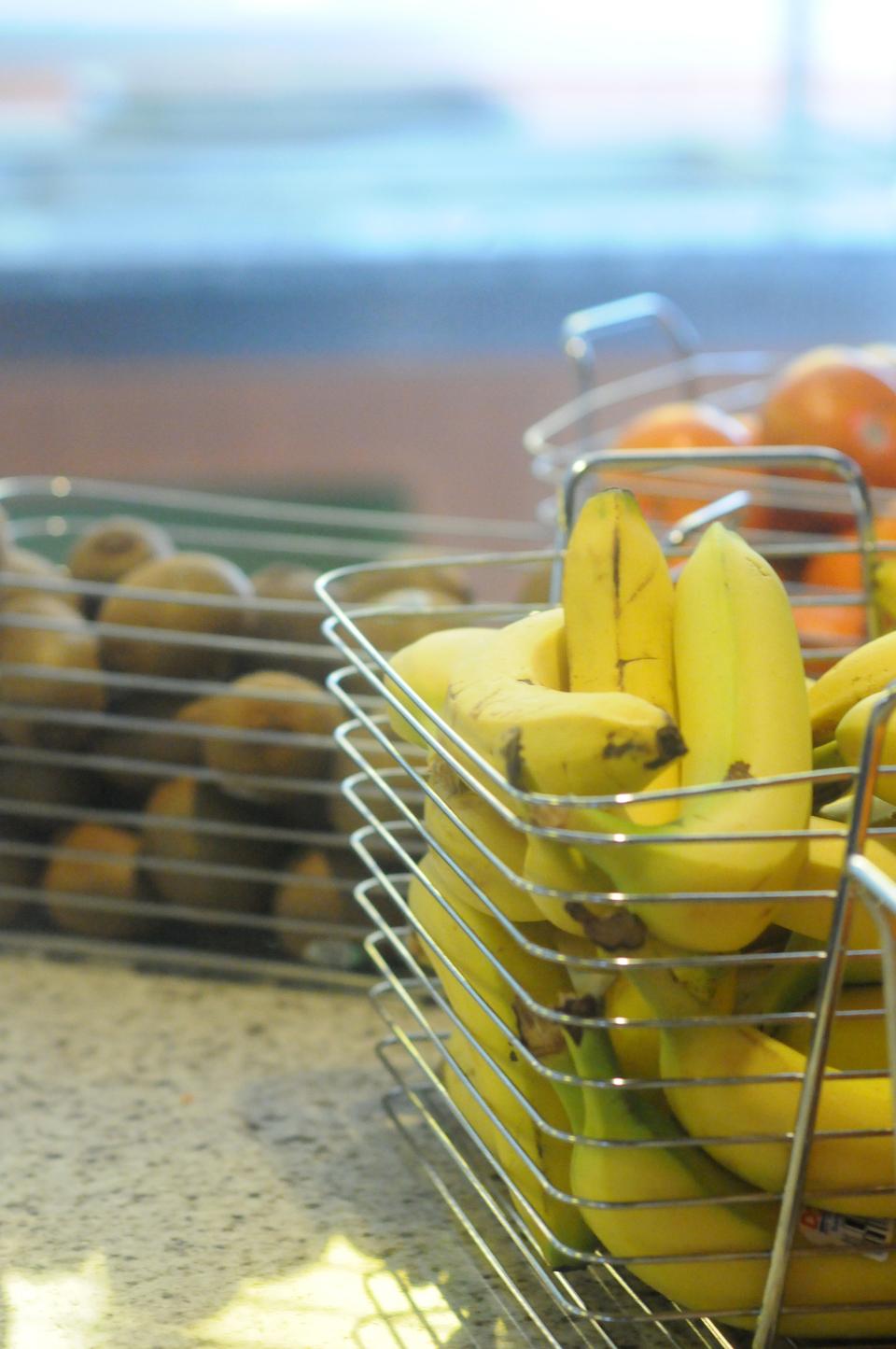 Making HUDS food edible takes work and creativity. Luckily, the Cabot and Quincy Food Literacy Projects are coming out with a cookbook to help you turn gelatinous sludge into tasty delights!

THE CHALLENGE: Go vegan for a week (Monday-Friday only—denying ourselves Annenberg brunch was not an option)

My parents read our last column as a cry for help. When they came up for a visit last Sunday, they brought along two dozen New York bagels. This proved to be a godsend—pieces torn off of these constituted close to half of my diet over the course of the week. Veganism is all about greens, but I have to admit I ate a lot of beige.

Monday: My first meal as a vegan (Annenberg breakfast) introduced me to my first vegan irony. The card pinned up above the pancake syrup proudly declared: vegan. But pancakes? Not so much. I settled for some Apple Zings with soymilk. But a tightening sensation in my throat quickly confirmed that I had not, in fact, conquered my bothersome soymilk allergy (I want to make clear, as a tofu lover, that I am allergic to soymilk, not soy: apparently when soy is cooked, it kills whatever enzyme in soy my body finds objectionable). Half a bagel from my bag-o-bread sufficed for lunch. For dinner I paid a visit to OSUSHI. Despite my dinner companions' assertions to the contrary, I was quite satisfied with the vegetable roll, thank you very much! So satisfied, in fact, that when I started to feel hungry again at around midnight, I picked up a seaweed and cucumber roll at the 24-hour market. Restaurant quality? Very nearly! While I paid, my friend waited for the three Boar's Head sandwiches our study buddies had requested. I averted my eyes.

Tuesday: Another day, another vegan irony. I was pretty excited when a mid-lecture peek at the HUDS website informed me that there would be falafels at lunch. But the label affixed to the tahini dressing I'd hoped to drown my pita in delivered a disappointing revelation: Tahini Dressing—Vegetarian. By the time I learned that this was probably a mistake, I'd long since consumed my distinctly dry falafel sandwich. A Chipotle rice bowl for dinner lifted my spirits. But finding myself hungry late at night, once again, I capped off my second day of veganism with a feast of grapes and granola.

Wednesday: Faced with the prospect of yet another black Americano, I convinced myself that I wasn't so allergic to soymilk. Bad call. I spent the two hours after class I'd budgeted for homework feeling far too nauseous to ponder the vagaries of semantic shifts. Later, at Café Pamplona, I sat (appropriately) green with envy as my friends sampled beef empanadas and flan. I sought comfort with the half a container of granola I had stowed away in Grays.

Thursday: Vaguely repulsed by the notion of yet another bowl of assorted vegan cereals (no Marshmallow Mateys, no Cracklin' Oat Bran, no Honey Nut Scooters), I sampled all the different kinds of bread Annenberg has to offer. The marble slice disappointed, but the raisin bread delivered. For my second HUDS meal of the day, I put together a salad that incorporated close to 100 percent of the salad bar offerings. Later, I met real-life vegan (and Crimson Editorial Chair) Marina Bolotnikova for coffee at everyone's favorite "food lab," Clover. Marina became a vegetarian in middle school, and decided to go vegan around the beginning of high school as she learned more about what she calls "animal agriculture." Marina is extremely passionate about veganism, and believes it to be "the way of the future."

Friday: I preceded back-to-back midterms with a super-long breakfast. A vegan-cereal aficionado by this point, I piled Apple Zings, Corn Pops, and Raisin Bran into a bowl without so much as a backward glance at the HUDS labels. I skipped lunch, but by the time I headed to a celebratory Last Vegan Supper at Veggie Planet, I'd polished off all of the granola in a container large enough to be labeled a tub. The roasted vegetables and rice platter I ordered at Veggie Planet were delicious, but I made sure to save room. Within fifteen minutes of midnight I was sinking my teeth into a Tasty Burger (pickles, onions, tomatoes, mustard, ketchup, hold the cheese).

The last time I tried going vegetarian, I held out for all of an hour. Blame my environment; in Texas, eating meat is just short of mandatory. In the summer, I would have the trifecta; pork for breakfast, chicken for lunch, and beef for dinner. So when Emma suggested that we try going vegan for a week, I nearly had a heart attack. And no, not because my arteries were clogged.

Monday: I woke up feeling refreshed and eager to try something new for the week. However, instead of trying  to be creative with my limited options in the dining hall, I opted for a trustworthy system I developed to rely on whenever I was unsure if something qualified as vegan or not: when in doubt, have a peanut butter sandwich. I then survived the first day of the vegan challenge by eating only peanut butter sandwiches, just to play it safe.

Tuesday: I must admit; Tuesday was my downfall. After facing the prospect of tackling both an Expos paper and studying for an economics midterm in one night, I turned to the only source of comfort I knew: pizza. It was over before I knew it; the joy I felt as I feverishly wolfed down three slices of gooey Domino's pizza was only fleeting compared to the immediate guilt I felt for betraying my promise to Emma (I eventually confessed and she took it in stride. God bless Emma Adler.) At least I held out for longer than an hour this time.

Wednesday: I had skipped breakfast and lunch to cram for my test before I headed to Annenberg to enjoy a nice salad. However, as I attempted to pour ranch dressing onto my salad, my friend swatted my hand away and told me that ranch was in fact not vegan and had buttermilk. Feeling sheepish (and very hungry), I spent dinner that night eating a banana and watching my friend drown her bowl in my favorite dressing.

Thursday: Lunch marked the twentieth time I Googled, "Is __ vegan?" before eating a particular item, which in this case was French fries. Obviously, unless they were fried in animal fats or oils, I was safe. I decided to give the delicious golden potato wedges the benefit of the doubt since I had been eating the same things for the past four days and wanted some more color on my palate. Luckily, my indulgence ended up causing no harm as the HUDS website, which I checked later that night, confirmed that the fries were indeed vegan. I also wish I had consulted the HUDS website more often during the week since it conveniently lists "VGN" next to all the vegan options on the menu for the day. Maybe then I wouldn’t have gotten tired of eating peanut butter, which is something I never imagined could actually happen. I grew up eating PB&J sandwiches everyday, but I guess there is always a breaking point.

Friday: In the midst of midterms and a cold that just never seemed to leave my body, going vegan for a week was probably not the best choice. I finished the challenge with none other than a perfectly crafted peanut butter sandwich and a milk-less bowl of Cinnamon Toasters. I must admit that I drooled a little more than necessary before indulging in some late-night Cheez-Its as soon as the clock struck midnight.

We could understand the appeal of a plant-based diet: there's no denying that going vegan forces you to cut out a lot of unhealthy foods. Unless we were just imagining it all in our heads, our pants seemed to fit a bit looser on us. We also admired and appreciated the environmental and moral implications of going vegan. Trying something new for a week was fun and fulfilling for the both of us. However, we probably won't be continuing this diet in the long run. We are, after all, foodies at heart, and we simply missed our favorite dishes too much.

Tags
On CampusStudent LifeFood and DrinkHUDSEnvironment