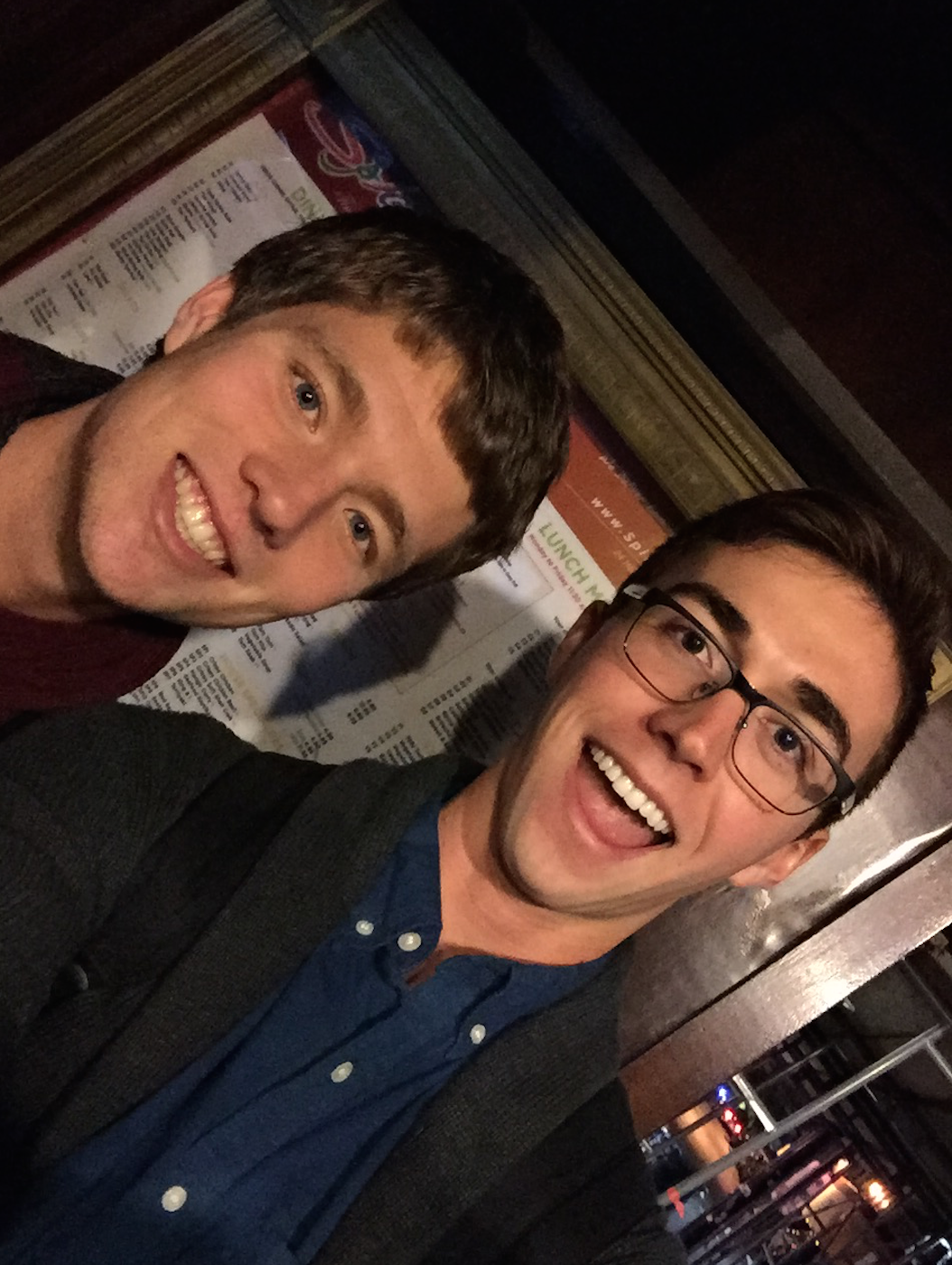 Thomas (left) and Michael (right) pose with the Spice menu as a lovely backdrop.

Michael A. Kikukawa ‘17 lives in Lowell and thinks dating in college should be “fun without being overwhelming.” Thomas G. Dumbach ‘18 lives in Kirkland and says he “loves the institution of casual dating and would love for it to make a comeback.” Thomas is in search of someone with a “shameless love of food” and an “understated sense of humor” that dresses well (but isn’t a jerk about it). Michael is looking for someone who has a sense of humor and a passion for something. Did they find these traits in each other over dinner at Spice (paid for by The Crimson)?

Thomas: We both arrived at the door at the same time. We quickly realized [who each other were]. We just knew. We just looked and were like, "Hi."

Michael: It was meant to be.

Thomas: [My reaction to seeing him] was positive.

Thomas: It was none of the terrible scenarios I had imagined. I had imagined that it would be either someone who, for one reason or another, I just didn’t click with at all or someone I had already hooked up with…it was neither of those things. There are so many people who don’t fit either of those categories, but I was convinced it would just be a nightmare... it wasn’t in spite of my dread.

Michael: [I had] three worries. The first one is I’ve hooked up with this person before and this is going to be the awkward-est thirty minutes of my life. Second is that this person hates me or I hate this person, and the third is that neither finds each other attractive… it was none of those three… I was relieved. He was cute, so it was fun.

Thomas: I ordered the pad ginger and scallion noodles with chicken… He wanted to get basic pad thai, but I was like, "Really, come on." I shamed him into getting a step above.

Michael: I ordered the basic pad thai, but I got it spicy.

Thomas: We talked a good deal about um… wine preferences? He’s mostly white and I’m mostly red except occasionally over the summer when I digress.

Thomas: I learned that he was Beyoncé for Halloween.

Michael: [I learned that] he’s taking four classes this semester, which is so normal, but three of them are Latin and Greek and not even Modern Greek, like ancient Greek, and I’m like you are literally the person at Harvard who is more unemployable than me.

Thomas: We talked about the normal things that aren’t particularly memorable but are filler…there was flirting.

Michael: We weren’t [Facebook friends before]. I added him at some point and then very slyly got his number.

Thomas: It was accidental [that he got my number through a group chat with a mutual friend, but] I’ll give him that it was pretty sly.

Thomas: I was going to my room [the next night] to watch Gilmore Girls and he [texted] "What are you up to?"

Michael: We saw an episode of Gilmore Girls the next night. It was fun.

Thomas: The future of the relationship… might be best summarized by a Drake song? Hotline Bling…Relationship is to be determined.

Michael: I think that it was fun to get to know someone else. I think a lot of times we get stuck in these sort of circles at Harvard which is great because you have a network of friends and people you can rely on but you forget that there are one thousand other people there that you’ve never met, never talked to… It was helpful that we had friends in common, but that’s true of anyone at Harvard… plus, it’s nice to go on a date. It’s exciting. You get nervous.

Thomas: Hundo P [would recommend going on a Flyby date] mostly because of the free food and also the opportunity for aftermath. Honestly I’d go on so many Flyby dates… can we do a series on me?

No Thomas, we can’t do a series on you because we have a growing list of people who have already applied to go on a Flyby Matchmaker date. Want to join them? Fill out this form and you could have as much fun as Thomas and Michael did.