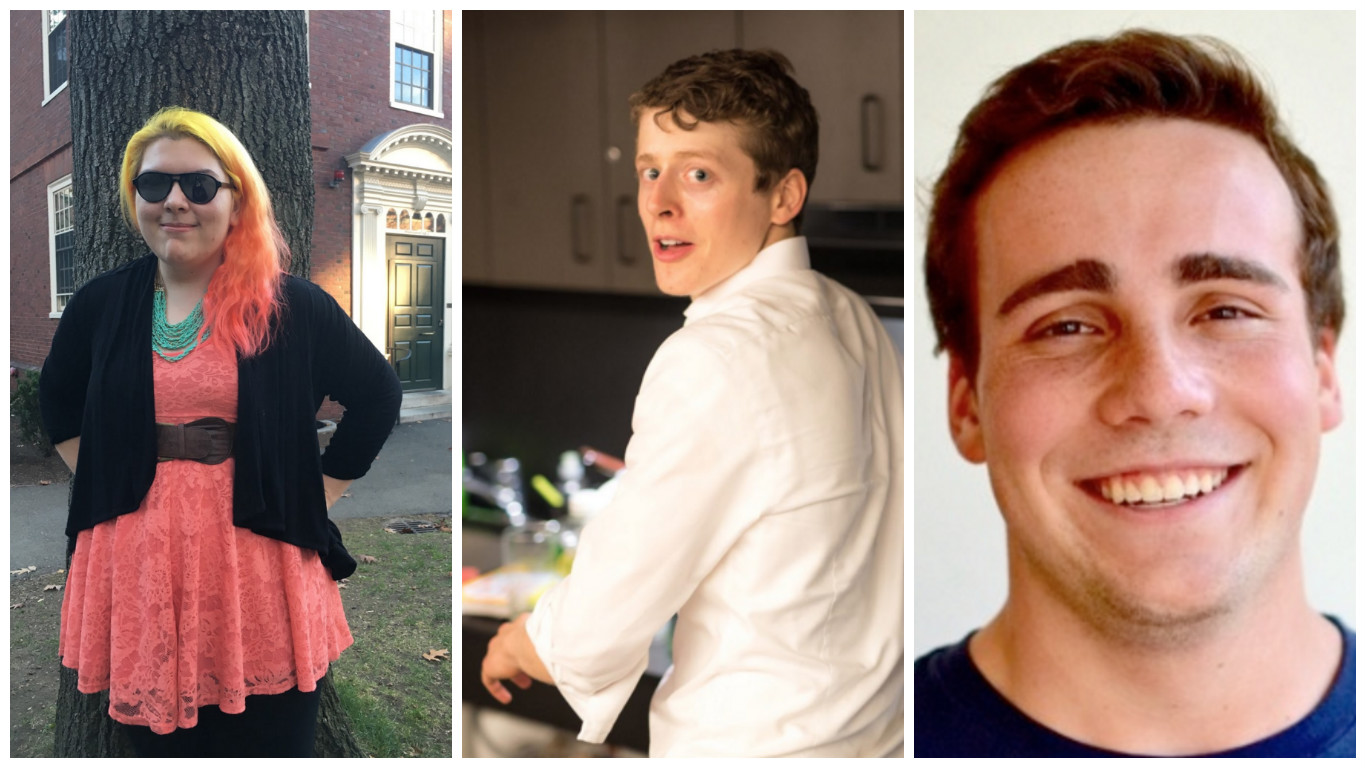 Flyby: Do you still post on the page? And if so, how much?

GDA: Not at all really, not unless I’m advertising for a job.

WR: Yes, I still post on the page a moderate amount. I think what made me Facebook famous, to use that term, last year was because I was on the First Year Social Committee and the UC, so I was posting a lot, just telling people what was happening, what was affecting their lives. Now I’m still on the UC and the College Events Board, so I’m still doing a lot of posting about events that are happening and how to make [people’s] lives more happy at Harvard. It really hasn't changed that much.

SAT: Not too often. I think there’s a tendency for people to live vicariously through the page. You're super excited about going to a new school; you want to show how excited you are; you want to meet new people— really the only outlet is the Facebook page and now, that’s not as much the case. I really just enjoy shouting in the dining halls now. I feel like that’s much more impactful.

Flyby: Are you sad that your class page has died down?

GA: Yeah, I am really sad. I really think that the Class of 2017 is great and they were always great to talk to, but I feel like everyone is kind of in their own little social group now and they don’t really see the need for using the 2017 page for anything but advertising.

SAT: Yeah I think so. I think that all my social capital is now gone. I am very lonely and desperate for social connection now.

Flyby: Would you say that your reputation on the page reflected yourself in real life?

GDA: On Facebook, I’m a lot nicer than I am in person. I guess more extroverted too. One of my roommates said, "I didn't trust you at first because on the Facebook page you were so nice. I don’t trust people who are nice.” I mean, I’m nice but I also have a sarcastic side too.

SAT: I talked about how I got rejected from dates because I was a quasi-vegetarian. One of my applications for a seminar on eating healthy was on how that really limited my love life. And I still think that’s true—so yeah, it’s very representative.

Flyby: How have you changed since becoming Facebook famous?

GDA: It actually kind of made me reflect on my life choices. Last year I actually deactivated my Facebook for the academic year. I purged myself of it and it was really good. Now I’m back on, but I don’t post every day like I used to.

SAT: I think that I have developed rippling abs, type O blood, and 3% body fat. I’m also a Gemini now.

Flyby: How did your life change after Flyby published an article about you?

GDA: A lot of people used it to poke fun of me, “Oh you're famous now,” and I’m like, “Stop.” But besides that I've gotten a lot busier. I work a lot more and don’t have as much time for Facebook stuff as I used to. Also, I feel like I've acclimated a lot more. I love my house, which is Eliot, and I've gotten to know a lot of the people so I feel like I have more of a social life outside of social media. I think that’s good. It’s good to have a balance because a lot of people are down on social media and they're like, “Oh, you don’t see people face to face,” but I don’t think that that’s always necessarily a bad thing. It’s about finding the right balance and I think I have.

WR: I have started to be the designated person to post in the page for events. But no I don’t think I've changed that much. I’ve definitely been the butt of some jokes, but I think that’s about it. I think I’m the first person to laugh at myself about those kinds of things, so I don’t think my life has changed significantly.

SAT: I went back to being a Scorpio actually after that. One thing that did happen was that I got this email two months into freshman year titled Facebook Celebrities and it was from the dean of Ivy Yard. He had essentially assembled all the Facebook famous people into this meeting with the person who controls the Twitter account of Harvard. It was the most weird meeting ever; it was like just 4 kids giving suggestions on what to tweet about. It was bizarre.

Flyby: Do people still bring it up?

GDA: Not really. When you emailed me, I actually screenshotted the email and put it on my Facebook like, “Why is my fame haunting me?” Someone who's not even in my class was like, “Was it fun when you were a Facebook celebrity on the Class of 2017 page?" and I’m like, “How do you know this?” But besides that, no. If I don’t bring it up, no one else really does.

WR: People aren't talking about it that much. At the very least, people don’t make fun of me when I post on the Facebook group because it’s not a huge deal for me to post anymore. There’s that weird unspoken barrier about posting that’s never really been there for me.

SAT: I think sometimes people are like, “Did you post a lot on the class page?” “Is it you with the rippling abs?”

Flyby: Is there anything that you have learned?

WR: Tuesday at 9 p.m. is the ideal time to post. You get a lot of likes from that and it reaches a lot of people. The more you post it almost paradoxically gives you more credibility; not that you’re wasting your posts but that you're consistently informing people of stuff that will genuinely better their lives.

SAT: I think I did become a better short form writer actually. There’s a cadence to Facebook posts.

Oh, and Class of 2019 Facebook celebrities, we're coming for you too.