Conan O'Brien and I are BFFs 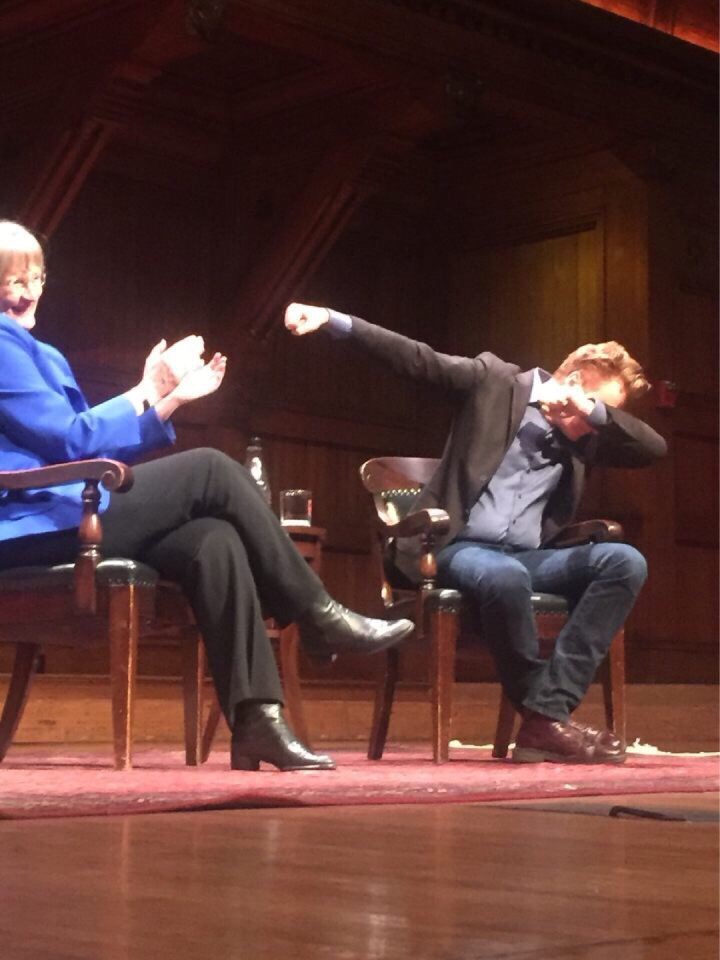 Conan C. O’Brien ’85 and I became friends on Friday. Like, personal, have-slumber-parties-and-swap-secrets friends. We laughed together, we cried together, and we took a selfie together. I swear I kept my cool. (Editor’s note: no, he didn’t).

Coco was in town to speak with University President Drew G. Faust about the importance of a liberal arts education in front of hundreds of students in Sanders Theatre. More importantly, though, he was in town to meet his new best friend: Me.

After a 30 minute discussion with Faust and almost an hour of answering questions from the crowd (he even dabbed at one point), Conan descended to the depths beneath Sanders. I and my fellow very cool student journalist friends/late-night TV show host groupies waited around and eventually, with the helpful guidance of a few Harvard staffers, gathered outside of Conan’s “green room.”

It’s common knowledge that Conan is tall—his Wikipedia page says he’s 6’ 4’’—but I am pretty sure international fame adds a few inches. Once his aides gave us the go ahead, we entered the Coco lair and met the man himself. Immediate impressions: he’s quite tall (did I already say this?), and if you stare at his (magnificent) hair for too long, you will become slightly dizzy. Also, he’s a really nice guy.

After taking some selfies with us, Conan sat down and answered questions for 15 minutes. Here at Flyby, we asked the most hard-hitting of hard-hitting questions: Does he have any tips for us at 14 Plympton for our ongoing prank war against the Lampoon, the semi-secret Sorrento Square social organization that used to occasionally publish a so-called humor magazine? (We are, admittedly, losing this war). Conan was the President of the Lampoon and a notorious prankster during his time here, so we hoped he might be able to trade some secrets with the other side.

Here at Flyby, we’re taking Conan’s advice to heart. Well, maybe except for the explosives thing. But look out, Lampoon.