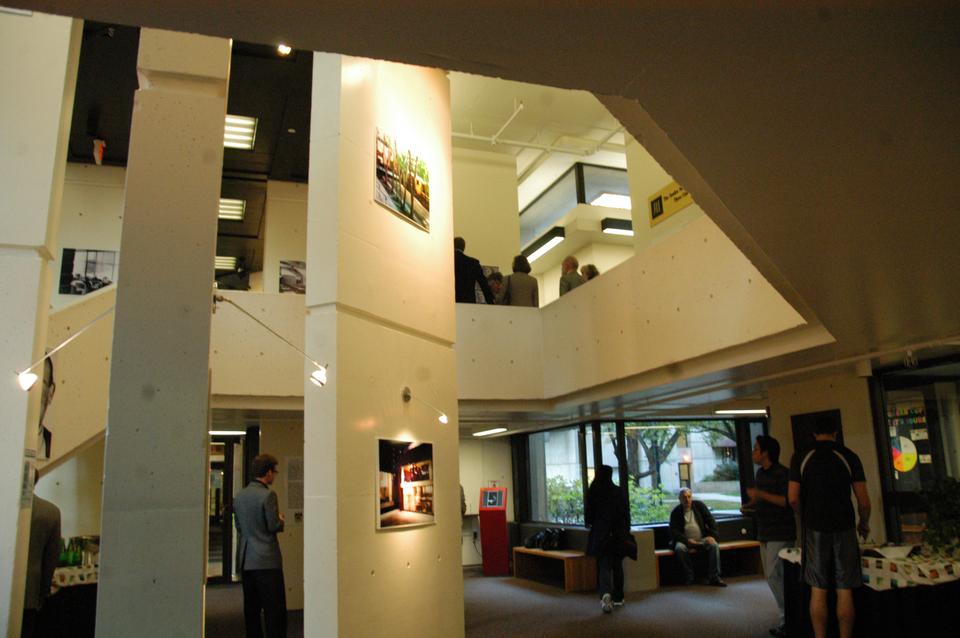 The opening reception of the Creating Mather exhibit in the Three Columns Gallery in Mather House on Tuesday attracts both visitors and students passing by. The exhibition seeks to celebrate the house's creation with pieces reflecting both its design and construction.
By Hana N. Rouse, Crimson Staff Writer

At Tuesday’s reception for the newest exhibit in Mather House’s Three Columns Gallery, the several alumni in attendance agreed that the most striking difference between Mather now and the time when they were undergraduates is the addition of the small amount of greenery in the form of the grass and trees that dot the courtyard.

The exhibit, titled "The Creation of Mather," documents the construction and history of Mather House through a mixture of photographs, artist renderings, blueprints, and articles from The Crimson.

John Christensen, one of the original architects who helped design Mather’s famous tower, attended the reception and spoke at the dinner discussion that followed.

Students used Christensen’s presence as a chance to ask questions about Mather’s unique design. According to the architect, one of the most popular questions asked was whether, given the decade in which Mather was constructed, it was built "to defend against the masses."

"No," he said with a chuckle. "That’s not what academic institutions were built for."

The arrangement of the exhibit is a testament to Mather’s unique architecture. The two-story gallery allows art to be displayed on multiple levels. The current exhibit is arranged with pictures of the old Mather at the bottom and of new Mather at the top of the three columns that give the gallery its name.

Shepley Bullfinch, the architecture firm behind Mather’s design, provided the pictures for exhibit, which was designed and produced by Mather House Masters Christie A. McDonald and Michael D. Rosengarten.

According Hannah M. Cardiel ’13, a member of the Mather House Committee, the House is considering either making the exhibition a permanent fixture or bringing it back during the spring semester.

"This kind of exhibit hits closer to home because it’s your House," Cardiel said. "There’s a sense of ownership."

Both students and administrators said that they thought the exhibit was very successful.

"People here have kind of a funny relationship with the architecture here. Some love it and some hate it," said Mather House resident tutor Celeste Moreno Palmero. "[The exhibit] helps people appreciate it more."

Hafrey was responsible for installing the gallery in the House about a decade ago, after a resident tutor suggested that the space was reminiscent of the Guggenheim Museum in New York.

"You have this really harsh environment and he really wanted it to be embellished. He wanted to have art everywhere," Hafrey said of Jean-Paul Carlhian, the architect for Mather.

The exhibit premiered on October 7 and will remain open through November 7.