Portrait Of An Artist: Sooni Taraporevala 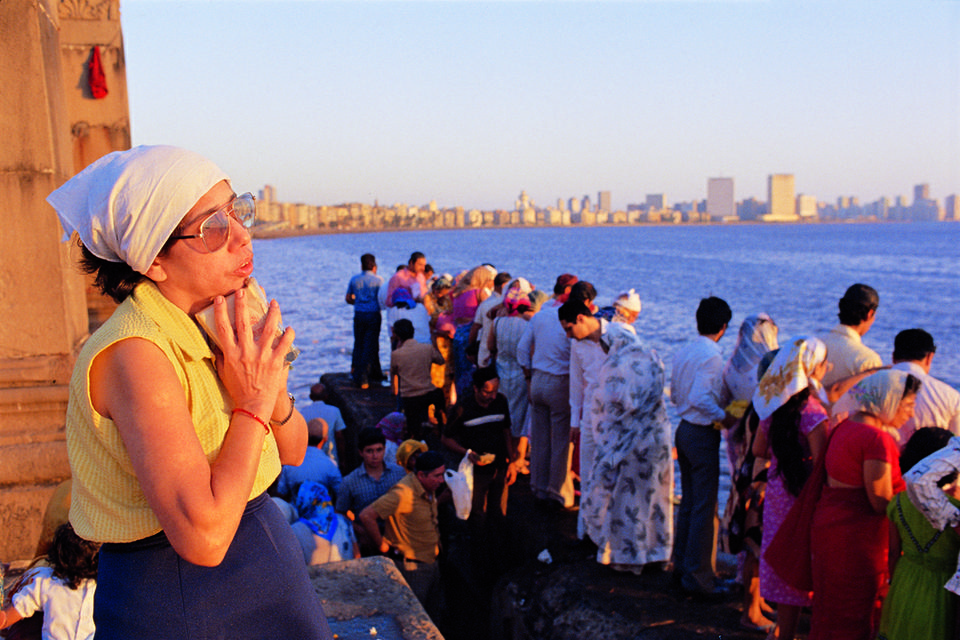 Taraporevala's "The day of prayers to Avan, the water divinity," 1984
By Tree A. Palmedo, Contributing Writer

When Sooni Taraporevala ’79-’80 arrived at Harvard for the first time, art was not high on her agenda. “I came here thinking I would study economics,” she said. “I don’t know why.” Plans changed, and Taraporevala has since established herself as an internationally acclaimed screenwriter, filmmaker, and photographer.

Taraporevala, who is based in Mumbai, has written, among other acclaimed films, the Oscar-nominated “Salaam Bombay!” and an adaptation of Jhumpa Lahiri’s novel “The Namesake,” both of which were directed by Taraporevala’s frequent collaborator Mira Nair ’79. Taraporevala returned to Harvard last week to present two recent works. “Parsis: The Zoroastrians of India” is a photo collection over 30 years in the making that gives an inside look at the Parsi community to which Taraporevala belongs, a group that follows the prophet Zarathustra. Taraporevala’s 2008 film “Little Zizou,” which was screened at the Harvard Film Archive on Saturday, also depicts the Parsis of Mumbai and is Taraporevala’s first film as both director and writer. “Parsis,” which was originally published as a book in 2000, will be on display in the Carpenter Center’s Sert Gallery through December 20.

The Harvard Crimson: Why did you start documenting Parsi life, and when did you decide this was an undertaking that should be presented in a book?

Sooni Taraporevala: When I took time off [from college] and I went home, I took a lot of pictures of my family, and every time I’d go home I’d do that because I grew up in a very large extended family and there was an entire generation I wanted to document. And in ’82 I met [photographer] Raghubir Singh, and he looked at all my work and he suggested I do a book on Parsis, because it had never been done before and I had kind of unique access. So that’s when I consciously started working on it as a body of work—I had been photographing Parsis before that, but much more ad hoc and in a much more personal way.

THC: Why did you feel “Little Zizou” was a story over which you wanted to have a director’s extra control, rather than just screenwriting?

THC: What was it like transitioning from screenwriting alone to writing and directing?

ST: It’s like I’ve tasted blood.... I feel that every screenwriter should have the opportunity to direct one film and every director should write one film so you really know what its like on the other side, because until you do it, it’s kind of hypothetical. It’s only when you’re really doing it that you understand what it’s like to be in that position.... It’s nice to direct; because I had written the script, I was very easy with changing it as it needed to be changed. But every night I would go home and see what we had shot and try to see the big picture, because it’s very easy to lose yourself once you start changing things.

THC: Are there any moments captured in the “Parsis” collection of which you are particularly proud?

ST: I’ve got a lot of people who’ve since passed away, and I’ve had a lot of people who come up to me and say, “That’s my grandfather,” or, “That’s so-and-so.” And often I don’t know who it is, because if it’s a person on the street, I haven’t stopped to talk to them. For instance, I took a picture of two people at the race course and I had no idea who they were, and then I later found out. Basically, I’m happy that I photographed a lot of people before they died.

THC: How did your time at Harvard influence your artistic paths?

ST: I met Mira Nair my sophomore year here...and I took [Osgood Hooker Professor of Visual Arts] Alfred Guzzetti’s filmmaking course, which has stayed with me, actually…. We [students of Guzzetti’s] had to take turns filming each other, and when it was my turn to be filmed, I tried to do a comedy act, and I started out with that, and then midway through it I thought, “I sound completely ridiculous and all that’s on film!” When the film screened in class I was cringing because it was totally embarrassing, but Alfred thought it was an honest moment. And it was the first time that I considered the possibility of honesty on screen being as valuable as performance or virtuosity.