The Dean of the College: Leading with Limits 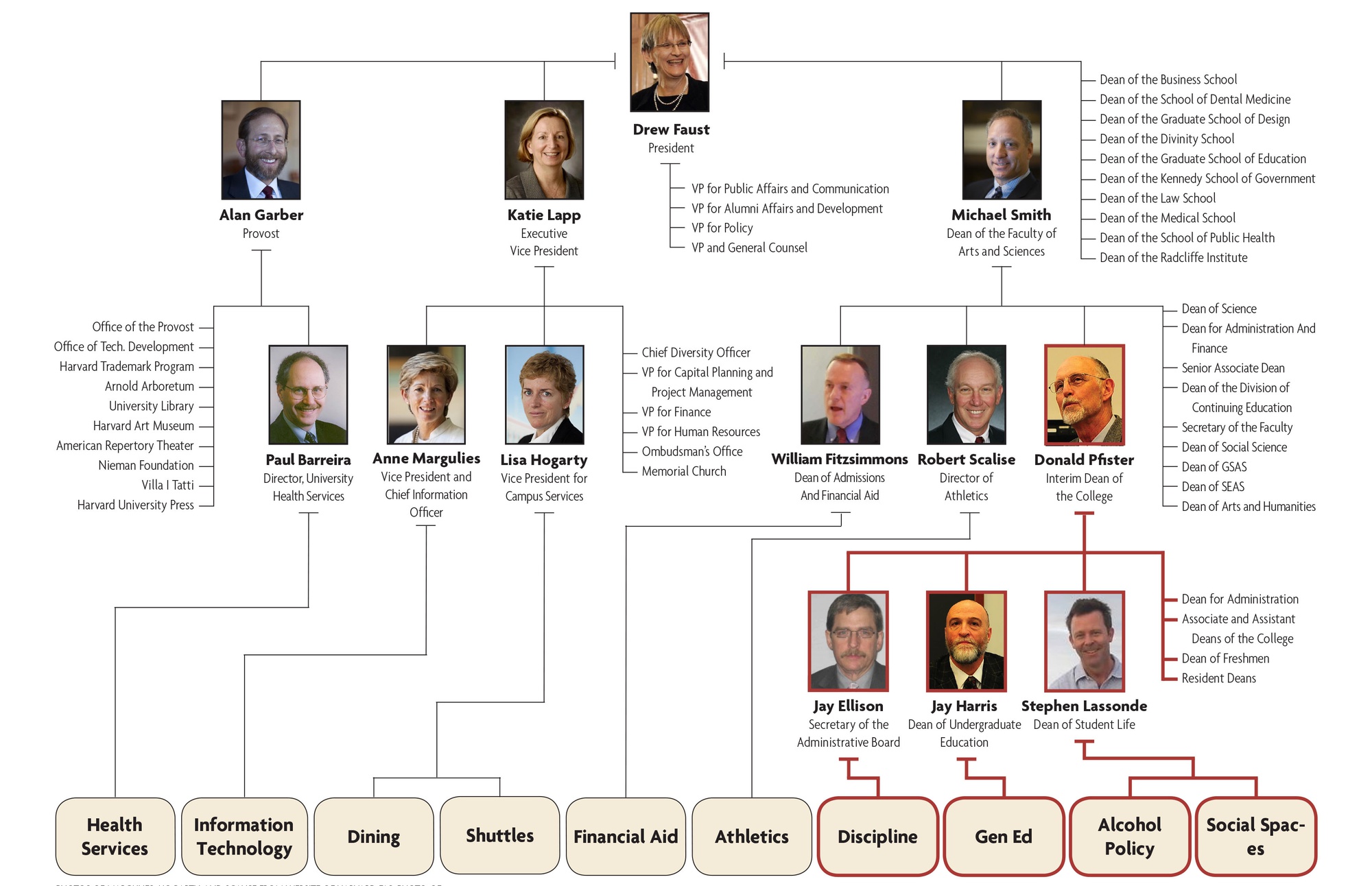 Within the next year, the man or woman whom Dean of the Faculty of Arts and Sciences Michael D. Smith names as the 19th Dean of Harvard College will take charge of 6,700 undergraduates and a host of employees and administrators. But despite the breadth of this charge, the new Dean will find that many of the aspects of University life most relevant to the student body do not fall directly under his or her control.

Admissions and financial aid, along with all undergraduate athletics, are overseen by other deans in the Faculty of Arts and Sciences, while dining services and University health services—including mental health services—report to administrators who are even higher up in the University’s administrative hierarchy.

Yet administrators say the Dean of the College is not powerless. Working within the constraints of a limited position, they say, the Dean can impact the lives of undergraduates by laying out a vision for administrative priorities, convening task forces to make recommendations about particular issues, and advocating for the College in front of University superiors.

Because the College operates within the Faculty of the Arts and Sciences, the College’s chief executive reports directly to the FAS Dean, who in turn reports to the University President. Accordingly, when high-level, College-wide decisions have to be made, they often either require the FAS Dean’s approval or are put to a faculty vote.

Interim Dean of the College Donald H. Pfister, who has said he will fill the role for no more than a year, said he consults with Smith about nearly all dimensions of his work, including the offices and departments that pertain solely to undergraduates.

And the College Dean doesn’t just consult with his or her superior—in fact, administrators said, decisions are typically made in consultation with a cabinet comprised of subordinate College deans. The cabinet, which includes administrators such as Lassonde and Administrative Board Secretary John “Jay” L. Ellison, assesses a given problem and offers recommendations, often based on consensus.

“Unlike the corporate world, this is a lot more fluid,” said Ellison, moments after a quick knock on his University Hall office door from Pfister. “We are a bunch of academics at heart, and most academics like to talk and consult before we make decisions.”

But in a system that prides itself on consultation, the College Dean often does not take a direct role in final decision-making.

“We make decisions everyday that aren’t College-wide decisions—that are just within our own unit—and he doesn’t need to get involved,” Ellison said, citing intra-unit hiring as an example of something he would try to avoid “bothering” Pfister with.

“It wouldn’t feel very collegial to me if the Dean of the College looks at a proposal and says ‘No, this can’t make the list,’ and I still try to get it to Dean Smith,” said another Cabinet member, Dean of Freshmen Thomas A. Dingman ’67. “I would not give up on it all together, but I would take it off for that year.”

The allocation of funds for the College reflects the Dean’s place within the University decision making and the web of consultation that it entails.The Dean of the College plays an active but limited role in budgetary decisions that are often finalized by administrators in FAS.

“Overall, budget discussions would take place with [the FAS Dean] because the College budget is nestled within the budget of FAS,” Pfister said, noting that while the Dean of the College has some influence in the apportionment of the funds within the College, final approval on larger allocations comes from finance officers within FAS.

Dingman similarly said that when the Freshman Dean’s Office solicits funding from the Dean of the College for a new project, some of the requests get “moved upstairs,” where FAS ultimately makes the decision.

In preparing the overall budget that will ultimately be approved by the FAS Dean, the College Dean’s primary role is to examine the budgets compiled by the College’s various deans and offices.

“Everybody always needs more than what is available, so there’s a period of reconciliation of the requests with the likely amount of budget that we have in use,” Pfister said. “It’s an iterative process; it’s back and forth.”

In addition, the Dean of the College has access to “discretionary funds,” though Pfister said that these monies are not extensive or flexible. “So far as I see it, much of it has already been committed in various directions,” he said.

Other requests, normally those requiring small amounts of funding, may also be personally approved by the Dean of the College, but Dingman said these types of budgetary decisions are rare. He named funding for freshman landscaping projects as an example of a budgetary decision about which the College Dean has complete discretion.

“We didn’t have the money to buy plants, and we went to [former Dean of the College Evelynn M. Hammonds] and said ‘If you think this is worthy, can you support it?’” Dingman said. “She thought it was a great idea and was able to find the money to help us.”

Although the College Dean’s executive power may be limited, administrators said the Dean holds enough sway to effect change.

“Just because you don’t have a lot of budgetary authority doesn’t mean you can’t influence decisions,” said former Dean of the College Harry R. Lewis, who served as dean between 1995 and 2003. Lewis added that he believes a major part of the College Dean’s role is to provide subordinate administrators with a sense of direction.

Several other administrators agreed that the Dean of the College can use his or her influence to set an agenda for other deans who directly interact with students.

“I think the dean needs to lay out a vision for the College and help people to understand what the key priorities are in a year,” Dingman said. “Those can then help all of us organize our own efforts.”

And even though it might ultimately be up to other administrators to implement the Dean’s vision, they do have deference for it. Outside of the College Dean’s cabinet of advisors, Dingman said, the Dean’s opinions are heavily acknowledged and respected in University Hall. In particular, he added, the College Dean acts as a “champion” for the College within FAS.

In many cases, the Dean’s advocacy on behalf of the College takes the shape of “working groups” or “task forces” that charge groups of faculty and administrators with investigating particular issues, according to longtime Adams House resident dean Sharon Howell.

“The power of the dean is to say ‘I’d like you, you, and you to come in and talk about this, and think about what to do about it, and make recommendations to me, and I will make a decision about what we’re going to do going forward,’” said Howell, citing Hammonds’s Working Group on Student Stress as an example.

Administrators said that throughout her five-year tenure, Hammonds was known to be passionate about inclusion and wanted to ensure that all students felt like part of the community. In fall 2010, she convened a working group to study the experiences and needs of members of the bisexual, gay, lesbian, transgender, and queer community at Harvard. That working group recommended the establishment of a BGLTQ campus space and the hiring of a full-time staff person to lead it—recommendations that translated into the now year-and-a-half-old Office of BGLTQ Student Life and the director position held by Vanidy “Van” Bailey.

Administrators said that in this way, the College’s priorities can be shaped by the characteristics of the individuals holding the deanship at the time.