Making the Pick: A Retrospective on Searches for the Dean of Harvard College 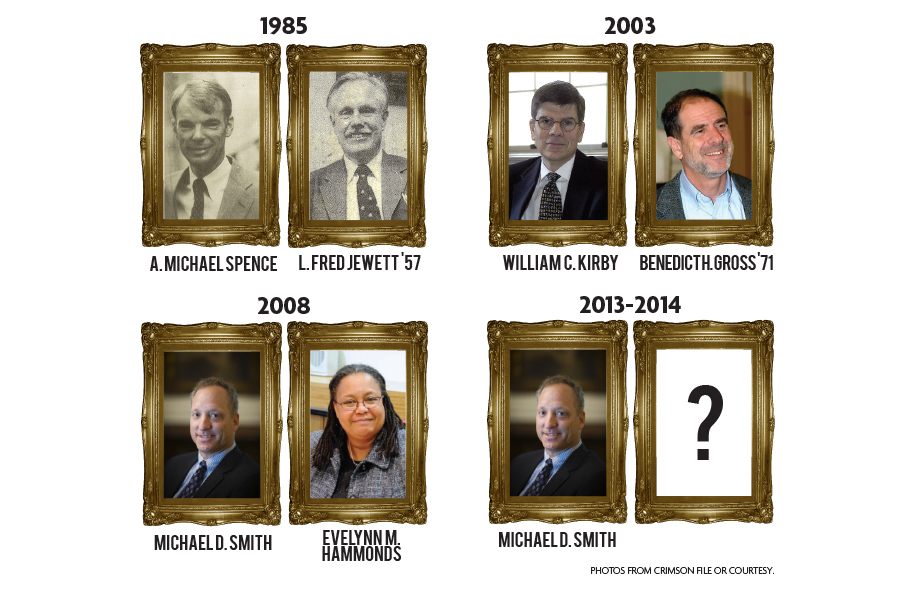 Above, Deans of the Faculty of Arts and Sciences (left) and the Deans of Harvard College whom they selected (right)
By Matthew Q. Clarida, Crimson Staff Writer

Last week, Dean of the Faculty of Arts and Sciences Michael D. Smith led a lively discussion in Lowell House about Harvard’s ongoing search for a new leader of its flagship school.

Flanked by six members of the advisory committee he convened in September to assist him with the process of picking a new College Dean, Smith took questions from an audience of about 25 students.

“This is extremely important from our perspective to get out and hear from students about what you’re thinking,” he told the students before beginning a discussion that lasted about 75 minutes and touched on topics ranging from final clubs to the experience of students living in the Quad.

In both the current search and his 2007-2008 search for his first College Dean pick, Evelynn M. Hammonds, Smith has publicly sought to put student engagement and the work of advisory committees at the center of the search process.

While historically there has been no one-size-fits-all process to selecting the College Dean, Smith’s consultative approach represents a significant tactical shift from that of his predecessors, some of whom were criticized for not attempting a broad consultation with the Harvard community when making their appointments.

Yet in other aspects of the College Dean search, Smith has followed historical precedent. In the 2007-2008 search, Smith continued a legacy that has seen FAS deans use their near-singular authority to majorly influence the structure of the College administration during the turnover of its leader. Today, it remains to be seen if he will do so again.

When then-FAS Dean A. Michael Spence set out to replace Dean of the College John B. Fox Jr. ’59 in 1985, he appointed an advisory committee to help him with the work. He delegated to the committee the early groundwork of the search, including the preliminary interviewing of applicants and the reading of applications.

But Spence took over later in the process, interviewing the finalists on his own, according to a 1985 Crimson article, and eventually selected L. Fred Jewett ’57.

“My recollection is that it was a more informal consultative process, thorough, but not a full search committee,” Spence wrote in an email to The Crimson last week.

Spence was not alone in making the appointment a primarily executive decision.

Former FAS Dean William C. Kirby also favored a more internal approach to College Dean searches when he made his selection in 2003. Although a committee was established to evaluate new responsibilities for the Dean of the College, Kirby appointed the new College Dean, then-Dean of Undergraduate Education Benedict H. Gross ’71, before the committee ever met.

Gross, who now heads the Department of Mathematics, remembered a brief search process, with little consultation of the community at large—a contrast to what he has observed in Smith’s searches.

“Mike [Smith is] conducting a very elaborate process,” Gross said in an interview last month. “When I was appointed, I think Bill Kirby just thought about it for a few weeks, called people in for interviews, and asked me if I wanted to do it.”

After Kirby was criticized for his lack of broad consultation before he appointed Gross in 2003, Smith in 2008 convened two search committees—an eight-member faculty committee and a 31-member panel of students from across the College—to advise him before he ultimately chose Hammonds. This year, after Hammonds’s July departure, Smith has leaned on a 21-member faculty advisory committee and scheduled three open student forums across campus, including one Thursday evening in Pforzheimer House.

"I believe that these meetings have been extremely helpful and quite productive,” Smith said in a statement to The Crimson. “The committee members and I greatly appreciate the time and honest opinions of the undergraduates. I hope the students feel that these have been successful opportunities for them to voice their ideas and experiences."

Yet Gross said that the final decision about the College Dean ultimately rests with the FAS Dean, and that, in his view, the influence of search committees is limited.

“[The committee] will sort through recommendations and come up with a short list, but ultimately [the appointment] is Mike Smith’s decision,” Gross said.

In choosing a new College Dean, some FAS deans have not just made a hire but also shaped the character of the College deanship by shuffling leadership positions within the College administration.

In selecting Gross in 2003, Kirby completed a significant restructuring of the College administration by eliminating the position of Dean of Undergraduate Education, which had been held by Gross.

As Dean of Undergraduate Education, Gross had in 2002 helped launch a curricular review that sought to internally evaluate Harvard’s academic program. Kirby said in an interview earlier this month that, by merging the two deanships and concentrating academic control in Gross, he aimed to strengthen the role of the College Dean in the curricular review.

Kirby’s decision had significant effects on not just the role of the College Dean but also the student experience in the classroom. The curricular review, which ran from 2002 to 2007, dominated Gross’s deanship. It eventually produced the General Education program, which replaced the Core as the College’s structure for distribution requirements.

Smith too has used his broad authority as FAS Dean to shape the influence of the College administration, but he has done so by embracing a model of thorough faculty and student consultation and completing an effective reversal of Kirby’s restructuring.

After Gross stepped down as College Dean in 2007, Smith opted to revitalize the position of Dean of Undergraduate Education, appointing Jewish studies professor Jay M. Harris in 2008. Smith has explained the move by contending that the Dean of the College should not supervise too wide a range of activities. He has given no indication that he has plans to make further changes to the administrative structure of the College this time around.

Musing on the model in which the College Dean also oversees undergraduate education, Smith said at the Lowell forum last week that he thinks “there is a lot to be said for somebody that is thinking about undergraduates in the entirety.”