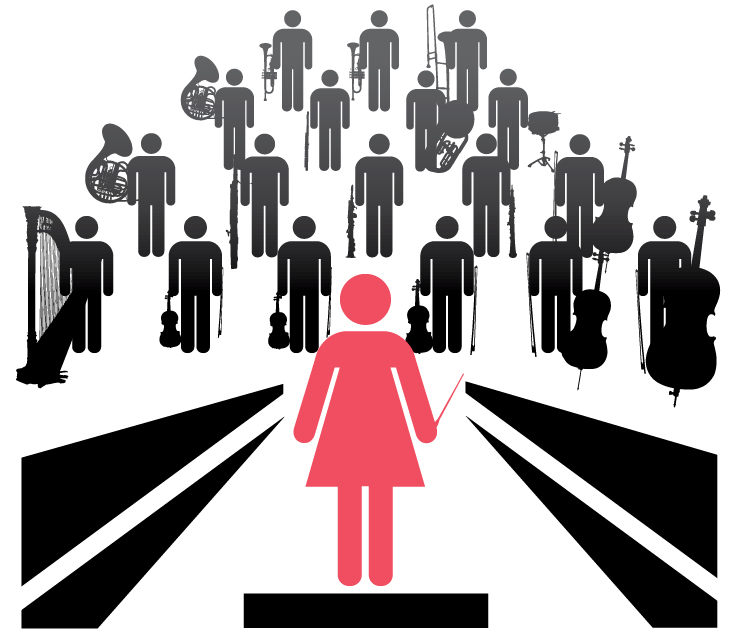 These are the words of Yuri Temirkanov, the music director of the Baltimore Symphony Orchestra from 1999 to 2006, whose interview was quoted by Alex Ross ’90 in his recent article for The New Yorker, “Women, Gays, and Classical Music.” In 2007, Temirkanov was succeeded by Marin Alsop—one of the most well-known female conductors in the world.

The gender bias shown in Temirkanov’s interview carries over to the performance arena as well. In 1982, clarinetist Sabine Meyer was asked to join the Berlin Philharmonic as one of the orchestra’s first female members. At the conclusion of her trial period, the rest of the orchestra members voted against her in an overwhelming vote of four for, 73 against. While tone contrast was cited as the original reason for the issue, many, including the orchestra’s own music director, Herbert von Karajan, insisted that her gender was what caused her dismissal.

At the same time, a study published in 1997 by Princeton professor Cecilia Rouse and Harvard professor Claudia Goldin showed that under blind audition conditions, the likelihood of a female musician advancing from the preliminary rounds of an audition increased by 50 percent, hinting at conscious and unconscious biases that continue to hold women back in the field of classical music.

Even within the Boston area itself, such a gender divide prevails—the Boston Symphony Orchestra has never had a female music director, and Harvard’s own Bach Society, whose conductors serve year-long terms, has only had two female conductors since its founding. As women’s representation in many fields approaches or even surpasses the halfway mark, classical music lags further and further behind, both in the wider music community and at Harvard itself.

But though it has a ways to go, the music world has improved vastly, according to one professional. The director of piano seminars at the New England Conservatory Preparatory School and the namesake of the Angel Ramón Rivera Piano Competition, Angel R. Rivera has been on both ends of the audition process and has witnessed such an improvement personally.

“I have hired so many women conductors. It is unfair that today, women in top positions have to be so much more qualified than men,” Rivera says. “One of the most influential people in my life was Lorna Cooke deVaron, my co-conductor at NEC—I have never learned so much in my entire life.”

As Rivera continues to push for women’s equality in music—commissioning pieces by female composers and constantly striving to expose his classes at the NEC Preparatory School to female performers and composers—he recognizes that the state of women in music is much better than it used to be. “While it absolutely still is a problem today, women in orchestras used to be almost unheard of. The gender divide in music has improved so much over the past 30 or 40 years.”

In many respects, opportunities for women in classical music have indeed improved at Harvard and in the greater Boston area. The compositions of Harvard’s three main orchestras today—the Harvard-Radcliffe Orchestra, the Bach Society, and the Mozart Society—all have near-equal distributions of men and women, as does the Boston Symphony Orchestra. Harvard’s own Music Department also shows balance between the genders. Although only one of the eight music concentrators is female, the majority of joint concentrators and students pursuing secondaries in the field are women —four of seven and eight of 11, respectively.

However, the gender equality is only skin deep. Even within Harvard’s orchestras, a closer analysis of the numbers reveals instruments weighted by gender. Instruments such as the double bass and horn section tend to be very male-dominated at Harvard and beyond, with HRO’s trumpet and trombone sections being entirely male. For other instruments, such as the flute, the players are mostly female. Harvard’s statistics are in keeping with the professional musical world and may even be slightly better: the Boston Symphony Orchestra’s gender divide in instruments is even more polarizing, with only men in the basses, oboes, trumpets, trombones, percussion, and clarinets.

This gender divide seems to stem not only from subjective auditions but also from a lack of gender diversity in the auditionees, implying that the gap begins when children decide what instrument they want to play. According to a 2008 study done at the University of London, historically, girls have consistently chosen to study instruments that are smaller and have higher pitch, while the boys tackle the heftier, deeper instruments.

Adela H. Kim ’16, who is currently comping The Crimson’s Arts Board, comes from a family of musicians. Her father, a pianist, and her mother, a violinist, both went to Juilliard, as does her sister, who is studying the violin. Kim plays the clarinet, an instrument typically dominated by male players, and was admitted to the joint Harvard-NEC program after studying at the Juilliard Pre-College for seven years. However, the clarinet was not her first choice.

“When I was little, I really wanted to play the piano, but my father told me, ‘People out there don’t respect women pianists,’” Kim says. Entering Juilliard Pre-College in seventh grade, Kim was one of the only female clarinetists in the school and her teacher’s only female student. When it came time to compete and audition in a male-dominated field, Kim had to worry about aspects of the audition that wouldn’t concern her male colleagues.

“For auditions, we’d always go and find a nice long dress—we’d play up the fact that I was a woman,” Kim recalls. However, she always took care to ensure that her outfit would serve as no detriment to her audition process.

“My father served as a juror for many music competitions and auditions, and he would bring home stories of how wearing too much makeup or a dress that was too short could make or break the audition,” Kim says. “There were so many more factors that affected women that didn’t affect men.”

Women may lag behind men in musical performance, but the field of conducting is far more severely skewed. Even within Harvard, the invisible barrier stands. Since its inception in 1954, the Bach Society has only had two female music directors: Diana L. Watt ’81, who served as the orchestra’s music director from 1981-1982, and Grace M. Kao ’01, who served from 2000-2001. HRO’s recent trends also concur: at least since the arrival of Federico Cortese, the music director of HRO for its fifth consecutive year, the orchestra-chosen assistant conductor has always been male even though most of the leading players are female. Cortese, who is the conductor of HRO and is a senior lecturer in the Music Department, is also concerned with the gender gap.

“Historically, women artists have always been a tiny minority for social reasons. Most of these reasons are thankfully—if slowly—disappearing,” Cortese says. Yet stark divisions still remain; Cortese mentioned that for HRO, the applicants for the position of student conductor were disproportionately male in the past five years.

“Conducting is still a field where the imbalance is very clear. There are certainly increasing numbers of very prominent women composers. I would not say however that the numbers are even yet,” Cortese says. “There are much fewer women conductors than men, no doubt about that. Why that is so, I don't know. I guess it is a profession that has come for a long time with a sort of stereotypical ‘macho’ image.”

Cortese has conducted many of the great orchestras around the world, including serving as assistant conductor of the Boston Symphony Orchestra. He teaches a spring conducting class at Harvard, enrollment in which requires an audition. Last year, out of the 12 aspiring conductors who auditioned for entrance to the class, three were female, and one was chosen for the six-person class: Jessica D. Rucinski ’14.

Rucinski is pursuing a secondary in music to accompany her concentration in physics, and she has been involved with nearly all of the major music groups on Harvard campus, from DJing for the classical music board of WHRB to serving on the board of the Harvard Early Music Society. Rucinski started piano at the age of six and sang in choirs from second grade onward. She cites her initial interest in conducting as originating around the age of 13 due to her frustration with a bad choral director. “I would think, ‘If I were the conductor, this is what I would do to make it better,’” Rucinski says, adding that while most choral directors in her experience were female, this drastically differs from the rest of classical music. “We have these biases that we don’t even know about—we say ‘Oh, it’s totally fine for a woman to be a conductor, we’d totally hire her,’ but in practice, it’s not true.”

In conducting class under Cortese, Rucinski says she was never treated any differently than the male students in the class. “It wasn’t about my gender—the problems [Cortese] worked on with everyone were their own specific problems,” she says. However, Rucinski is still concerned about the vast gender gap in conducting, the persistence of which she partially attributes to a lack of female role models in the industry.

“I recently read an article about why more girls don’t do science, and it’s because there aren’t female role models that they can look up to. The same applies to conducting,” Rucinski says. “If, when I was younger, I had thought I, as a girl, could have been a conductor, maybe things would have been different.”

NOTES ON THE PAGE

“My teacher, Alla Cohen, has a very dominant personality and has always encouraged me to keep going with composing, especially at times when I was trying to choose between [playing] piano and composing,” Rabinowitz says. “My mother was a harpsichordist and a pianist, and as piano has played a large part in my life—I’ve been playing piano for the past 15, 16 years—she’s someone I really look up to.”

As a female composer at Harvard, Rabinowitz is in the minority. Out of the 14 more active members of the Harvard Composing Association (HCA), four are female. However, last year’s two co-chairs were both women.

For Rabinowitz, her status as a minority in the classical music world is invigorating, not discouraging. “It’s empowering to be one of the few female composers,” she says. “It’s a unique niche.”

Attached to the rich historical tradition of classical music is a tradition of excluding women. Gustav Mahler, for example, forbade his wife, Alma, from composing. Such tendencies even pervade the very language of music: in music theory, strong cadences used to be styled “masculine,” while weaker cadences were given the title of “feminine.” Today, however, those terms are falling out of favor, as are the gender biases of which they are indicative.

While the classical music communities both at Harvard and at large have come leaps and bounds from the completely male-dominated world of old, music still has strides to make for complete equality. But with active and ambitious up-and-comers in the musical world, what was once a male-dominated field is increasingly populated by female performers, composers, and conductors.

Concert pianist Yuja Wang, who gave a talk at Harvard on Friday, is one such artist. “The kinds of people that tend to do really well in this type of career are women who have masculine sides and men that have feminine sides. I guess being androgynous is the way,” she says. “People say it is harder for women because of the physical aspect—we have big programs and small hands, and it takes a lot of stamina. But I don’t work out—I just play my concerts and it is fine.”

—Staff writer Layla Siraj can be reached at layla.siraj@thecrimson.com.