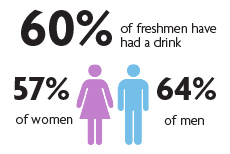 Part IV of a four-part series on Harvard’s incoming Class of 2017, based on data collected by The Crimson in an online survey conducted in the month of August. Part I ran on Tuesday, Part II ran on Wednesday, and Part III ran on Thursday.

They scored well on the SATs, but it appears Harvard freshmen aren't quite as good at scoring in bed.

Only 35 percent of the Class of 2017 had sex before coming to Harvard, according to a survey of incoming freshmen conducted by The Crimson last month.

Recruited athletes seem to be having better luck: 53 percent of them said they have lost their virginity. In comparison, only one third of incoming Harvard freshmen who were not recruited to play a varsity sport reported that they have had sex.

Sexual activity was just one of a range of topics explored in The Crimson’s email survey of the incoming freshman class. The survey drew 1,311 respondents—nearly 80 percent of the Class of 2017—although not all of them completed every question on the survey. Exploring beliefs, anxieties, habits, and vices, the final installment of a four-part series on the survey’s results looks at how the newest members of the Harvard community live their lives when they are not building their resumes.

Respondents who identify as homosexual or bisexual are more likely than their heterosexual counterparts to report that they have lost their virginity. Forty-five percent of homosexuals and 56 percent of bisexuals reported having sex versus 35 percent of heterosexuals. Of those freshmen who say that they are questioning their sexuality, only 20 percent said they have had sex.

Among surveyed freshmen, self-reported sexual history also differed between religions. Mormons, Hindus, Muslims, and Protestants reported the least sexual activity, with 0, 16, 25, and 28 percent respectively saying they have had sex. According to the survey, half of Jews, 38 percent of agnostics, 36 percent of atheists, and 34 percent of Catholics have lost their virginity.

Males, on average, reporting having had more sexual partners than females did—1.95 for the former and 1.70 for the latter. Seven men claimed to have had sex with 10 or more people, but were excluded from the averages of sexual partners.

The Class of 2017 arrives on campus in the wake of a year that saw students call for reforms to the University’s mental health services.

As Harvard increasingly encourages its undergraduates to utilize the University’s growing mental health services, the vast majority of incoming students who were surveyed—87 percent—said they have never sought mental health counseling. Among those who have, most said they come from middle- and upper-class families. Twenty-one percent come from the survey’s highest income bracket—a combined parental income of more than $500,000 a year—and 61 percent come from families with an income of $125,000 a year and higher.

Even less likely to say they have attended counseling are those who plan to compete on Harvard’s athletic fields and courts. Eleven percent of those who identified themselves as athletic recruits said they have been to counseling, compared to just 7 percent of prospective varsity walk-ons.

According to Freshman Dean Thomas A. Dingman '67, survey data collected by the Freshman Dean’s Office through alcohol.edu, an online alcohol prevention course completed by incoming freshmen, has found that about 70 percent of undergraduates do not identify as drinkers before arriving in Cambridge. But The Crimson’s survey indicates that members of the Class of 2017 are not strangers when it comes to booze.

Along religious lines, the Class of 2017 is noticeably more divided. Thirty-two percent of respondents described themselves as either atheist or agnostic, while 42 percent identify as Catholic or Protestant and 9 percent as Jewish. Smaller percentages identify as Muslim, Hindu, Buddhist, or Mormon.

Microsoft may have roots in Cambridge, but it seems that in Harvard Yard, Apple is king. Sixty-eight percent of surveyed incoming freshmen said they own a Mac, and 70 percent said they have an iPhone.

And like many millennials, it seems that incoming Harvard freshmen spend a lot of their time using social media. Ninety-seven percent of those surveyed said they have Facebook accounts, and 47 percent said they have Twitter accounts. Respondents reported spending significantly less time on Twitter each day than on Facebook. Among those who have Twitter accounts, the majority reported spending fewer than 15 minutes a day on Twitter, and half of those with Facebook accounts said they spend more than an hour each day on the site.

The interactive feature accompanying this article has been revised to reflect the following correction:

Due to an editing error, a graph in an earlier version of the interactive feature accompanying this article incorrectly stated the percentage of respondents who reported having had sex. In fact, that figure was 35 percent, not 65 percent.